Read on Twitter
At a training course which I attended a few years ago, the course facilitator told us a story which went a little something like this…
An experiment was set up by putting 5 monkeys into a room which had a trapdoor in the roof.

In the centre of the room, directly below the trapdoor, a ladder was placed.
The scientists then lowered a banana from the trapdoor in the roof. Immediately, one of the monkeys spotted the banana and headed up the ladder.

As soon as this happened, the scientists sprayed all the monkeys with ice cold water. The monkeys were obviously less than impressed.
A few hours later, a banana was again lowered through the trapdoor, and once again one of the monkeys headed up the ladder to grab it.

All the monkeys were again given a dose of the cold water.
It didn’t take long before some of the monkeys realised how this worked - and so the next time a banana was lowered and a monkey headed up the ladder toward it, they pulled the culprit down and gave them a proper beating.
Eventually all of the monkeys learnt not to go up the ladder, regardless of how tempting the banana looked.
Next, the scientists decided to mix things up a bit by replacing one of the monkeys in the room with a new monkey.

Obviously this new monkey had never experienced the cold water water or the beatings, and as soon as the banana was lowered, he headed straight for the ladder.
The other monkeys saw the new monkey heading for the ladder, and they immediately stopped him and beat him up.

It didn’t take long for the new monkey to learn that the ladder was not be climbed, even though he had no idea why.
Next, another of the original monkeys was replaced.

When this new monkey saw the banana being lowered, he immediately headed for the ladder.
The new monkey was of course stopped and beaten up.

But something really interesting happened - the first replacement monkey also joined in on the beating, even though he had no idea why he was doing it!

Clearly, that’s just how things are done around here?
And so this new monkey quickly learnt that the ladder was not to be climbed.

The scientists then continued replacing the original monkeys with new monkeys, until none of the original monkeys remained.
In other words, the experiment reached a point where no monkey in the room had ever been sprayed with cold water (they had never reached the ladder because they were always beaten up before getting there).
The monkeys just accepted the fact that if you tried climbing the ladder you got beaten up.

Even though they never knew why, they accepted that that was just the way it worked.
Worse still, the monkeys also knew that if you see someone else trying to climb the ladder you give them a proper beating.

Why?
Because that’s just the way things are done around here!

---
I found the story really interesting, and there are a few good lessons in it.

I think the reason the story has stuck with me after all these years is because I keep see people acting like the monkeys in the experiment.
Perhaps the most prevalent mindset of “that’s just the way things are done around here” is in the way people approach their working careers and retirement saving.
Society tells you that you start your working career, and you do your 40 hours per week for somewhere around 40 years, and then you get to call it day. Everyone just seems to accept this.

Why?
“Because that’s just the way things are done around here.”
As we run on our hamster wheel, we are told to save 10-15% of our income, so that when we stop running at around age 60/65, we should have enough money to see us through our golden years.

Why?
“Because that’s just the way things are done around here”.
Everything seems to tell us to accept that retiring at 55 or older is the only way.

It's all over - RA products locking your money away until you're 55, legislation which charges higher tax for accessing money before 55, and even in some of the online retirement calculators 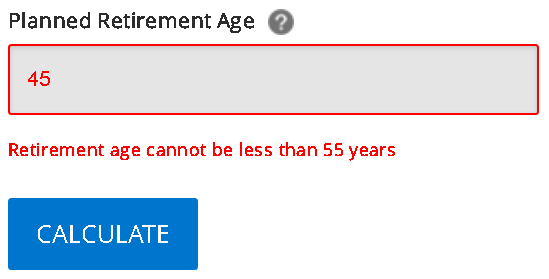 And so many people continue down the same path which thousands have walked before them, without even blinking an eye.

We don't seem to realise that there are only a very limited number of hours in a day, in a week, in a year, and in a lifetime.
Shouldn’t we be spending as many of those hours on only the activities which we find the most interesting, fulfilling and meaningful?
Granted, there are some people who wake up every weekday morning, and for the next 40 years (and probably beyond) would choose nothing else other than to go and do their current job.

But these are a very select few.
For everyone else, I can’t help but wonder why we are happy to accept a job we don’t necessarily enjoy doing which, for decades of our life, will constrain us in the amount of time and energy we have for other far more meaningful pursuits.
Things like family, travel, and learning take a back seat while we grind it out decade after decade to cover our (mostly unnecessary) expenses in the hope that when we retire from our work careers, we will have something that can see us through to our retirement from life.
Why is it that everyone accepts this?

Is it because “that’s just the way things are done around here”?
You can follow @stealthy_wealth.
Tip: mention @twtextapp on a Twitter thread with the keyword “unroll” to get a link to it.