Read on Twitter
1. This thread is about "Process of Creation" as told in the kritis of Karnataka HaridasA-s. Content is taken from V. Badarayanamurthy's book published in 1999 by Dasa Sahitya Project, TTD & paraphrased. Note that this is a highly abridged version & hence incomplete. 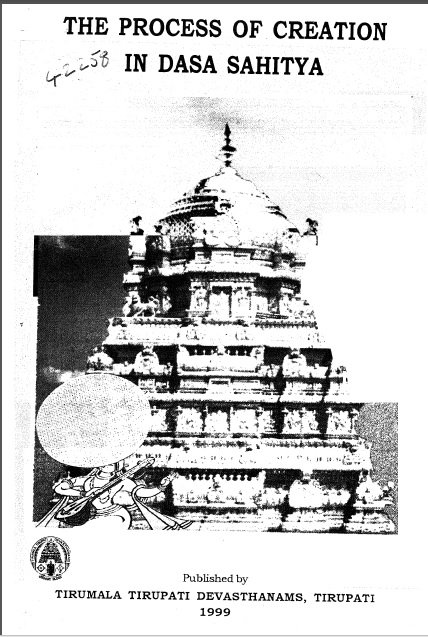 2. Before I touch up on the core topic, wish to quote the following Vedic verse that forms the very basis of this presentation:

"धाता यथापूर्वं अकल्पयत् - Brahma created as before."
3. The Dharmik view of the creation is that the making of this universe goes into cycles that run for a specific number of rotations before it become dissolute. Thus, Dharmik scriptures suggest a long-drawn, step-by-step process of creation including 'evolution.'
4. "kalpakShayE punstAni kalpAdau visRujAmyaham" - This line from 9th chapter of Bhagavadgita supports the Creation-Dissolution of the universe between which the Sustenance supported by 'pariNAma' [evolution] is maintained.
5. At the beginning of the Creation, Vishnu bestows Brahma with Vedic knowledge. Veda appear in two forms (1) alphabet (physical form) & (2) transcendental (metaphysical form). With this knowledge, Brahma starts his part of creation after Sri Hari's rudimentary creation.
6. At the time of dissolution, the physical form of Veda i.e. 'alphabet' gets dissolved in the 'transcendental' form which in turn enters into the 'buddhi' of Vishnu only to get revealed to another Brahma in next kalpa.
7. With this background of Creation & Dissolution, let us see the happenings that occur before the Sustenance of creation. In knowing these developments, the writings of HaridAsA-s in Kannada are of immense help. But these writings have not been explored thus far!
8. Beforehand, one must understand that the 'Time' is the 'Cause' for creation, sustenance & dissolution. See the chart. Thus every step in the Creation has a 'Time' as a cause that can be 'scaled' up to its minutest fraction. Thus, brahma kalpa is the timeline set for creation.

9. First let us understand the Dharmik view of Dissolution of the creation. Here are suLAdi-s [versified prose] of Guru Purandaradasa [s/of Purandaradasa] & Vijayadasa that describe the fierce visuals of Maha Pralaya. 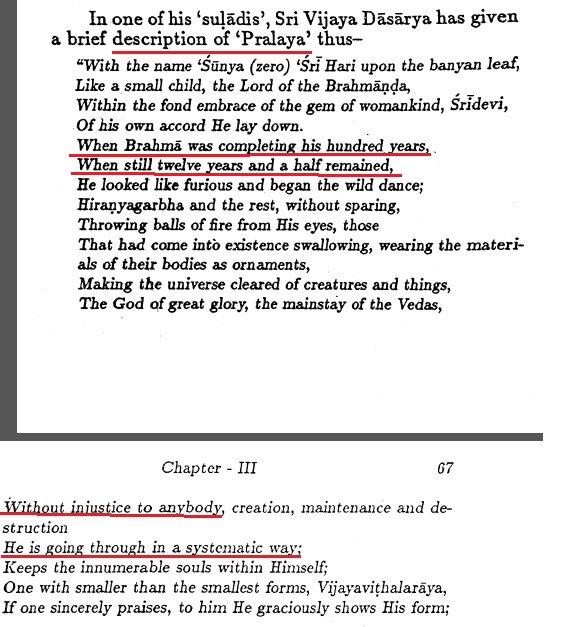 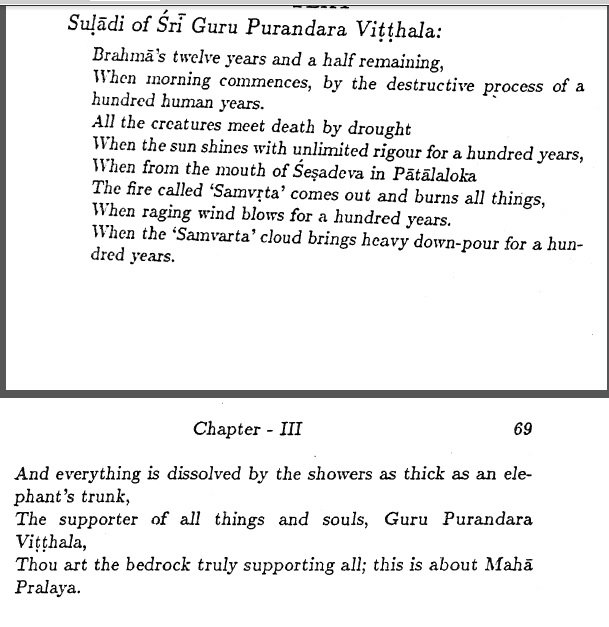 10. So far this praLaya is limited to the dissolution that takes place within the brahmAnDa [Universe]. After this, the process of dissolving the outer 9 layers [navAvaraNa] begins. Here is an a/c narrated by Guru Purandaradasa. 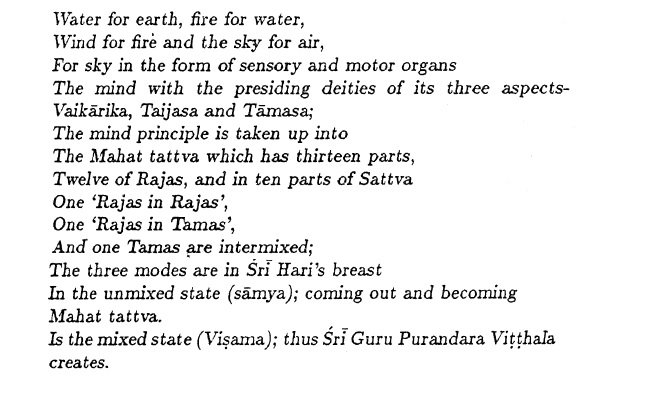 11. In nutshell, Dissolution or praLaya is a reverse process of creation wherein the 'manifestations of grosser material merge into subtler & subtler ones merge with Avyakta, the original state of all beings.' Here is Vadiraja Tirtha's description: 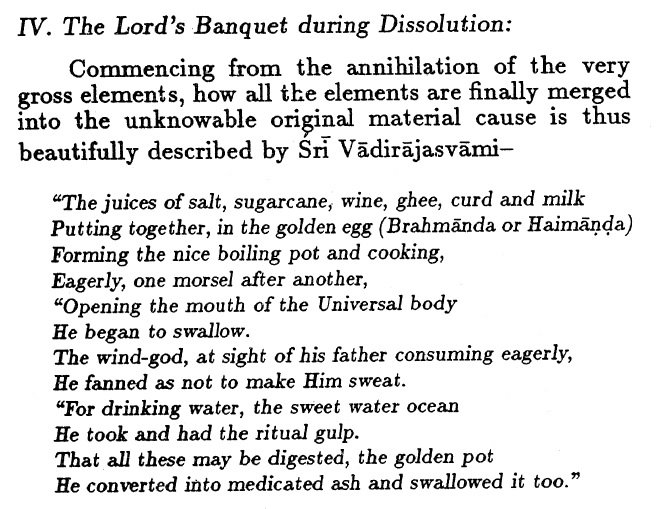 12. It must be noted here that the annihilation of the universe doesn't mean the total destruction. Only the 'gross matter' gets wiped out & the 'spirit soul' of the mortals dwells into the womb of Srihari. These souls are the 'seeds' that will be sowed in next cycle of creation.
13. Now comes a period of lull called as 'yOga nidra' of Hari that lasts for 100 years. In first 87.6 years, Hari sleeps merrily as a little child on a banyan leaf. On completion of this period, Lakshmi takes form of "ambhraNI' & sings 'shRutigIta' asking Hari to get up.
14. Vadiraja describes the 'benefits of creation' as below:

"This is sport for Him, to Lakshmi it gives-the wealth of might joy-to the jIvAs, good, bad & mediocre results; Therefore He create this wonderful universe."
15. The unrecognizable casual matter [avyakta], praNava [OmkAra] & kAla [Time] are the three eternal things with which Hari readies Himself to 'creation.' Alongside, Lakshmi & souls too are eternal.
16. At the beginning of the creation, praNava expands into Vedas. avyakta tattva takes several forms but to start with expands into 3 characteristics i.e. sattva, rajas & tamas. A 'changeless sky' called avyakta-AkASa provides 'space' for triguNa-s, jIvA-s & praNava to stay.
17. There are 4 types of creation - (1) Self-creation [Atma sRushTi] (2) Assisted-creation [parAdhInAvApti sRushTi] (3) Contact-creation [miShra sRushTi] & (4) Gross-creation [kEvala sRushTi].
18. Self-creation is all about the several incarnations of Sri Hari which, like a lamp lit out of another & another & another, appear for the benefit of the dEvA-s & jIvA-s.
19. Assisted creation [parAdhInAvApti sRushTi] is a process wherein Lakshmi takes as many forms as that of Sri Hari such that She can assist Him. Like a reflection, Lakshmi follows Hari in various forms.
20. Third in series is called Contact creation [mishra sRushTi] in which the souls will be brought into contact with the 'matter' such that they can gain 'worldly experience.' Sri Hari, who dwells both in spirit of the souls & the 'matter' binds them w/o involving Himself.
21. The process in which the primeval matter is modified to become various 'new things' is called Gross creation [kEvala sRushTi]. For e.g. mud is needed to create pot & the 'creation' of mud is called kEvala sRushTi.
22. As part of kEvala sRushTi, another process called "vikRuta sRushTi" takes place in which the basic materials i.e. sattva, rajas & tamas will be mixed with mahat-tattva such that the 'brahmAnDa' [Universe] with all its inner worlds can be created.
23. The division of endless Time which is also an eternal factor for creation is part of kEvala sRushTi. This Time will be broken into bigger & smaller scales that can be measured. This division is to help the jIvA-s to know 'auspicious' & 'inauspicious' moments for doing karma.
24. Having thus set the primeval elements, space & time, Srihari gets into rudimentary creation. Linga SarIra [causation body] is created for jIvI-s. dEvata-s such as Brahma, Vayu, Saraswati etc. are created with 2 yrs gap between each such creation. See the chart. 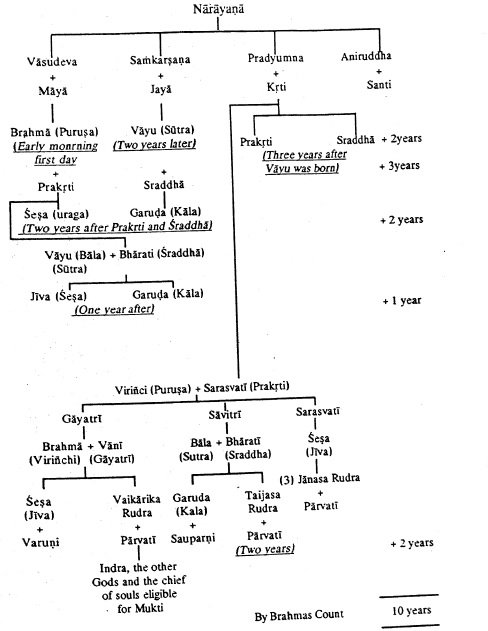 25. Demigods & angels take birth from tattvAs such as mahat, vignAna & ahankAra etc where 'tattva' means a particular 'principle.' 24 such tattvas or principles give rise to various demigods & angels with varied wisdom, power & spiritual capacities.
26. Alongside jIvIs, creation of elements takes place. Sky, air, fire, water & earth are created for the benefit of jIvIs. Then relationship between the organs & the elements is established. Likewise, by inter mixing of various elements, all that's needed for universe is created.
27. The greatness & usefulness of the elements is thus described by Vijayadasaru: 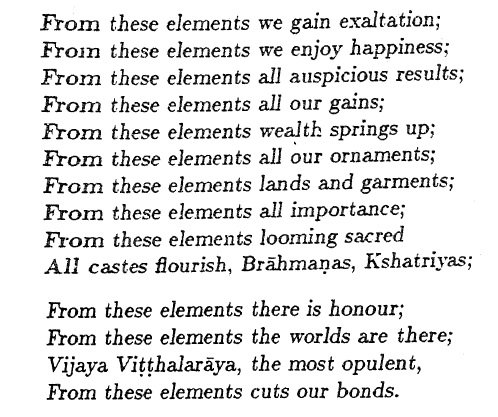 28. To summarize the process of creation from Dharmik standpoint, it becomes clear that the narratives show a methodical growth of the universe where the primeval elements are being put to use by chEtana [sentient being] called Parabrahma.
29. In other words, the Darwinian notion of 'organisms on earth are related to unknown ancestral types' has been clearly demonstrated by Vedic seers with how, when, where & what type of processes got involved in the creation & evolution of present universe.
30. The 'multiple branchings' of living organisms mentioned by Darwin is not so different from the table shown in Tweet 24. Similarly, the 'natural selection' too is well demonstrated in Dharmik creationism.
31. To conclude, the Dharmik scriptures & their seers have not left the process of creation with IFs, BUTs or COULD BEs. Instead, they have described the whole process on a precise timelime that can be broken down to a nano-second. 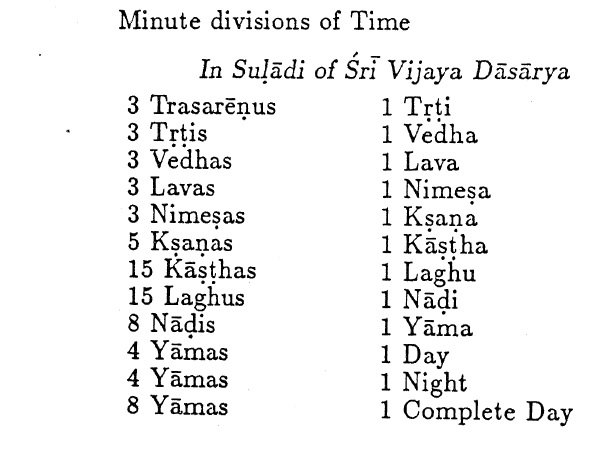 32. The Divine Seers could even tell the types of 'origin of species' & also could calculate how many species exist in an universe. 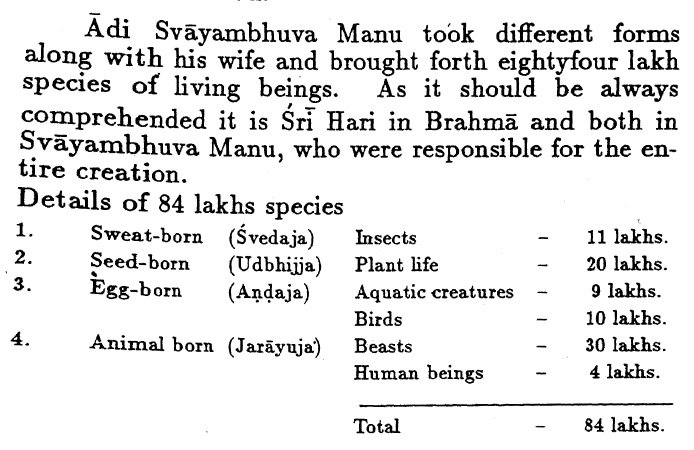 33. Please go through the links to the interview & an episode of "Cosmos" documentary wherein the famous science populariser Carl Segan ratifies the accuracy of Vedic creationism.

//END//
You can follow @MadhvaHistory.
Tip: mention @twtextapp on a Twitter thread with the keyword “unroll” to get a link to it.