Read on Twitter
A Congressional hearing on the FAA's role in spaceflight has begun. Livestream:

Thread:
. @RepGarretGraves opens by noting that in 2011, the FAA's spaceflight office (AST) licensed "only one single commercial space launch" but "now routinely licenses a launch a week or more," with only a marginal increase in staffing.
. @RepPeterDeFazio in opening remarks says he is "not in favor of telling people in America" traveling via commercial air that a flight was delayed "because some millionaire or billionaire is going to experience 15 minutes of weightlessness."
In conjunction with Director Krause's testimony today, the GAO releases recommendations for the FAA, including to "address weaknesses in FAA’s methodologies for evaluating and calculating potential third-party losses from launch and reentry mishaps."
https://www.gao.gov/assets/gao-21-105268.pdf
Monteith: "Spaceports aren't just for takeoffs and touchdowns. They are also economic and technology hubs just waiting to become a success story."
Monteith: The FAA is "actively working on solutions to the issue of how commercial space will continue to grow alongside" commercial and general aviation.
Krause notes that the FAA's efforts to adapt to the growth of the commercial space industry "are promising, but full and efficient integration of all users of the national airspace system is years away and will require continued to work and focus."
Rep. DeFazio notes that the FAA has been talking about the Space Data Integrator since 2016.

Monteith: "We expect in the next few months to have the first operational test of it," with the system working in a "shadow mode" currently.
DeFazio asks about SpaceX launching Starship SN8 without FAA authorization:

Monteith: "We would not have cleared them to start flight operations again had I not been confident they had modified their procedures effectively and addressed the safety culture issues that we saw."
Monteith: "With 3 companies likely flying commercial spaceflight participants this year, and a 4th next year, I think the landscape is changing and I think it's important that we look at some of those restrictions or in this case the moratorium" on the FAA's regulating authority.
Monteith: "If we want to stay the world leader in this transportation sector, innovation is critical – just like STEM and diversity is as well. I oversaw the first 23 [SpaceX] booster landings and I can tell you, personally, it is a game changer."
Monteith: "These companies, while they are trying to go quick, they are safe. In the heart of their business, they are concerned about safety. If [the FAA gets] any inkling that they're not concerned about safety, that's when we step in."
Monteith: "The FAA licensed 404 commercial launches since our inception, and we have never had a fatality or ... injury to the uninvolved public."
Monteith: "And that doesn't mean things haven't gone wrong – about 15% of our flights, we declare a mishap ... sometimes it's very spectacular, that you'll see across the internet, but what every single one of those mishaps has in common is they failed safely."
Rep. @kaikahele asks how Hawaii could play a part in commercial spaceflight.

Monteith: "I would love to see a spaceport in Hawaii, just personally ... with plenty of coast like Hawaii has, it could potentially support a spaceport operation."
Written testimony filed by @csf_spaceflight president @karina_drees in conjunction with today's hearing, advocating for more funding and staffing for the FAA's AST: 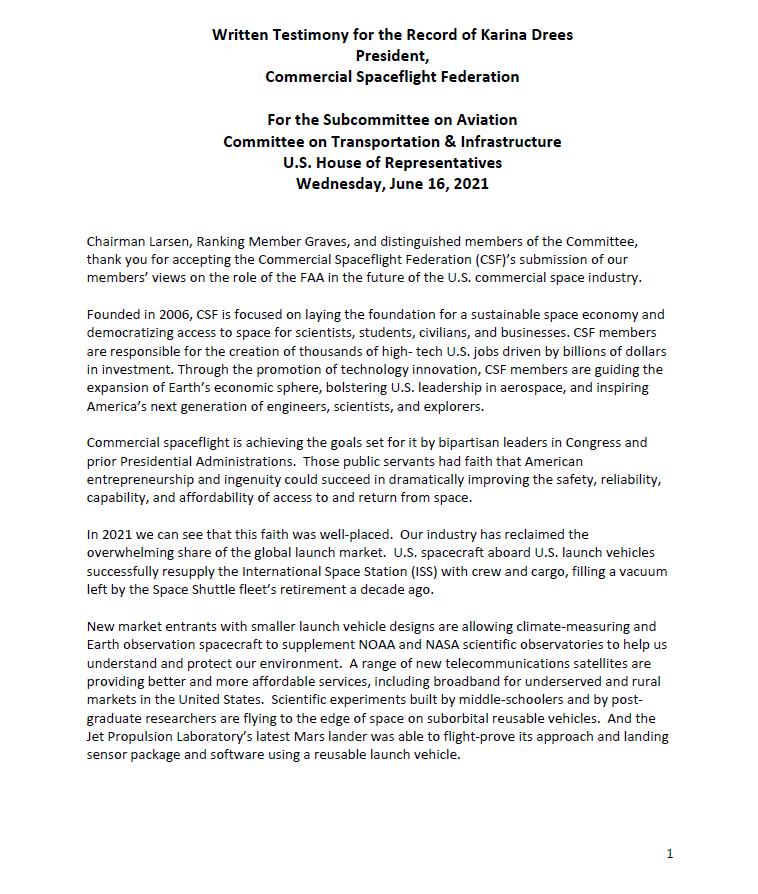 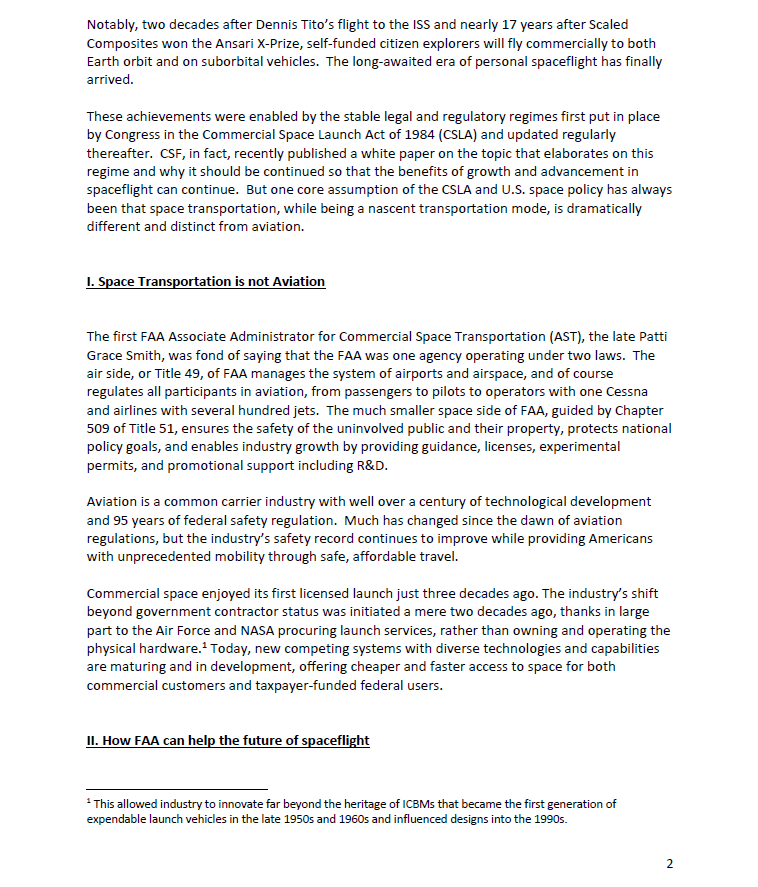 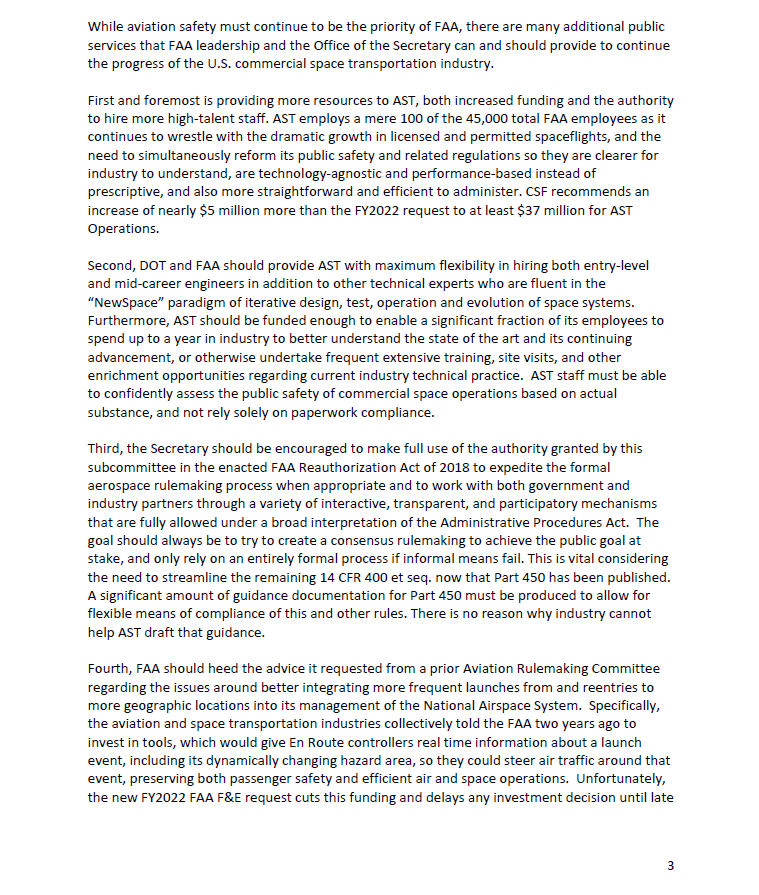 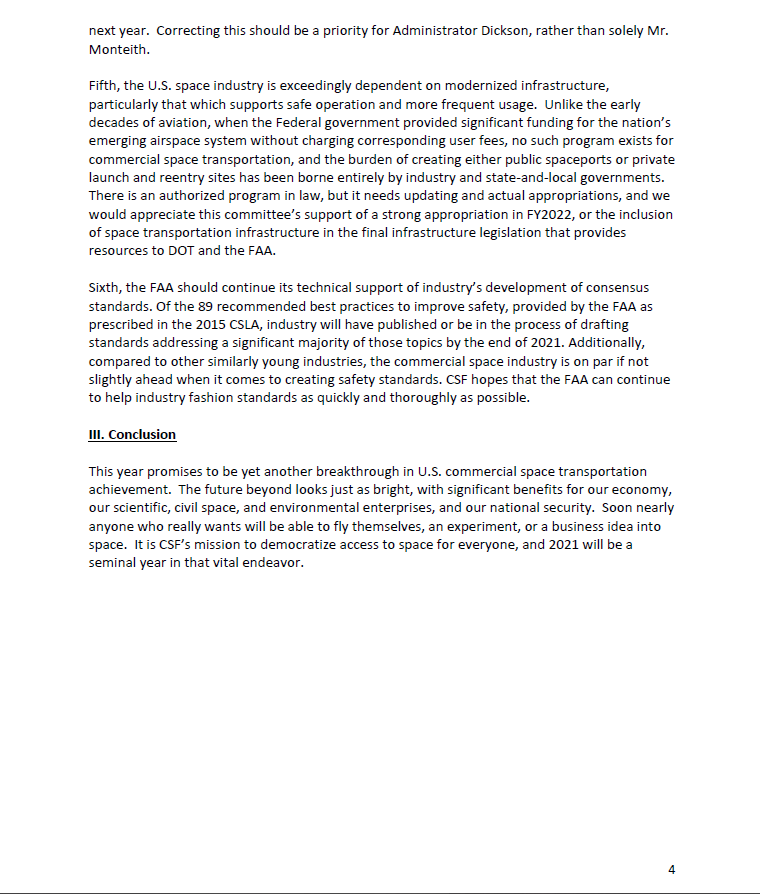 The first panel ended but the hearing is now in recess for an undetermined time.
After a more than 2 hour recess, the hearing is continuing.
Bruno: "I am happy to report that the ULA safety record remains impeccable. The recent streamlining of launch and reentry regulations is a landmark example of how the FAA has contributed to the advancement of US commercial space transportation."
Bruno: "it is vital Congress provides the FAA the support it needs to conduct effective oversight and enforcement of the licensing process so responsible operators will comply with FAA regulations and licenses. Those who do not should face enforcement & impactful consequences."
DePete: "Airline pilots already face operational issues involving spaceflight, as recently demonstrated by uncontrolled space debris entry points. We believe the FAA must take actions, including establishing launch planning."
Moses: "This is an exciting time, not only for Virgin Galactic, but for the entire industry as we work millstones toward human spaceflight. The committee's tireless work in progress on aviation and aerospace regulation is imperative and very much appreciated." $SPCE
Rep. Brian Babin: How does Virgin Galactic integrate standards & best practices without needing more regulations?

Moses: The 2004 Commercial Space Act "is actually functioning exactly as designed" and "it's important to just recommend or recognize how well things are working."
How do the FAA rule changes impact the timing and frequency of ULA launches?

Bruno: "This has allowed us to achieve the safety" record the company has and "we're more efficient."
. @RepAnthonyBrown: What is the importance of the FAA's role in international cooperation?

Bruno: "Space is a global commons – what any actor does in space affects all of us."
Bruno, in a reference to SpaceX's Starlink, adds that "for the first time we have a [satellite} constellation on orbit which is physically dense that will impact our launch access to orbits that are just above or just adjacent to it."
Bruno: "While we have a concern with air traffic during ascent, we have a much more physically crowded region within what we traditionally already called the congested space in LEO, which will lead to a very high rate of deorbiting spacecraft in just a handful of years."
DePete says his top action the FAA could take to support space operations "would be to pull together the individual committees of the NAC, the DAC and the COMSTAC to deal with airspace users and meld them into a single advisory integrated system."
The hearing is over.
You can follow @thesheetztweetz.
Tip: mention @twtextapp on a Twitter thread with the keyword “unroll” to get a link to it.