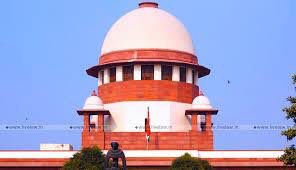 Bench: Where is element of natural justice here.

Kirpal states there are judgements in this regard.
#SupremeCourt
Bench: Where were all these points urged before HC.

Bench: Where is the affidavit of the counsel that he wanted to urge these Points before HC but wasn’t allowed.

#SupremeCourt
Bench: How do we adjudge the HC order on issues that weren’t even presented before the high Court.

Bench: Are you suggesting parameters in first notification weren’t ex facie complied with at all. #SupremeCourt
You can follow @LiveLawIndia.
Tip: mention @twtextapp on a Twitter thread with the keyword “unroll” to get a link to it.