Read on Twitter
At the zoo for the morning. A lot of new rules because of COVID. There's a one way system imposed, all the indoor enclosures are closed and you can no longer shift the orangutans.
Few empty enclosures because of the weather but this just gave us an opportunity to explore the many different varieties of toddler tantrum.
My favorite info-poster was the one that opened with: "The hippopotamus leads a double life..."
It was in reference to the fact that they split their time between land and water but the phrasing made it seem like he was an accountant by day and a drag performer by night.
Some solid parent/child eavesdropping as well.

Mum (to her tantrumming child): I'm going to leave you here.

Child: Good! There are penguins here!
Another top one.

Child: Dad, where are gorillas from?

Dad: Athlone.
In fairly typical fashion, the most excited my GF got all day was when we walked past a German Shepherd puppy on the way back to the car.
They have something called an Okapi now that I don't think was there last time.
I'd like to apologise for calling it a "freakish affront to God" in front of a group of small children.
In my defence, look at the weird prick. 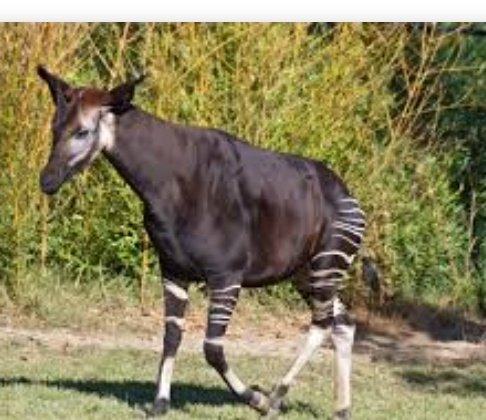 The one-way system sends you through the farm animal section first which I thought was clever.
I always went the opposite way and it was a bit of an anticlimactic to end with a couple of sheep after coming from seeing the A-Listers.
Favorite memory of the old zoo layout was the gorilla enclosure because it used to have a sign that said "Mountain Gorilla: The Gentle Giant" right next to a massive crack in the glass.
Gorilla also has my favorite scientific Latin name: Gorilla Gorilla.
Like whoever was in charge of naming it got the due date wrong and panicked.
The ducks seem to be there solely to taunt the other animals with their ability to come and go.
They were everywhere.
If I have one criticism it's that, every now and then, they'd have what looked like enclosures with massive info-boards and you'd run up all excited to see a panda or something and it would just be some kind of plant.
Once again I feel the need to point out that push-chairs have reached peak-notions. Couple of mums pushing what I'm pretty sure we're Decepticons around the Giraffe enclosure.
One of the chimps had a huge, swollen, red arse which, according to Google, means that she was ovulating and not, as I suggested, that she'd been on the Guinness last night.
The Red Pandas remain the star attraction of the Zoo but they *know it*.
There is an arrogance to them now that I did not care for.
If the number of times I looked at, what I thought, was an empty enclosure only to subsequently spot a massive tiger that was essentially right in front of me is any indication, I would be eaten immediately in any sort of jungle survival scenario.
The reptile & spider houses were closed due to COVID which I was happy about because I prefer not to ruin a pleasant day out by walking through rooms filled entirely with my nightmares.
You might as well add an enclosure where I have to sit my Leaving Cert in my pants.
They have little statues of different animals all over the place, which is fun, but the Gorilla one is entirely too realistic.
I wasn't the only one to almost poo myself when I wandered around the corner and saw it.
Back home now and I feel like the dog can definitely tell that I've spent the afternoon with other, more exotic animals.
I can sense her barely contained resentment as she licks her bum.
It really is a wonder that I never got that gig as Dublin Zoo's social media intern
I still think that keeping Lions, wolves and tigers so close to where we keep our president is an accident waiting to happen.
Especially considering that our current one could conceivably be eaten by a determined meerkat.
If I've another criticism of Dublin Zoo it's that they only have Humboldt Penguins which are objectively the worst penguins.
They're just pigeons that have taken a couple of swimming lessons.
Apparently orangutans are capable of boredom and it can lead to them becoming depressed and unhealthy.

To help with this, the zoo staff hide food around their enclosure and it's forbidden to talk about cryptocurrency within 25 feet of their habitat.
You can follow @RichyCraven.
Tip: mention @twtextapp on a Twitter thread with the keyword “unroll” to get a link to it.