Interesting couple of days.
Data on VOC were released later than usual, B1.617.2 outbreaks are occuring in education settings as government seems set on removing masks https://twitter.com/Zubhaque/status/1391299549843558404?s=19

2/ There has been a lot of disinformation in the press about masks in schools, including promoting a court case that was found to be fundamentally flawed as the judge explained masks are encouraged but not mandated. https://twitter.com/karamballes/status/1389969109878775808?s=19

3/ This led to pro government media putting out headlines like "Johnson defies unions" ignoring the fact SAGE are advising for masks to be kept for now.

Certain media voices have been promoting the harms of masks for many months,it encourages the online abuse we recieve. 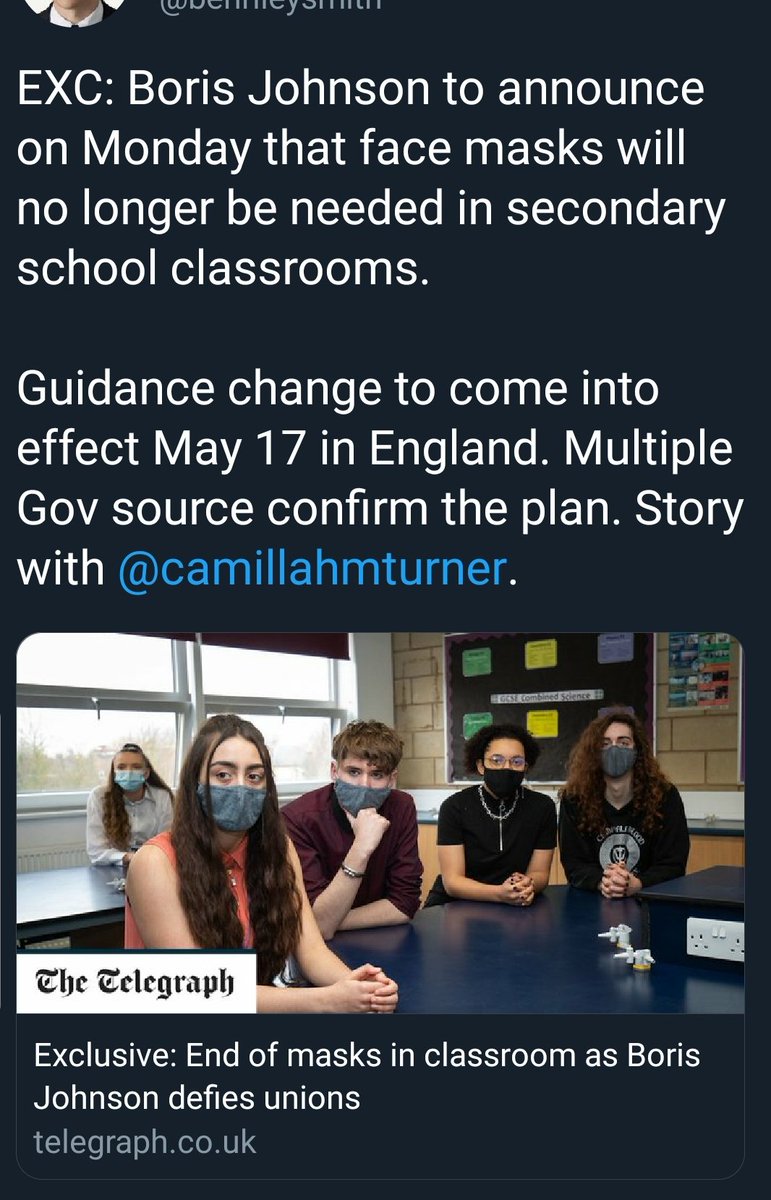 4/ Telegraph run yet another article claiming that NEU is losing lots of members for militantly asking for safety measures to be maintained without threatening strike action.

Membership up by 10s of thousands.

Once again stokes narrative that masks are child abuse. 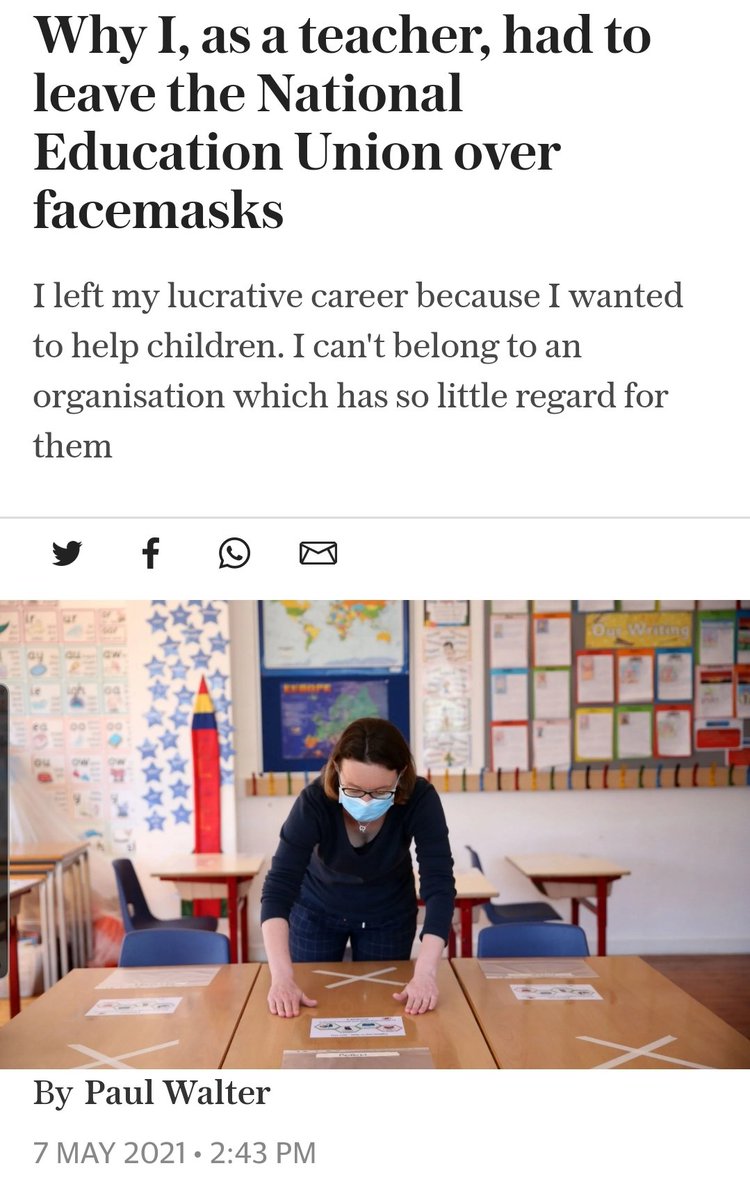 5/ Of course there are some who think masks should go, the GBD advocates, but others as well.

We keep hearing balance of harms in relation to masks in school, but these harms aren't being defined or evidenced when asked.

Longcovid as a reason to keep masks is often dismissed 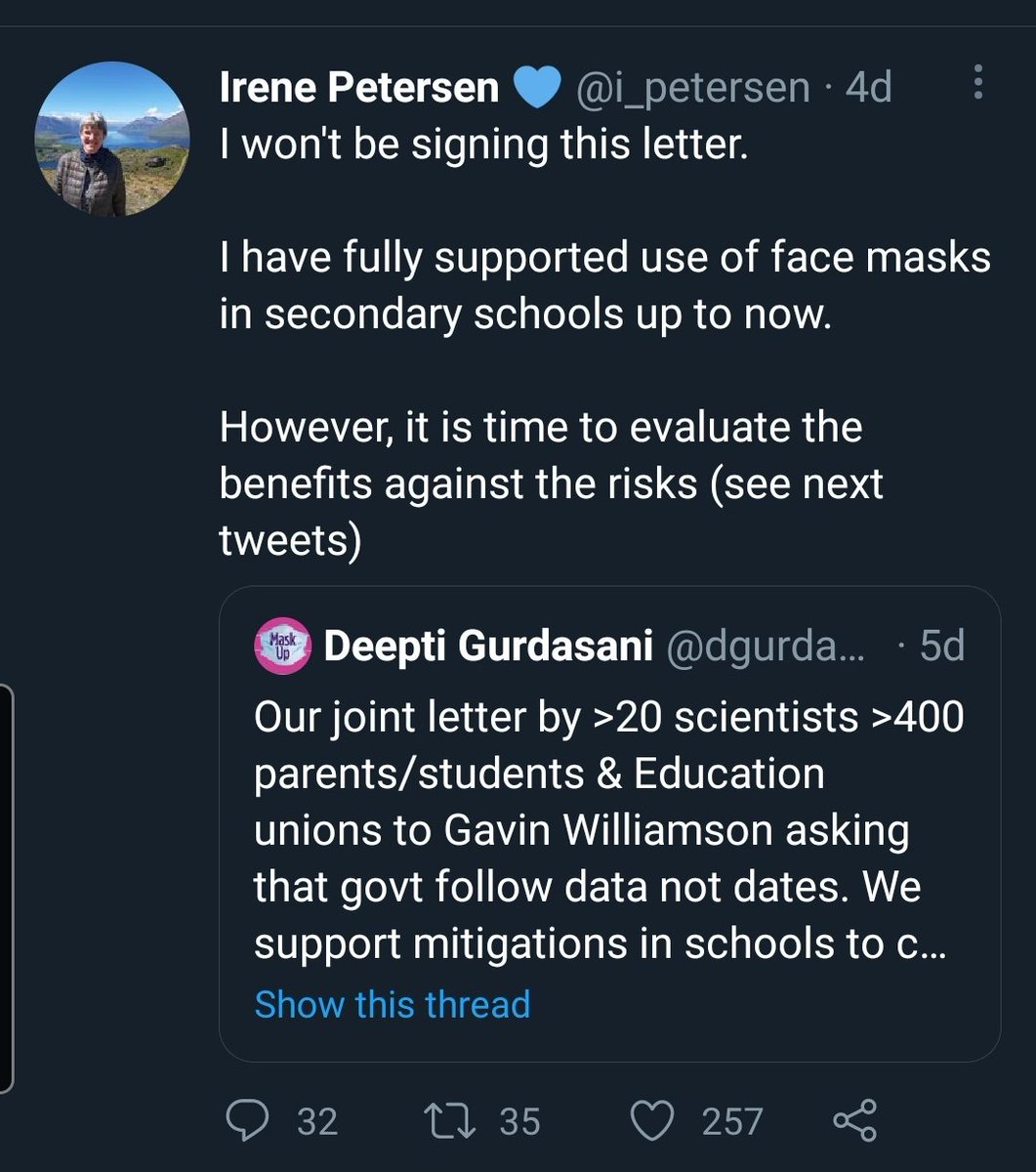 6/ As explained in other threads, asking for masks gets equated to Zero Covid, which gets labelled as too political and extremist, and so they gaslight those who think masks is a sensible precaution for now.

This is where public debate in the scientific community has reached 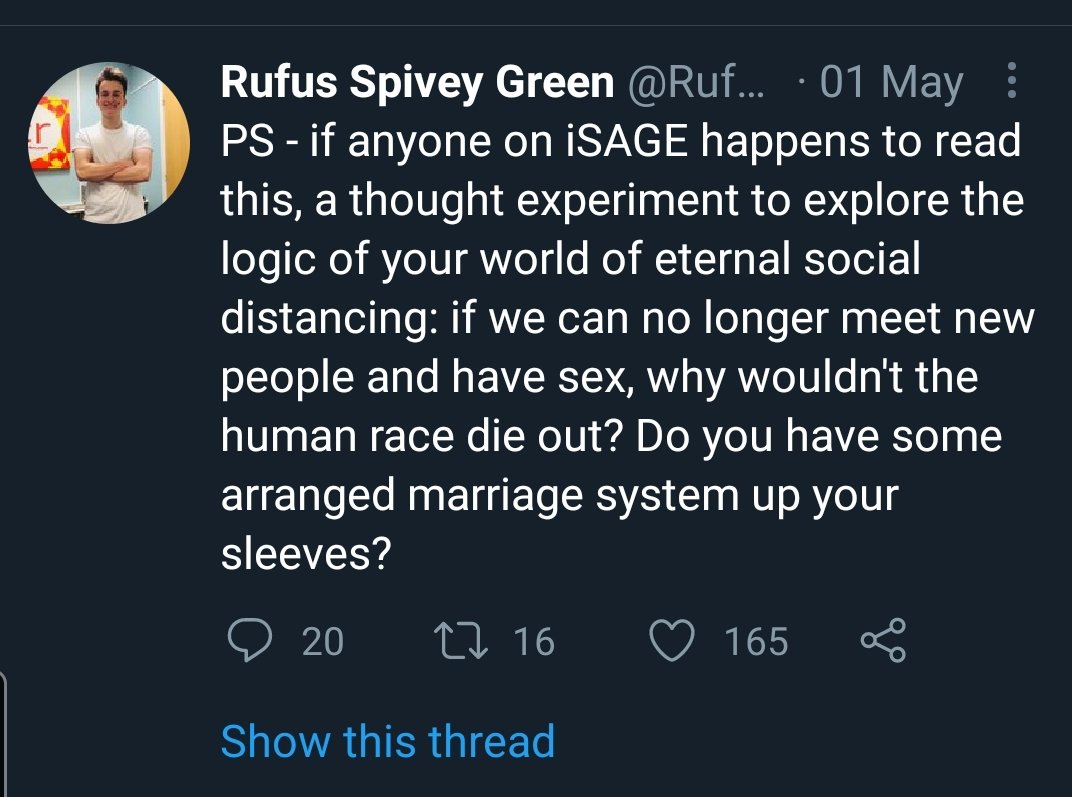 7/ This week there were two data releases
First is the School Infection Survey, they sample test students in just under 60 schools, students that are in on the day, so it excludes those who have recently tested positive or are isolating
This flaw was raised with previous editions
8/ It also doesn't match up with REACT positively data which is generally considered the better data to use as its over 20k randomised PCRs.

9/ DfE also took a data point from November, compared it to now and claimed "cases have continued to fall from November"
Theyve basically drawn a straight line and ignored the massive spike in outbreaks in December https://twitter.com/dgurdasani1/status/1391127450541826049?s=19

10/ Interesting that limited ONS data gets the press attention, not the detailed Israeli report on the role of schools in the pandemic.

Worth seeing how Israel changed schools policy last year after they got hit with a second wave larger than the first. https://twitter.com/fascinatorfun/status/1390643072971706368?s=19

11/ Then after the elections were finished the latest variant data was released late.
B1.617.2 is increasing in clusters and there had also been several large outbreaks in education settings this week. 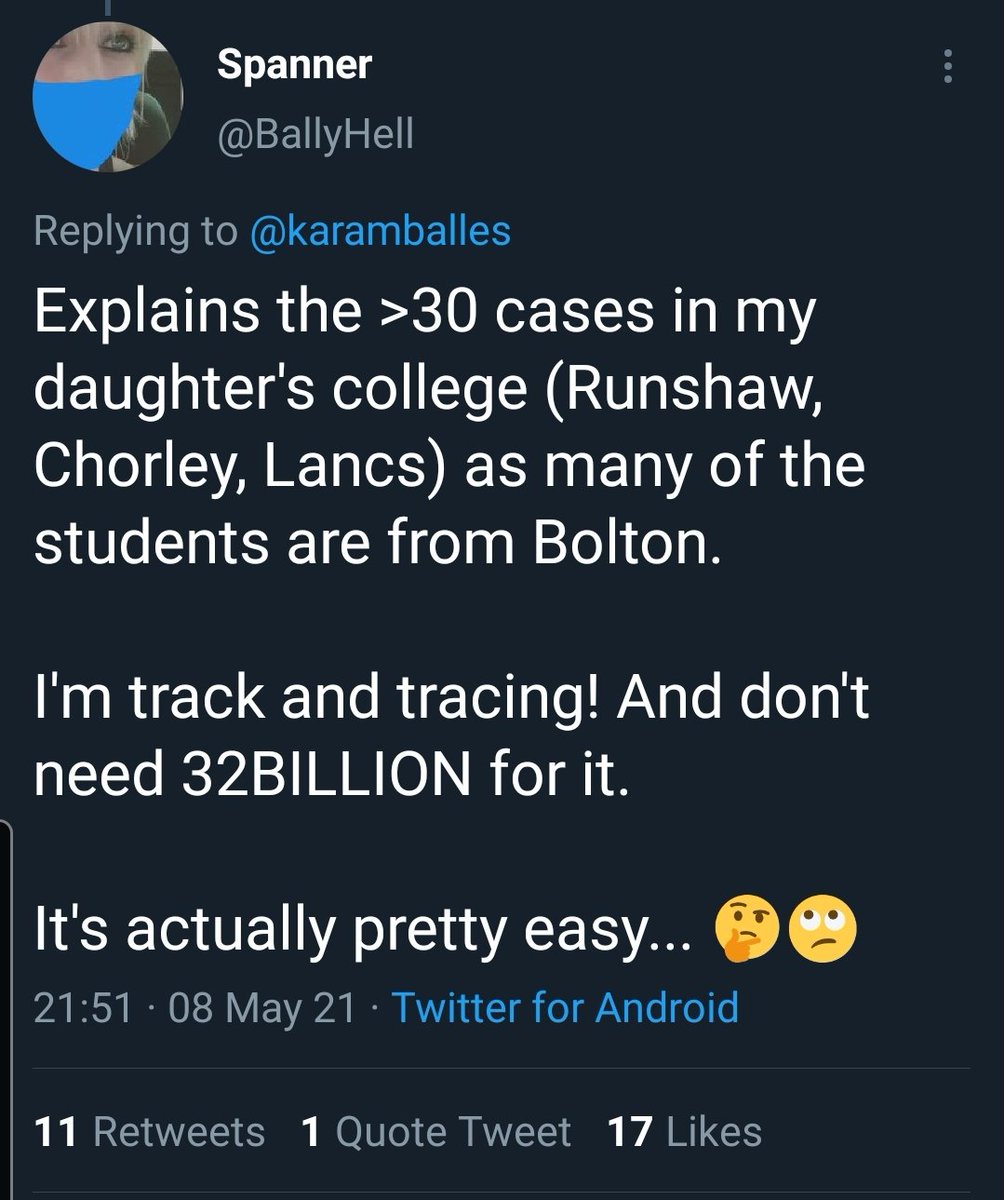 13/ Holding off travel restrictions made it easier for B1.617.2 to seed, holding off declaring it VOC meant surge testing was delayed making it easier to spread in seeded communities

14/ While media complain about draconian safety rules, the reality in some schools is very different.

There are also big differences regarding approaches to transparency when it comes to cases.

This is too common 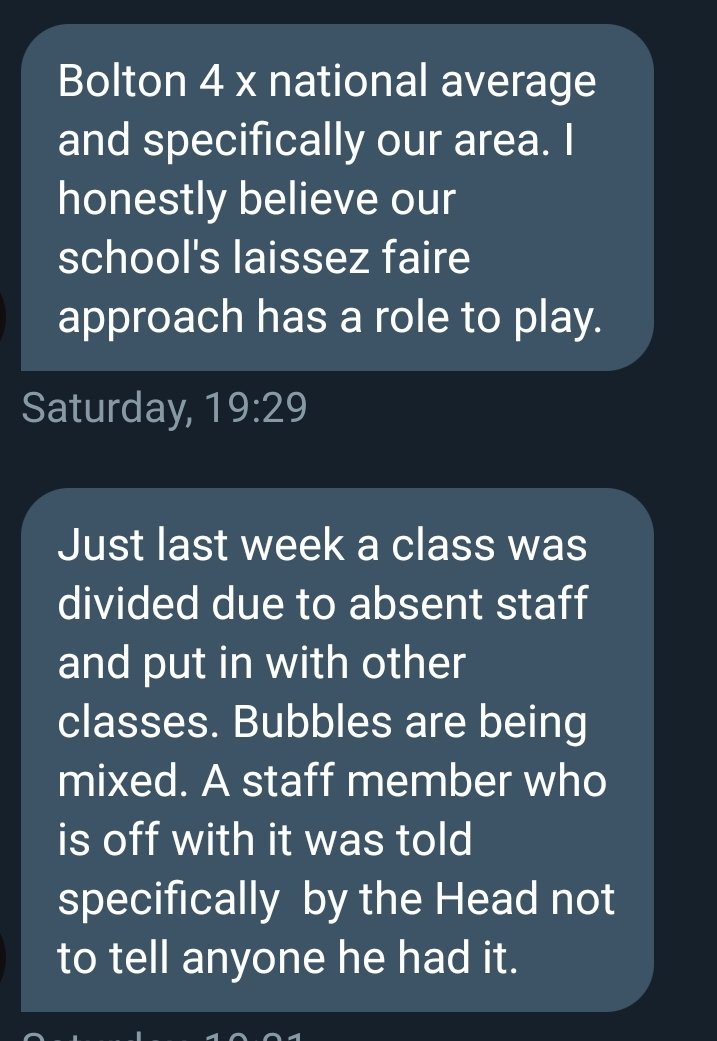 15/ There's been an outbreak of 100 positive cases in one education setting.

16/ Public Health are clearly worried and it is to see them surge testing schools, however the idea of banning masks in these schools in a couple of weeks is questionable.

17/ Unsurprisingly urgent requests are being made to government to provide more data so we get a better picture of whats going on to consider transmission and risks.
https://twitter.com/UNISONinSchools/status/1390653027426635776?s=19

18/ Now this is where events take an odd twist.

It starts when a headteacher says they've had an outbreak, with household members also getting infected, some were vaccinated to one extent or another https://twitter.com/dgurdasani1/status/1391061802461671427?s=19

16/ This triggers the head being directly called out for releasing this information.

There are a lot of messages about this being the release of private confidential medical information.

17/ As information comes out from those working in schools and with government/PH not releasing the desired data, people are left to reach out for first hand accounts to try and get a picture of whats going on with B1.617.2 and education. https://twitter.com/dgurdasani1/status/1391117318965575681?s=19

(numbers messed up in last two)
21/
Someone from PHE puts out this statement. So academics researching covid is not a public health purpose?

Clear message here,public should stay quiet on education cases. Doesnt it depend on what information is shared and level of detail? 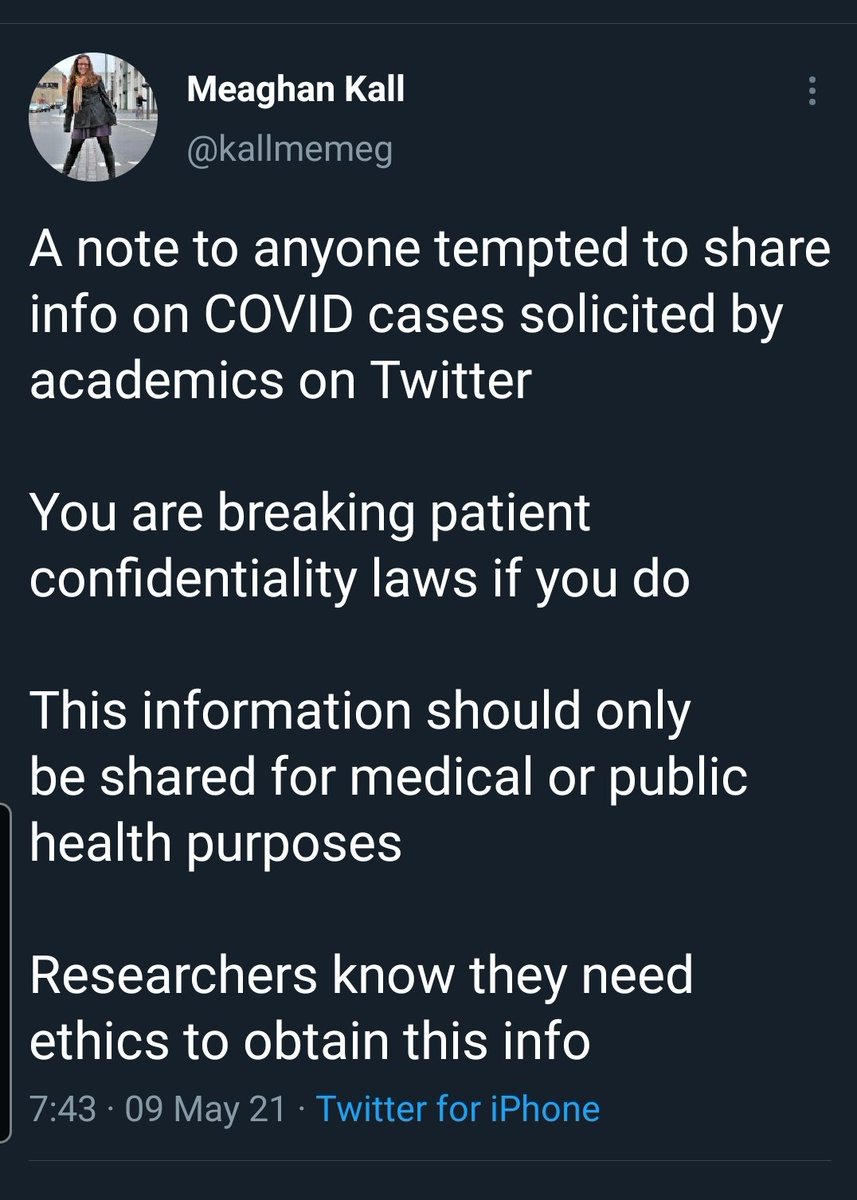 22/ This sets off the usual abusive anonymous bots and trolls but also some interesting but tense conversations as many who quoted the HT with a B1.617.2 outbreaks were warned and targeted https://twitter.com/dgurdasani1/status/1391302452805312512?s=19

23/ This exchange probably best summarises the difference of opinion about what is confidential and public health interest.

24/ As I'm getting grief rolling in as I write this I want to clear up a few points.

Ppl want PHE to release the requested data, this is not individual data, but sequencing data disaggregated across settings and some stats on vaccine efficiency in these clusters.
25/ I was not calling RufusSG an anti masker, however I was questioning the way he framed ISAGEs position.

This debate over what data is acceptable became more heated with employers being contacted. 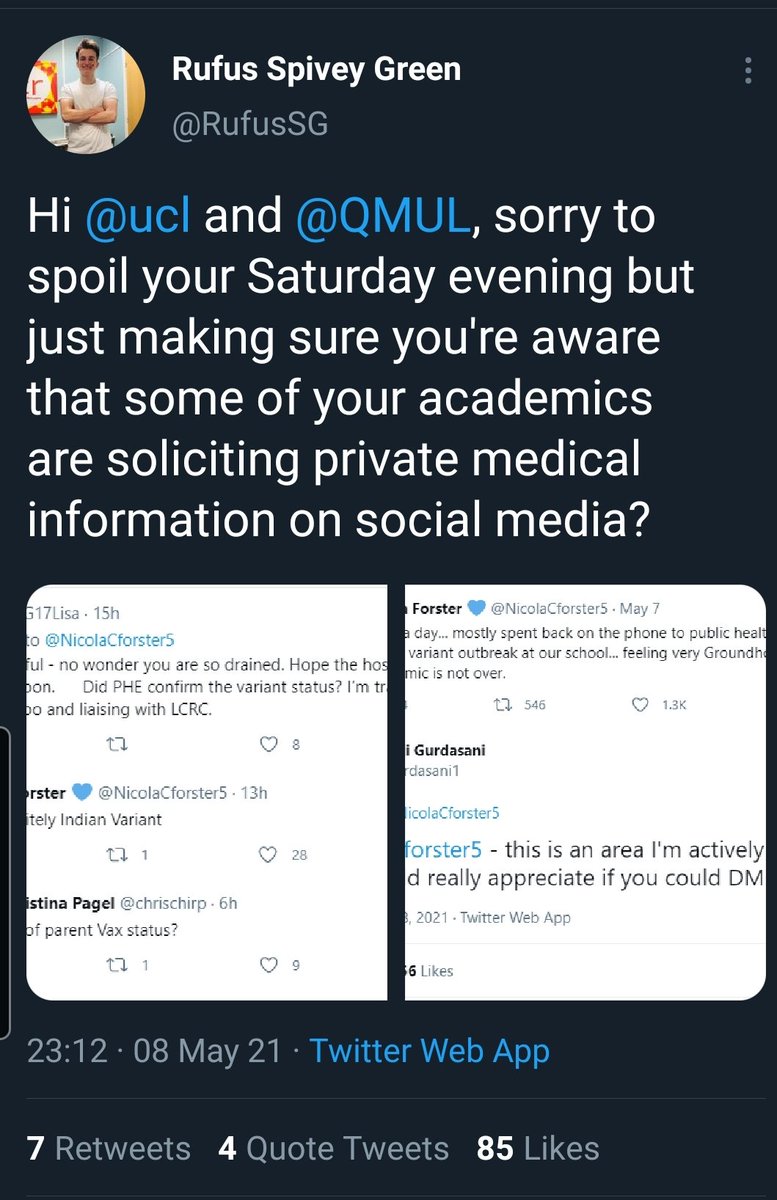 26/ As you can see its moved beyond debating why PHE isnt releasing data on variants in schools, or the ins and outs of GDPR which I did try to bring up as several ppl were asking for different information and I think some of it like how many cases in a school is fine. 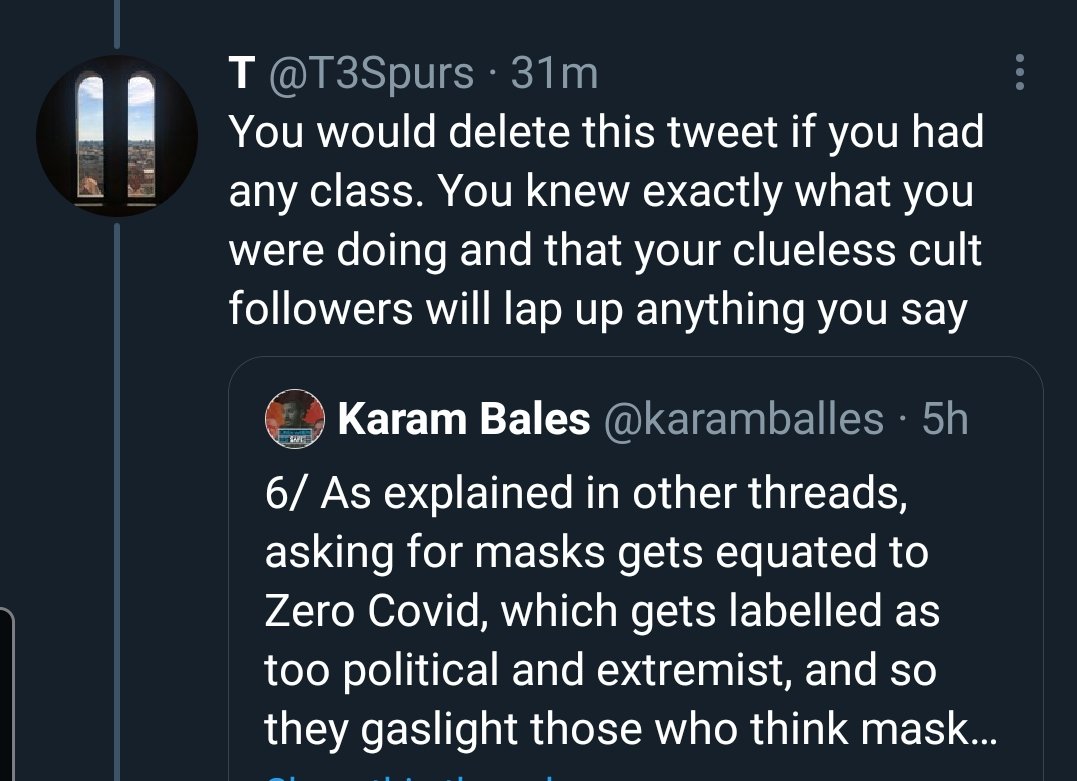 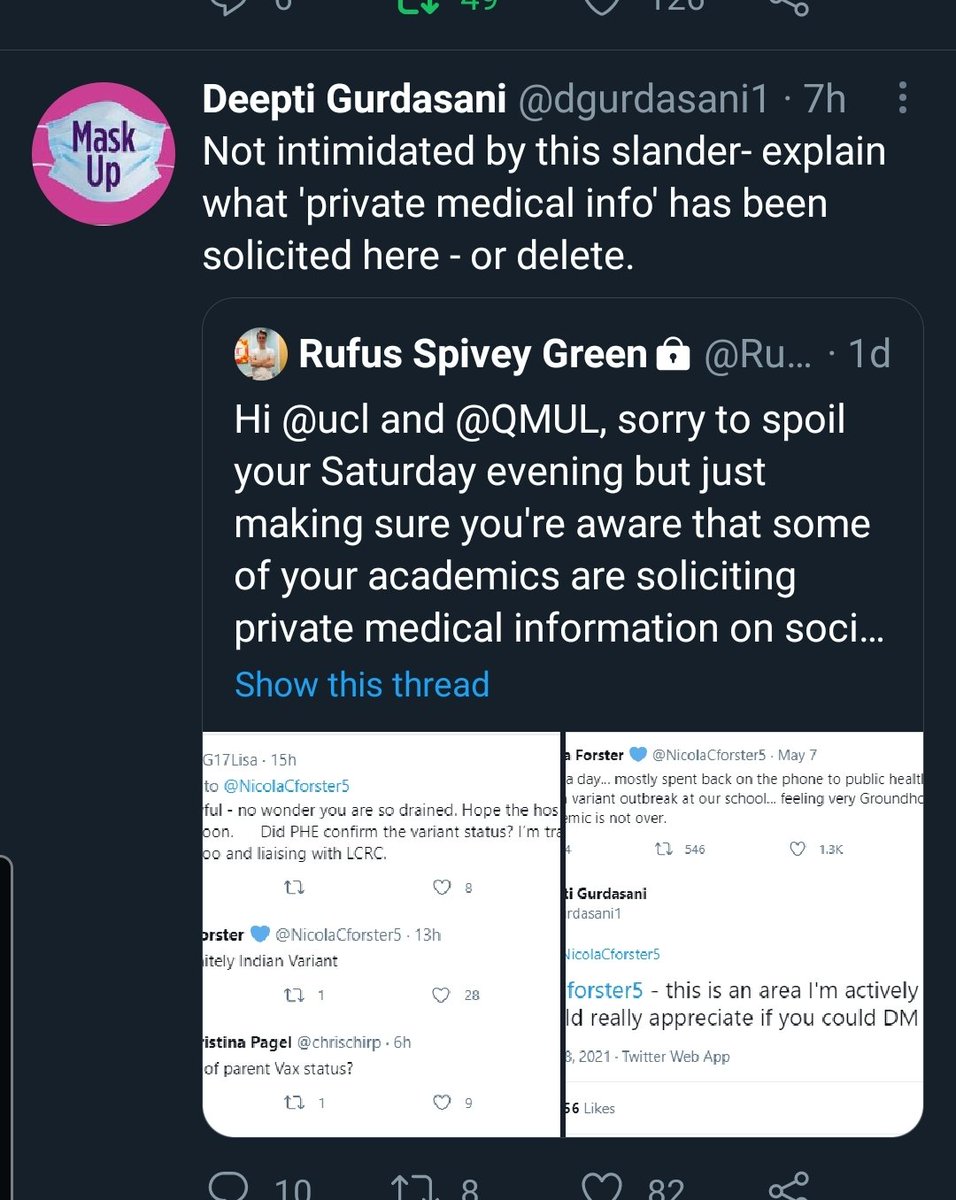 27/ So the head deleted the tweet and locked account, one side see this as victory, sign she was wrong, others say she has been bullied into silence. 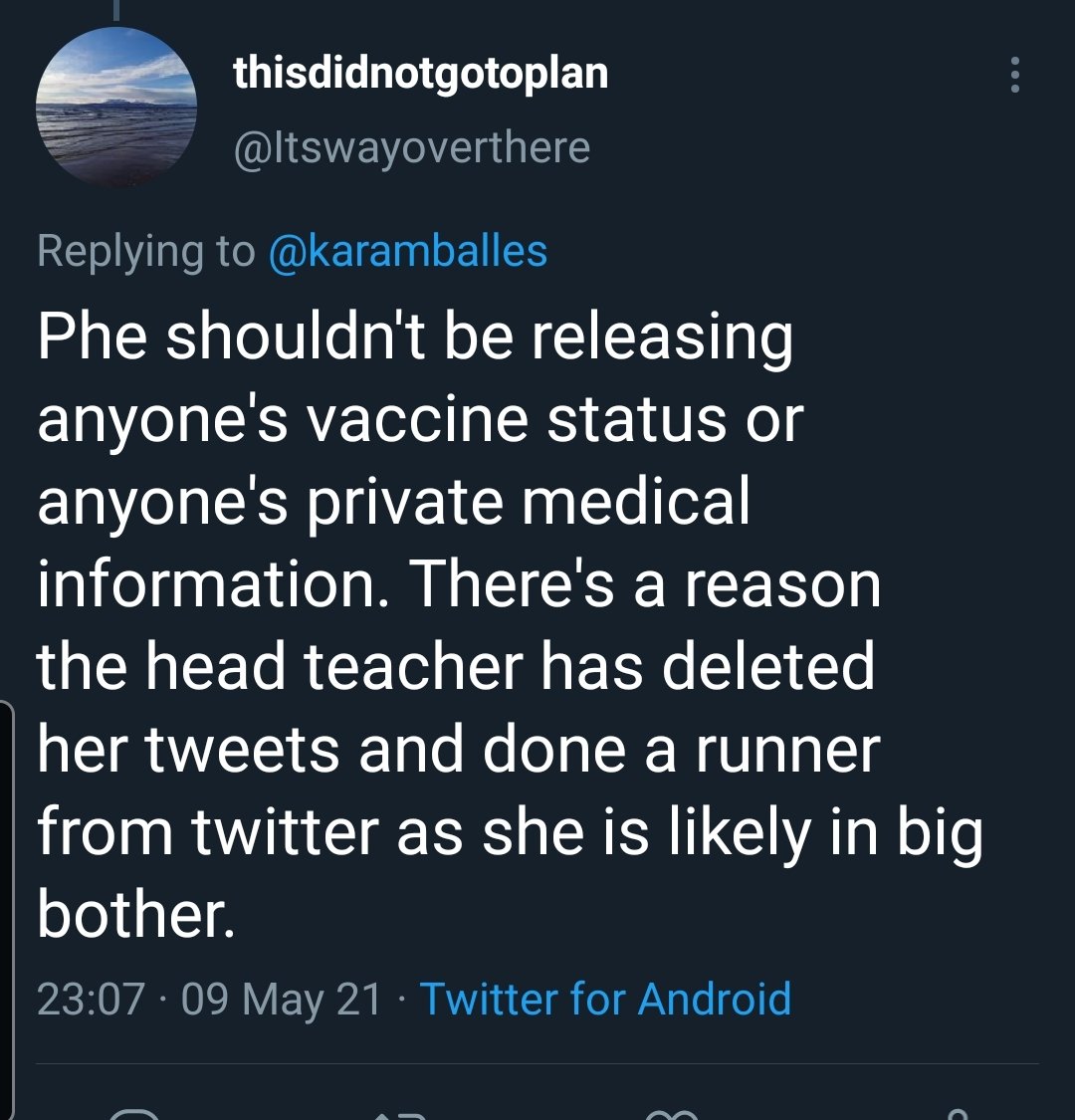 28/ RufusSG deleted his tweet at Deepti and locked his account, one side said this is a sign he knows he was wrong and the others say he has been bullied into silence.

See the problem? Why do these things lose civility so quickly? 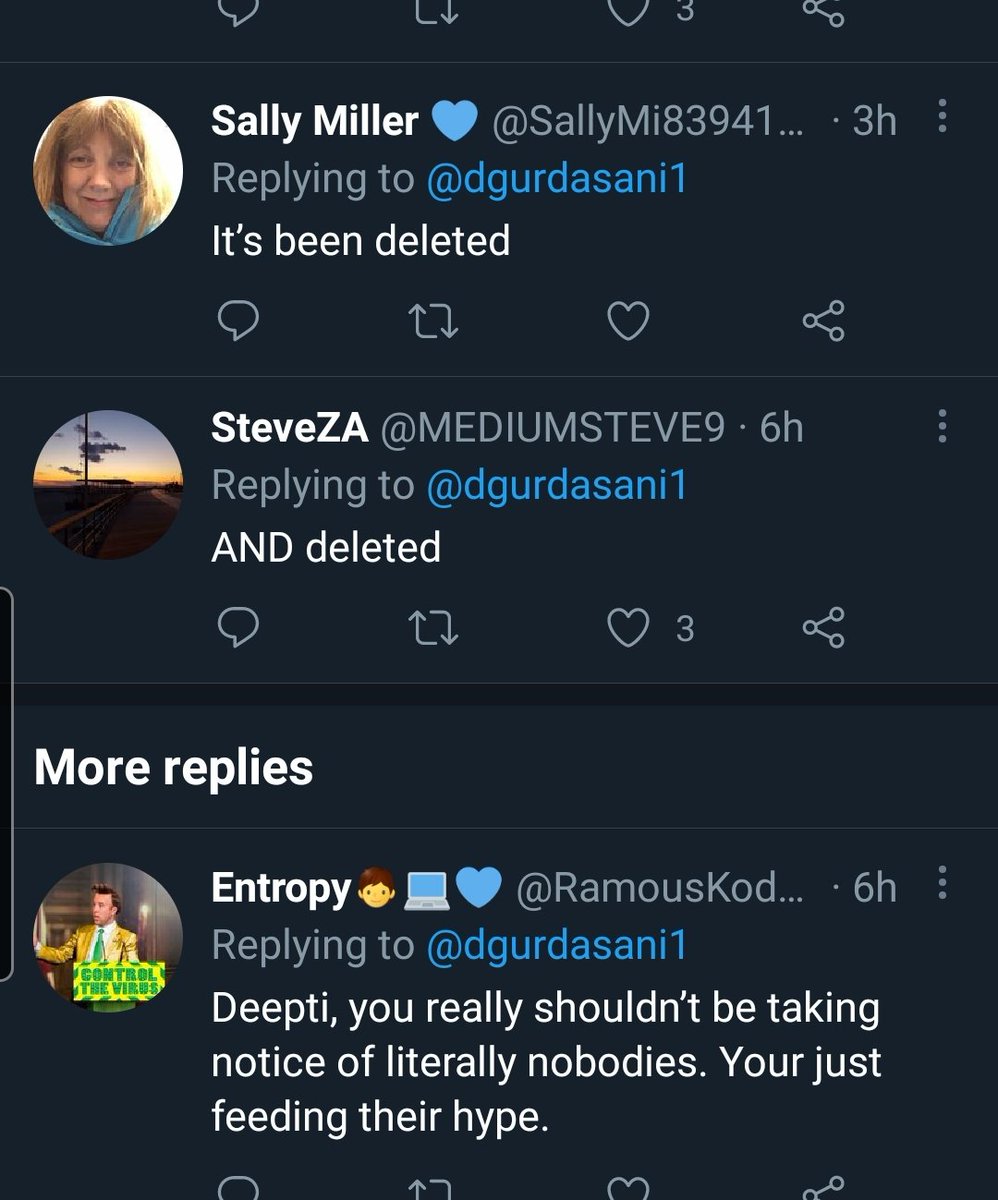 29/ Personality after a year of school staff regularly talking on #edutwitter about bubbles bursting and journalists reporting on case numbers,hospitalisation and unfortunately deaths in schools, seems strange the concerns have just arisen
Assume it was ppl asking about vaccines
30/ or reporting on number of family members also infected that triggered the talk of medical records, although I do get the feeling some think there should be no reporting of case numbers in individual schools.
Messy and hostile isn't great for clarity.
31/ Ethics and Consent have also been raised around school experiments to remove isolation and the night club trials

Some don't have an issue only the close contacts who choose not to isolate have to give consent.
Been attacked for saying that's unethical https://twitter.com/karamballes/status/1388269716096040961?s=19

32/ It does feel like concerns are swept away with criticism re-labelled as outright rejection.

No one said trials in general are unethical, they're saying the way these specific trials are conducted are unethical. 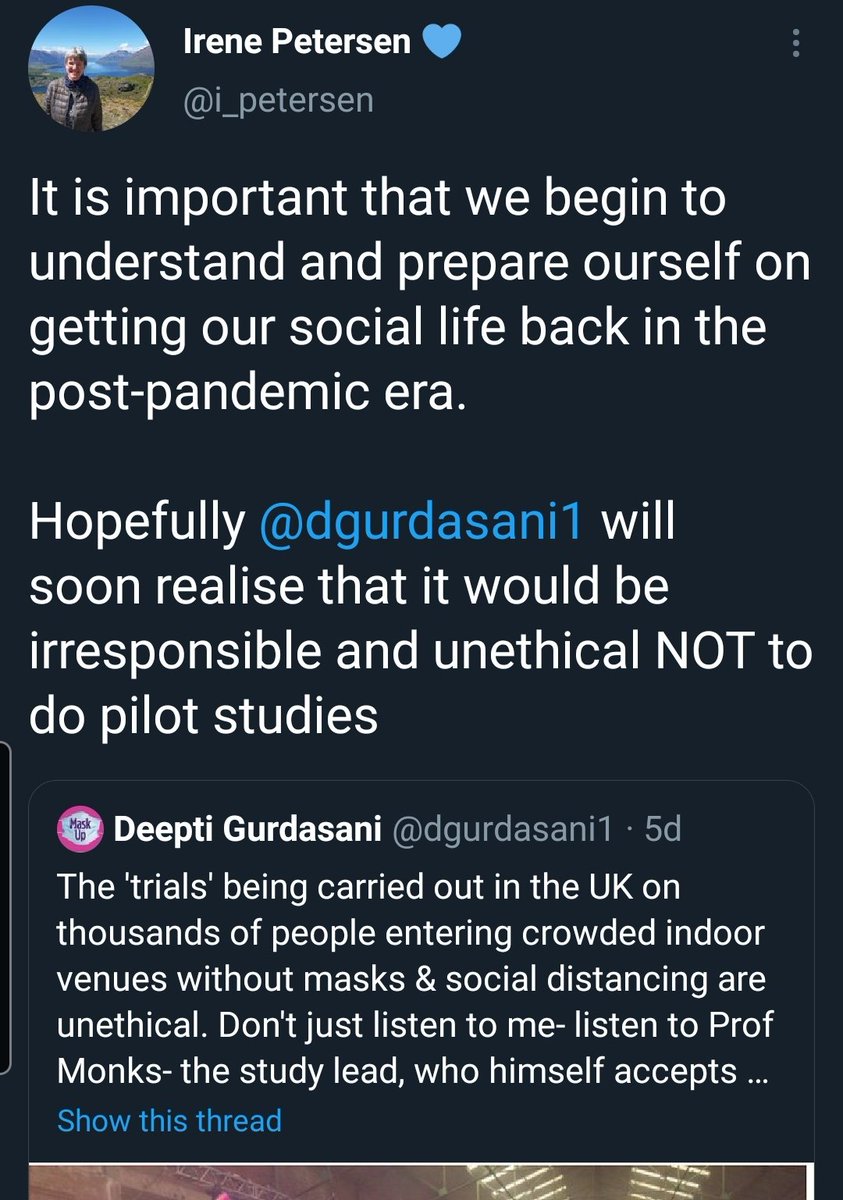 33/ Now I don't lump everyone who disagrees with me into one group particularly with cases low in much of UK and vaccines rolling out.
I appreciate differences of opinion on pace of unlocking, worried about long covid and clusters, perhaps traffic light controls for schools?
34/ Irene and RufusSG aren't the deeply questionable GBD types. Seen Rufus does interesting vaccine threads, Ive agreed with Irene at times, but they are drawn into hostility we are seeing in parts of the scientific community, positions have hardened and some grudges are fostered
35/ Theres probably a good sociology project to be done on the impact of the pandemic on sections of the scientific and medical community.

Academics have been plunged into the headlines like never before,come on nearly everyone now has their go to experts.
36/ But politics can't be separated from the pandemic because policy is decided by politicians, and so its been a shock to those who have also been plunged into the media and political world

Does the way the media set up experts as opposing views for features impact the experts?
37/ What is clear is that professional agitators and the troll farms promoted hy elements of the media have intentionally poisoned debate and sought to increase division.