(This is getting to be a Sunday thing for me:

As before, I’ll link to an [edited] transcription in the next tweet.

Mother's Day! Talk about politics!
1/ After a

break, I’ll come back and add a Twitter summary.

A transcription is here: https://terikanefield.com/?p=13857&preview=true

There is an aspect to totalitarianism we need to talk about: People believe what they are told to believe.
Drifting Toward Totalitarianism - Teri Kanefield

https://terikanefield.com/?p=13857&amp;preview=true
2/ The latest chapter in the saga of the radicalization of the Republican Party centers on Liz Cheney, who may be ousted from her leadership position in the House because she refuses to capitulate to Trump’s big lie about the election. https://twitter.com/ChadPergram/status/1389363218523512842

3/ Cheney wrote an Op-Ed presenting the situation as a turning point for the GOP. https://www.washingtonpost.com/opinions/2021/05/05/liz-cheney-republican-party-turning-point/

She said if the party continues to embrace this lie, it will unmoor itself from the truth and the Constitution.

Actually, that already happened. She’s late to the party.
Opinion | Liz Cheney: The GOP is at a turning point. History is watching us.

Republicans must decide whether we are going to choose truth and fidelity to the Constitution.

https://www.washingtonpost.com/opinions/2021/05/05/liz-cheney-republican-party-turning-point/
4/ But the nature of Trump’s big lie (that he won the election) definitely moves the party further right, into totalitarianism.

In a totalitarian society, all people have the same beliefs and accept as fact what they're told.
5/ They all accept the reality presented to them by the controlling authorities.

It’s an extreme version of fascism when everyone lines up, salutes the leader, and wears some sort of identifying clothing.

Sameness and conformity are valued.
https://www.britannica.com/topic/totalitarianism

Individuals are too overwhelmed for independent thought.

8/ Trump, remember, had no interest in trying to control the virus.

He wanted to control the narrative.

The pandemic wouldn't be a problem if everyone believed Covid was no worse than the flu, people were dying of other causes, and the numbers of the dead were exaggerated.
9/ He wouldn’t have to worry about controlling a pandemic that didn’t exist.

If it’s never in the history books, did it happen?
11/ If Trump lost the election, but enough people believe he won, did he really lose?

You can either win an election, or you can persuade everyone that you won.

The Republican approach is the latter. 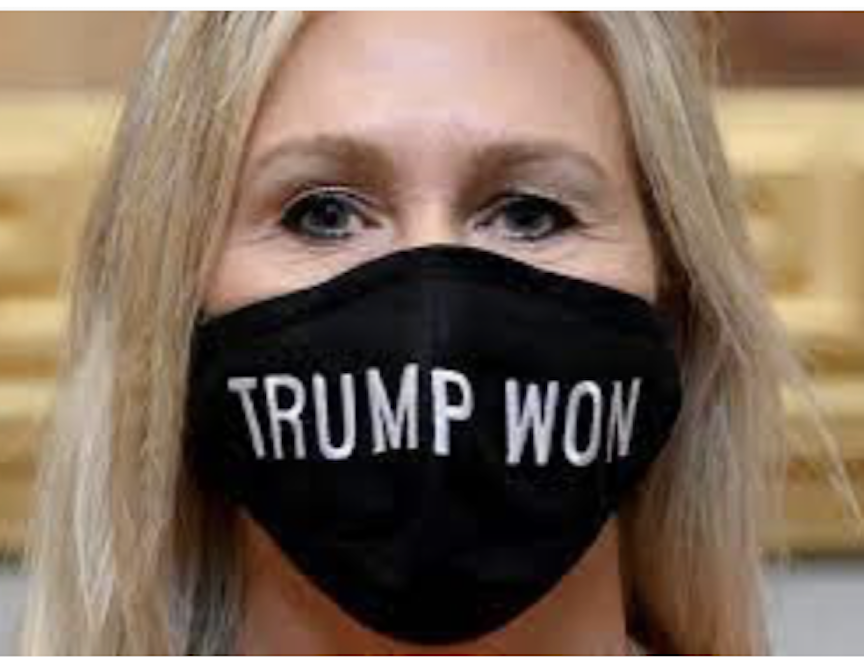 12/ This feels like a turning point for Cheney because she personally reached a line she won’t cross.

Some jumped ship when Trump became the Republican nominee.

Others, not until after he became president.
13/ Liz Cheney campaigned for Trump in 2020, so she was fine with all Trump’s lies during the four years he was in office.
https://www.washingtonpost.com/politics/2021/01/24/trumps-false-or-misleading-claims-total-30573-over-four-years/

But she reached her limit with the insurrection, which she understood was sparked by the lie that Trump won the election.
Analysis | Trump’s false or misleading claims total 30,573 over 4 years

A four-year Fact Checker project comes to an end.

https://www.washingtonpost.com/politics/2021/01/24/trumps-false-or-misleading-claims-total-30573-over-four-years/
14/ To slow or stop the Republican slide toward totalitarianism, enough Republicans have to denounce the lie.

But this would require an open vote, not a secret vote.

A secret vote to keep her in her position means they're still going along, too cowardly to speak out.
15/ If you do the wrong thing because you’re a coward instead of evil, you’re still doing the wrong thing.

Whatever the reason if enough people go along with the lie, it can become truth in this totalitarian way.
16/ Now, on the other hand, if the vote is not secret it might be a watershed moment — if enough Republican members of Congress have the courage to say aloud, the election was not stolen and Trump didn’t win.
17/ If they do that, it's harder for Trump to maintain the illusion.

Trump’s power lessens, and it’s harder for his successor to just pick up where he left off. It stops or slows the Republican slide toward totalitarianism.
18/ I don’t expect this to happen. It would be great, but they had their chances with two impeachments.

What do the rest of us do as the Republican Party embraces totalitarianism?

We hold on to the truth, even though people around us are resistant to the truth.
They couldn't do that without losing the support of Trump's "base."

They choose power over truth.

They also need lots of true believers spreading the word and converting others to the mythical (and appealing) world of totalitarianism.

Their "policies" center around fighting the enemy and keeping the "people" safe.

That's why Oceania has always been at war with Eastasia.

Exactly. The idea that history is written by the victors (incorrectly attributed to Churchill, I believe) is downright nihilistic. It's also very fascist.
It's the idea that facts don't matter.
Chilling. https://twitter.com/Pegster99/status/1391579179347496961