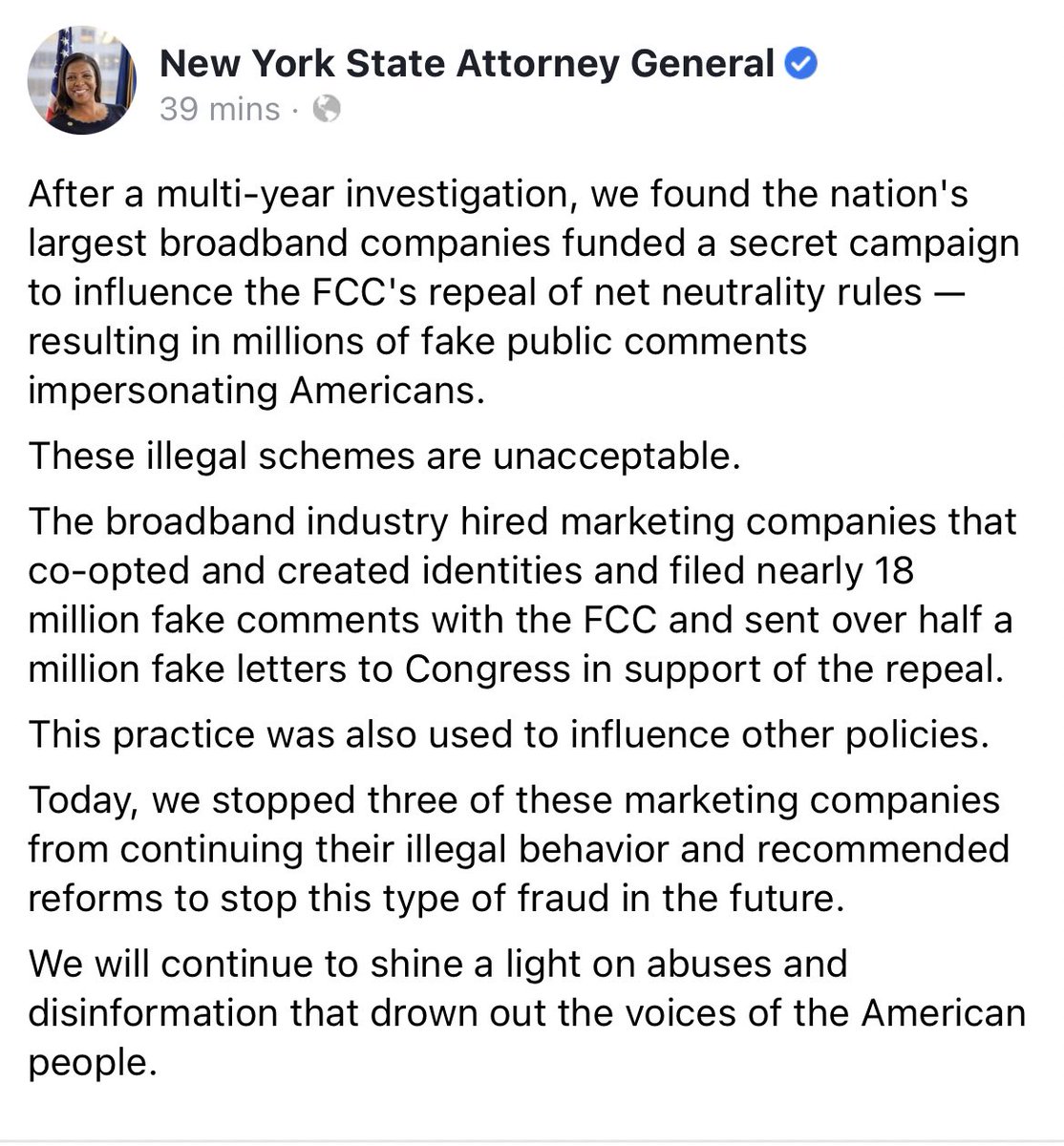 The NY Attorney General's investigation into this astroturf campaign found 18 million fake comments were filed with the FCC and half a million fake letters were sent to Congress. Many of the fake comments provided “cover” for the FCC’s repeal of net neutrality rules.
The OAG also found another 9.3 million fake comments that used fictitious identities. Most of these came from *one person* — a college student using automated software. In all, nearly 18 million of the 22+ million comments to the FCC on repealing net neutrality rules were fake.
To help generate these comments, the broadband industry hired commercial lead generators that used prizes — like gift cards — to lure consumers to their websites and join the campaign. However, nearly every lead generator simply fabricated consumers’ responses instead.
The OAG investigation also found that the fraud infected other govt proceedings. Three of the lead generation firms had also worked on more than 100 other, unrelated campaigns to influence regulatory agencies & public officials. In nearly all of these, the firms engaged in fraud.
“As a result, more than 1 million fake comments were generated for other rulemaking proceedings, and more than 3.5 million fake digital signatures for letters and petitions were generated for federal and state legislators and government officials across the nation,” per the OAG.
Three of the lead generators that were responsible for millions of the fake comments submitted in the net neutrality proceeding:
-Fluent, Inc. (4.8 million fraudulent comments)
-Opt-Intelligence, Inc. (250,000)
-React2Media, Inc. (329,000).
Statements from victims of impersonation in the fake comment scheme:

- “I am appalled to find my LATE husband’s name was fraudulently used... My husband passed away last year...after a valiant battle with cancer.” 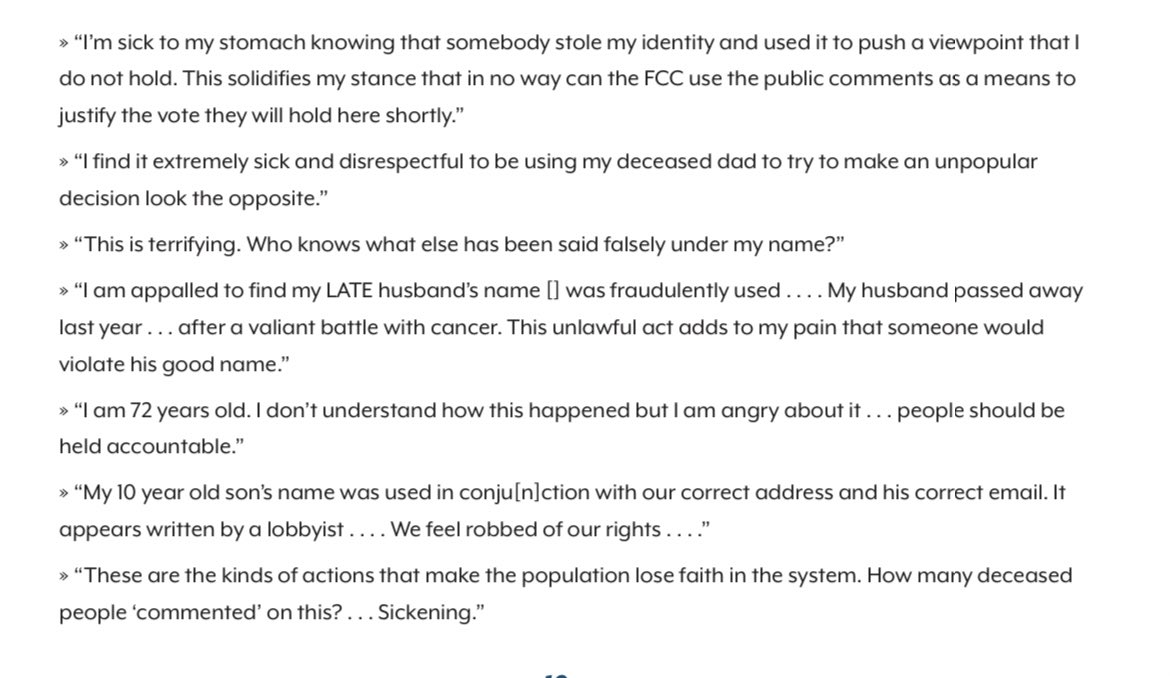 More statements from victims of impersonation:

“These are the kinds of actions that make the population lose faith in the system..”

“I find it extremely sick & disrespectful to be using my deceased dad to try to make an unpopular decision look the opposite.” 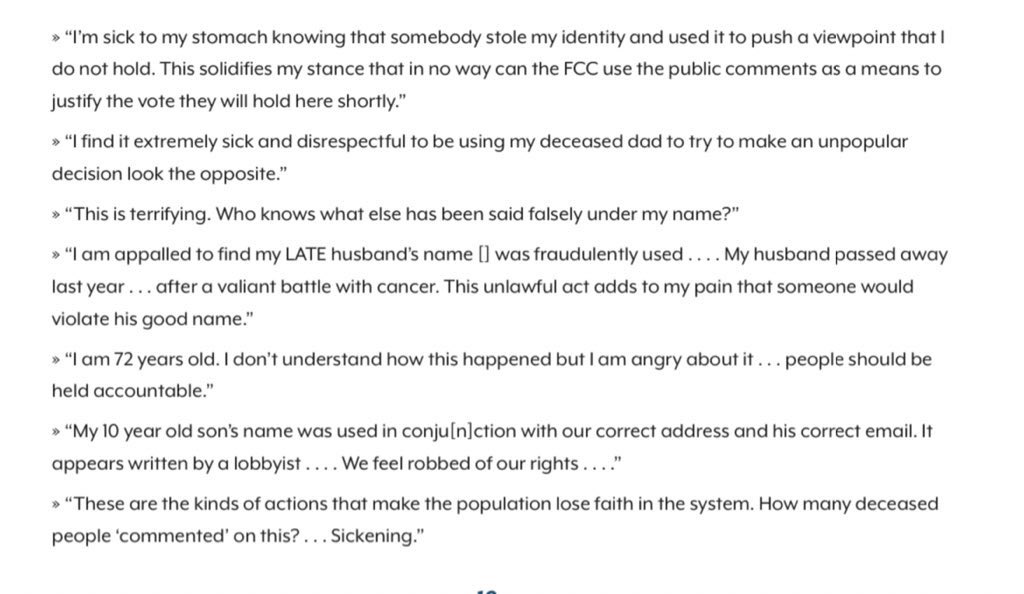 The college student responsible for 7.7 million comments submitted each of the comments to the FCC website, one-by-one, using software capable of rapid submissions w/o user interaction.

The government lacked safeguards to prevent millions of submissions from a single individual.
Fluent, one of the lead generation firms responsible for fake comments to the FCC, also engaged in similar activity for campaigns involved in issues including criminal justice reform, data privacy, energy & drilling, gambling, health care, taxes, and tobacco.
If you want to read more about the psychosocial processes involved in astroturfing: https://twitter.com/rvawonk/status/1390335302040948739

You can follow @RVAwonk.
Tip: mention @twtextapp on a Twitter thread with the keyword “unroll” to get a link to it.