Read on Twitter
One RT, One Take on Chinese Civilization
There are many things our society could learn from China that don't necessarily imply adopting all its values.

Our unwillingness to do so ironically reflects how we're a much less 'free' society than we like to think.

1/n
Xi Jinping isn't a great founder, while he is a live player and competent statesman, he isn't the individual who made or re-made China into what it is.

Further I don't yet think he has introduced any new social technologies to his society.

2/n
There is much less continuity between China before and after the Cultural Revolution than is usually assumed by both scholars and commenters.

3/n
If the current Chinese civilization continues to thrive, we might consider either Deng or even more controversially Mao, as its great founder! Note Chinese state media still thinks of Marx as an important predecessor!

4/n
If over time Chinese society moves away from the party-state model, it might make sense to think of it as a revival of older Confucian civilization.

Until then, their self-description as Marxist-Leninist seems closest to the mark!

5/n
The United States has a more centralized government than China.

A governor of a Chinese province or mayor of major city has more autonomy than the governor or even state legislature of a US state.

The Party is heavy-handed because it contests real local opponents.

6/n
Chinese cinema and even science fiction, valorizes sacrifice in service of a utopian future, that is far away.

American cinema and science fiction, focuses on good vs. evil, where the world is unchanged after good wins.

8/n
China has no viable way to train or select for successors to the current generation of statesmen. This is as competent as Chinese government will get in our lifetime.

Expect a slow 50-70 year institutional decline, similar to the US trajectory, starting in the 2040s.

9/n
The Chinese military is likely to have poor quality commanders, strange equipment failures and a general set of costly confusions and embarrassments in the first war it fights, the industrial base will buy them enough time to learn and eventually win.

10/n
he Chinese Communist party will eventually have to de-industrialize the country to keep political control. At that point ideological coordination will crumble since the utopian project is over. The Party will remain but abandon Marxism, it will grow more cynical and corrupt

11/n
As faith in Marxism wanes in core party leadership replaced by the national security framing China's nuclear arsenal will expand to match Russia and America's regardless of whether this is militarily sound. These arsenals are a symptom of nihilism.

14/n
Chinese urbanization will be in bulk complete in 10 years.

There will be a crisis of city government that follows this, the city political machines will break down without constant population inflows.

15/n
Long gone are the days when “Made in China” was a punchline. China is now the West’s main global competitor.

More than at any point in contemporary history, China sees itself as a strong power. Now aware of China’s monumental presence on the world stage, Western elites can take a leaf from Deng Xiaoping and

https://nationalinterest.org/feature/how-deng-xiaoping-solved-china%E2%80%99s-trade-problem%E2%80%94and-what-america-can-learn-him-170980
Xi Jinping dominates news and analysis today, but China’s current institutional stack was largely designed and built by Deng Xiaoping in the 1980s. I wrote about this in @AsiaTimesOnline:

17/n
China’s rise and the legacy of Deng Xiaoping

American elites have woken up to Beijing’s threat to global US hegemony. Now questions about China and its institutions are on everyone’s mind. Will its economy continue to expand or will it …

https://asiatimes.com/2020/06/chinas-rise-and-the-legacy-of-deng-xiaoping/
Deng Xiaoping didn't stumble into a winning strategy vis-a-vis America, which was far richer and more powerful than China in the 80s.

Deng he understood Chinese history with respect to trade and geopolitics very well. He crafted policies informed by them.

18/n
All the way back in the 16th century, China faced a very different competitor from the West: the Mongols, then ruled by the Mongol statesman Altan Khan.

The growing Mongol tribes desired to imitate and trade with China in order to secure their power. 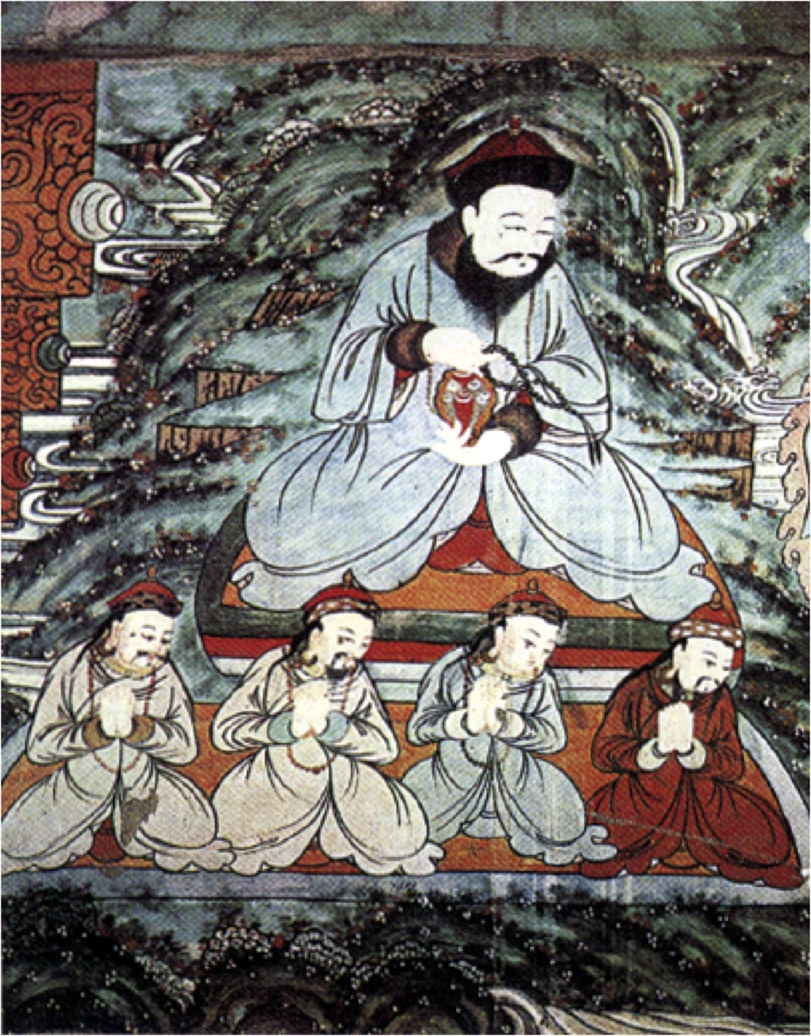 Rather than open up free trade with the Mongols for mutual economic benefit, as economists today might recommend, the Chinese enforced a blockade on the Mongols.

In response the spurned Altan Khan led multiple raids into China, even reaching Beijing. China would not budge.

20/n
Relative advantages are often more important than absolute ones. Security is a precondition for trade and economic growth.

If the Ming emperor allowed the Mongols to outgrow China by trading with them, he would have done himself no favors.

China beat the Mongols with an effective trade strategy. In the 1980s, Deng sought to do the same against America. 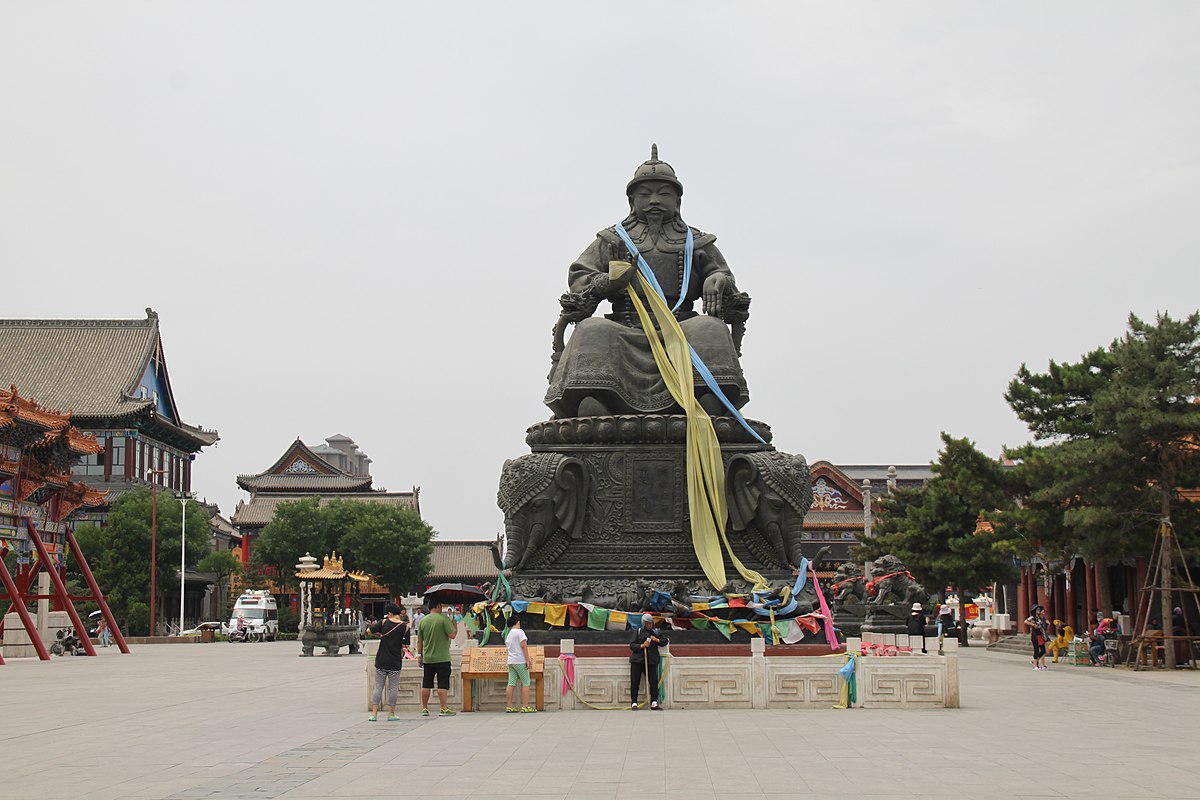 Deng knew that free trade with America would benefit China far more than America. But did America know this?

23/n
Deng gambled that the West, blinded by the successes of colonialism and the ideological battle of the Cold War, had forgotten how powerful imbalanced trade could be in the reverse.

He cemented his plan with a famous 1979 visit to the US helped normalize trade relations.

23/n
Deng toured the factory floors of Boeing and Ford. He visited NASA in Texas and sat on top of the Lunar Rover.

He attended a rodeo and donned a ten-gallon cowboy hat in a moment famously captured on camera. 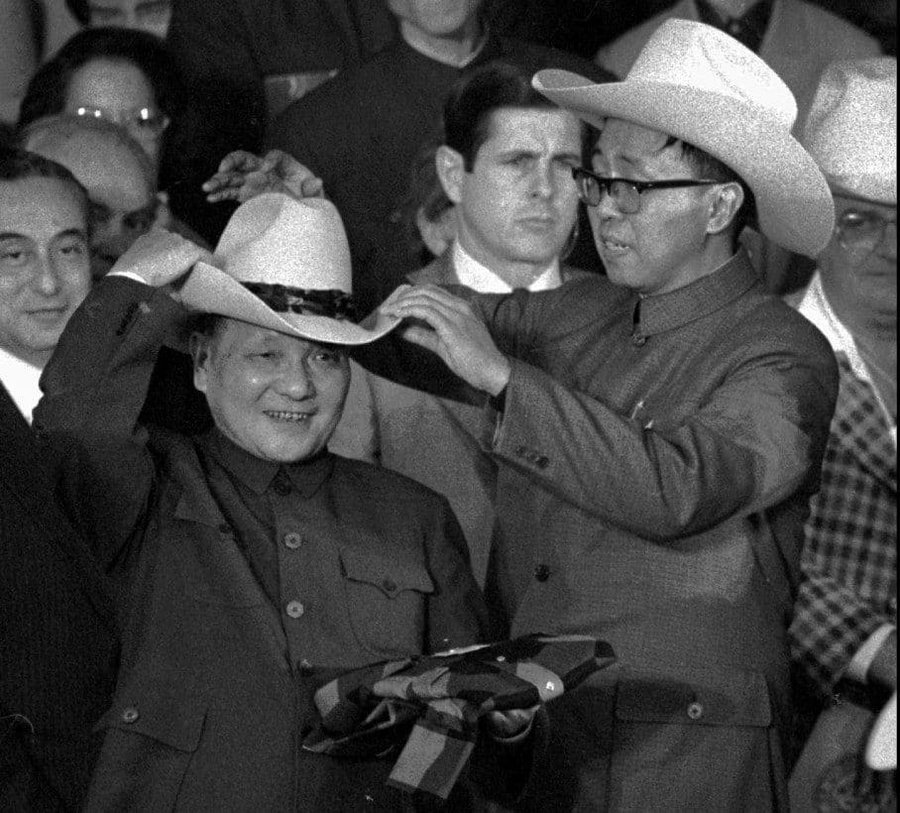 These were not just routine photo-ops. Deng made this strategic PR move in order to persuade the USA that free trade with China was a good idea.

Standing less than five feet tall, Deng did not look like a scary communist dictator in his oversized cowboy hat.

25/n
President Jimmy Carter himself noted that, to his surprise, soon after the visit, the American public looked on his new trade treaty with China very favorably: https://cartercenter.org/news/editorials_speeches/carter-emory-lecture-china-north-korea.html

The gates were open. U.S. economic fears in the 1980s centered not on China, but on Japan

26/n
40 years later, the fruits of Deng’s gambit are plain to see. Few still hold out hope that growth will liberalize China.

But, now aware of China’s presence on the world stage, Western elites might take a leaf from Deng Xiaoping and relearn how to exploit trade policy.

27/n
Why I think Chinese politics might eventually drive de-industrialization:

China is still very much a 20th century state. It is powered primarily not by advanced technology, but by party discipline and organization—paper-pushing not too dissimilar to that of the U.S. federal government of the 1940s.

29/n
In the 1990s we half-expected a decentralized team of cyberpunk hackers to take down the CCP. A few years ago, much was made of VPNs that can bypass the Great Firewall.

Yet the internet has centralized power and strengthened the Chinese state. (So too in America).

30/n
Thinking about China in East Africa today is similar to thinking about Afghanistan in 1995. It will prove to be immensely consequential.

We should examine which states the clashing empires will bolster or weaken. And which proxy groups may one day grow out of control...

31/n
China has four times the population of the US. Catch up growth would mean it towers over the US.

We are “reverting to the historical norm” of a huge Chinese economy, as they say—except for the small detail of that it’s now in the context of a declining global US empire.

32/n
Counting on the CCP to horribly mismanage China's economy is a fantasy.

They are doing a better job than either the EU or US elites have for 30 years now. COVID has made this more than clear.

33/n
The decline of the American empire was locked in when the US decided to pressure both Russia and China. Which it simply can't do anymore. It isn't 1997 anymore.

Irrational imperial overreach is sadly a sign of the times.

34/n
To the first approximation all of the truly modern scale cities in the world are in China.

The consequences of this will be felt for a thousand years. The most significant shift in urbanism since the advent of 19th-century industrial urbanism.

35/n
Western China experts don’t speak Chinese, but not because they are unintelligent. I think it’s even worse: China experts just aren't that interested in China.

Knowing too much doesn't help when your job is to write boilerplate that justifies a narrow window of policies.

36/n
Experts have been predicting a Chinese financial crash for 15 years. Before this the narrative was inevitable CCP regime collapse.

Western experts just aren't used to being outsiders. We must realize that we fundamentally do not understand China, and we need to reassess.

37/n
If China offered a standing offer of citizenship to Westerners, would it succeed in fundamentally shifting geopolitical and intellectual capital calculations?

I still think not. But in the coming decades it’s worth keeping this question in mind.

38/n
Modern China can be seen as a Western-inspired re-engineering of society in the aftermath of protracted Qing dynasty decline.

An interesting feature of classical Chinese civilization is that it was a result of re-engineering effort as well.

The knowledge and practices needed for civilization to flourish are commonly lost. Thinkers in the Late Zhou dynasty of ancient China recognized the decline of their era and attempted to overcome it.

https://palladiummag.com/2020/07/10/how-late-zhou-china-reverse-engineered-a-civilization/
The Hundred Schools of Thought tried to address the failures of the Late Zhou dynasty. Some like Confucius tried to reverse-engineer lost knowledge, practices, and traditional rites that had made the society of Zhou dynasty China in the first place.

40/n
Contra Confucius, the Legalists, represented by Han Fei, sought to jerry-rig what was working without special reference to the Zhou. The Taoists, in disagreement with both, emphasized internal harmony and harmony with nature over social harmony.

41/n
The contributions of these schools and other have melded together into later Chinese civilization. Without succeeding in completely restoring Zhou civilization, they succeeded in re-engineering key features of epistemic health, stability, and prosperity.

42/n
Because intellectual history follows power, I think our current explanation of China's rise to power 'China is engaged in rebranded capitalism!' is going to be replaced by 'China perfected socialist development.' as Western hegemony recedes.

China's mass surveillance and digital dystopia have been exaggerated or just made up in many pieces of Western reporting.

For now, while there are many things to be worried about in China, a single and all-pervasive ranking system isn’t one of them—yet.

https://www.brookings.edu/blog/order-from-chaos/2018/11/19/chinas-orwellian-social-credit-score-isnt-real/
On the ground reporting on some of the limits of China's supposed surveillance state.

A team of Palladium correspondents spent a week in Xinjiang. They saw how the Chinese state uses Uyghur manpower and high-tech Maoism to suppress Islam and extremism.

https://palladiummag.com/2018/11/29/a-week-in-xinjiangs-absolute-surveillance-state/
The surveillance state concept needs to be rethought overall:

"The infrastructure needed to understand and to interpret—including transparent institutions and well-aligned incentives—is very different from the equipment needed to collect data."

Advanced surveillance tech will prove a false hope for politicians worldwide—as it already has for China’s authoritarian leaders.

https://www.the-american-interest.com/2020/03/30/the-false-promise-of-the-surveillance-state/
China stories are America’s mirror. These stories allow us to analyze the political effects of technology on their own terms. 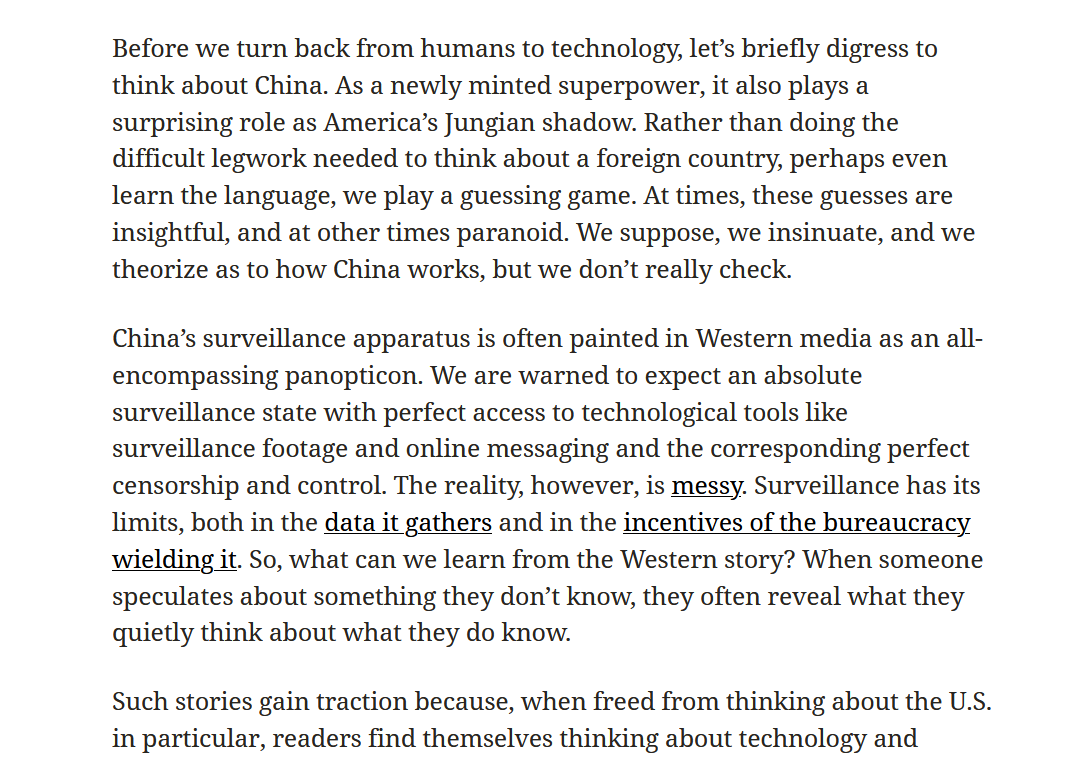 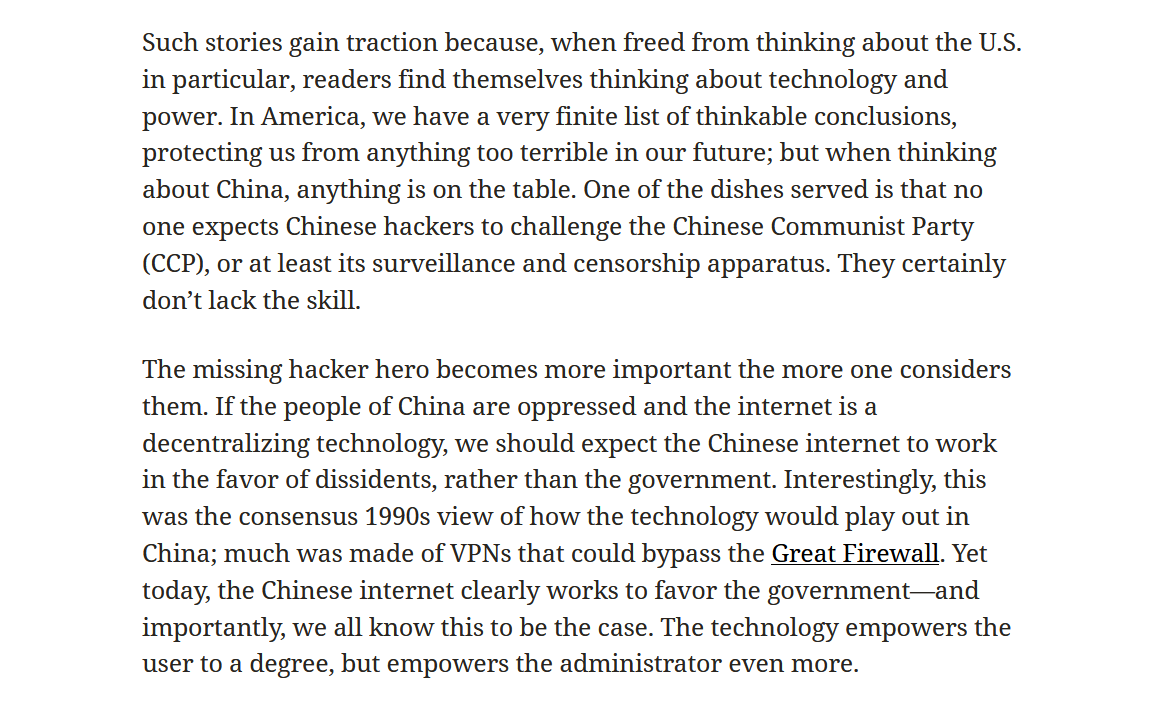 When it comes to demographics, a key consequence of low fertility that is usually overlooked is that it helps China's long term political stability.

48/n
Looking at the very ancient past, China's modern territory was likely the home of several unrelated civilizations.

A good example is this 4,300 year old city. At its center was a wide pyramid supporting a 20-acre palace.

Discoveries at the sprawling site have archaeologists rethinking the roots of Chinese civilization.

https://www.nationalgeographic.com/history/article/mysterious-carvings-evidence-human-sacrifice-uncovered-ancient-city-china
Chinese movies have better costume design and aesthetics than contemporary US movies.

Their stories are also more coherent. This is the golden age of Chinese cinema.

You can follow @SamoBurja.
Tip: mention @twtextapp on a Twitter thread with the keyword “unroll” to get a link to it.