Read on Twitter
I finally got the time to read @Tom_deWaal's much debated article via @Carnegie_Europe and while it was amended by now, I still feel that some of the wordings or framings used are just not right. Here's why and what: https://twitter.com/Tom_deWaal/status/1388024718939365379

TdW insinuates that seeking legal claims against the perpetrator (successor state) is somehow the opposite to seeking reconciliation.

I'd disagree. I think it's the precondition to reconciliation. It's also how justice works - if you get victim of a crime you seek legal justice. 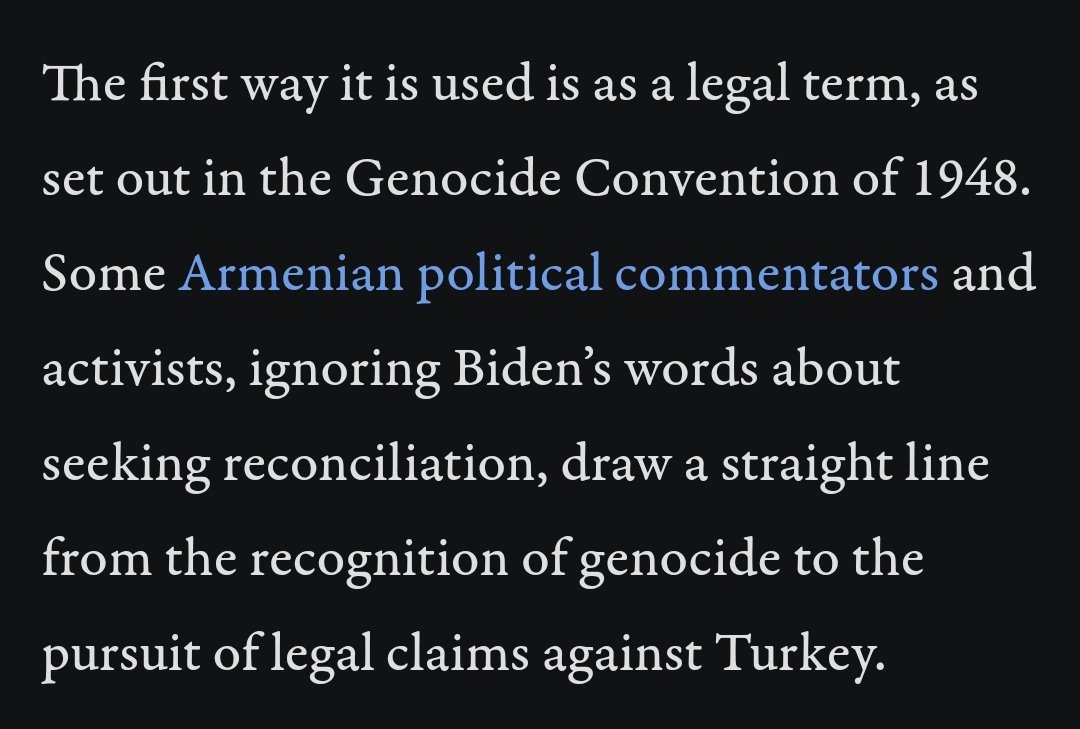 From a German perspective, this passage got me wondering. My country has reconciled with #Israel and the Jewish and Romani communities in the world. I'm of the firm belief that this was only possible, because we as a nation accepted moral + legal responsibility.
I can't see how Germany as successor of a terror state could have ever reconciled with anyone without accepting the terror it brought to millions around the world.
Everyone, including the #Nama and #Himba in #Namibia who are seeking legal claims are right + want reconciliation
So are #Armenia|ns, #Assyrians, #PonticGreek and others who have lost their relatives in the genocide in #Turkey. There is only room for reconciliation, if guilt is accepted by the perpetrator and legally cemented by international law.
And then there's bit about #identity politics, which I just find very irritating to say the least.

Yes, there are aggressive political fringe groups around the world who coin any event genocide to justify revenge. But that's not in any way with the topic the article deals with. 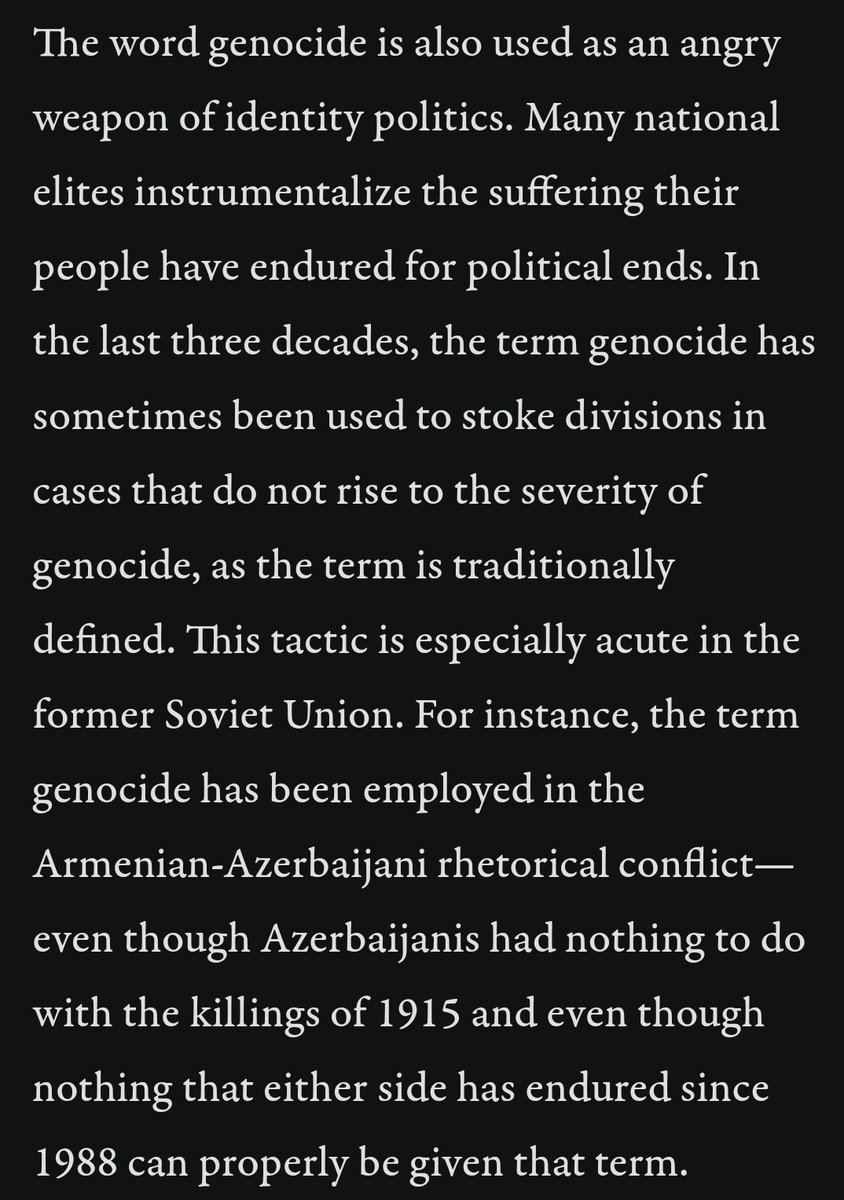 As a German, the horrific claim of the "bomb holocaust" against Germany in WWII, which far-right fascists coin today comes to my mind. That outrageous and an abuse of the term to justify new violence. The same is true for the " #Khojaly genocidal" claim of #Azerbaijan.
Such things are entirely made up for only one single reason: To cause hate against the apparent perpetrator and justify aggression, violence and killing of members of that perceived perpetrator.

But linking this to an actual genocide, such as the Armenian genocide, is frivolous
Even more, it's exactly what those fringe groups that use the term genocide for war rhetorics, such as #Aliyev, want. It's the entire reason behind making up such claims. Such efforts deserve to be outcalled and denounced rather than mixed up with actual genocides in an article.
Finally, the reason that the term genocide does appear in the "Armenian-Azerbaijan rhetoric conflict" is simple: Because #Aliyev keeps referring to it. Because this government repeatedly used genocidal language and positioned #Azerbaijan as "one nation" with the perpetrator.
I agree that none of the events since 1988 were a genocide. But I'd argue it was an attempted genocide by #Aliyev.
The actions in his war on #Artsakh fulfill points a), b) and c) of the genocide convention. The acts were committed against a national group. 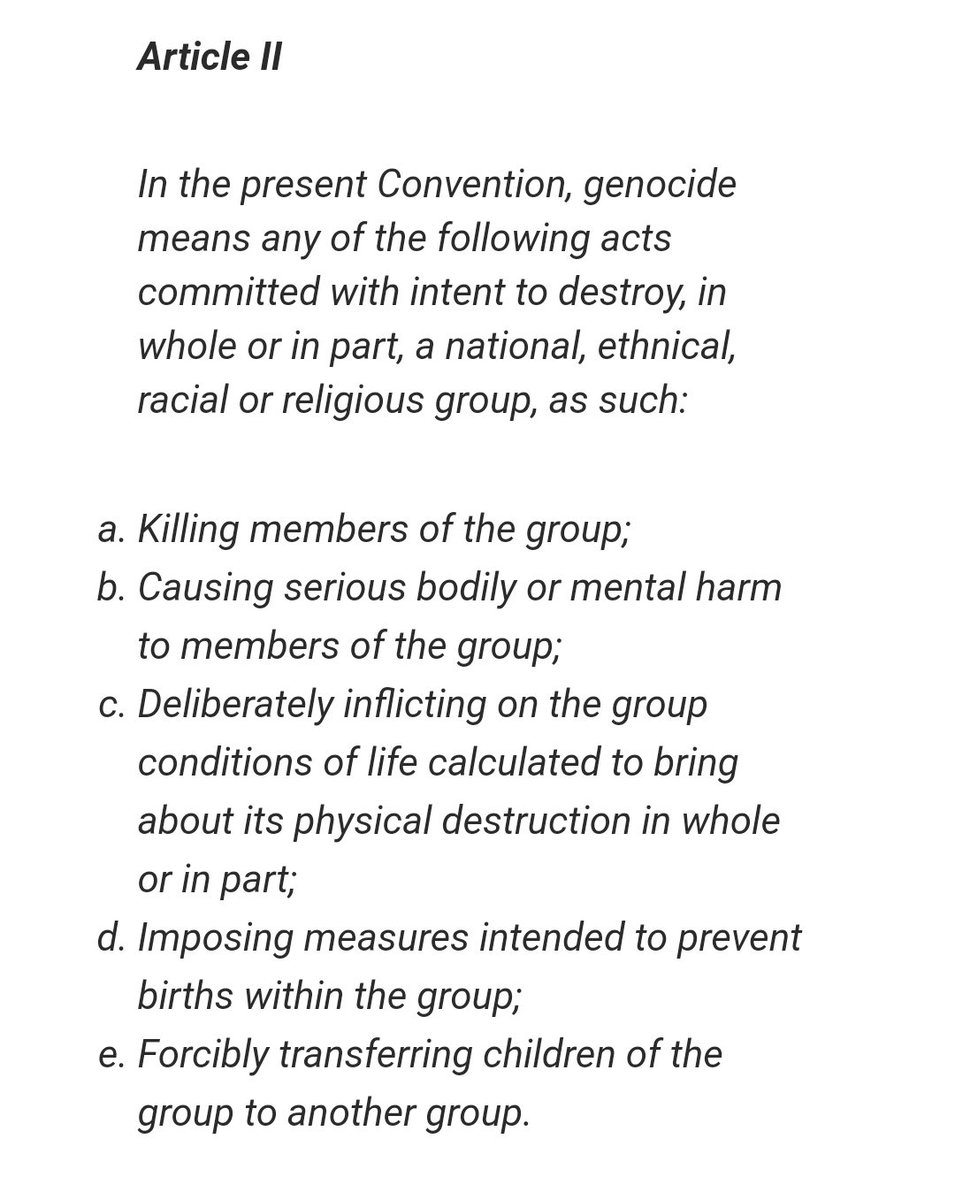 The legal question is of course if there was an intent to destroy a national group. Listening to any speech of #Aliyev, reading any tweet of him or a school textbook his government issued will easily answer that - Yes!
It doesn't matter if #Aliyev attempted to wipe out all #Karabakhtsi or if you see it as an attempt for a genocide against a part of #Armenia. His openly expressed intention was and is to destroy anything Armenian from what he claims as #Azerbaijan|i lands.
Now Armenians have used the term genocide a lot in the context of #Artsakh, too, indeed. Mostly, as a dictator threatened to commit against a genocide against them and referred to the Young Turks as a glorified role model for his troops.
I'd be surprised if any single Armenian isn't reminded of the horrors his or her ancestors had experienced in the Armenian genocide, if #Aljyev keeps reminding them about it on every stage he finds.
I don't think @Tom_deWaal is bad intentioned in any way. I respect his work a lot. But I feel this article was off. The reactions show that it felt like playing down the trauma the AG caused and insinuating Armenians today as "a bit oversensitive" or abusing the term genocide.
I'm not saying it is. I'm not Armenian. I am not traumatized. It's not on me to say how others are feeling. But the reactions suggest that.
Finally, let me add that in many ways this goes much further than what significant parts of modern day Turkey would say. I can only speak unscientifically and based on anecdotal evidence, but...
most of the many Turkish friends I have very much recognise the genocide as what it is. They understand that relations to their neighbor #Armenia are bad, because their current government prevents the trauma caused by the Young Turks to be addressed.
They are saying things like "Armenians hate us, because our president won't finally apologize and allow reconciliation".
I also do know Turkish people who insinuate that Armenians using the term genocide as a political phrase - but I'd never chose to side with that part of TR.
I hope one day we will all become more empathic for the unspeakable horrors others or their forefathers endured and how it shapes the modern world. In the colonial context, in the context of genocides and in any context. Empathy is the first step to reconciliation, imho.
END
You can follow @SaschaDueerkop.
Tip: mention @twtextapp on a Twitter thread with the keyword “unroll” to get a link to it.