Read on Twitter
Indian Point shut down its last reactor today, taking an annual amount of clean electricity generation offline similar to that of all wind + solar in the state of New York.

Even if replaced by wind/solar (and it won't be for yrs), this is counterproductive for climate. (THREAD) 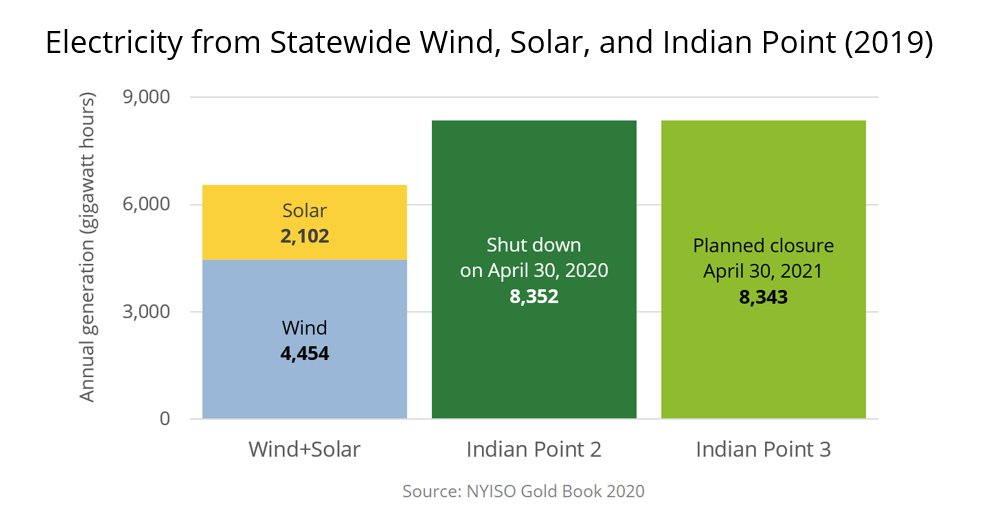 It takes additional carbon emissions + materials to replace existing nuclear. Wind + solar of course avoid **far** more emissions over their lifetime than they 'emit' when manufactured, but this is still **extra** CO2 paid to replace already-running clean energy. (1)
As I pointed out in a thread a while back, "we'll replace nuclear w renewables" in practice means inequitably offloading guaranteed climate, enviro, health costs onto communities elsewhere out of concern over infinitesimally miniscule local worries. (2) https://twitter.com/wang_seaver/status/1326611941083680768?s=20

Claims that lost nuclear can be fully replaced by other clean energy are just excuses. If you just built renewables *AND* kept existing nuclear, you'd be a lot further towards climate goals.

Instead, shutting down nuclear and replacing with renewables = running in place. (3)
When it comes to Indian Point, inevitably critics retreat to talking about how costly nuclear can be to keep running.

Indian Point Energy Center, a nuclear power plant 35 miles (57 kilometers) from the heart of Times Square, shut down its last reactor. New York will lose its biggest source of carbon-free energy, and...

https://earther.gizmodo.com/rip-indian-point-nuclear-power-plant-1962-2021-1846792886
"That’s an important slice of the pie that’s going away. The bad news is our grid is going to get dirtier before it gets cleaner,” said John Mandyck, the CEO of the Urban Green Council. (5)
Forget flight shaming, or going vegan. Supporting the extended operation of as much existing clean nuclear power as possible is really one of the more influential individual actions you can take on climate. (6) https://www.iea.org/data-and-statistics/charts/cumulative-co2-emissions-avoided-by-global-nuclear-power-in-selected-countries-1971-2018
Cumulative CO2 emissions avoided by global nuclear power, 1971-2018 – Charts – Data & Statistics -...

https://www.iea.org/data-and-statistics/charts/cumulative-co2-emissions-avoided-by-global-nuclear-power-in-selected-countries-1971-2018
It would be even better for climate if we could address the deep-seated aversion of many enviro orgs towards any nuclear, existing or new. That's often how we get counterproductive retirements in the first place. (7-END)

You can follow @wang_seaver.
Tip: mention @twtextapp on a Twitter thread with the keyword “unroll” to get a link to it.