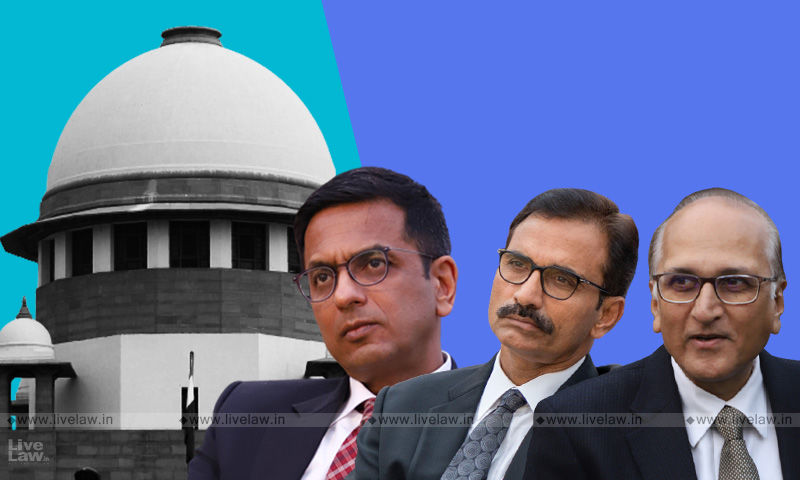 On the last hearing date, April 27, the bench had sought the response of the Central Government on issues such as - oxygen supply, availability of drugs like #Remdesivir, vaccination pricing policy etc.
#COVID19 #SupremeCourt
"The government shall explain the rationale for differential pricing in regard to vaccines sourced by the Union government on one hand and the states on the other hand", the Court had directed the Centre.

The Supreme Court on Tuesday asked the Central Government to explain the rationale behind the pricing policy for COVID vaccines in the suo moto case taken on the issues related to COVID19. The...

https://www.livelaw.in/amp/top-stories/supreme-court-asks-centre-to-explain-rationale-of-covid-vaccine-pricing-173205
The bench had also clarified that the suo moto case was not intended to stop the High Courts from dealing with #COVID19 related issues in their jurisdictions. The SC said that it was focusing on larger, inter-state issues. https://www.livelaw.in/top-stories/supreme-court-suo-moto-case-covid19-high-courts-national-crisis-173192
[COVID19 Suo Motu Case]'During National Crisis Supreme Court Can't Be A Mute Spectator, Our...

Supreme Court has on Tuesday observed that the objective of suo moto proceedings taken up by the Apex Court is not to supplant the High Courts or to take over from High Courts what they are doing. ...

https://www.livelaw.in/top-stories/supreme-court-suo-moto-case-covid19-high-courts-national-crisis-173192
Supreme Court bench of Justice Chandrachud, Nageswara Rao and Ravindra Bhat starts hearing the SUO MOTO case on #COVID (IN RE DISTRIBUTION OF ESSENTIAL SERVICES AND SUPPLIES DURING PANDEMIC).

Bench waits for the SG to re-join.

Justice Chandrachud asks if there can be a software to give real time updates about oxygen allocation.

#SupremeCourt #COVID19 #Oxygen #Vaccines
The bench asks if the Centre has considered using the powers under Section 92 of Patents Act for compulsory licensing of the COVID vaccines.

#SupremeCourt #COVID19 #Oxygen #Vaccines #Remdesivir
The bench asks the Central Government why it is not buying 100 percentage of COVID vaccine doses as it is in a better place best place to determine equity and disburse.

#SupremeCourt #COVID19 #Vaccines
Supreme Court observes that new variant is not getting detected in RT-PCR tests. Medical centres are driving away patients without positive report or charge high sums. How is this being regulated? SC asks.

#SupremeCourt #COVID19 #Vaccines
Supreme Court says that private hospitals in Gujarat are not admitting patients if they don't come on ambulance after dialing 108. What is the policy regarding this? SC asks Centre.

#SupremeCourt #COVID19 #Vaccines
How is the Centre trying to regulate the high cost being charged to admit and treat #COVID patients. Is it left to states to determine the charges? Supreme Court asks Centre @MoHFW_INDIA

#SupremeCourt #COVID19 #Vaccines
BREAKING : Supreme Court flags the issue of threat of coercive action against people putting SOS calls on social media.
"We want to make it very clear that if citizens communicate their grievance on social media and internet then it cannot be said its wrong information", SC says.
"We don't want any clampdown of information. We will treat it as a contempt of court if such grievances is considered for action.
Let a strong message go to all the states and DGP of states", Supreme Court says in strong words.

#COVID19.
"As an officer of the Court, I fully agree with what your lordships have said", Solicitor General Tushar Mehta says.

#COVID19 #SupremeCourt
Justice Rao says all thes question need not be considered as talk to centre. These are all directions in areas where the court has to intervene. we are in a time of crisis.

Justice Rao requests not to treat this as 'adversarial litigation'
"We are only trying to help the executive so that health of citizens is protected", Justice Rao says.

#SupremeCourt #COVID19
Justice Ravindra Bhat says that India was at the forefront in TRIPS negotiations on compulsory licensing and adds "this is the most important case for the same".

#SupremeCourt #COVID19
Justice Bhat says that though Centre says in its affidavit that there are 10 PSUs who can manufacture and get licenses for the vaccines, Rs 4500 crores were given to vaccine manufacturers.
"We don't know what was that grant", Justice Bhat says.
#SupremeCourt #COVID19 #Vaccines
Rule 19 and 20 of Drugs Price Control order mandates you to control the price of drugs, whether you procure or not let states get it from you - Justice Bhat tells Solicitor General.

#SupremeCourt #COVID19 #Vaccines
Justice Bhat flags the issue of differential pricing of vaccines. Says manufacturers are charging Centre Rs150 but 300 or 400 to states.
#SupremeCourt #COVID19 #Vaccines
"Why should we as a nation pay this? The price difference becomes 30 to 40,000 crores. There is no point for price difference. We are not directing it but you should look into it", Justice Bhat tells Solicitor General on differential pricing for COVID vaccines.

#SupremeCourt
AstraZeneca is providing vaccines at far lower price to the US citizens then why should we be paying so much? Justice Ravindra Bhat asks Centre @MoHFW_INDIA .

@SerumInstIndia
Medical professionals are reaching a breaking point. We cannott just say they are #Covid warriors. Look at how nurses are dying. They play a vital role. Its time we speak about them and express gratitude - Justice Bhat.
#SupremeCourt #CovidVaccine
Justice Ravindra Bhat urges Solicitor General to use his powers as Solicitor General to ensure that medical professionals who are doing more are paid more.

"Dont leave it to the manufacturers. How will they determine equity?. Invoke your powers to see that additional facilities are created for vaccine manufacturing", Justice Chandrachud tells SG.
Solicitor General tells the bench that 60% of people who are briefing him are #COVID positive.

"Officers who sat with me till 1 am are covid positive. This is an issue facing the nation and we must respond as a nation", SG tells bench.
Court has earmarked certain areas on which we have to respond. Some of the issues your lordships have cited are new or have policy ramifications. It would not be advisable for me to immediately respond - Solicitor General tells bench.
"Government is always open and do all needed for citizens"- Solicitor General tells the bench.

#SupremeCourt #COVID19 #Oxygen
Our hearing must make a difference. Tell us how much oxygen will be made available to critical states : Justice Chandrachud.

#SupremeCourt #COVID19 #Oxygen
Solicitor General tells the bench that no country will face the kind of demand for liquid medical oxygen which India is facing.

SG adds that issue of Delhi is being debated in Delhi High Court.
Centre is doing all its best to extract oxygen from wherever possible; transportation and logistics to be handled at state level - SG.
SG says that Delhi may be finding difficulty to lift allotted quantity due to logistical problems, shortage of tankers etc. More and more tankers will ease problem.

SG says he has a letter from a supplier who has offered to give 200 MT but Delhi is not lifting it.

What is the solution? Justice Chandrachud asks.
SG says the issue is mostly because Delhi is a non-industrial state(so no oxygen being produced there and oxygen needs to be brought from outside states). Centre is providing more tankers, SG says.
SG says some philanthropic industries are being involved to get tankers and oxygen on war footing.
"There is no oxygen shortage. But availability in some areas might be deficient because of inadequate lifting by states', SG tells Supreme Court. SG says 10000 MT of oxygen is available when bench said average demand is 8500 MT per day.
Justice Chandrachud points out that Delhi was allocated 490 MT of oxygen though the revised demand was 700 MT.

#SupremeCourt #Oxygen
Justice Chandrachud to SG - "If there is a 200 MT deficit then you should give that straight away to Delhi. Centre has an important responsibility as far as citizens of Delhi is concerned.
You have said surplus is there in steel sector, then use that and supply to Delhi"
"Delhi is a non-industrial state like Goa, Uttarakhand and everybody cannot be on same board", Justice Ravindra Bhat.

#SupremeCourt #Oxygen
Justice Chandrachud says between Monday and Friday there are 500 deaths.

Solicitor General says 500 deaths are not due to lack of oxygen supply.

'But we have to do something', Justice Chandrachud says
"Delhi represents the nation and there is hardly any one ethnically Delhite. Forget about someone not lifting oxygen. You have to push through since you have to save lives Mr Solicitor. You have a special responsibility as the Centre", Justice Chandrachud.
Solicitor General says that the Centre is walking a tight rope. Diverting a tanker means that supply to elsewhere will be cut short.
As a national authority which has a responsibility to the national capital you are answerable to the citizens - Supreme Court tells Centre.
Bench says private intervenors seeking for GST relief, compulsory licensing etc approach the amicus curiae and amicus will prepare a note with their suggestions.
Former Law Minister Ashwini Kumar @DrAshwani_Kumar says he had written to CJI few days back about banning political and religious gatherings. Kumbh mela, other melas and panchayat elections are going on, he says.
Bench rises for lunch. Will resume at 2.30 PM.
You can follow @LiveLawIndia.
Tip: mention @twtextapp on a Twitter thread with the keyword “unroll” to get a link to it.