https://www.eventbrite.ca/e/charting-the-strategic-path-out-of-covid-19-a-public-panel-discussion-tickets-151736922219
One of the topics tonight will be an "elimination" strategy to #Covid19 which is aggressive suppression of transmission ( #CovidZero) like NZ. This isn't eradication but strong policy. Vs the mitigation approach we see in BC/Canada. #COVID19BC
#CovidZeroBC
Then there's the "Canadian Shield" approach devised by a number of experts - broadly similar to elimination approach, but some have asked if it gives all the benefits of elimination. #COVID19BC
#CovidZeroBC
#cdnpoli
Acc to a Lancet review, elimination countries perform better on economics and civil liberties - slides: #COVID19BC
#CovidZeroBC 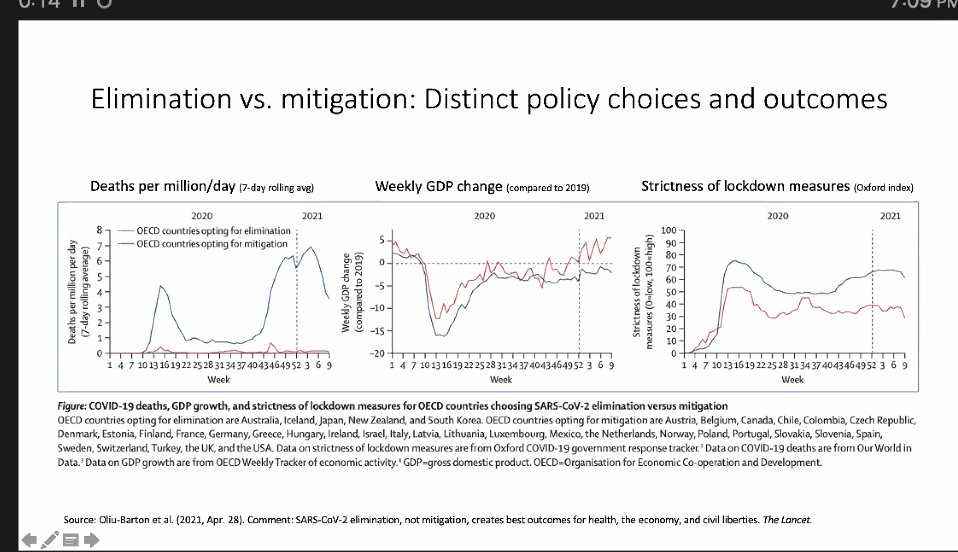 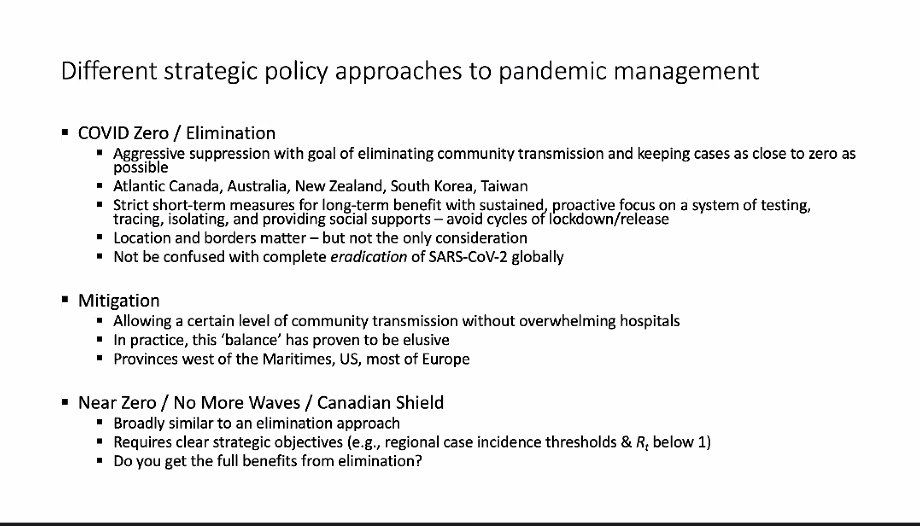 Intros - going too fast to cover but again, check the panel info. https://www.eventbrite.ca/e/charting-the-strategic-path-out-of-covid-19-a-public-panel-discussion-tickets-151736922219
Charting the Strategic Path Out of COVID-19: A Public Panel Discussion

https://www.eventbrite.ca/e/charting-the-strategic-path-out-of-covid-19-a-public-panel-discussion-tickets-151736922219
First speaker is Dr. Carolyn Colijn, Canada 150 chair in Math, SFU. The next few months are critical. Finally we have a shiny new tool in the toolkit (vaccines). We haven't been using prior tools (rapid testing) but now we have vaccines to reduce transmission...
Carolyn Colijn: So far, with our mitigation strategy in BC, our only real tools have been social distancing.

Mathematical modelling is helpful because we can't afford to wait for data...
Carolyn Colijn: the bad news is that vaccines are not a silver bullet - we can't entirely return to normal even once everyone eligible has had their first shot. Modelling will help us to determine what we can safely do...
Dr. Amy Tan: @AmyTanMD Has worked as a physician in both AB and BC during the pandemic. West of Quebec we had the most warnings signs for the 3rd wave (looking at Europe). There was covid fatigue but the virus doesn't get fatigued & with increasingly transmissable variants...
Dr Tan: even with less contact we are still seeing a lot of transmission. When we talk about ICU capacity, it's not just bed and ventilator, it's specifically skilled staff req'd to fulfill a variety of functions - that is the concern re: rapid increase in ICU admissions
Dr. Tan: when ICUs are overstretched it affects all conditions, not just #covid19BC. We are lucky that we have very dedicated health workers in many diff roles, but w/ outbreaks there are no backups. We are now seeing this in Ontario. "I'm concerned BC isn't far behind" #bcpoli
Now restauranteur Nick Diamond: talking about the difficulty of dealing with patrons not abiding by #covid19BC rules. Describing one night where they decided they didn't want to fight with the public so they closed the restaurant, Saturday night & the weekend...
Nick Diamond - talking about the alleviation of stress to just shut down. He waited a day, made a comment on his personal FB page which was popular, got picked up by media & went viral. Gave him insight into the anti-mask camp...He won a lot of support but found it overwhelming..
Dr. Lisa Barrett in N.S. @LisaBarrettID, infectious disease doctor, talking about a powerful relationship between govt and non-gov bodies and the community. She says no one's calling it an elimination strategy but it resembles that. "Why wouldn't you try to eliminate it?"..
Dr. Barrett also works on another disease where the goal is elimination. Talking about how quickly they shut down in NS when they experienced even a small wave, but were able to open up to cultural activity. People were going to restaurants.. but they still kept Atlantic bubble
With the Atlantic bubble they have a strict 14-day quarantine. People were able to have a 10 person bubble safely thanks to the elimination-like strategy. But then variants appeared. if you don't test when cases are low, you don't know what's entering province, you don't know..
So NS used both rapid testing and PCR testing on asymptomatic people. "negative for the night" was a big slogan. They didn't use health resources for rapid tests - could use volunteers and didn't need a lab. There are risks if you make people overconfident but it was OK
They opened up, but then went to a double digit day, workers reentering the province. And within a few days the govt just shut things down again. Very proactive. Went up to 90 cases, then back down to 70, and they're in a circuit breaker. Schools had a lot of the cases.
Dr. Barrett: we've had businesses shut down voluntarily including Irish bars on St Patrick's day. They just said "we know what's going to happen here." We're now testing 20,000 people daily, including volunteers doing rapid tests, for several days now.
Dr. Barrett - noting the testing is finding #COVID19 in "incredibly asymptomatic people." "Our neighbours will really go down by next week. /
Dr. Kelley Lee: @profplum8. Despite claims by WHO and parts of our govt, travel is a major source of onward transmission. #Covid19BC #Bcpoli @adriandix Border mgmt, tight travel restrictions and phsyical distancing are critical...
Dr. Kelley Lee: @profplum8 Canada keeps claiming it has tight travel/border restrictions but we all know that's not true. What would a gold standard look like? Policy makers like to dismiss travel/border restrictions, slam them as oppressive, but that's not what it is..
Dr. Kelley Lee: @profplum8: think of it as not "closed" borders but proper border mgmt. It doesn't slam a door.