You may have also heard some skepticism about that number, mostly because it's based on 2010-2014 data.

(thread)
Council members, including @voteSmitherman (chair of the new Affordable Housing Subcommittee) and @goodinforcincy (member of that committee), said they want more recent data as they consider policy solutions to the housing crisis.
In response, an economics professor from the University of Cincinnati decided to take a look. He found a national report from @NLIHC to determine the shortage for the metro area - then took it step further to estimate a shortage of about 8,000 units for Cincinnati. 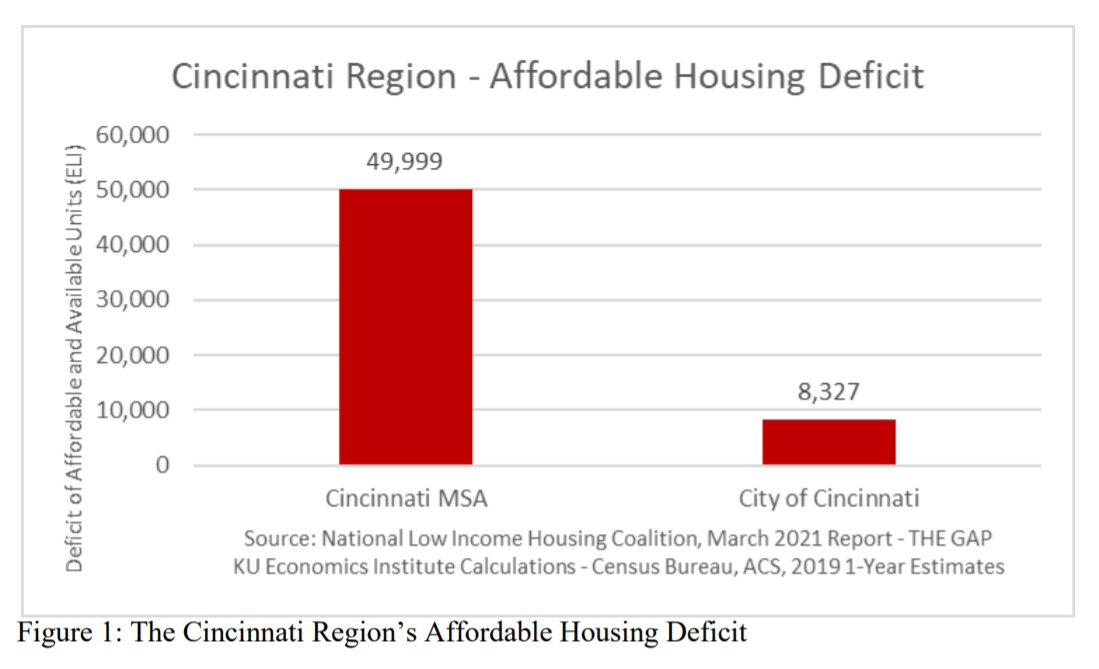 It's important to note that housing is not Prof. Michael Jones' area of research. He describes it as a "more recent interest" as discussions about policy and Issue 3 on the ballot heat up.

Also important to note that he presented these findings to the subcommittee this month.
The report was well-received. @goodinforcincy said he hopes it will inform public debate and Issue 3.

The @HamCoGOP quoted Jones in an email opposing Issue 3.

It's been citied in local news stories.
Remember that this estimate (~8,000-unit gap) was based on a national report from the National Low Income Housing Coalition.

I gave them a call and talked to one of the research analysts who worked on it.

He said, "I would not recommend the method" Jones used.
Why not?

Well it's based on a single year of census data, from 2019 (the most recent year available).

That's useful for estimates at the state level, and even the metro area, but not as reliable when you continue to slice the data into smaller and smaller geographic areas.
But another reason to doubt the 8,000 number is that it assumes the affordable housing gap will be strictly proportional to the share of all housing units, which doesn't account for variation in where the lowest income renters live in the Cincinnati metro.
Here's how that calculation was reached:

16.7% of all housing units in the Cincinnati metro are in the city of Cincinnati

Therefore, only 16.7% of the affordability gap for extremely low income renters is in the city of Cincinnati.
My conversation with Dan Threet of @NLIHC also alerted me to more recent housing data that I hadn't seen anyone report yet.

It's more recent than the 28k estimate (comes from 2013-17 data) & more reliable than the 8k estimate (uses a 5-year aggregate of data)
The data comes from HUD and @NLIHC analyzed the numbers to identify housing gaps in each metro area county, as well as the city of Cincinnati alone.

You can read more about it here: https://bit.ly/3sZXNpR 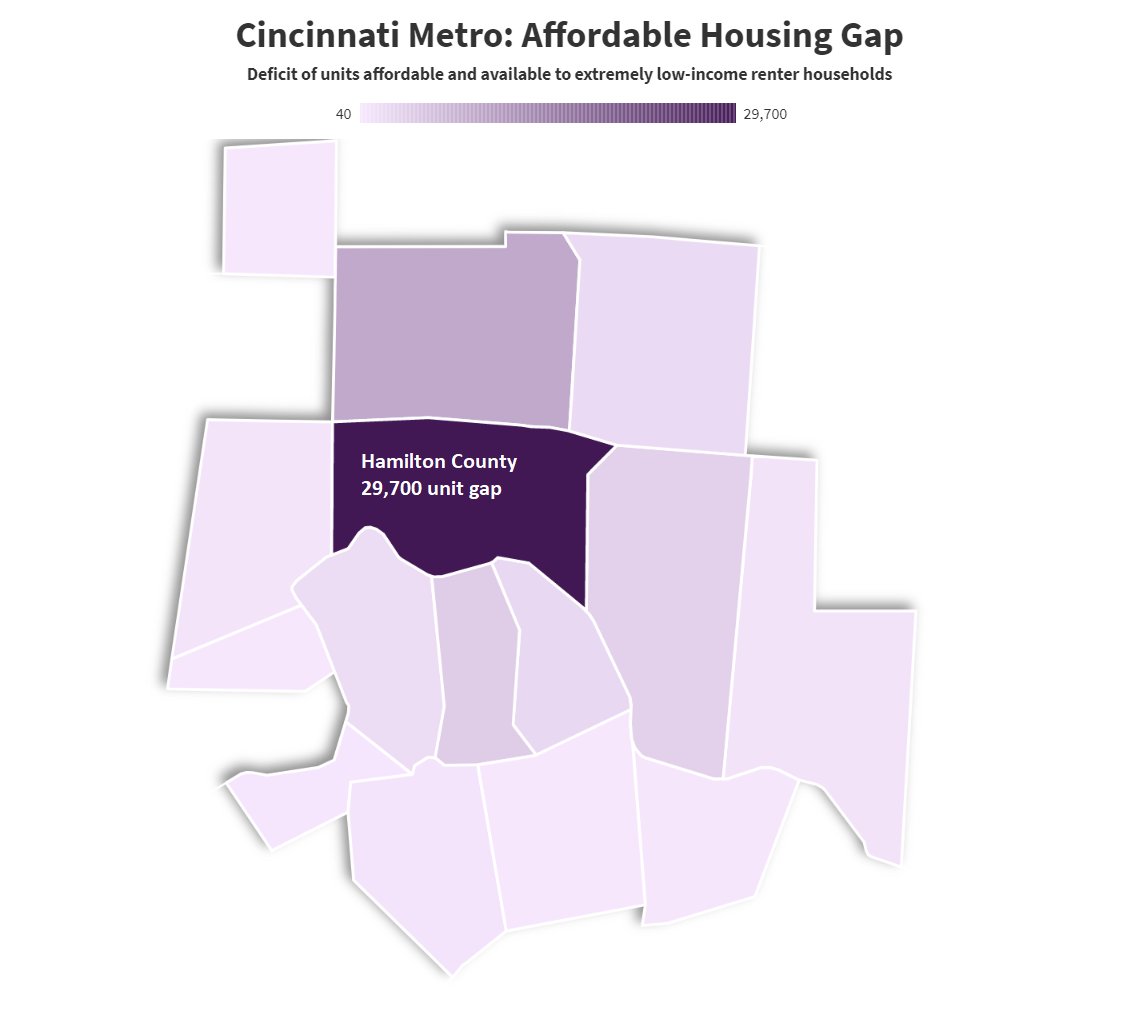 Here's a screenshot of that data, which you can interact with in the web story 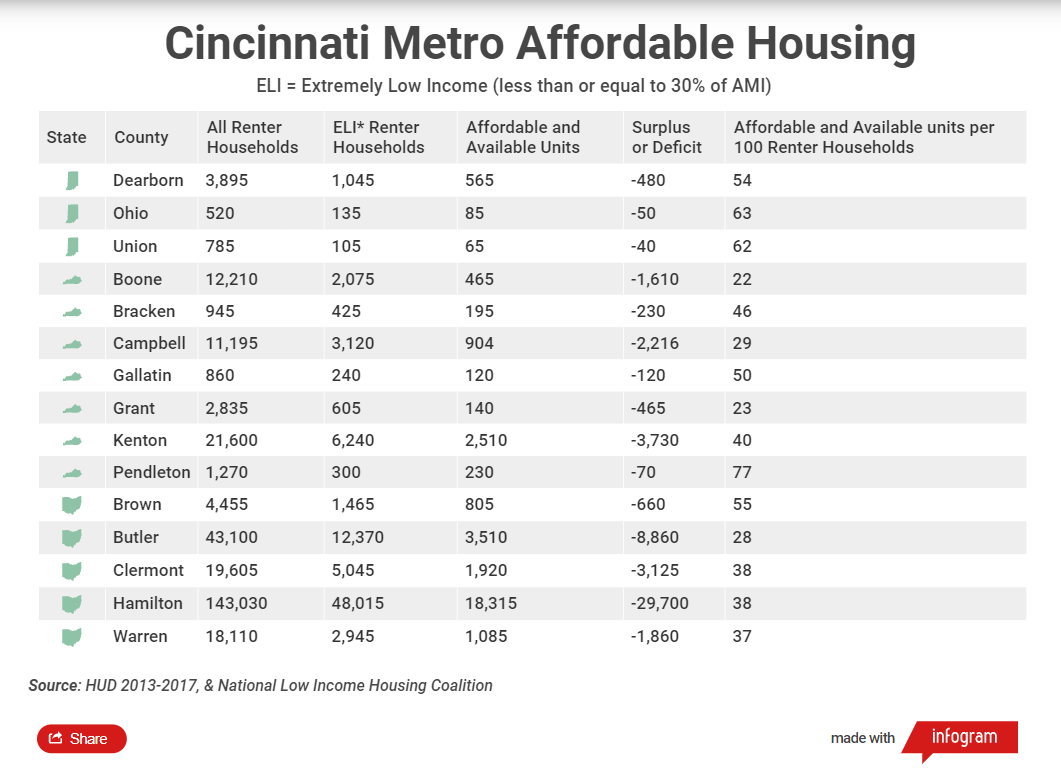 We all wanted a more recent estimate of the affordable housing gap, and now we have it.

For extremely low-income renters, there's a deficit of:

New federal data offers the most recent estimate of the affordable housing gap in Cincinnati. A report from the Department of Housing and Urban Development

New federal data offers the most recent estimate of the affordable housing gap in Cincinnati. A report from the Department of Housing and Urban Development

https://bit.ly/3sZXNpR
You can follow @becca_costello.
Tip: mention @twtextapp on a Twitter thread with the keyword “unroll” to get a link to it.