Read on Twitter
I want to describe some facts about the #SarahHalimi case that have been ignored and talk about why France refused to prosecute her killer. This case is about immigration, policing, demographics, and antisemitism.
https://twitter.com/CombatASemitism/status/1304065277718560768
#JeSuisSarahHalimi
#JusticeForSarahHalimi

Kobili Traore, Halimi's killer, a Malian Muslim immigrant, had "no previous psychiatric history but a LONG criminal record, with 22 convictions - including robbery, attempted robbery, drug-dealing, and possession of illegal arms."

A French court’s decision regarding the killer of Sarah Halimi could establish a frightening precedent.

https://www.city-journal.org/french-court-acquittal-of-kabili-traore
Acc. to Meyer Habib, Jewish member of the French Parliament, “Traoré had been sentenced more than TEN times for violent assaults, and said that if the judicial system had done its job BEFORE the murder of Sarah Halimi, the murder would have been AVOIDED.”
https://www.gatestoneinstitute.org/15448/france-jews-murder 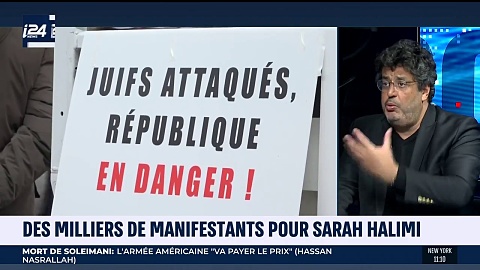 In the past, Traore repeatedly uttered anti-Semitic insults at Halimi. She & her family filed complaints & asked police to intervene.

Each time, police replied that he hadn't committed a crime, and that they didn't want to be accused of anti-Muslim bias. https://www.gatestoneinstitute.org/10513/france-islamic-antisemitism
France: Islamic Antisemitism, French Silence

https://www.gatestoneinstitute.org/10513/france-islamic-antisemitism
On April 4, 3 policemen were on the scene & heard Halimi scream, but took no action.They said it was a terror attack, which they were not equipped or authorized to handle. They waited for anti-terror unit to arrive. By the time it arrived, Halimi was dead. https://republic-underground.com/miscarriage-of-justice-in-france-over-sarah-halimis-grotesque-murder/
Miscarriage of Justice in France over Sarah Halimi’s Grotesque Murder

Background Sarah Halimi, a Sephardic French Jewish woman, was a retired physician and schoolteacher, who was living in an apartment building in Paris. In Apr

https://republic-underground.com/miscarriage-of-justice-in-france-over-sarah-halimis-grotesque-murder/
“Sammy Ghozlan, a retired police commissioner, said he feared that police may have refrained from taking action for fear of triggering violence through an altercation with a Muslim suspect, a scenario which in 2006 prompted riots across France.” https://www.israelnationalnews.com/News/News.aspx/231144
'Investigate police inaction during Sarah Halimi's murder'

Former French police commissioner: 'Police conduct suggests they had suspected a terrorist attack in progress,' but failed to act.

https://www.israelnationalnews.com/News/News.aspx/231144
"There seems to have been a feeling among officials that criminal cases involving 'community relations' might easily escalate into large-scale violence. This may account for the police’s semi-inertia on the fateful night." https://www.thejc.com/news/features/sarah-halimi-beaten-tortured-and-killed-yet-france-turned-a-blind-eye-1.443276
Sarah Halimi: Beaten, tortured and killed — yet France turned a blind eye

https://www.thejc.com/news/features/sarah-halimi-beaten-tortured-and-killed-yet-france-turned-a-blind-eye-1.443276
“In Feb. 2017, the alleged molestation by police officers of a French citizen of African descent was used as a pretext for demonstrations, riots and looting.” https://www.meforum.org/6888/france-turned-blind-eye-to-murder-of-sarah-halimi
Why France Turned a Blind Eye to the Murder of Sarah Halimi

https://www.meforum.org/6888/france-turned-blind-eye-to-murder-of-sarah-halimi
After learning Halimi’s killer was sent for psychiatric evaluations, the Halimi family demanded that police treat the crime as terror attack, not as an act of an insane person. They also accused police of trying to silence the murder for political reasons. https://www.israelnationalnews.com/News/News.aspx/227835
'They tried to cover up the terror attack'

Jewish woman in Paris attacked by Muslim terrorist and thrown from the third story to her death. The murderer shouted 'Allahu Akbar.'

https://www.israelnationalnews.com/News/News.aspx/227835
Halimi family lawyer William Goldnadel noted the murder occurred shortly before the French presidential election, and any mention of the murder at the time would not have served the interests of Emmanuel Macron, who was supported by the Muslim Brotherhood. https://www.gatestoneinstitute.org/10513/france-islamic-antisemitism
France: Islamic Antisemitism, French Silence

https://www.gatestoneinstitute.org/10513/france-islamic-antisemitism
The French media didn’t mention the Halimi killing for 2 days. The few journalists who reported on it described the killing as a "random crime" committed by a "madman". None of them said that the murderer was a Muslim and that his victim was a Jew. https://www.gatestoneinstitute.org/10513/france-islamic-antisemitism
France: Islamic Antisemitism, French Silence

https://www.gatestoneinstitute.org/10513/france-islamic-antisemitism
French govt. officials & the political class declined to comment publicly after the killing. There was concern that reporting or commenting on the Halimi murder might benefit Marine Le Pen, the leader of the anti-immigrant National Front Party, who was running high in the polls. 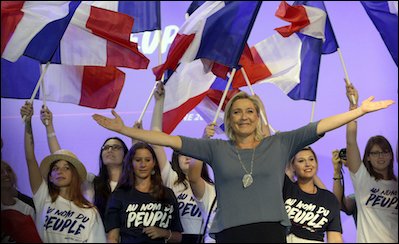 “In an open letter to the French Interior Minister, French-Jewish philosopher Alexandra Lavastine wrote that the silence around the Halimi case stems from the establishment’s desire not to offend Muslims — and to deprive Marine Le Pen of campaign fodder.” https://blogs.timesofisrael.com/from-ilan-halimi-to-sarah-halimi-frances-disgrace/
From Ilan Halimi to Sarah Halimi: France’s disgrace

https://blogs.timesofisrael.com/from-ilan-halimi-to-sarah-halimi-frances-disgrace/
In her letter, she wrote:

”As William Goldnadel, one of Halimi family’s lawyers, remarked, "if the murderer had been blond-haired and blue-eyed, all of France would have marched in the streets: he is an Islamist, so all of France hides in the woodwork.” https://blogs.timesofisrael.com/author/alexandra-laignel-lavastine/
Alexandra Laignel-Lavastine's Blog

The Marketplace of Ideas at The Times of Israel

https://blogs.timesofisrael.com/author/alexandra-laignel-lavastine/
You can follow @DanFined.
Tip: mention @twtextapp on a Twitter thread with the keyword “unroll” to get a link to it.