Read on Twitter
Responding with a thread b/c I think this sort of attitude is worth addressing.

1. You've no idea what experience this family has had with health care in Brampton before the pandemic, let alone in the midst of it being thoroughly overwhelmed. #cdnpoli https://twitter.com/robcotnam/status/1386756246192197651 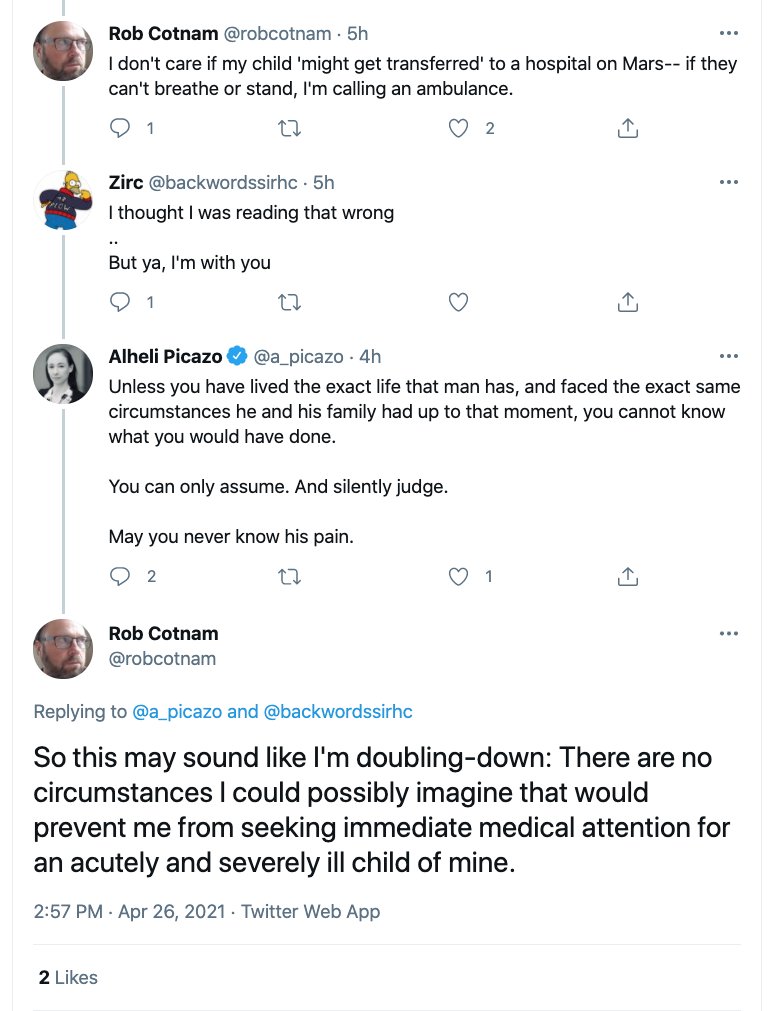 2. The father, like many parents, was clearly caring for his daughter the way he would if she were ill with a cold or flu.

How many times had he been reassured by the media or others that covid doesn't seriously harm - and certainly doesn't kill - kids?
3. That he feared the child would land in a hospital far away and be there all alone, terrified, with neither parent able to reach her is understandable, and he clearly weighed the options and made the choice he believed was best for her, her mother, her brother, and himself.
4. In 2015 (pretty sure it was) I had pneumonia, and I was alone, at home, riding it out b/c I thought it was the flu. Even return visits to emerge for fluids didn't raise flags.

One morning, I felt frighteningly awful and I asked my mom to fly to Calgary
to stay with me for maybe a week or two because things were clearly not getting better.

She dropped everything and did.

She arrived later that night, by which point I had a collapsed lung and, as we later learned, sepsis.
Had it not been for the lung collapse, she'd prob have let me 'sleep it off' (as I begged b/c I was so exhausted) and we'd make our way to emerge in the morn.

I'd likely not have made it to then, as there was quite the panic when I arrived that eve.
(pulse, BP, oxygen sat.)

5. It's easy to sit back and judge, but unless you've lived the life of someone else, experienced every moment leading up to a fateful thing, there is no certainty about how you'd have acted.

Your life, your experiences, have nothing to do with that of the grieving father here.
You can follow @a_picazo.
Tip: mention @twtextapp on a Twitter thread with the keyword “unroll” to get a link to it.