Read on Twitter
1/76: This is a very opinionated Artist’s Reflection on the social media coup d’état #allesdichtmachen ( #closeeverything) and the current status quo of the current political media-landscape within the digital realm.

2/76: In particular I reflect on the excellent Twitter-thread by Dietrich Brüggemann ( @dtrickb), covering the orthodox PR think tank-diversion tactics and framing-narratives, he played an integral part (director) in the production of said ‘Gesamtkunstwerk’.
3/76: Dietrich Brüggemann analyses the digital social media-realm, which is riddled with paid opinion trolls, forum spies, controlled opposition integrity-sabotage tactics/traps & political framing.
4/76: The psychological warfare is also conducted by the massive mass media manipulation machinery, hustling e-celebs and low/medium/high-tier influencers, who act as stooges of the Merkel regime and of the globally pushed 4th Industrial Revolution elites-gang on social media.
5/76: Transl.: "Thread on #allesdichtmachen It has hit home. To all those who are now talking about 'mockery': I'm also swearing now. You're mocking the victims. You trample on those who're now suicidal. You spit on all those who've lost their existence.” https://twitter.com/dtrickb/status/1385482312138166272

6/76: At the very end of this artistic reflection, you can find a translation of Dietrich Brüggemann's excellent analytical thread of the social media hellfire shitshow-fest that is right now going on within the digital realm (tweet 62).
For now the 1st tweet serves as a hook.
7/76: #allesdichtmachen is an organized satirical art project by originally 53 actresses and actors from the German Film Industry, which in a highly ironic way pokes fun at the insanity of failed lockdown policies and has actually hit like a bomb on social media.
8/76: The organized lockdown apparatus didn't expect this action - 𝙞𝙩 𝙝𝙖𝙨𝙣'𝙩 𝙗𝙚𝙚𝙣 𝙡𝙞𝙨𝙩𝙚𝙙 𝙤𝙣 𝙩𝙝𝙚𝙞𝙧 𝙨𝙩𝙖𝙜𝙚𝙙 𝙘𝙤𝙣𝙩𝙧𝙤𝙡𝙡𝙚𝙙 𝙤𝙥𝙥𝙤𝙨𝙞𝙩𝙞𝙤𝙣-𝙨𝙘𝙧𝙞𝙥𝙩, 𝙩𝙝𝙚 𝙨𝙝𝙞𝙡𝙡𝙨 𝙬𝙚𝙧𝙚 𝙘𝙤𝙣𝙛𝙪𝙨𝙚𝙙.
9/76: The campaign hashtag #allesdichtmachen instantly trended #1 on Twitter…
… 𝙖𝙣𝙙 𝙩𝙝𝙖𝙩 𝙬𝙖𝙨 𝙣𝙚𝙫𝙚𝙧 𝙞𝙣𝙩𝙚𝙣𝙙𝙚𝙙 𝙞𝙣 𝙩𝙝𝙞𝙨 𝙛𝙤𝙧𝙢 𝙞𝙣 𝙩𝙝𝙚𝙞𝙧 𝙨𝙘𝙧𝙞𝙥𝙩.
10/76: All 53 artist statements in German language without subtitles can be viewed here, archived via Blockchain technology at Odysee :
https://lbry.tv/@allesdichtmachen:e 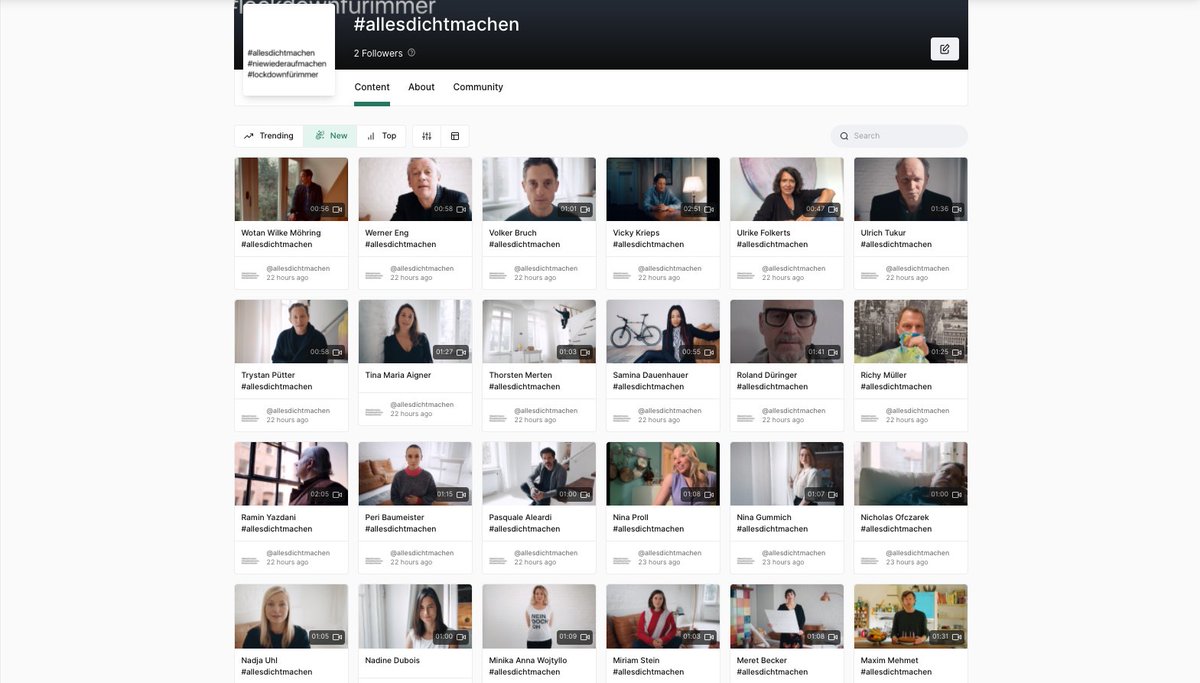 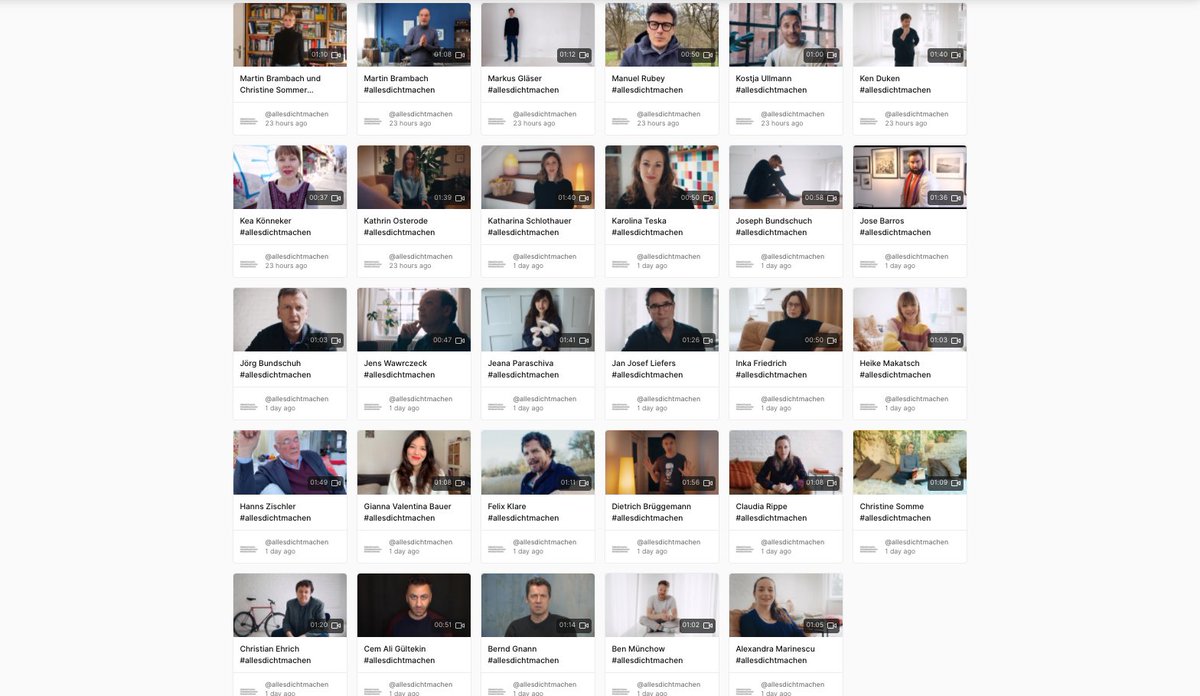 Here you will find subtitled versions of all 53 artists statements, which you can find here: https://lbry.tv/@allesdichtmachen:e This is an inofficial mirror channel of the German actor's initiative...

https://lbry.tv/@closeeverything-allesdichtmachen-english-subtitles:c
12/76: The primary hashtag #allesdichtmachen has mysteriously disappeared from the official Twitter trends-analysis, Twitter has defused the particular hashtag-trend via API manipulation.
13/76: Nonetheless, all of this cannot cash in on the resounding slap in the face of the Ageneda-gang: the artists have hit with their own weapons of choice, social engineering tactics, causing a serious rift in the agenda-matrix of the Financial & Medical Industrial Complex.
14/76: At Frankfurter Allgemeine a poll revealed that more than 48% welcomed the initiative. 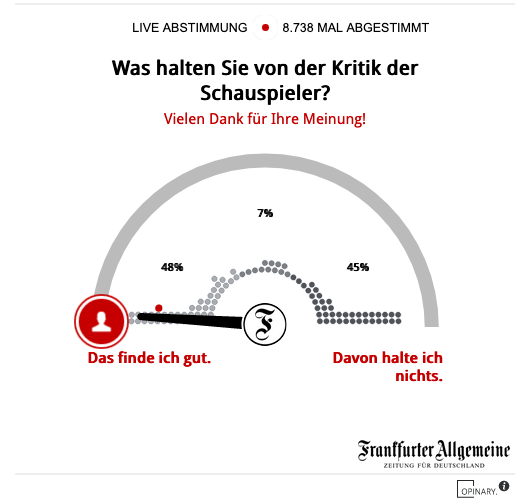 20/76: @c_drosten gives a like to a paid shills-"feels"-campaign tactic , he reversed the endorsement again (too obvious; most probably the PR think tank recommended to not show support too balantly to keep the strategic diversion coop & cover low profile). 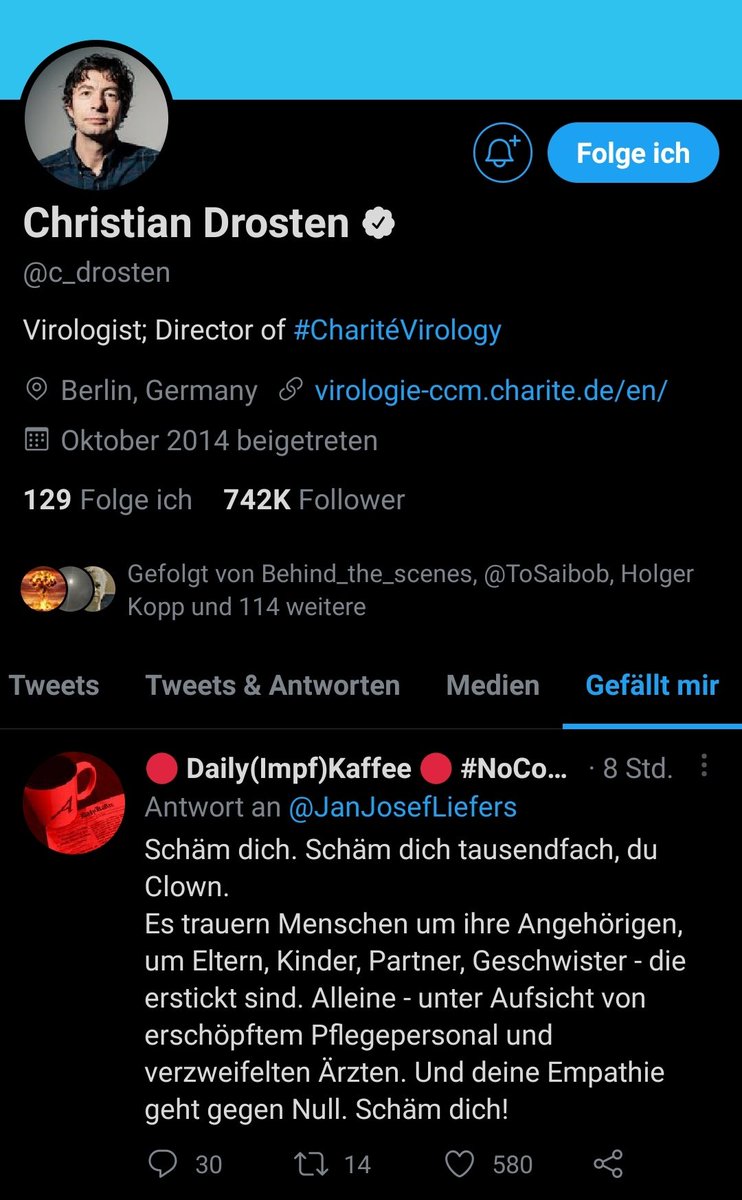 21/76: The German actors' initiative is the purest antithesis and mockery of all the global fearpr0n & paid alarmism propaganda campaigns, which are currently conducted by thousands of paid pharma shills and forum spies. ( https://archive.is/VZiH4 ). https://twitter.com/SuzeQKnits/status/1239320501190787074
22/76: Primary Umbrella orgas are major PR think tanks like @HKStrategies or @T_I_H_R.

The @WHO references an ecosystem of 263 major fact checkers-institutions/private companies globally w/ numerous subsidiary tentacles. This is the definitive war on our minds.
Graphs: @waukema 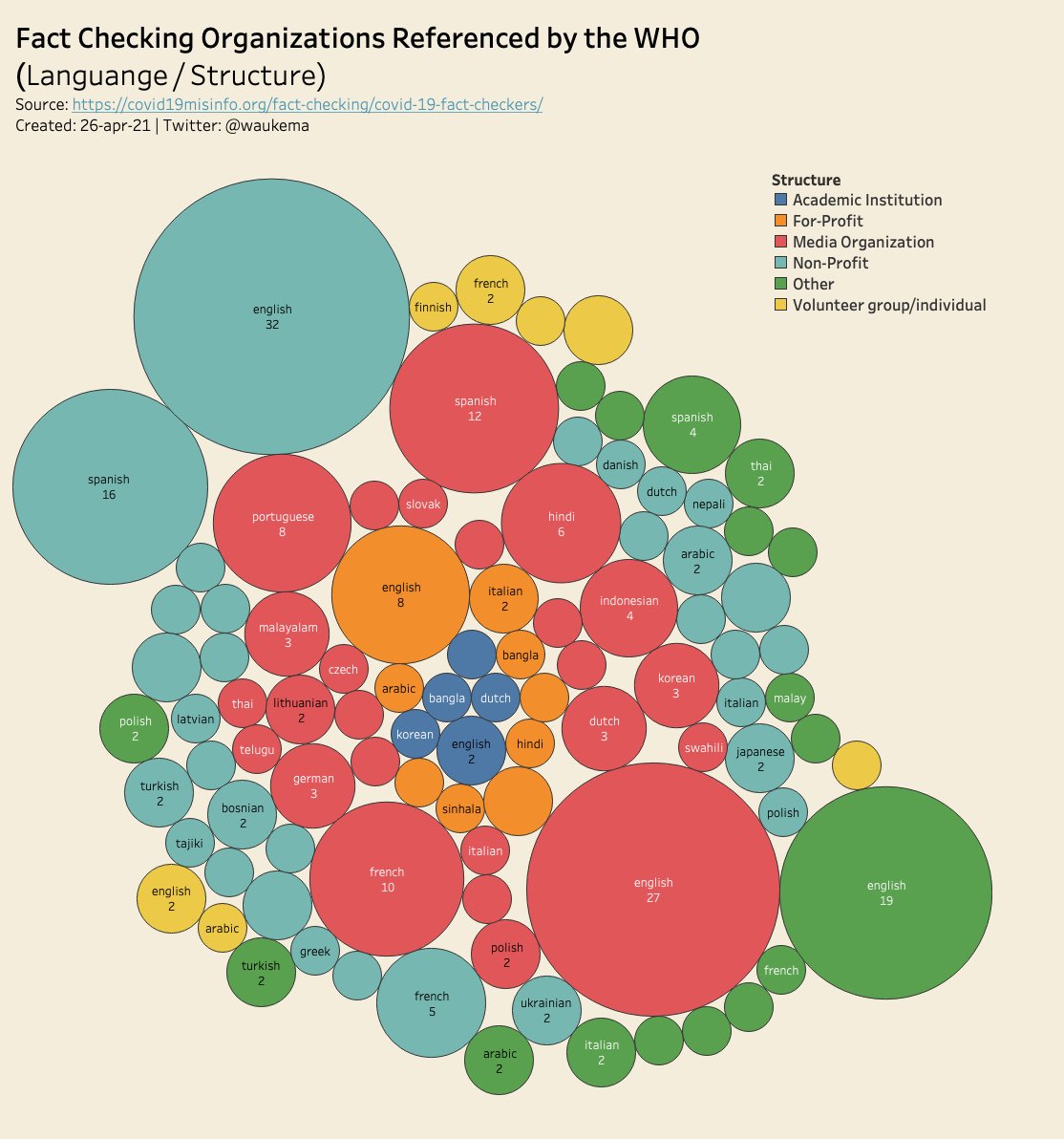 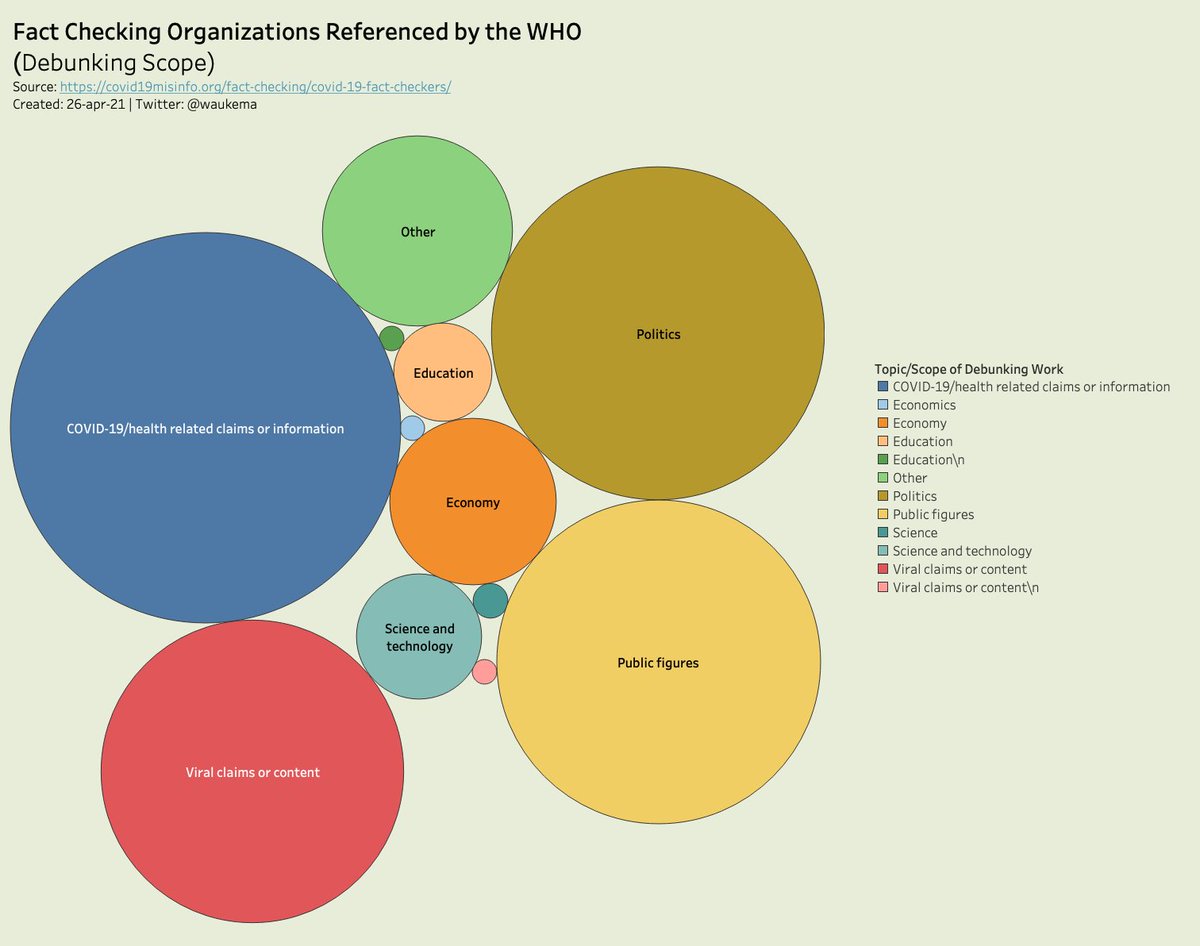 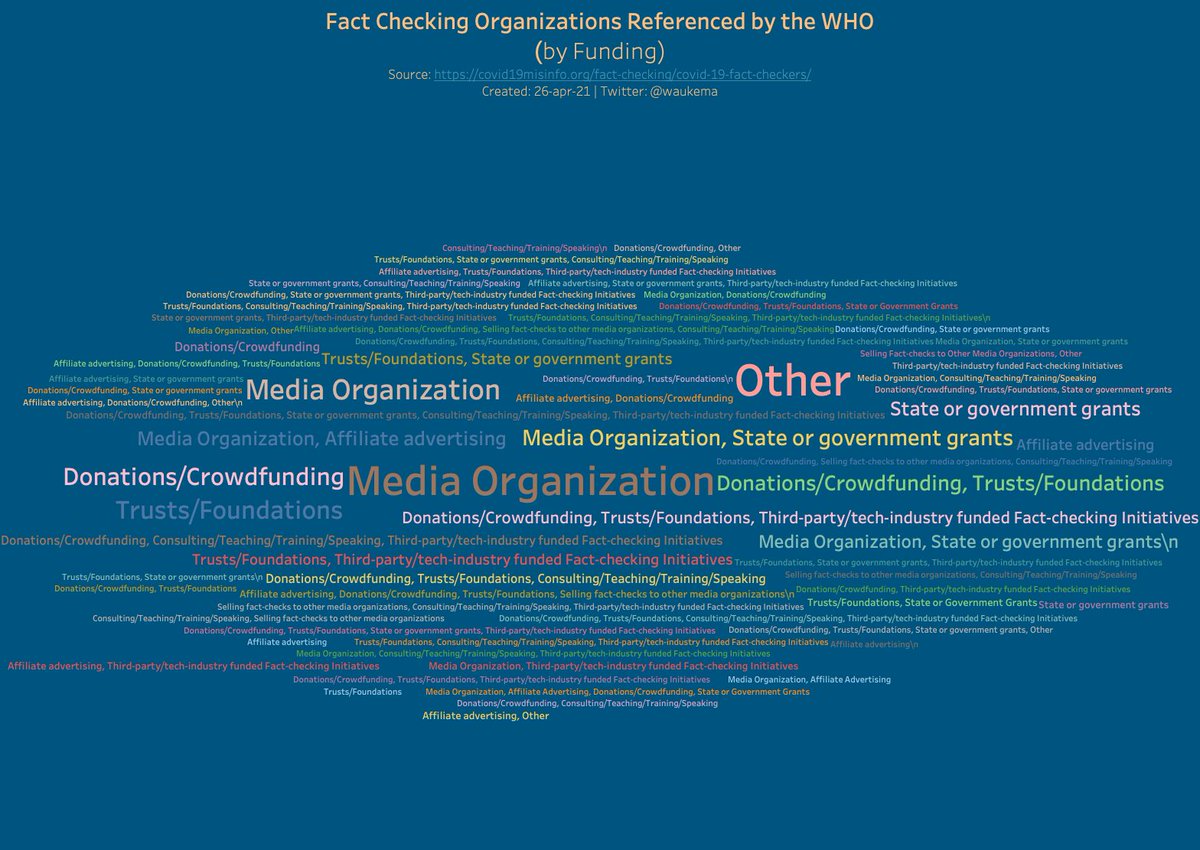 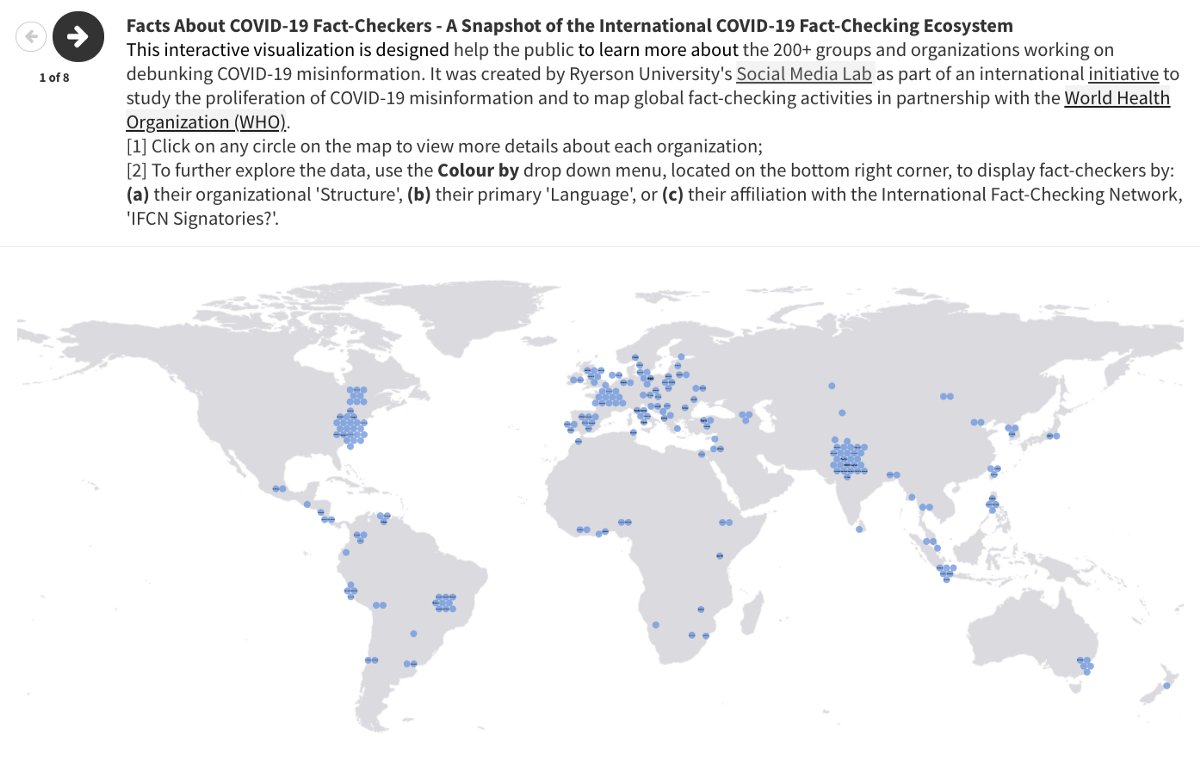 24/76: Consequently all the stops were pulled out: the actors faced death threats, slurs, character assassinations, framing, fact checker garbage clickbait-avalanches, cancel culture at its purest…
25/76: As of today, 32 of the 53 actors have remained steadfast. The others who "fell over", had to more or less withdraw their publicly visible support for the action (for understandable reasons, a military-styled psychological WW3 on your mind, it can be intimidating).
26/76: "𝙎𝙘𝙝𝙬𝙪𝙧𝙗𝙡𝙚𝙧𝙖𝙡𝙖𝙧𝙢 (𝙩𝙧𝙖𝙣𝙨.- 𝙂𝙧𝙞𝙛𝙩𝙡𝙚𝙧 𝙖𝙡𝙖𝙧𝙢): there is an opposing hypothesis that could put a spoke in the agenda's narration-wheel, and we must now strike back with the field weapons that have already been placed by us (Querdenken)."
27/76: Here, you won't find: "Hare-Rama-Hare-Krishna- put-your-masks-on - we-are-love - keep-distance - we-are-freedom - buy-mechandise-donate-a-max-of-20k-a-year-on-Ballweg's-private-bank-account - we-are-joy - cover-nose-above-all- New-Age-One-World-One-Health-One-MiddleEarth."
28/76: 𝙁𝙖𝙧 𝙛𝙧𝙤𝙢 𝙞𝙩, 𝙩𝙝𝙞𝙨 𝙖𝙘𝙩𝙞𝙤𝙣 𝙘𝙤𝙪𝙡𝙙 𝙣𝙤𝙩 𝙗𝙚 𝙛𝙪𝙧𝙩𝙝𝙚𝙧 𝙛𝙧𝙤𝙢 𝙞𝙣𝙘𝙚𝙣𝙨𝙚𝙙 𝙘𝙤𝙣𝙩𝙧𝙤𝙡𝙡𝙚𝙙 𝙤𝙥 𝙖𝙨𝙨𝙚𝙩𝙨 𝙖𝙨 "𝙌𝙪𝙚𝙧𝙙𝙚𝙣𝙠𝙚𝙣".
29/76: This is a ray of hope in the madness: The actors have investigated the Merkel regime, the #4IR-agenda, the insanity of the useless lockdowns, but especially Germany is dragged through the language art mud, rightly so. And the artists do not agree.
https://bit.ly/3jGN4gV 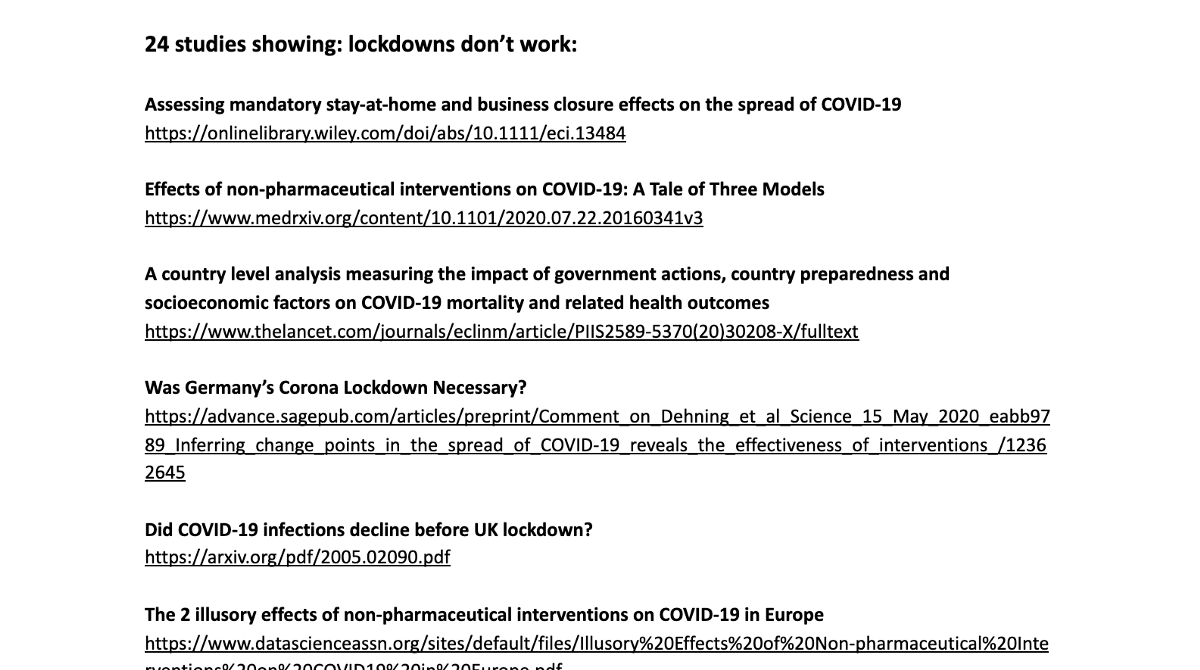 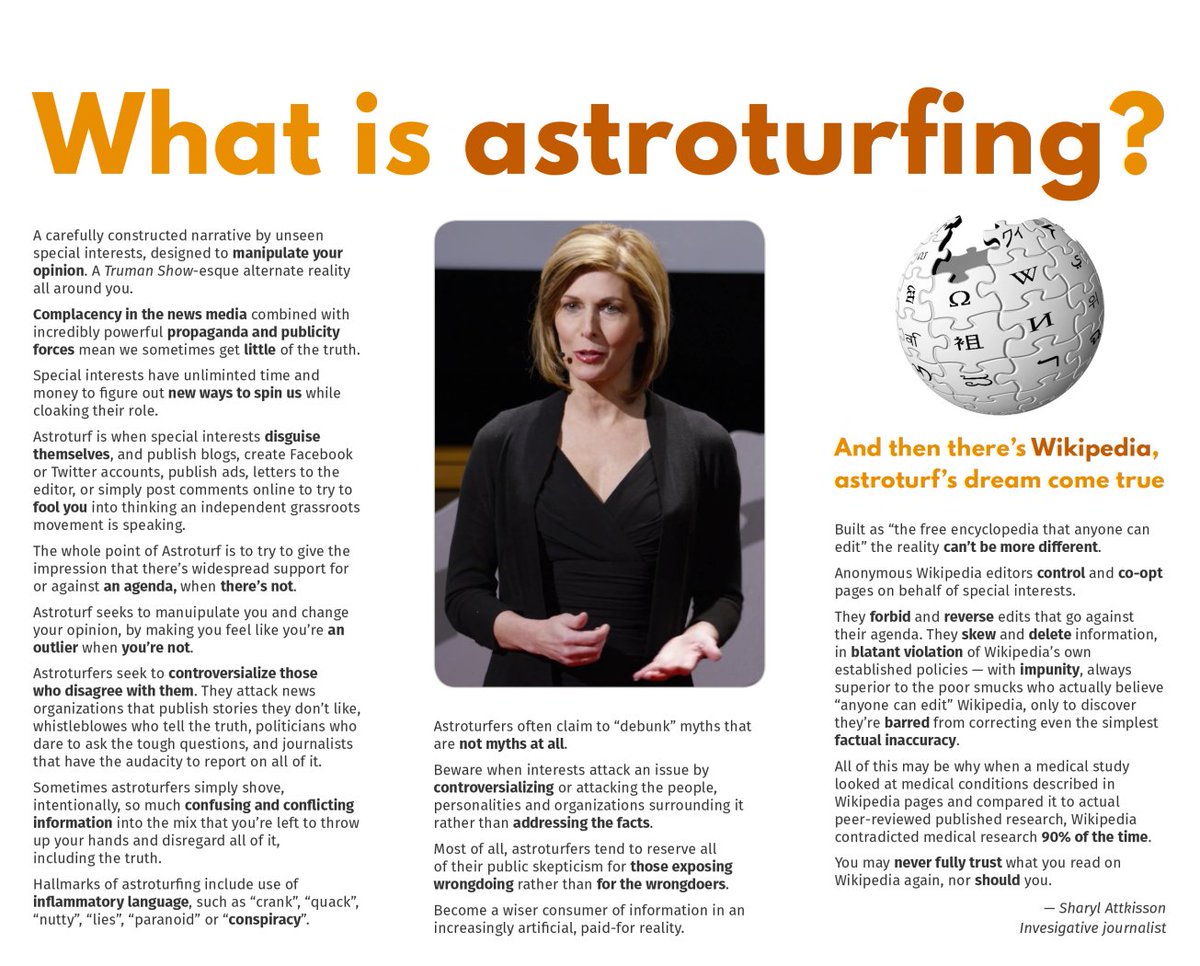 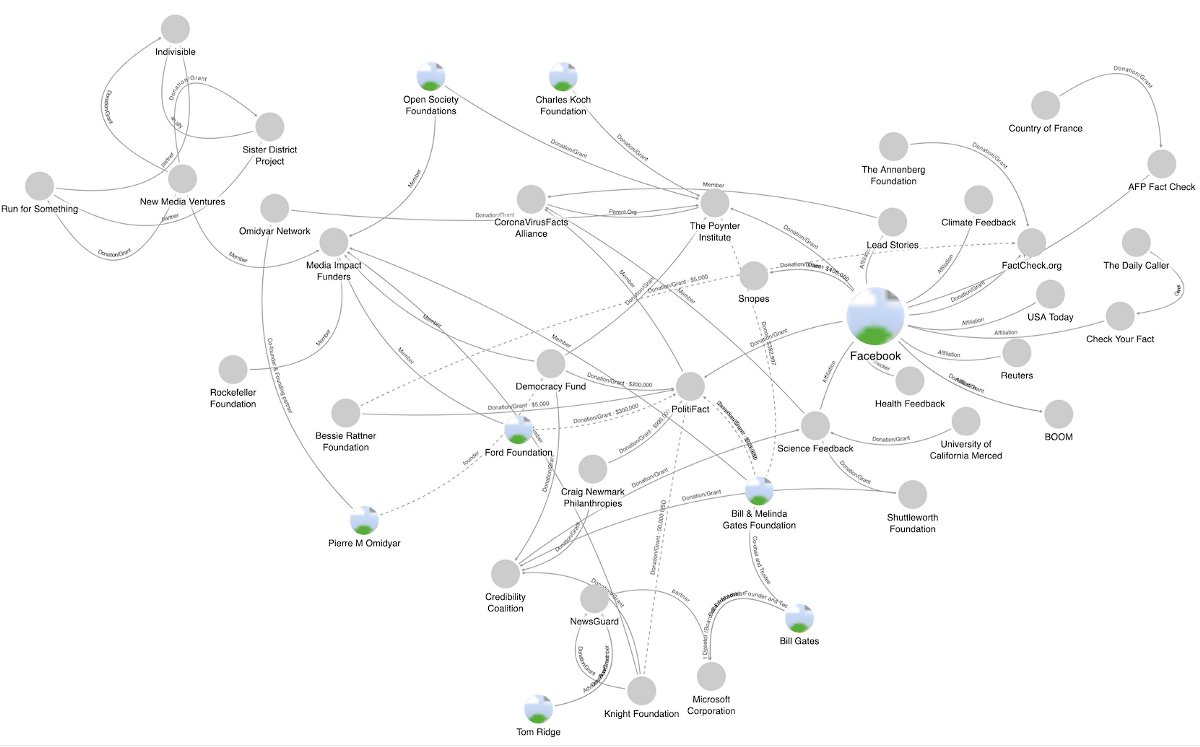 33/76: And, of course, these are non-expert's opinions, an artistic analysis of the status quo. Art was, is, and always will be able to negotiate on an equal footing with the hard sciences, that's an irrevocable fact of humanity. Those who claim otherwise are low-IQ chimpanzees.
34/76: The task of art is not to lose itself in mass discussions of irrelevant details, the task of art is to act as a corrective within an information warfare when all other institutions of a sovereign world no longer function. https://ayavela.medium.com/we-are-in-the-middle-of-an-information-war-9ae376cfbcf9
We are in the middle of an information war

https://ayavela.medium.com/we-are-in-the-middle-of-an-information-war-9ae376cfbcf9
35/76: It is the task of art to analyse evil, to pinpoint it and to make it accessible to ordinary mortals from a holistic perspective. And here we are talking about artistic intuition, which every human being evolutionarily possesses.
36/76: 𝘼𝙣𝙙 𝙞𝙛 𝙩𝙝𝙚 𝙖𝙧𝙩𝙞𝙨𝙩𝙞𝙘 𝙨𝙣𝙖𝙥𝙨𝙝𝙤𝙩 𝙖𝙣𝙙 𝙖𝙣𝙖𝙡𝙮𝙨𝙞𝙨 𝙢𝙚𝙖𝙣𝙨 𝙩𝙝𝙚 𝙗𝙧𝙚𝙖𝙠𝙙𝙤𝙬𝙣 𝙤𝙛 𝙝𝙚𝙡𝙡 𝙤𝙣 𝙚𝙖𝙧𝙩𝙝, 𝙩𝙝𝙚𝙣 𝙨𝙤 𝙗𝙚 𝙞𝙩.
37/76: Those actresses & actors know: we have already managed without CCP-lockdown-PsyOps for millennials. Moreover the Chinese Communist Party does not believe in their own propaganda, it simply wants the rest of the world to blindly follow their recommendations.
38/76: And these actresses & actors know that it's not China alone who is pulling the strings here behind the scenes, it's the gang of global financial elites, who use China as a prototype playfield and testing playground.
39/76: Much more, these artistic statements are spinal cord shattering for the transition-agenda, the most important balancing force of the sovereign (art) had delivered here a merciless artistic reflection.

They honestly disagree with the totalitarian clown world dystopia.
40/76: And yes, the reflection of art had been a long time coming, it is not easy to unravel this complex web of corruption of the international Financial & Medical Industrial Complex, the web of lies of the proposed #StakeholderCapitalism.
41/76: Sometimes artists have to act as historians, sometimes as scientific analysts and that takes time: To unravel it artistically in an investigative manner to get a full spectrum-view, to then respond successfully with the corresponding statements of political art .
42/76: Massive thought-work goes into Gesamtkunstwerk art-processes.

In the end art wants to be on the right side of history - no matter what happens in between - until the balance of forces are established again. https://twitter.com/Bobby_Global/status/1385346733882978307

43/76: The statements are meant to last forever, so it doesn't matter how many of them withdraw their official publicly visible support due to cyberbullying and cancel culture, history will give all of them their rightful place in the profound search for the ultimate truth.
44/76: These statements now shine like a sword of Damocles over the agenda timetable and these PR think tanks of the elites-gang have not yet fully mastered all the tools of social engineering of the masses, mass-hypnosis is only conditionally suitable for quick deployment.
45/76: Damage control cannot happen fast enough now, before these statements really incite the masses to break free from the hypnotic grip and to use their instincts again, gut feelings that for millions of years unerringly predict when something in the narrative is not right.
46/76: When agenda-tools such as @CorneliusRoemer is, calls for list-making of artists, then this subhuman creature simply self-exposes his profound stupidity further, and the normie thinks:

"Something is wrong here, the gut feeling tells me."

https://bit.ly/3nyVARj
47/76: Translation: "Who among the actors is on Twitter? And who do they all follow? And who are they followed by? If anyone wants to make a list, crowdsourced here? @pkreissel can analyse something like that well."
Archive: https://archive.ph/iAwpI
https://twitter.com/corneliusroemer/status/1385387926272544772
Cornelius Roemer on Twitter: "Wer von den Schauspielern ist auf Twitt… 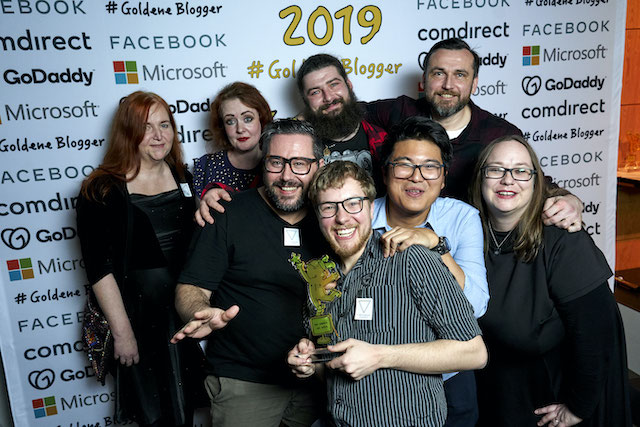 49/76: Those artists have investigated the failures at every turn so far: they see the fusion of military-like health sec. institutions ( @JHSPH_CHS), may have read the @RockefellerFdn's "Lockstep", finished "connecting the dots".
https://bit.ly/3wK5h3f
https://bit.ly/3dPvead
Rockefeller Foundation-Lockstep.pdf https://bit.ly/3wK5h3f
50/76: They have investigated Big Tech, Megacorporations and the elites-gang that have placed biofascism at the top of their poisonous agenda.
https://sustainabledevelopment.un.org/content/documents/Agenda21.pdf

51/76: They see the tyranny of the proposed "4th Industrial Revolution" micromanagement-dystopia, the corrupt fusion of science and politics, …

… 𝙖𝙣𝙙 𝙩𝙝𝙤𝙨𝙚 𝙖𝙧𝙩𝙞𝙨𝙩𝙨 𝙙𝙤 𝙣𝙤𝙩 𝙘𝙤𝙣𝙨𝙚𝙣𝙩 𝙬𝙞𝙩𝙝 𝙩𝙝𝙖𝙩. 𝙋𝙚𝙧𝙞𝙤𝙙.
52/76: They know now that the initial flood of shock images from China early last year was a finely tuned #SocialEngineering-operation by the #CCP and their western elites-collaborateurs to trap the planet into a never-ending lockdown death-spiral. https://twitter.com/Bobby_Network/status/1361395204767547395

53/76: These actresses & actors also know, after thorough self-research with full-throttled media competence: there is something wrong with the mass testing-scenarios of a healthy population, that it reeks of deliberate mischief at all corners and ends. https://twitter.com/Bobby_Network/status/1321188173913927680

54/76: They know now that hard sciences / life sciences have been hijacked by a group of corrupt pseudoscientists, shamans, pharma-bots and mindless NPCs, everything is infested with massive conflict of interests and extraordinary bad-science. https://twitter.com/Bobby_Network/status/1348742732953612288

55/76: They see the patterns of the international panic papers-Psyop and the total sell-out of the Merkel Regime to the #CCP and the 4th Industrial Revolution ( #4IR)-gang, consisting of kinky #stakeholder capitalists and full-blown psychopaths. https://twitter.com/Bobby_Network/status/1358527671613980673

56/76: They see through the sustainability grimace, they see the end goal of relentless biofascism by the means of Hegelian Dialectic. https://twitter.com/Bobby_Network/status/1377301521579266049

57/76: They see through the total sell-out of Netanyahu, who sold the people of Israel to Big Pharma, the country serves as an human experimentation-sandbox prototype for the world now. They see the peak irony in that. https://twitter.com/Bobby_Global/status/1385584022357745665

58/76: And the fear of an uncertain future for the current and follow-up generations has led to this joined strong voice of artistic reasoning, the desire to openly discuss the intended fate of the world in a public discourse, they've provided us w/ an opportunity to do so now.
59/76: Now it is up to all sectors of the arts to deal with this downward spiral, the death hypnosis and to provide the normie with an artistic analysis of the status quo.

We are in an information war, and this can only be won with the means of art.
60/76: This is not about the right or left of the political spectrum, it is about the preservation of the plurality of life itself, about each and every one of us.
61/76: Art converses on an equal footing with the hard sciences; anyone who claims otherwise is a narcissistic low IQ tyrant and should be locked up in a zoo.

PR is the antithesis of art.

Period.
62/76: The following tweets are a thread-translation (DeepL) of Dietrich Brüggemann analysis ( @dtrickb).
63/76: "1/ Thread on #allesdichtmachen It has hit home. To all those who are now talking about "mockery": I'm also swearing now. You are mocking the victims. You trample on those who are now suicidal. You spit on all those who have lost their existence.” https://twitter.com/dtrickb/status/1385482312138166272

66/76: "4/ So, enough ranting. I could now utter the usual distancing phrases, but before I do I'll fall asleep from boredom. Nazis are Nazis and self-evident things are self-evident. And what should also be self-evident:" https://twitter.com/dtrickb/status/1385482317129453568

70/76: "8/ There is plenty to criticise about a media elite that calls for ever tougher lockdown and clears every critic for firing with reference to full intensive care units. And this shitstorm comments on itself anyway." https://twitter.com/dtrickb/status/1385482323148279810

72/76: "10/ None of these videos are about the pandemic. But they do pull the wool over the eyes of the hollow pathos we've been facing for a year. They criticise the mercilessness with which everything that is now going down the drain is dismissed [...]" https://twitter.com/dtrickb/status/1385482325820153858

https://bobbynetwork.substack.com/p/an-artistic-reflection-the-social/comments
You can follow @Bobby_Network.
Tip: mention @twtextapp on a Twitter thread with the keyword “unroll” to get a link to it.