Read on Twitter
There. Is. No. Constitutional. Prohibition. On. DC. Statehood. These are bad-faith arguments in service of keeping a majority Black city unrepresented in Congress. A mini-thread. /1 https://twitter.com/tomselliott/status/1386072911719505922

2. Those who say that the constitution prohibits DC statehood argue that the document gave Congress the exclusive legislative power over "the seat of government," which was to be no more than 10 sq mi. But location of that district wasn't decided until 1790. /2
Until then, NYC and Philly served as temporary capitols. DC came about as a backroom deal to get Hamilton's funding and assumption fiscal measures through congress. See this explainer: https://www2.gwu.edu/~ffcp/exhibit/p14/
/3
The constitution provides for a seat of government *no greater* than 10 sq mi, but it did not stipulate a minimum size. Currently, HR 51 purposes creating a governing district around the capitol and immediate environs, and leaving the rest of DC as an entity to become a state /4
The Constitution never says that the seat of government can't be in a state, as the anti-statehood crowd claims. The only place I can find where that's discussed is in Federalist 43, where Madison worries about the capitol being within a state and thus dependent on that state /5
But HR 51 still addresses that problem by retaining a federal district, albeit a much smaller one. And remember, the Constitution only gives a maximum size for the seat of government, not a minimum. So legislative adjustment is perfectly legal. /6
The 23rd Amendment does stipulate the federal district controls three electoral college votes. Anti-statehood people say that if you shrink the fed district, you give EC votes to a really small number of people. To which I say: are you new here? Lemme tell you about Wyoming. /7
Yet while that might be unwieldy until taken care of, a small federal district retaining those votes via the 23rd Amendment would not be unconstitutional, just weird and inequitable. Kinda like the whole Electoral College, tbh. /8 https://thetattooedprof.com/2016/11/25/some-thoughts-on-the-electoral-college/
Some Thoughts on the Electoral College

The American Revolution embodied, despite the misgivings of many of its leaders, some profoundly radical ideas. Rebelling against the world’s most powerful monarchy and replacing its authority with…

https://thetattooedprof.com/2016/11/25/some-thoughts-on-the-electoral-college/
Most likely, the 23rd Amendment would have to be repealed. Which is perfectly kosher. The 21st Amendment repealed the national Prohibition on alcohol enacted in the 18th, for example. The 13th Amendment invalidates the protections for enslavement in the original Constitution /9
To conclude, there are legislative, not constitutional, hurdles for DC statehood. But the most significant problem is the opposition of Right wing racists who would use constitutional obfuscation to continue their program of disfranchising people of color. /10
(It strikes me as ironic that the Tea Party movement supposedly embraced the revolutionary-era motto "no taxation without representation," yet most of them oppose DC statehood, which perpetuates that exact situation! It's even on their license plates!) /11 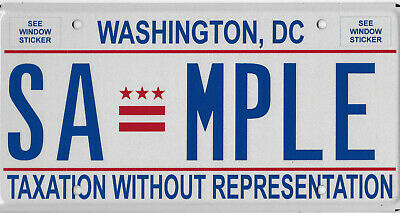 There are 700,000 Americans who are currently disfranchised by living in DC. There is no legitimate reason this should continue. There are no Constitutional reasons why DC cannot become a state. The opposition is driven by racism and partisanship, pure and simple. /12
And if any Republican bleats about how we shouldn't admit new states because it would grant a partisan advantage, ask them when they're kicking Idaho, Wyoming, Montana, both Dakotas, and Washington state out of the union. /13
Because the GOP majority rammed statehood for these barely-populated territories through congress within a span of months in 1889-90, and it was clearly aimed at increasing their Electoral College vote. /14 https://www.theatlantic.com/ideas/archive/2019/09/when-adding-new-states-helped-republicans/598243/
When Adding New States Helped the Republicans

Putting new stars on the U.S. flag has always been political. But D.C. statehood is a modest partisan ploy compared with the mass admission of underpopulated western territories—which boosts the GOP...

https://www.theatlantic.com/ideas/archive/2019/09/when-adding-new-states-helped-republicans/598243/
So: DC statehood wouldn't be unconstitutional. It can be accomplished easily and legally via legislation. There's ample precedent. The only difference is DC is majority people of color. And the Right doesn't want PoC to vote or participate in govt. That's it; that's all. /end
You can follow @TheTattooedProf.
Tip: mention @twtextapp on a Twitter thread with the keyword “unroll” to get a link to it.