This thread started out as a 10 minute YouTube video: …

What I think struck all of us this week was the stunning audacity of some of the lies coming from Republican leaders.
1/ For example, Marjorie Taylor Greene tweeted this after the Derick Chauvin verdict

Her tweet proven false in real time as residents of DC read her tweet, looked around, and posted photographs and testimonials to social media. 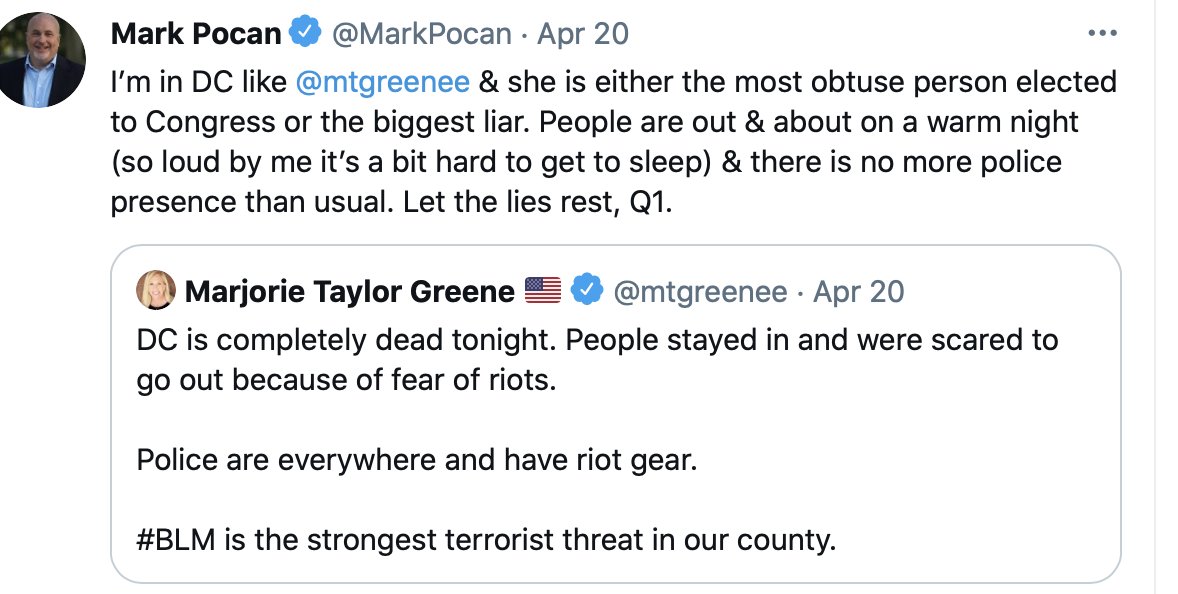 2/ A few other breathtaking lies:

A keynote speaker at a Minnesota County GOP event told attendees that George Floyd’s murder was a hoax.
https://twitter.com/atrupar/status/1386089700352475137

Or how about this one: 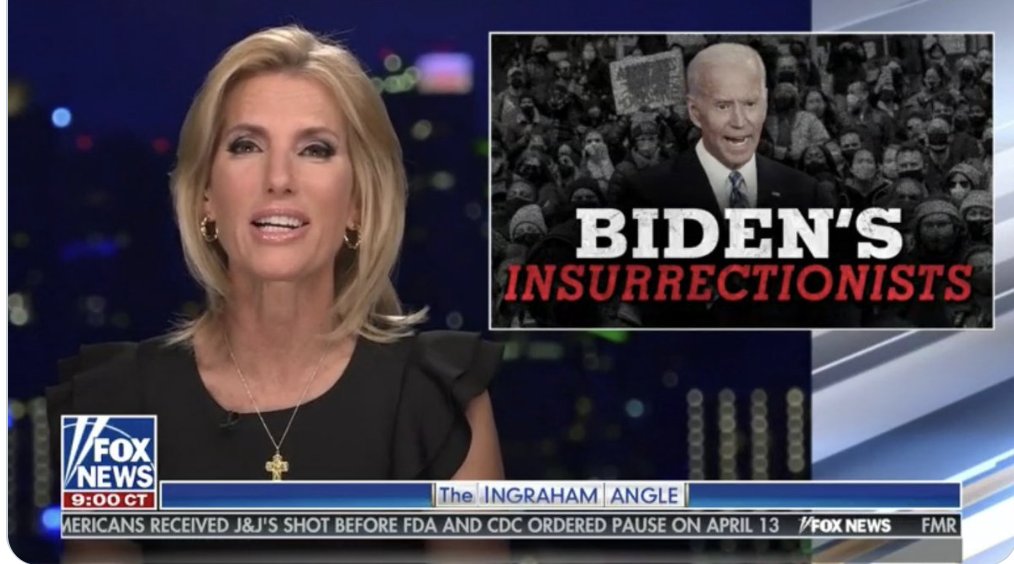 I haven’t done a Twitter Book Report for a while, so here we go.

Finchelstein takes a deep dive into how these lies work. 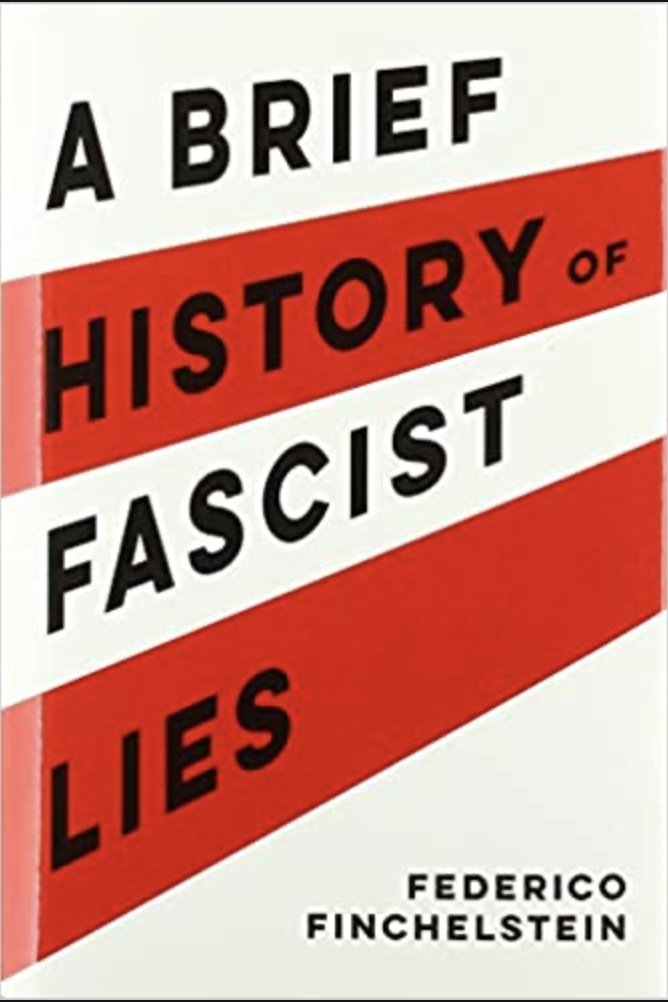 4/ One question he answers is: Do the liars know they are lying, or do they believe their own lies?

Some fascists, he acknowledges, are hypocrites who use these lies as a tool.

But not all. Some are willing to die for their lies. Why would someone die for a lie? 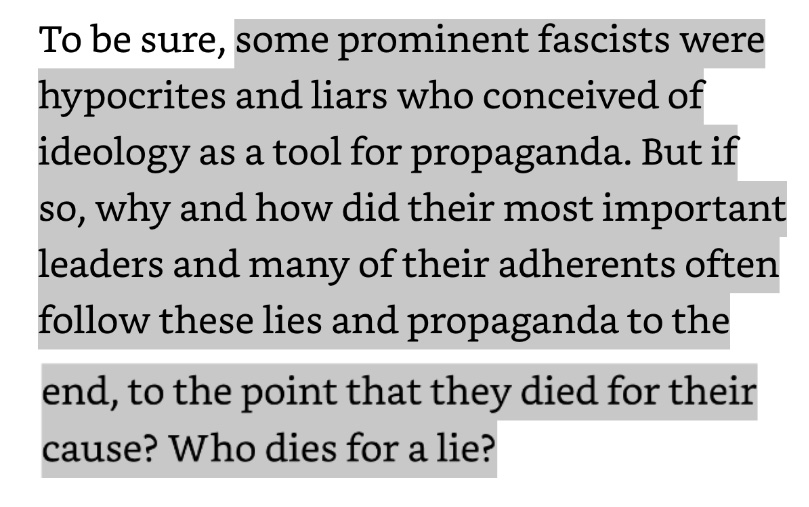 5/ Some fascists understand that they are lying in the sense that they know that their lies do not correspond to the factual world, but they believe their lies are in service to a higher truth or what Finchelstein calls a “simple absolute truth.”

6/ They intuit a "truth" about the world. This "truth" is articulated by the Leader. Then they lie in service to this higher truth.

7/ The problem is that their “higher truth” is not true.

The “higher truth” is the lie that there are superior and inferior races. It is based on the purely paranoiac fantasy that the weaker races aim to dominate the superior races.” 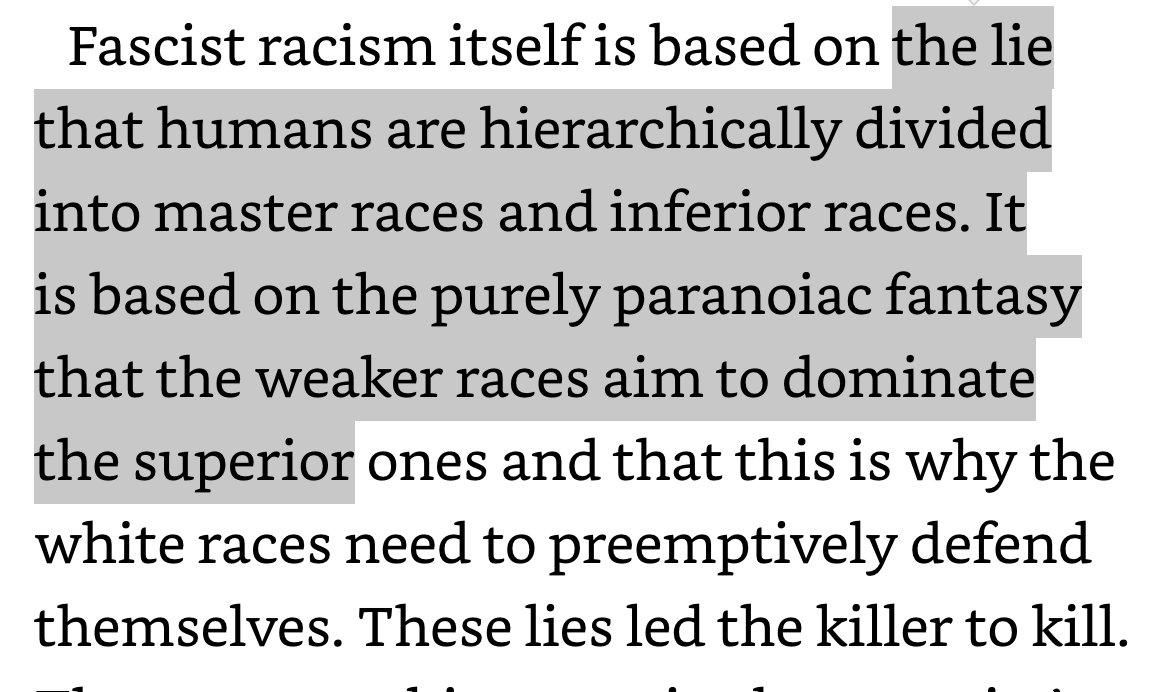 8/ This is what Tucker Carlson meant by his “replacement theory.”

This explains the Holocaust and cruelty fascists have toward minority communities: They believe they have to preemptively kill before they are killed.

They have to make sure others don't "replace" them. 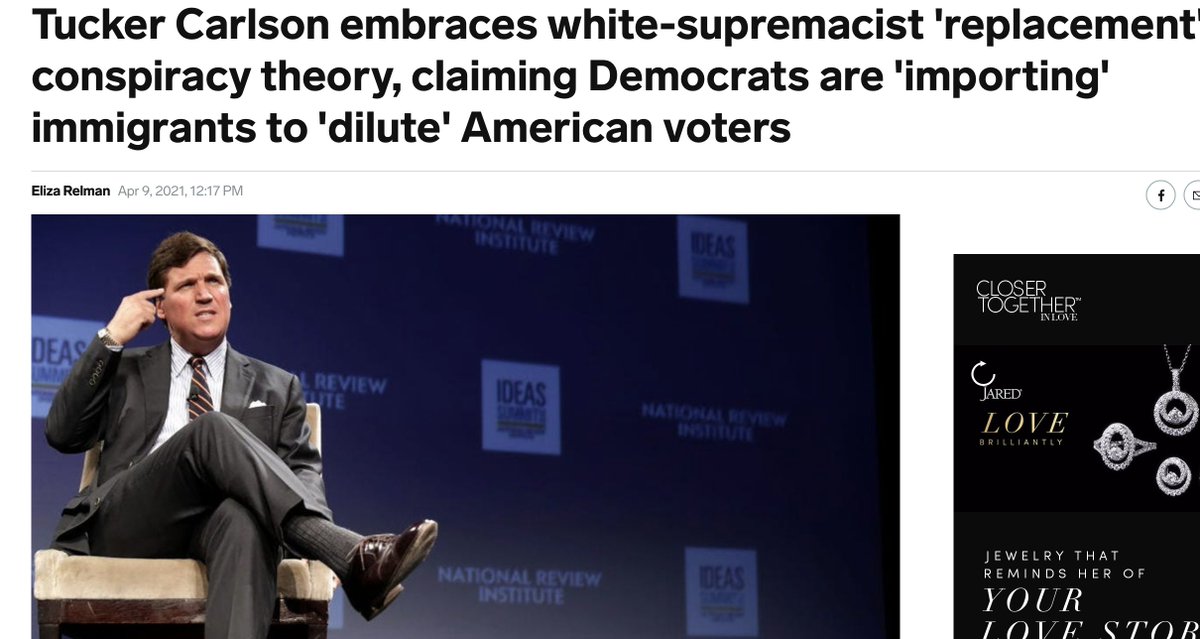 9/ It occurs to me that this may be why they're obsessed with being “cancelled.”

Finchelstein explains something interesting: They create the reality they believe already exists.

10/ Example: The Nazis first called the Jews vermin, then put them in camps where they became disease-ridden.

Another example: Police arresting Blacks for the slightest infraction while overlooking the wrongdoings of whites, creating a “high crime rate” among Blacks.
11/ Given that the fascist view is that people are hierarchical and those at the bottom are constantly seeking to displace those at the top, it makes sense that they reject democracy, which they see as a “lie.” 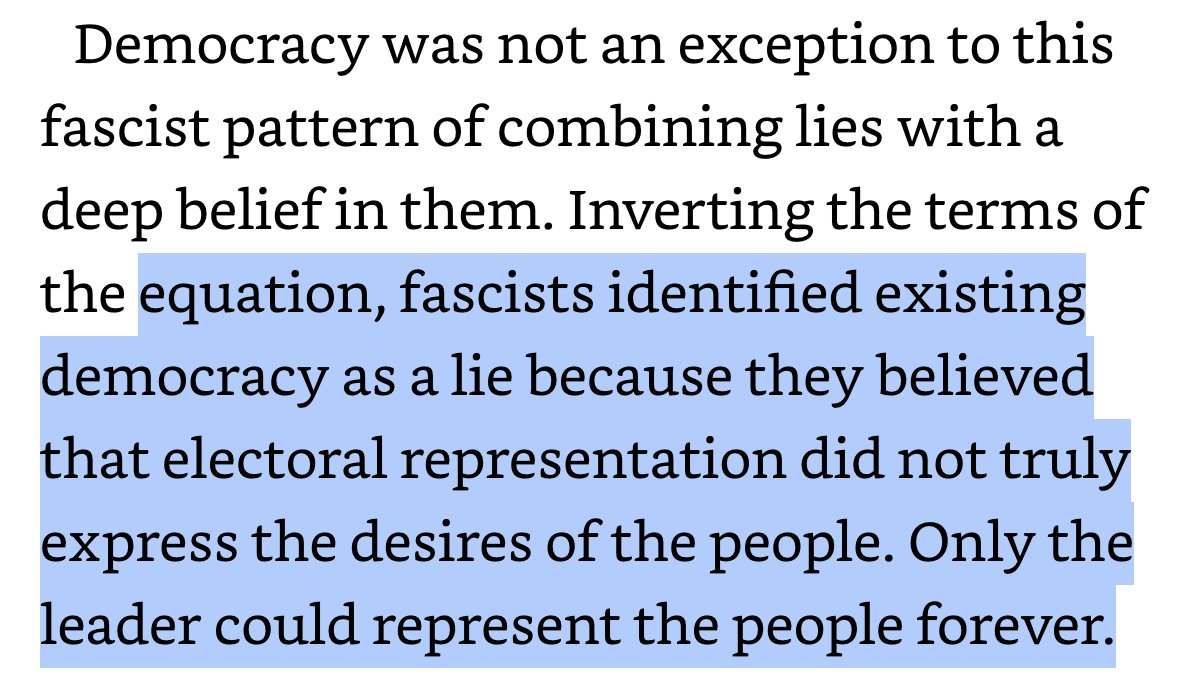 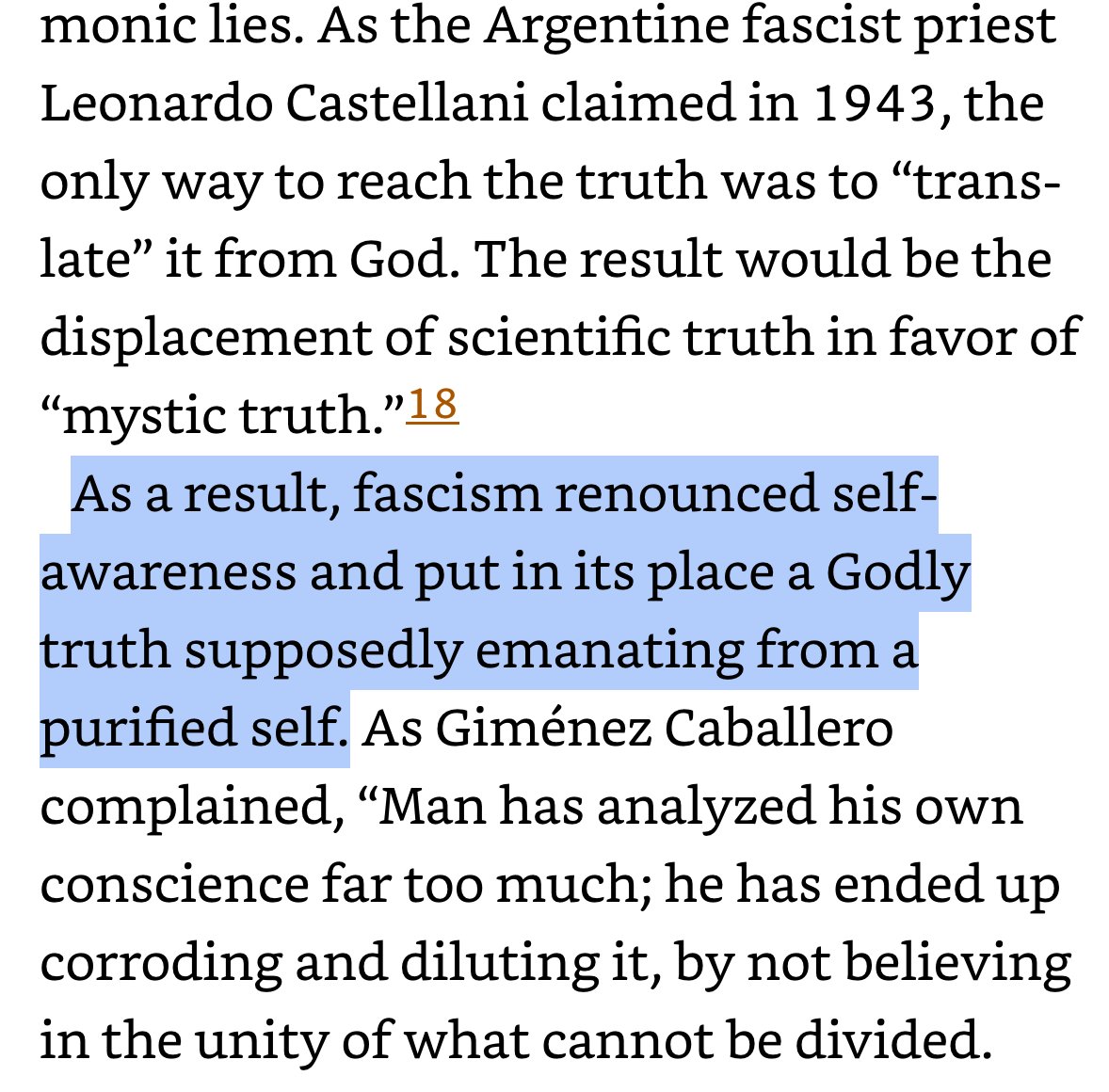 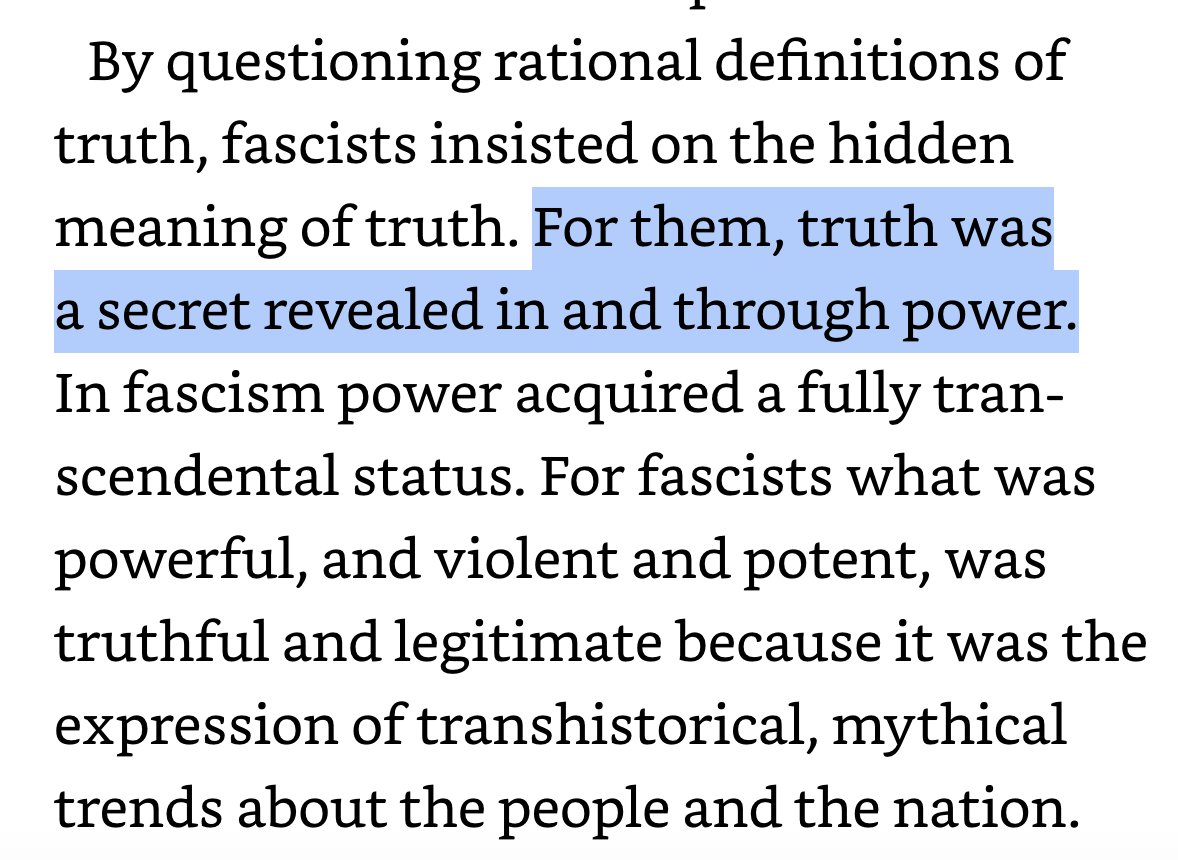 Goebbels doesn’t actually think he’s lying. He thinks he presenting this higher truth in a way that can be grasped by the masses.

14/ Next questions: How do we get the liars to stop lying?
How do we show them that what they are saying isn’t true?

It seems to me that if they actually believe these lies because they think the lies speak to some kind of “inner” truth, logic and facts won't work.
15/ All we can do is mobilize and outvote those who tell (and believe) these lies.

Similarly, if some of them are cynically telling big lies for political gain, no amount of argument or persuasion will stop them.

They’ll only stop when it’s politically expedient to do so.
16/ So what is their end goal as they double down? ( @HC_Richardson)

The consolation is they're a minority.
More people want democracy.
17/ When we accept as true that they are fanatics who will not give up their quest to create the world they believe does (or should) exist, we can stop despairing and mobilize to do the work to outvote and outnumber them.

What struck me this week was the stunning magnitude and sheer audacity of some of the lies coming from Republican Leaders. I’ll give a few examples.  Rep. Marjorie Taylor Green tweeted this after the...

https://terikanefield.com/fascist-lies/
Sorry about the video error. I flunk "how to upload the right video."

Will redo when I figure out how.
Here's the correct video. This thread is getting long, but I'd like to add a few of the comments to the thread.
h/t to @heidirielly: Exhibit A

Kamala Harris answered this question during the election

They put up a barrier, we figure out a way around it. View it as a challenge.

Democracy isn't easy. It takes a lot of work and constant civic engagement by those who want it to work.

The idea that democracy will never have enemies is fantasy.

Fact: Democracy will always have enemies.
https://twitter.com/jstrange1925/status/1386380419113779204
Good point. The exclusiveness of their position guarantees that they will remain a minority and their numbers will shrink-- never as much as we'd like, but demographics are working against them.

They do say it applies only to certain people. Some even say "not everyone SHOULD vote."

Sarah Palin talked about "real" Americans (small town or rural, and white). They believe deep down that America should belong to "real" Americans. https://twitter.com/GreenGenii/status/1386383416518758402

Lesson from Finchelstein: It's not just that they're being lied to. They embrace the lies because the lies conform to the world as they think it is, and perversely, the lies create the world they envision. https://twitter.com/atrupar/status/1386339603750301698

I know this thread is long (apologies) but so much is connected.

When Ingraham said that Biden's "insurrectionists" are trying to make us forget what made America great, she meant this

myth that the whites made America great.