1/ Why does Avalanche $AVAX stand above the rest?

To conclude this mini-series, let's look at Tokenomics and how Avalanche $AVAX compares to other platforms.

2/ Unlike most other staking platforms which have an unlimited supply and continuously increase their supply at a compounded rate through high inflation, leading to dilution of existing token holders, Avalanche $AVAX has a fixed capped supply of 720 million, creating scarcity.
3/ 360 million tokens were minted at launch (with vesting periods between 1 and 10 years) whilst the other 360 mil are used for rewards for staking released over decades.

As with Bitcoin, reward rates will decrease over time as it gets closer to the capped supply 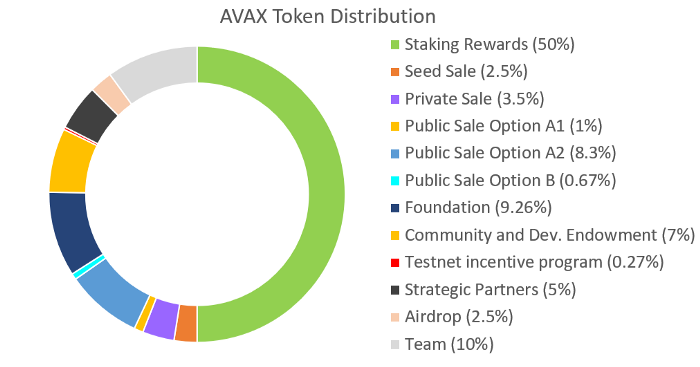 4/ A completely meaningless comparison I see some people making is comparing the fully diluted cap of a fixed-cap asset such as AVAX to the diluted cap of a variable-cap asset. This makes no sense. You're comparing the fully diluted cap that will take 50+ years to reach, to the..
5/ current total supply of a variable-cap asset which has unlimited supply and yearly compounded inflation rate, and that’s before you take into consideration the AVAX tokens which get burned.
6/ As an example, Polkadot is a non-fixed cap has a current total supply of 1 Billion and a 10% yearly inflation. After 50 years the total supply would have increased from 1 Billion to 117.3 Billion. Then let's see how the favourably they compare.
7/ Based off current prices for AVAX and DOT:

Avalanche Market Cap (worst possible scenario where every token is in circulation and completely ignoring the burned AVAX) is $15.5 Billion

Polkadot Market Cap would be $3.4 Trillion! (and supply would continue increasing each year)
8/ ATOM is a commonly misunderstood token where people think it's used for all of Cosmos. That's not the case, it is only used for the Cosmos Hub, one of many hubs each with their own token. Cosmos can be a success without the use of the Cosmos hub at all. https://cryptoseq.medium.com/cosmos-atom-token-and-the-commonly-misunderstood-staking-tokens-part-three-958c295c5b78
Cosmos ATOM Token and the commonly misunderstood staking tokens — Part Three

This is part three where we look at the ATOM token and general misconceptions around staking tokens. Part one can be found here and part…

https://cryptoseq.medium.com/cosmos-atom-token-and-the-commonly-misunderstood-staking-tokens-part-three-958c295c5b78
9/ Even with the additional functionality they are hoping to add to it in the future such as a DEX, the Hub is limited in tps and so can never have all traffic flowing through it as it would be a bottleneck. Of those transactions that do, you don't even need to use ATOM for fees
10/ Meanwhile the token supply continues to increase each year with inflation, diluting existing holders. Also like with other platforms transaction fees go to the small group of validators who then just sell them shortly after to cover their costs., not creating a lot of value.
11/In addition to having a limited supply like with Bitcoin, Avalanche goes further by burning AVAX tokens for fees for all sorts of operations on the network in the primary network such as transaction fees, subscription style fees for creating subnets and creation of blockchains

12/ thus increasing the scarcity of AVAX for all token holders, (rather than fees just going to a small group of validators) and creating deflationary pressure when the amount burnt exceeds the minting rewards. Potential for an excellent store of value as well as a payment system
13/Whereas Ethereum’s EIP 1559 proposal just burns part of the fee, Avalanche burns the entire fee. Avalanche's fixed capped supply means there can never be more than 720 million AVAX, whereas there are no limits with the size of Ethereum’s supply.
14/ An Ethereum Genesis holder who bought $ETH at $0.3111 had hands of steel whilst the price soared to highs of $1433, a 4606x on their investment. Everyone has their limits though and sold a 1/3 of their ETH to participate in the $AVAX ICO (max allowed) https://etherscan.io/address/0xd9b783d31d32adc50fa3eacaa15d92b568eaeb47
Address 0xd9b783d31d32adc50fa3eacaa15d92b568eaeb47 | Etherscan

The Address 0xd9b783d31d32adc50fa3eacaa15d92b568eaeb47 page allows users to view transactions, balances, token holdings and transfers of both ERC-20 and ERC-721 (NFT) tokens, and analytics.

https://etherscan.io/address/0xd9b783d31d32adc50fa3eacaa15d92b568eaeb47
15/ Enterprise deployments such as permissioned forks of Ethereum or Enterprises building on permissioned side-chains on Algorand, don't use the ETH or ALGO token and provide no utility. AVAX is one of very few projects where enterprise use provides utility for the token.
16/ All validators of any subnet have to validate the primary network and stake a minimum of 2000 AVAX. In addition, subnet and blockchain creation fees are paid in AVAX which are burned. Unlike the Cosmos Hub, the primary network and $AVAX is essential for the network.
17/Staking AVAX is incredibly lucrative, offering rates between 9.32% and 11.1%, especially when the price of $AVAX is likely to rise over time due to the above, making it an excellent long-term investment and no risk of slashing and losing your funds like other staking protocols
18/ Not only that, but you can receive rewards in other tokens validating various subnets in addition to the primary network. There are also plans to enable liquid staking where you will be able to use the staked AVAX for DeFi activities for the potential for even greater rewards
19/Avalanche has the scarcity properties of Bitcoin, the potential for utility to far exceed Ethereum with thousands of subnets building on top, creating incredible network effects. In addition to a capped supply, it has EIP 1559 on steriods where all the tranaction fee is burned
20/ not just for transaction fees on one chain but all the chains in the primary network as well as blockchain and subnet creation fees for other subnets, creating deflationary pressures.
21/ Avalanche makes an excellent payment platform, supporting a variety of assets with its revolutionary consensus engine, exceeding Visa-Level throughput with sub second finality whilst able to accommodate millions of validators.
22/ Rewards will reduce over time like with Bitcoin halving events, combined with the transaction fees being burned could lead to incredible price appreciation. It's like mining Bitcoin in the early days and is going to get even more lucrative with subnets and liquidity staking.
23/ $AVAX has incredible tokenomics, capturing value from all that build on top. There has been rapid growth of the platform just 6 months since mainnet and this is going to continue to exponentially increase from here. https://medium.com/avalanche-hub/why-avalanche-avax-has-the-potential-to-be-an-incredible-store-of-value-8ef6e68cbb60
Why Avalanche (AVAX) has the potential to be an incredible store of value

Blockchain is going to completely revolutionize most industries and even the Internet itself. We are presented with an incredible…

https://medium.com/avalanche-hub/why-avalanche-avax-has-the-potential-to-be-an-incredible-store-of-value-8ef6e68cbb60
24/ Avalanche is creating the Internet of Finance, offering the best place to build DeFi applications but also the traditional finance market, where the derivatives market alone is worth a staggering $800 trillion and able to meet regulatory compliance and Enterprise adoption
25/ There's so much to look forward to in the coming weeks and months with projects going live, new features being rolled out, listing on major exchanges, NFT marketplaces, new bridges, lending platforms and much more. This is just the very beginning.

https://cryptoseq.medium.com/why-im-so-bullish-on-avalanche-avax-67ed4d91d100
Why I’m so Bullish on Avalanche AVAX.

Avalanche is a platform of platforms, ultimately consisting of thousands of subnets to form a heterogeneous interoperable network

https://cryptoseq.medium.com/why-im-so-bullish-on-avalanche-avax-67ed4d91d100
You can follow @CryptoSeq.
Tip: mention @twtextapp on a Twitter thread with the keyword “unroll” to get a link to it.