Read on Twitter
ok BOYS AND GIRLS had my second session this week (yea, i went back for seconds) and it was GOOD. We talked about TRUTH and LYING and it's way more complicated than you might first think. Straddle on, this one's a banger: https://twitter.com/nosilverv/status/1377897881642893318

I knew I wanted to talk about truth but I didn't have a precise thing that was eating at me. In the previous thread I did. I was desperately confused. This time I was merely confused. I wanted to test if my feeling bad was necessary to making philosophical progress.
Turns out: it's not. Thank the lord.
So, I just had various ideas or thoughts about truth and truth-telling and some feelings and stories and didn't know how to put them together. E.g.:
Peterson talks about telling the truth being GOOD. I just think he is RIGHT in some sort of weird CONSCIENCE kind of way. Like even in a world where there's no one else saying truth out loud would feel GOOD.
In addition to that, and sorta separate, lying feels BAD. Lying to others feels really ICK
In addition addition to that I had a vivid memory of a dinner where someone asked me, publicly, my opinion on the topic du jour at the time: Basque nationalist ambitions. I was flabbergasted and (very rudely) answered 'You can't possibly expect me to have opinions on that'.
So, that's kinda where we started. Pretty early on Lisa threw the concept of deception at me - having the *intention* to deceive. Once I got that I noticed I could make a distinction between
* Saying a statement that is true
* Having the intention to tell the truth
Basically my concept of "Lie" was equivocating two different things. So I renamed those things:

Lie_1 - Active intention to deceive (about intention)
Lie_2 - Not saying precisely true thing (about output)
Notably, once you make that distinction you can have four different combinations by combining each and their negation
So you can have:

Lie_1 + Lie_2 = You intend to deceive and don't say a precisely true thing -- Deception
~(Lie_1) & Lie_2 = You intended to say a knowingly false thing to create a more correct mental image and succeeded
(Apparently philosophers call this a "truthful lie" and i was literally laughing out loud at that bc if that isn't the most stereotypical term philosophers would come up with I don't know what is)
"Truthful lies" are lies to children/Wittgenstein ladder's. It's like, to accurately describe Quantum Mechanics you'd have to just speak math that most can't grasp in the least. So you simplify it, you give them a ladder to the truth that isn't the truth but helps getting there.
I called them "pedagogical lies" in my idiolect. The reader is welcome to relate this to upaya, two-truth systems, exoteric and esoteric doctrines etc.)
Continuing:

Lie_1 & ~(Lie_2) = You say a precisely true thing with the intention to deceive. Called this a "lying truth". Lies of omission fall into this. ("Who were you with?" "Jane" [true, but Jack was also there])
~(Lie_1) & ~(Lie_2) = Truth-telling
So, we got to this by distinguishing the truth-value of what is said from the intention behind what is said.
You further separate intention into what you want to happen in the other person's mind and how you go about it, and output into truth-value of what is said and output of the interaction. This gives you epic 24 combinations + 3 special cases. 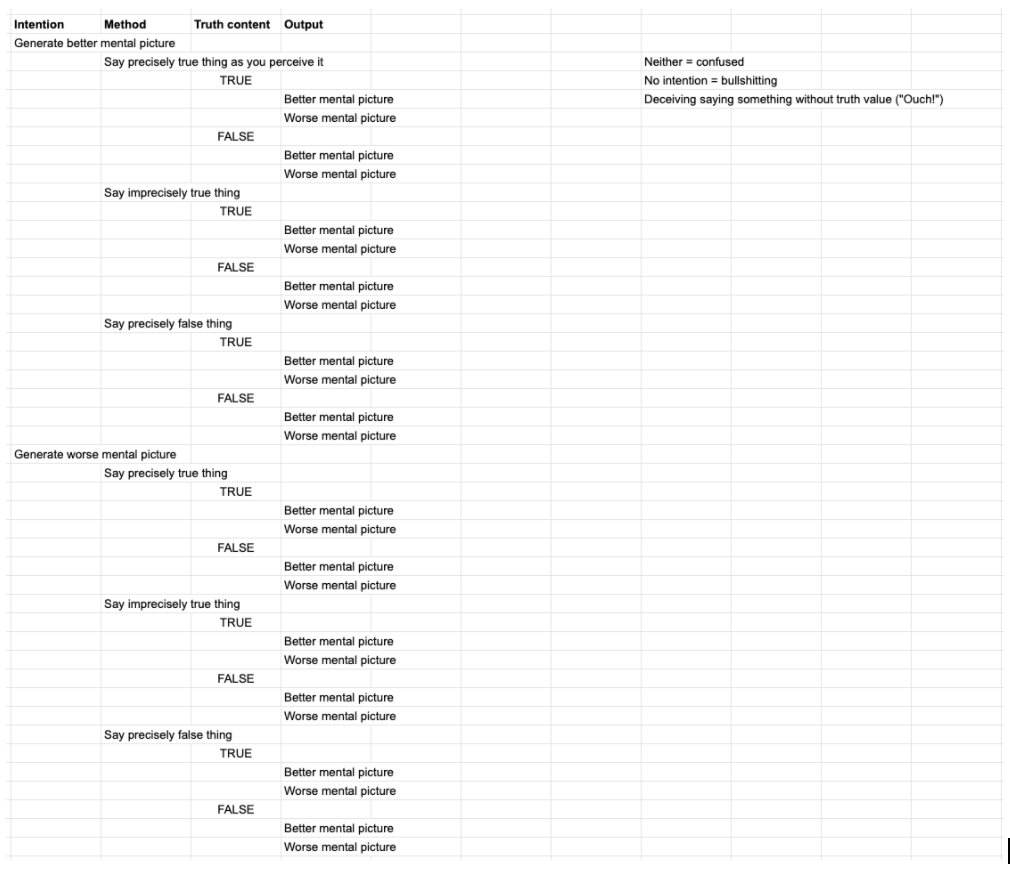 (One of these special cases (Bullshit) has had a 67 page highly influential book written about it, so there could be much more said, probably.)
We're getting to world-class autism level on the conceptual clarity here but I just mean to show, rather, to EXPLODE concepts of truth and lying that I had before. They feel very solid, like black boxes almost, like someone can say 'was it true or a lie?' and there's one answer
But actually "it's complicated" is a reasonable response. And not in a "i'm trying to hide the truth from you" way but "those concepts are not sufficiently clear to capture what actually happened". Recall my recent thread "truth", "lie" are map https://twitter.com/nosilverv/status/1384410954021081091

Ok, let's relax the autism and see where we landed

Just this distinction between “telling the truth” and “lying" (those terms now feel awfully imprecise as I type them) made sense of a bunch of things that felt unrelated before:
Success or not in imparting a better or worse mental image, truthful lies (pedagogical lies), lying truths (a truth said to create a less accurate mental picture), deception (intention to create less accurate mental picture),
imprecision (intending to say precise truth and failing), mistakes (saying believed truth that happens to be false or believed falsity that happens to be true), bullshit (intending to say something independent of its truth-value: using language instrumentally),
lies of omission (saying part of the truth and deliberately not saying another part with the intention to create a worse mental picture), confusion (believing one is saying something with truth-value when one isn’t, “not-even-wrong”),
honest mistakes (intending to say something true and failing), confusing with the truth (throwing QM math at a toddler), successfully conveying precise truth (absolute truth-telling), ...
At this point we brought it back to the original example. The problem was that, when I was asked about my opinion on Basque nationalism what I was ostensibly being asked about (Basque nationalism ambitions) and what was actually happening were not in accordance.
This person wanted to give me a spotlight but this felt bad because it was given by pretending that we were really talking about something else when it was just an opportunity for me to 'shine forth my intellectual brilliance and dazzle everyone at the table'
Lisa brought up how Kant thought that was is good is what is scalable (can’t believe no one ever made this joke before lol) and lying isn’t scalable bc it preys on truth: in a world of liars you couldn’t lie bc no one would believe anything to start with.
And so the whole thing did feel bad because the question wasn't about what the question was about and being invited to participate in that deception felt bad.
Here Lisa countered with the fact that there's something else that's not about content that presumably feels fine: the ritual of saying "How do you do? Fine". No content is exchanged and in fact actually earnestly answering the question would be weird.
The question and answer is just for you to show you're not a psycho and that you can minimally follow society's rules. That you're safe.
And in that case it felt *good* and fine.
So, at this point, a further distinction came to mind. Whether there is private knowledge, mutual, or common knowledge about what is being spoken not being about what is ostensibly being spoken about.

Private knowledge is when only you know and it's creepy. If you're asking a girl about her relationship not bc you care about the relationship but bc you want to get in her pants, that's deceitful and creepy. Mutual knowledge is when each has private knowledge of something.
Common knowledge if when everyone knows that everyone knows that everyone knows something. "How are you?" "Fine." falls into that.
I felt really distressed bc it just seemed extremely horrid that everyone knew that the question was not about what it was about but each person thought everyone else didn't know which is why it survived.
If everyone knew that everyone knew - if someone got up and called out the question was asked just to give me an opportunity to shine - then it would have completely fell apart and failed.
I was fairly miserable and distressed at this point lol and that was when Lisa mentioned "safety".
At this point a lightbulb went up and i remembered a portuguese saying: “Não se discute política e religião à mesa” → I.e. don’t talk about things you actually care about/ can’t/aren’t willing to bullshit about
And I realised that that was actually really wise: the current detente that makes the social event possible in the first place *depends on our not knowing each other’s true beliefs*
If we actually knew what each other believes we would split ways immediately/murder-suicide. Precisely by *not* knowing them we might build enough trust to one day come to reveal them. It’s a pedagogical lie.
Said another way, yes there is mutual, not common knowledge of this deception, but it isn't a deception: it's a pedagogical lie that bootstraps us qua group into a position where we might feel safe enough to eventually share straight up truths with one another.
And so it actually *makes sense* and *is reasonable* (am i the king of chesterton's fence or what?)
At this point I went meta and wanted to realise why this had tripped me in the first place. Here's a speculation:
Normies - don’t feel socially safe (read signal and ostensible absence of signal as signal )
Auties/Rationalists/Quookas (from @0x49fa98) - are unaware of social threat (bc poor other mind-modelling) (read signal as signal) (bc oblivious/poorly calibrated)
It's hard to see what's happening using only signal. If you feel safe and can only read signal and not the absence of signal you won't realise - unless you engage in the insanity i did lol - others don't because saying one is unsafe is itself unsafe, thus that info isn’t shared.
In summary: people (correctly?) believe they aren’t socially safe to do direct truth-telling (as defined above) so they mutually do pedagogical lies (Like, nothing said during dinner banter is taken to be truly about the content it ostensibly is about)
(Like it would be a faux pas to take it to be so even.) so that one day we can reach actual truth-telling (closer alignment). Not there yet bc starting from way too far off beliefs for that to be safe.
It’s the same same dynamic as saying ‘I’m doing fine thanks’ to signal you’re not a psycho, just at scale: you engage in lively banter to signal safety so that eventual closer alignment and belief-disclosing is possible.
I think @slatestarcodex made a distinction between Diplomats & Engineers. Basically, diplomats only speak with engineer plainness once close alignment established - you don’t want to speak with plainness to a potential russian spy in your project manhattan.
Tl; dr:

Statement was an ask for me to participate in deceiving others

That felt bad
It feels like, by default, there's a lot of deceiving others. Not true. What there are are considerations of safety that make it so that people don’t initially speak the whole truth as they see because that is the only path for them to eventually safely do so.
Basically, most people are doing:

People who, correctly or not, assume alignment to have been solved for, find the two first steps most frustrating.
(Addendum: this didn't come in the session but I wonder whether what's going on is that when normies talk about nearly anything it *is* about teasing alignment by default so you can't say your true beliefs and when auties do it it is about the topic and so not about alignments)
You can follow @nosilverv.
Tip: mention @twtextapp on a Twitter thread with the keyword “unroll” to get a link to it.