Read on Twitter
1. Unrelenting abuse since yesterday. Because journalist @atti_cus deliberately misconstrued my tweet that countered his outrage at the fake news that India was exporting Medical Oxygen.

But Instead of apologising he now gets politicians to amplify his lie. These guys are vile. 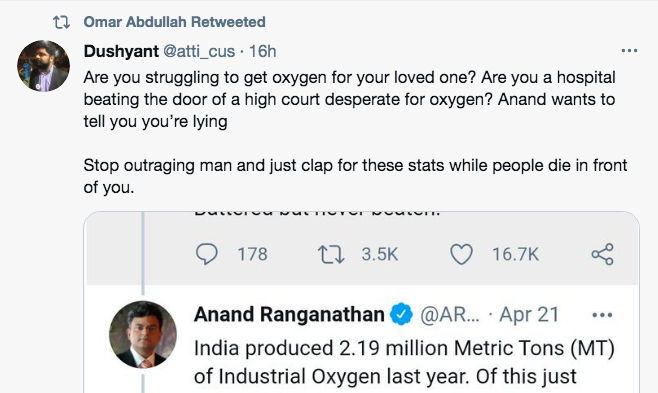 2. Subsequent to my pointing out that India was exporting not Medical but Industrial Oxygen, and that too just 9200 tons or 0.4% of its 2.19 million tons yearly output, one news portal - the genesis of the fake outrage - withdrew its report & apologised. But @atti_cus never did. 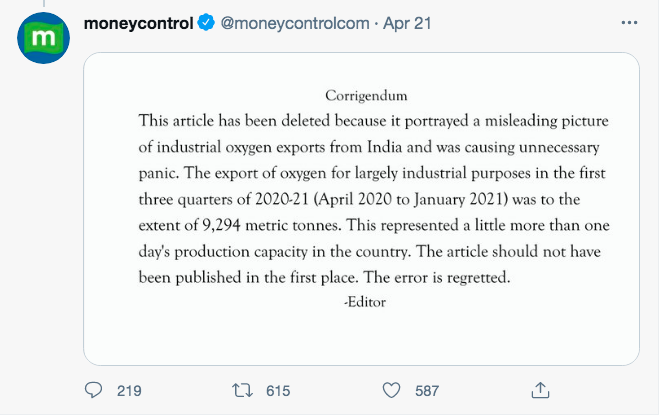 3. @atti_cus triggered thousands to abuse me, to hide his own culpability in spreading fake news of Medical Oxygen export.

I know he will never apologise, and neither will @OmarAbdullah and @Shehla_Rashid, but for those who still go by facts, truth, and objectivity know better.
4. My tweet was clearly meant to expose the outrage by propagandists who claimed India was exporting Medical Oxygen, and not to prevent those outraging at Centre and State mismanagement concerning Oxygen supply. Even I am outraged. Here are my views:
5. It is vile that at a time of national emergency when all Indians are uniting and helping each other, especially to counter scare-mongering & fake news, some journalists & politicians are resorting to slander and abuse. Their frustration is obvious. They'll never succeed.

~End
Dear @sushant_says. Today you amplified a troll's hateful tweet against me. Fine.

But I want you to recall the time you wanted drug regimen for your sister suffering from CIDP and I spent a day digging out antibody treatments to pass on.

You can follow @ARanganathan72.
Tip: mention @twtextapp on a Twitter thread with the keyword “unroll” to get a link to it.