Read on Twitter
Usually, the 'assume the only integration tool for renewables is a battery' gambit is used by opponents of renewables.

Here, it's used by pro-Bitcoin folks to try and carve out a grid function of massive, always-on demand sinks generating profits rather than social benefit. https://twitter.com/yassineARK/status/1384912169884602378

The trick lies in this specific assumption: the only two options available in their model are "Burn through power to make profit" or "store it inside a lithium ion battery". 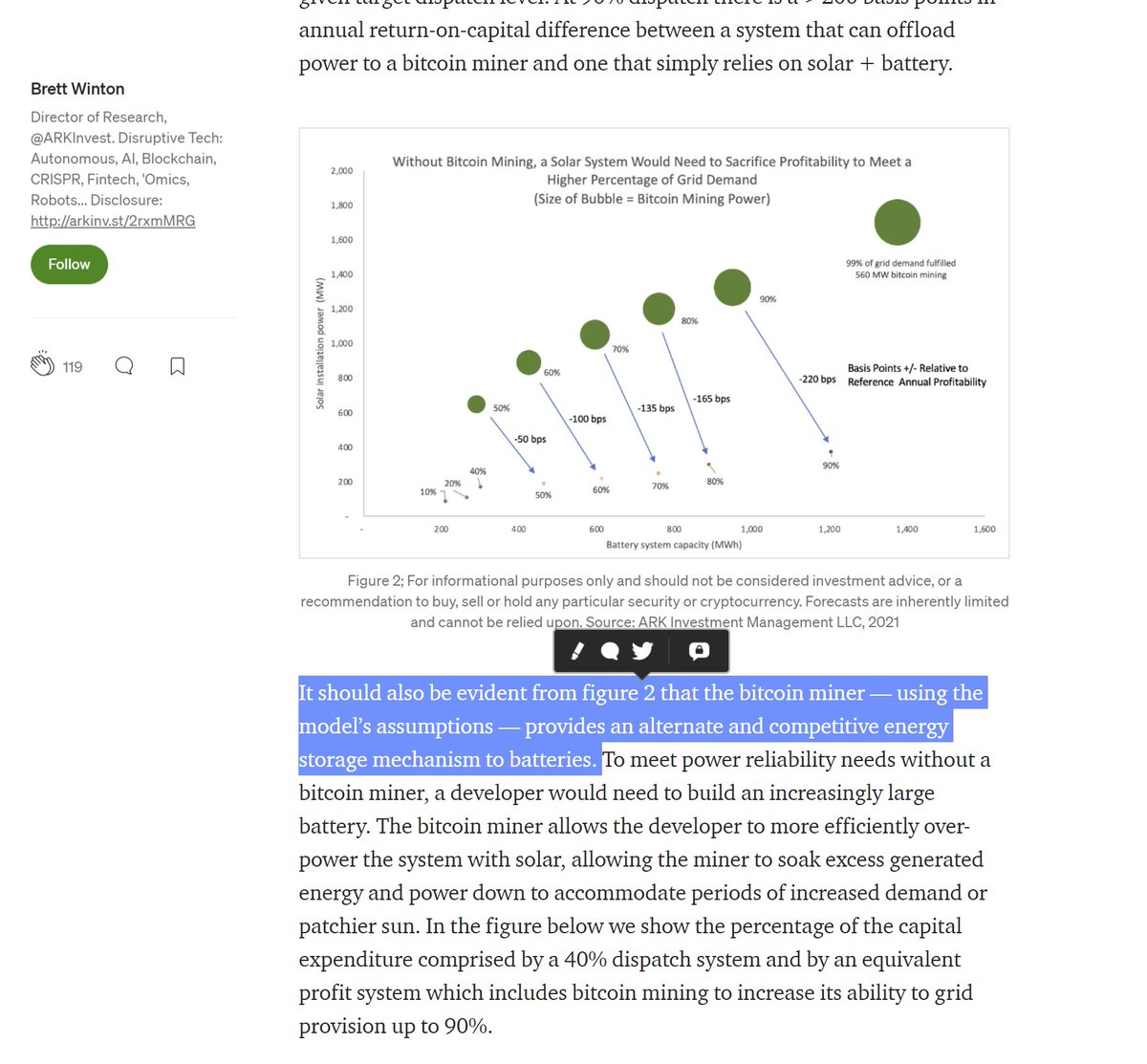 The economics of grid integration for both solar and wind are solved problems. They *stay cheap* even when you pay for the tools needed to integrate very high quantities of wind and solar in grids.

There doesn't seem to be anything special about Bitcoin here. Why not use surplus renewables to power steel manufacturing and earn cash? Or power an always-on data centre?

For the fourth consecutive year, Google has matched 100% of its global electricity use with renewable energy—but that’s just the beginning.

https://cloud.google.com/blog/topics/sustainability/google-achieves-four-consecutive-years-of-100-percent-renewable-energy?utm_source=twitter&amp;utm_medium=unpaidsoc&amp;utm_campaign=FY21-Q2-Google-Cloud-Blog&amp;utm_content=earthday
Anyway, good on them for sharing the model. Around half the total solar power goes to making brettcoins and the other half goes to serving electricity demand

But in a real-world power system, fossil fuels would be present: fossil fuels that should be displaced by the solar power 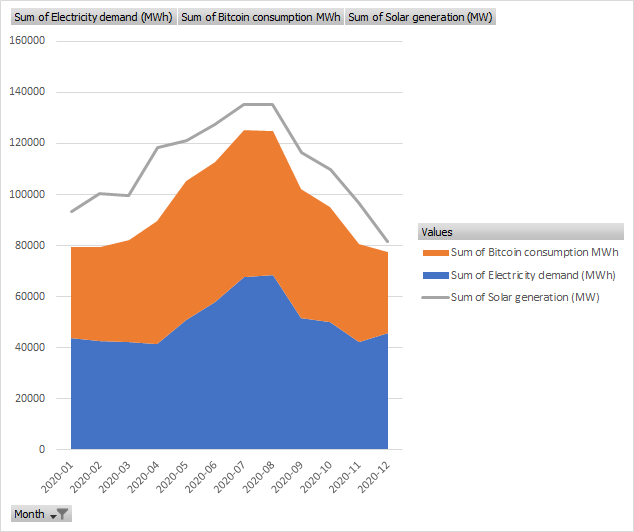 This is a constant theme I've been seeing: "The FUD has been debunked! Bitcoin ISN'T boiling the oceans!" - but the refutation is a *theoretical* future potential, not a real-world measurement. https://twitter.com/yassineARK/status/1384912169884602378

Why isn't there a real-world example of a Bitcoin mining facility verifiably flexing their demand relative to the output of wind and solar? The technology is ten lines of code. 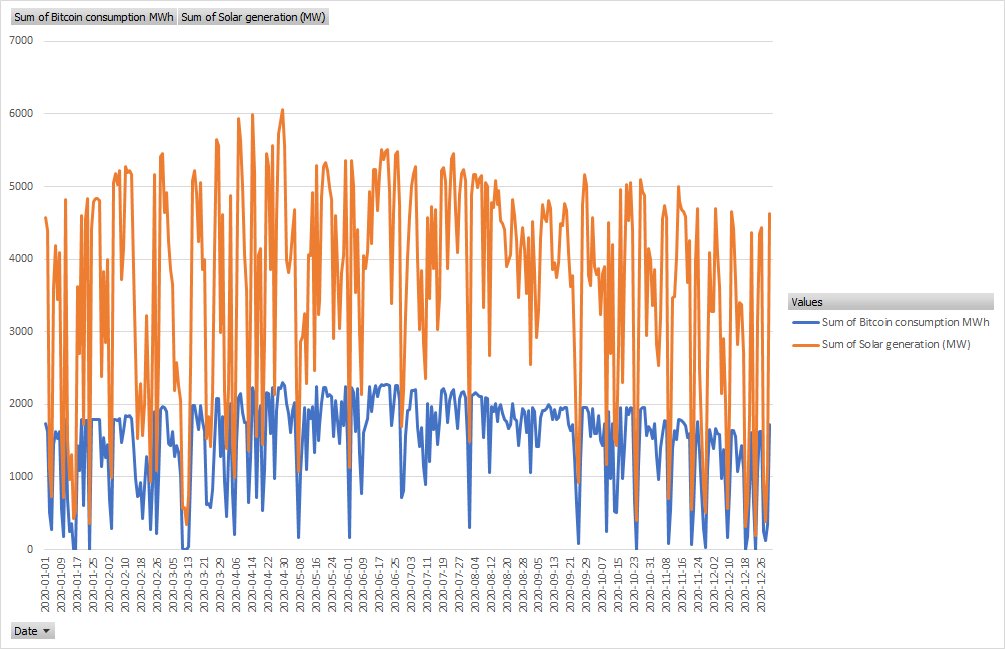 If this was a humble thought experiment it'd be interesting.

But other core commonality here is this incredible tendency for massively over-excitement and totally unjustified confidence. "Turned the tables"? Come on....... https://twitter.com/milessuter/status/1384901081390538753

tl;dr: if you assume that nothing exists except bitcoin, solar and batteries, you can earn cash by burning through power to manufacture money.

IRL: electricity systems are undergoing a transition from dangerous to safe, and any diversion from that = more danger
Anyway. https://twitter.com/energywebx/status/1384577393449324549

One more bit - this is other critical failure point for the analysis.

Renewables are not held back because the generation profile doesn't match demand. They're held back by the incumbency of fossil fuels, and gov failures to orchestrate rapid transition https://twitter.com/sqcrypto/status/1384901046347108353

Bitcoin does not incentivise renewable energy. 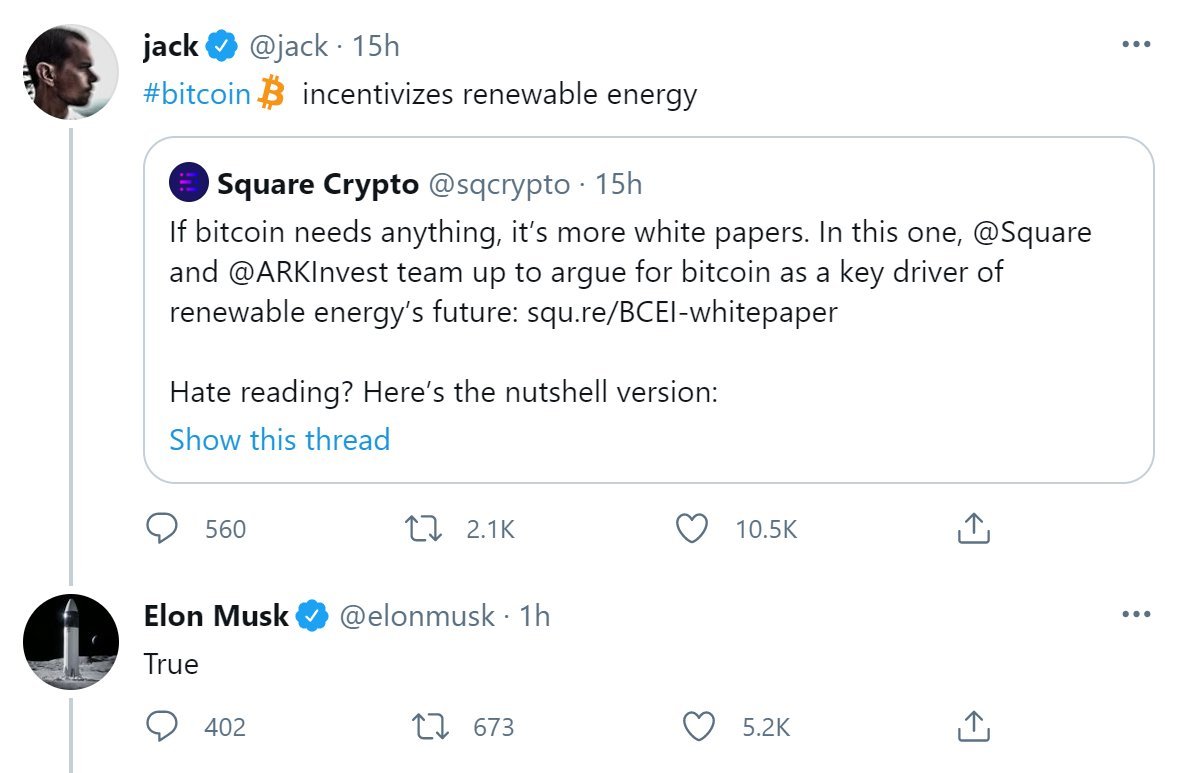 Of all the greenwashing that's coming out of the firehose this week I think this is the one that's going to drive me the most up the wall
"We’ve heard arguments that PoW energy demands will catalyze the renewable industry, turbocharging capital investment, innovation and supply. This argument is also spurious" https://medium.com/@chrislarsensf/the-cryptocurrency-industry-needs-to-reconsider-proof-of-work-43f91d045920
The Cryptocurrency Industry Needs to Reconsider Proof-of-Work

https://medium.com/@chrislarsensf/the-cryptocurrency-industry-needs-to-reconsider-proof-of-work-43f91d045920
"The idea that PoW crypto could enable a never-ending use case for hydrocarbons is a nightmare scenario. Fossil fuels need to stay in the ground, not be burned for crypto rewards" https://medium.com/@chrislarsensf/the-cryptocurrency-industry-needs-to-reconsider-proof-of-work-43f91d045920
The Cryptocurrency Industry Needs to Reconsider Proof-of-Work

https://medium.com/@chrislarsensf/the-cryptocurrency-industry-needs-to-reconsider-proof-of-work-43f91d045920
You can follow @KetanJ0.
Tip: mention @twtextapp on a Twitter thread with the keyword “unroll” to get a link to it.