"This should be the main thing everyone talks about. There is literally no more urgent matter on earth than the looming possibility that everyone might die in a nuclear war." https://caitlinjohnstone.substack.com/p/the-rising-threat-of-nuclear-war
The Rising Threat Of Nuclear War Is The Most Urgent Matter In The World

US Strategic Command, the branch of the US military responsible for America's nuclear arsenal, tweeted the following on Tuesday: "The spectrum of conflict today is neither linear nor predictable. We...

https://caitlinjohnstone.substack.com/p/the-rising-threat-of-nuclear-war
Check out this recent tweet by US Strategic Command, the branch of the US military responsible for America's nuclear arsenal: https://twitter.com/US_Stratcom/status/1384343498825027584?s=20

This caused a lot of alarm, not because of any inaccuracy in STRATCOM's frank statement, but due to the bizarre fact that our world's increasing risk of nuclear war barely features in mainstream discourse. https://www.newsweek.com/us-strategic-command-tweet-nuclear-war-1584909
The U.S. Strategic Command just casually tweeted about nuclear war

The strange statement elicited a slew of panicked responses from those on Twitter who were quick to ask for clarification.

https://www.newsweek.com/us-strategic-command-tweet-nuclear-war-1584909
STRATCOM has been preparing not just to use its nuclear arsenal for deterrence but also to "win" a nuclear war should one arise from the (entirely US-created) "conditions" which are "neither linear nor predictable". https://original.antiwar.com/danny_sjursen/2020/10/29/americas-still-strangelovian-schemes-to-win-nuclear-wars/
America’s Still Strangelovian Schemes to ‘Win’ Nuclear Wars

"Global Thunder: Bombers practice for nuclear war." – Air Force Times, five days ago. The headline itself, its casual yet confident language – and that it barely raises a collective eyebrow –...

https://original.antiwar.com/danny_sjursen/2020/10/29/americas-still-strangelovian-schemes-to-win-nuclear-wars/
And nuclear war is looking increasingly likely as the prevailing orthodoxy among western imperialists that US unipolar hegemony must be preserved at all cost rushes headlong toward America's plunge into post-primacy. https://news.antiwar.com/2021/02/03/us-admiral-warns-nuclear-war-with-russia-china-is-a-real-possibility/
US Admiral Warns Nuclear War With Russia, China Is a ‘Real Possibility’

https://news.antiwar.com/2021/02/03/us-admiral-warns-nuclear-war-with-russia-china-is-a-real-possibility/
The US has been ramping up aggressions with Russia in a way that has terrified experts, https://caitlinjohnstone.com/2020/09/19/stephen-cohen-has-died-remember-his-urgent-warnings-against-the-new-cold-war/
Stephen Cohen Has Died. Remember His Urgent Warnings Against The New Cold War.

Stephen F Cohen, the renowned American scholar on Russia and leading authority on US-Russian relations, has died of lung cancer at the age of 81. As one of the precious few western voices of sanity…

These aggressions are further complicated on increasingly tense fronts like Ukraine, which is threatening to obtain nuclear weapons if it isn't granted membership to NATO, either of which would increase the risk of conflict. https://au.news.yahoo.com/ukraine-ponders-nuclear-arms-102813639.html
Ukraine ponders nuclear arms

Ukraine is considering arming itself with nuclear weapons should the eastern European country not become a member of NATO, its ambassador to Germany says."Either we are part of an alliance like NATO...

https://au.news.yahoo.com/ukraine-ponders-nuclear-arms-102813639.html
Aggressions against nuclear-armed China are escalating on what seems like a daily basis at this point, with potential flashpoints in the China Seas, Taiwan, Xinjiang, Hong Kong, India, and any number of other possible fronts.
https://duckduckgo.com/?q=site%3Aantiwar.com+china&t=hy&va=z&df=y&ia=web

The fact that those in charge of US nuclear weapons now see both Russia and China as a major nuclear threat, and the fact that US cold warriors are escalating against both of them, is horrifying.

The Bulletin of the Atomic Scientists has the 2021 Doomsday Clock at 100 seconds to midnight, citing the rising threat of nuclear war:
https://thebulletin.org/doomsday-clock/current-time/

In a new interview with @v_zilber,
@QuincyInst nuclear policy specialist @Cirincione described a ramp-up in weapons technology among all nuclear-armed nations in the world, the future of which he described as "bleak":
https://twitter.com/Phoenix_Coop/status/1384591995016974338?s=20 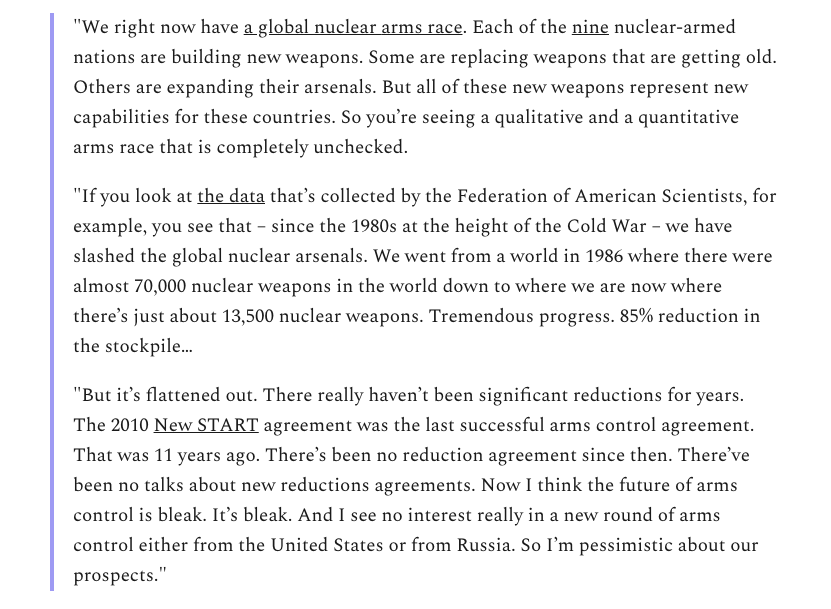 The main risk isn't that anyone will CHOOSE nuclear war, it’s that it will be inadvertently sparked amid heightening tensions as a result of miscommunication, miscalculation, misfire, or malfunction, as nearly happened many times during the last cold war. https://en.wikipedia.org/wiki/List_of_nuclear_close_calls
List of nuclear close calls - Wikipedia https://en.wikipedia.org/wiki/List_of_nuclear_close_calls
The more tense things get, the likelier such an event becomes. This new cold war is happening along two fronts, with a bunch of proxy conflicts complicating things even further. There are so very many small moving parts, and it’s impossible to remain in control of all of them.
People like to think every nuclear-armed country has one “The Button” with which they can consciously choose to start a nuclear war after careful deliberation, but it doesn’t work that way: https://fpif.org/thousands-people-launch-nuclear-war/
There Are Thousands of People Who Could Launch a Nuclear War

It's scary to think of Donald Trump or Kim Jung-un with a nuclear button. Scarier are all the nameless functionaries with the same.

https://fpif.org/thousands-people-launch-nuclear-war/
There are THOUSANDS of people in the world controlling different parts of different nuclear arsenals who could independently initiate a nuclear war. THOUSANDS of “The Buttons”. It only takes one. The arrogance of believing anyone can control such a conflict safely is astounding.
A 2014 report found that it would only take the detonation of 100 nuclear warheads to throw 5 teragrams of black soot into the earth’s stratosphere for decades, blocking out the sun and making the photosynthesis of plants impossible, starving everything. https://agupubs.onlinelibrary.wiley.com/doi/full/10.1002/2013EF000205
Multidecadal global cooling and unprecedented ozone loss following a regional nuclear conflict

https://agupubs.onlinelibrary.wiley.com/doi/full/10.1002/2013EF000205
This should be the main thing everyone talks about. There is literally no more urgent matter on earth than the looming possibility that everyone might die in a nuclear war.

Seriously, take a look. You'll see a deluge of commenters accusing her of "hyperbole", saying she's being soft on Putin, and admonishing her for appearing on Tucker Carlson.

It's like they can't even hear what she's saying. How real it is. How significant it is.
People's failure to wrap their minds around this issue is a testament to the power of normalcy bias, a cognitive glitch which causes us to assume that because something bad hasn't happened in the past, it won't happen in the future.
https://info.obsglobal.com/blog/the-normalcy-bias

We survived the last cold war by the skin of our teeth, entirely by sheer, dumb luck; the only reason people are around to bleat "hyperbole" is because we got lucky. There's no reason to believe we'll get lucky again in this new cold war environment.
But mostly people's inability to look squarely at this issue is a testament to the ubiquitous malpractice of the western media.

This is so much bigger than any of the petty little things we spend our mental energy on from day to day.

Because once the nukes start flying, none of that will matter. None of it. All that will matter is the fact that this is all ending. If you open the door and see a mushroom cloud growing on the horizon, all of your mental priorities will rearrange themselves real quick.
We should not be in this situation. There is no good reason governments should be playing these games with these weapons. There is no good reason we can't just get along with each other and collaborate toward a healthy world together.

The rising threat of nuclear war is the most urgent matter in the world, and it's absolute madness that we're not talking about it all the time.

Let's do what we can to change that.
You can follow @caitoz.
Tip: mention @twtextapp on a Twitter thread with the keyword “unroll” to get a link to it.