Read on Twitter
The housing twitter complaint is spot on. So many white, usually male, extremely online yimbys, state their opinions in issues they needn't be in with this absolute lack of social awareness and all it does is anger normal people and it reeks of entitlement. 1/ https://twitter.com/thelapod/status/1384270675964153871

This is not relegated to just yimbys this is with every extremely online group (the old Berniebro complaint) but its real issue. No matter how many times a white YIMBY is told to shut up about something, they have to give their crazed opinion which drives people, esp POC, away 2/
This is very annoying because the white yimbys who tweet too much and antagonize everyone are never the ones who will have to deal with in real life. Pro-housing didn't take off in Berkeley UNTIL white yimbys were told to stop insulting people and traditional outreach started 3/
Yimby's results vary by chapter but it will never be successful if it doesn't look like the local community and it doesn't tell people who make rude, stoic and dismissive comments on sensitive issues. You. Do. Not. Have. To. Give. Your. Opinion. On Every. Issue.
4/
Also another thing white yimbys need to stop doing is this "incumbent bitching" because all it says is you feel slighted that a policy might help a poorer person who arrived before you. I understand issues of mobility but you never say it right and its just entitlement.
5/
Example: especially if you're a wealthy tech worker, you're never going to make people feel sympathetic that rent control benefits some old lady over you and that the solution is eliminating it so your rents are slightly lower possibly. I'm sorry if that hurts your feelings
6/
Whenever people say stuff like this, it always comes off like you're in this for yourself. Like the author said, this isnt about yimby goals but instead the very loud, very angry and very embarrassing people who wrap themselves in it on twitter
/end
And frankly you all know who you are. You've been told multiple times to butt out that issue. To not post that insult to a random neighbor. To chill out. Some heed and some don't and its always the latter thats the loudest.
There is WAY too many people out there who say "I absolutely agree with YIMBYs but they're just crazy and rude." And it's whenever they give an opinion which is always an opportunity to converse, some arrogant yimby with an avocado or globe comes out swinging and ruins everything
I, obviously, don't have a problem insulting people on the internet but I don't do it to:
A) People who are normal, i.e. not ultra online partisans and assholes
B) Against people who arent attacking me

Everytime you swing it has consequences if you dont realize who you swing at
I'm not saying no one can comment without permission but try to have just the tiniest bit of empathy about a topic that may not make immediate economic sense. If the topic is about a community you're not from, consult someone first.
We won in Berkeley after several years of door knocking, campaigning, conversing and just basic outreach, creating a coalition of renters and homeowners, students and longtimers, scientists and activists.

We were losing way back when we just insulted people on the internet.
If you live in San Francisco or New York, don't jump into another community and start spouting off how you know the answers to their problems. Stop! 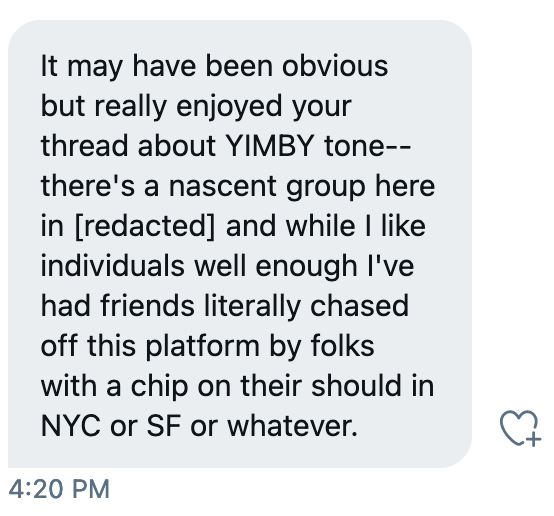 The key takeaway from the author IMO and I've felt the same is that if you're a Black urbanist, having to explain the actions of socially inept aggressive white people on social media is extremely tiring and makes you want out.
You can follow @IDoTheThinking.
Tip: mention @twtextapp on a Twitter thread with the keyword “unroll” to get a link to it.