Read on Twitter
To celebrate 4/20, here is a thread on Joe Biden and Kamala Harris' record on the War on Drugs, and what they can do now to repair the damage they've caused.

Biden once said, “Whenever people hear the words ‘drugs’ and ‘crime,’ I want them to think ‘Joe Biden.’” Here's why. 1/ 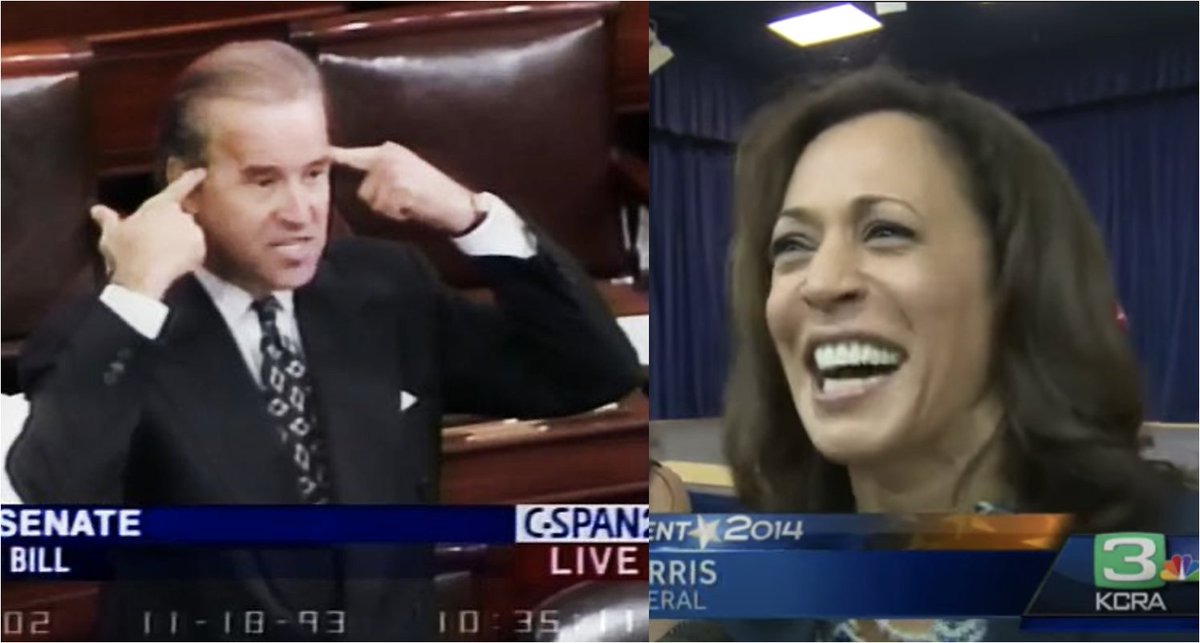 https://harpers.org/archive/2019/03/joe-biden-record/
Biden spearheaded the effort to brand the Democratic Party as "tough on crime" like drug use by enacting crueler sentencing.

Watch as he gloats about expanding the (racistly-applied) death penalty to cover 53 offenses, including convictions of drug dealing and homicide. 3/
Biden and Thurmond architected the expansion of civil asset forfeiture, which allows police to steal property from people who are merely suspected of drug crimes, even without being convicted. 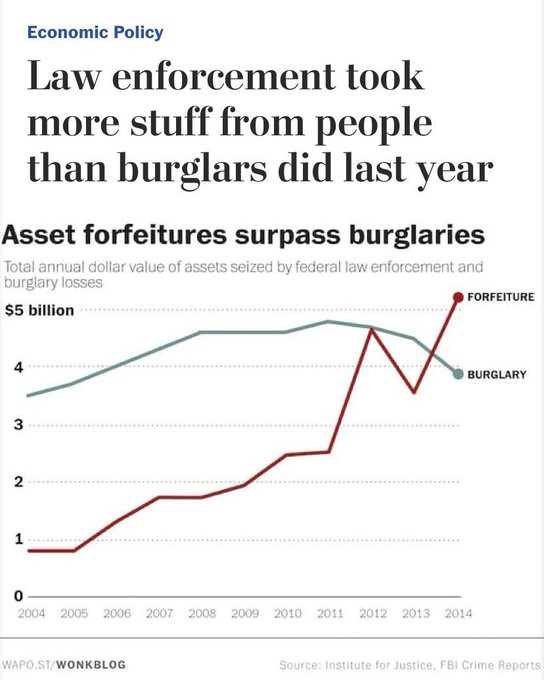 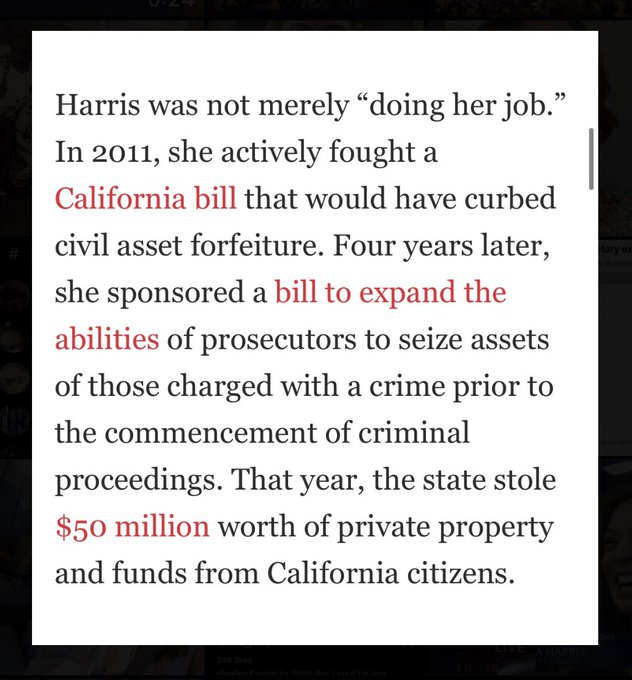 Biden worked with Reagan to create the Office of National Drug Control Policy (ONDCP), the propaganda arm of the War on Drugs.

This "Drug Czar" banned "any study relating to the legalization (for a medical use or any other use)" of cannabis.

https://www.leafly.com/news/politics/joe-bidens-drug-war-record-is-so-much-worse-than-you-think 5/
Joe Biden's Drug War Record Is So Much Worse Than You Think | Leafly

He cultivates a Cool Uncle Joe image, but Biden has been a chief architect of America's drug war and mass incarceration crisis. And he still won't legalize. 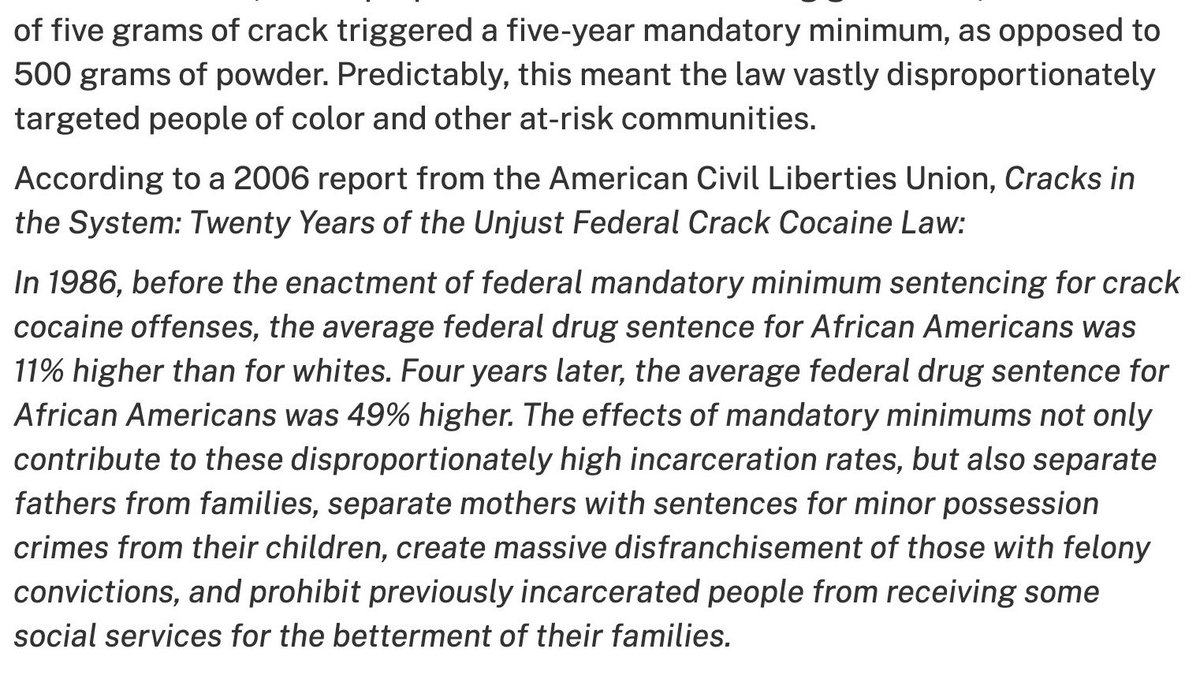 Biden made the opioid epidemic harder to fight, by banning social services like the safe houses used to treat those struggling with addiction.

For decades, he promoted the War on Drugs. Now, experts say Biden’s laws ended up worsening the opioid epidemic in the very places he says he can win in 2020.

https://www.politico.com/magazine/story/2019/05/23/joe-biden-2020-drug-war-policies-opioid-crisis-226933/
Biden led the criminalization of raves, pushing to jail those associated with them and literally "bulldoze down" the venues. (Credit to @nandorvila for the video.) 8/
The RAVE Act that Biden passed to do this stifled information about safe drug use, resulting in preventable deaths.

Parents, drug policy activists and event promoters say a 12-year-old law drafted by then-Senator Joe Biden is keeping partying teens from getting information about ecstasy use that could save their…

https://www.sgvtribune.com/2015/10/08/why-drug-safety-advocates-blame-joe-bidens-rave-act-for-music-festival-deaths/
Biden was so aggressive, he criticized Republican President George H. W. Bush for not being aggressive enough, demanding he literally invade foreign countries to fight drug dealers with military action. (Credit to @ggreenwald for the video.) 10/
Biden decimated South America by internationalizing the War on Drugs with his Plan Colombia, which displaced millions, killed thousands, and actually increased cocaine cultivation, creating the conditions that cause refugees to flee to the US. 11/ 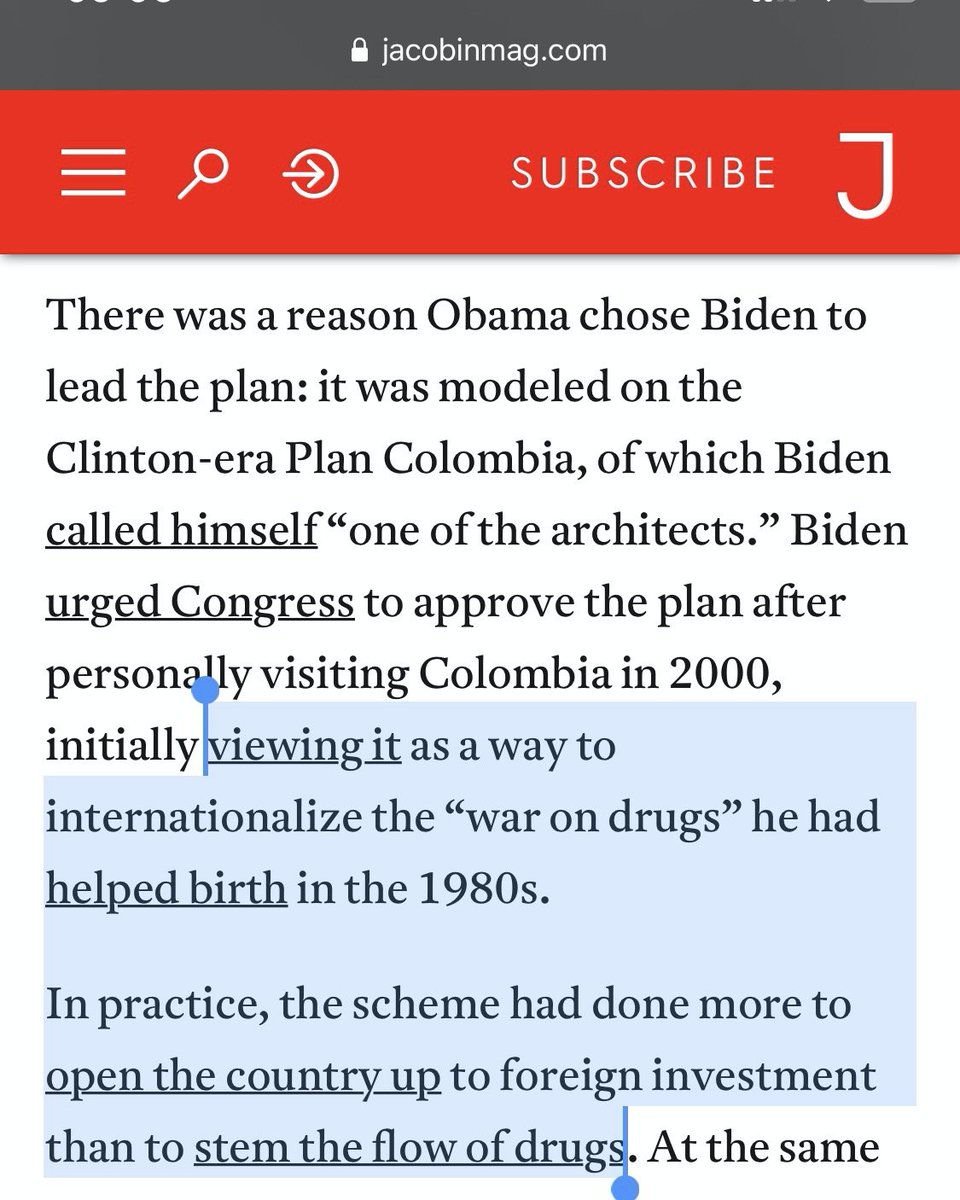 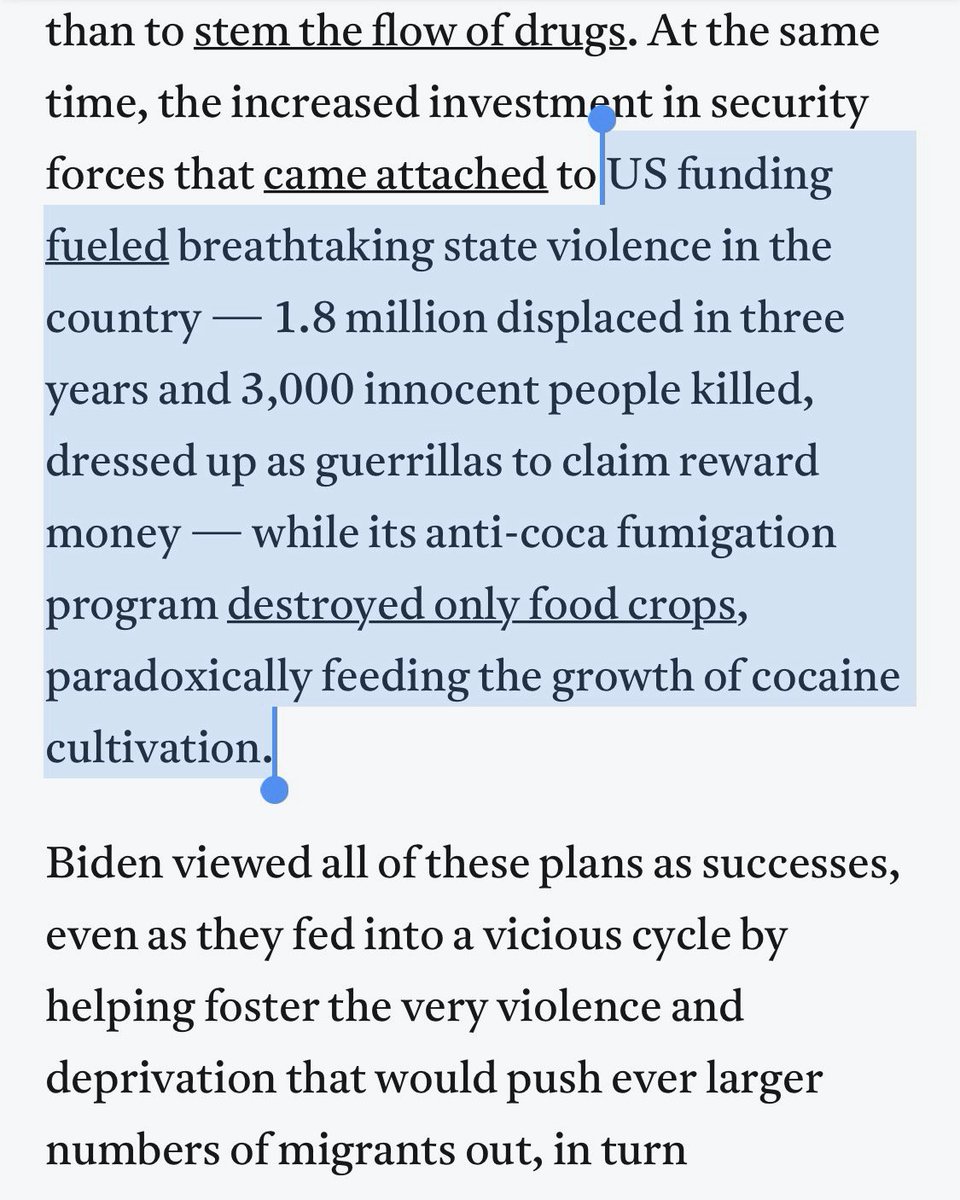 Despite his anti-drug zealotry harming disproportionately black and poor Americans, Biden's nepotism has shielded his own children from any consequences for their rampant drug use. His son even landed a lucrative book deal to chronicle his addiction.

During his 36 years in the Senate, Joe Biden helped craft some of the strictest anti-drug laws of the 1980s and 1990s. But drug reform advocates say his own children were able to avoid the brunt of...

https://www.washingtonexaminer.com/politics/biden-tough-on-drugs-policies-did-not-apply-to-his-childrens-marijuana-and-cocaine-offenses
Kamala Harris, though she's had less time in office, has carried on Biden's War on Drugs legacy with glee.

As recently as 2014, Kamala literally laughed at the idea of legalizing weed, despite running as a strong favorite in solid blue CA vs a Republican who supported it. 13/
It wasn't the first time Harris laughed at the idea of legal weed, either. (Credit to @WalkerBragman for the video.) 14/
Of course, Harris' decision to block California from joining less liberal states in removing marijuana from the DEA’s list of most dangerous substances resulted in disproportionate harm to her black constituents.

https://afropunk.com/2019/01/kamala-harris-has-been-tough-on-black-people-not-crime/ 15/
KAMALA HARRIS HAS BEEN TOUGH ON BLACK PEOPLE, NOT CRIME - AFROPUNK

For many people in the Black community, Kamala Harris' history as a prosecutor is disturbing and reason to

https://afropunk.com/2019/01/kamala-harris-has-been-tough-on-black-people-not-crime/
In fact, Harris was so aggressive in prosecuting drug use, she oversaw arresting 10% of San Francisco’s black population in just one year alone, prosecuted black women at 50x the rate of other CA counties, and caused 40% of CA’s felony drug convictions of black girls alone. 16/ 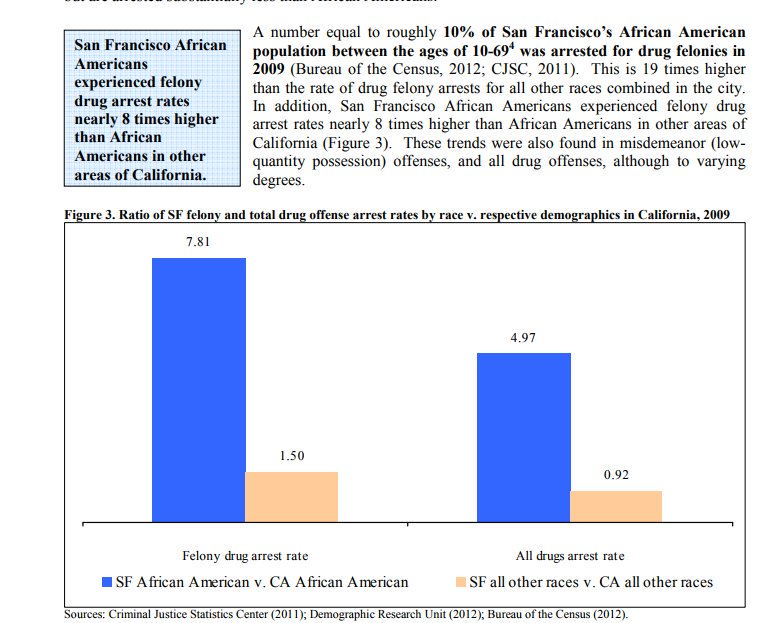 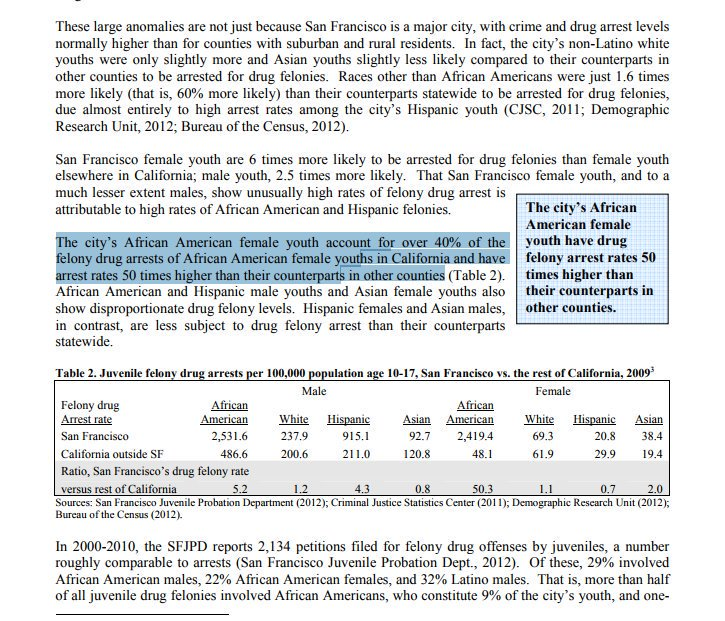 When the Supreme Court ruled that Harris' unconstitutionally overcrowded prisons were "cruel and unusual punishment," her lawyers pushed back to protect their prison labor profits. 17/ 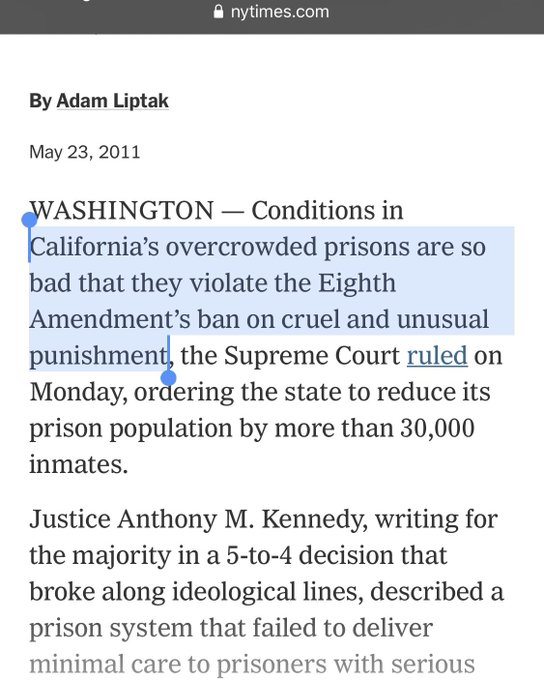 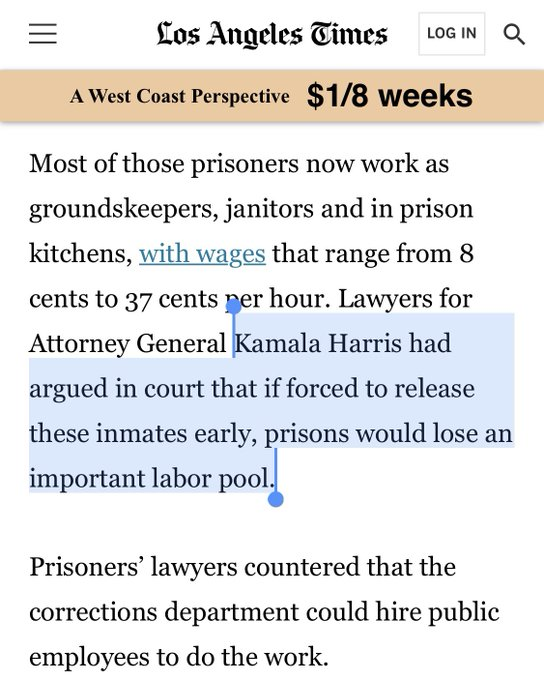 It's no surprise that Biden and Harris have built their careers on funneling disproportionately poor and black folks into the for-profit prison system, considering that their campaigns have been bankrolled by the people who run them.

https://theintercept.com/2019/12/31/joe-biden-fundraiser-centene-for-profit-prison/ 18/
Joe Biden Wants to End Prison Profiteering. One of His Top Fundraisers Is a Major Player in Prison...

https://theintercept.com/2019/12/31/joe-biden-fundraiser-centene-for-profit-prison/
When supporting legal weed became politically expedient, Harris shifted to laughing about how she herself smoked marijuana before and/or while locking others up for the same thing.

https://www.marijuanamoment.net/kamala-harriss-snoopgate-is-what-a-political-marijuana-controversy-looks-like-in-2019/ 19/
Kamala Harris’s SnoopGate Is What A Political Marijuana Controversy Looks Like In 2019

Sen. Kamala Harris (D-CA) turned heads on Monday after admitting that she smoked marijuana during college. But one detail about the prosecutor-turned-Democratic-presidential-candidate’s stoner days...

https://www.marijuanamoment.net/kamala-harriss-snoopgate-is-what-a-political-marijuana-controversy-looks-like-in-2019/
Harris' hypocritical exploitation of cannabis was so egregious that her own Jamaican father came out with a statement saying, "we wish to categorically dissociate ourselves from this travesty."

“Speaking for myself and my immediate Jamaican family, we wish to categorically dissociate ourselves from this travesty,” Harris’ father said in a statement.

https://www.politico.com/story/2019/02/20/kamala-harris-father-pot-1176805
Despite their watered-down campaign promise of decriminalization, Biden/Harris have since failed to make any meaningful move to deschedule cannabis or expunge the criminal records of those they imprisoned for its use. 21/ 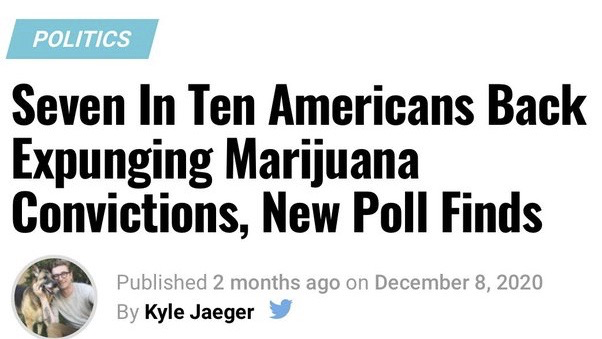 In fact, Biden even fired his own staffers over previous legal use they were tricked into divulging. Harris was not held to the same standard, despite her own admitted drug use.

Several staffers were informally told by transition officials that some past marijuana use would be overlooked, only to be told later that they were being asked to resign.

https://www.thedailybeast.com/biden-white-house-sandbags-staffers-sidelines-dozens-for-pot-use
The only time Biden seems to make any progress on legalizing marijuana, it's working to hand the growing industry over to Big Pharma, which will keep it from benefitting the black communities his War on Drugs has devastated.

https://www.vice.com/en/article/43kg3m/joe-biden-is-coming-for-your-legal-recreational-weed 23/
Joe Biden Is Coming For Your Legal Recreational Weed

The former VP and 2020 candidate's plan for cannabis is the industry's worst nightmare: It could blow up the system across the country.

https://www.vice.com/en/article/43kg3m/joe-biden-is-coming-for-your-legal-recreational-weed
Despite his campaign promise to eliminate the racist mandatory minimum sentences for drug convictions that he once championed, Biden has pushed to extend them instead now that he's in office. 24/ 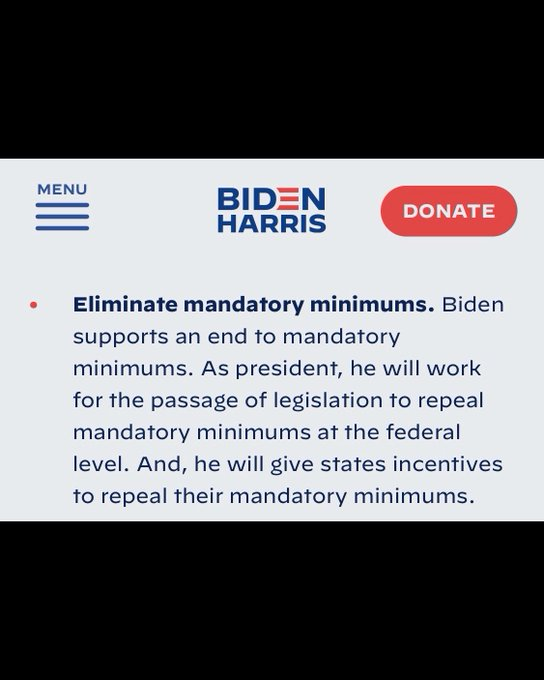 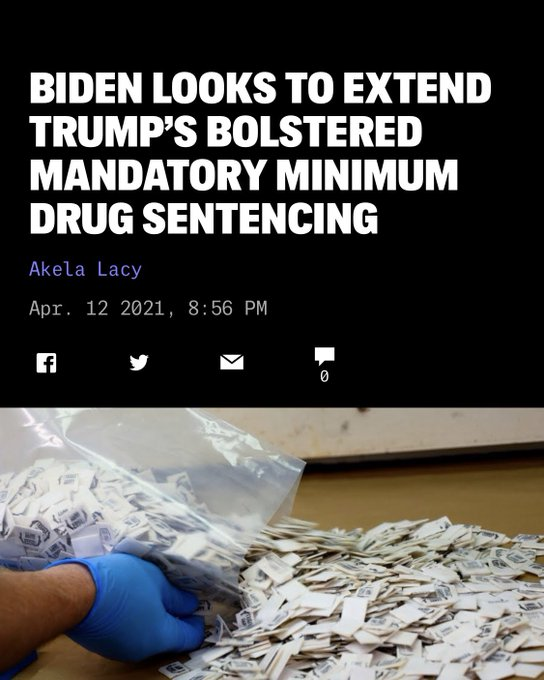 You can follow @WaitingOnBiden.
Tip: mention @twtextapp on a Twitter thread with the keyword “unroll” to get a link to it.