Read on Twitter
One thing we don’t talk enough about when we deal with surging white nationalism, which is now commonplace enough for replacement theory to be casually touted on @FoxNews in primetime, is the extent to which it’s also deeply misogynistic. This piece from the @nytimes: 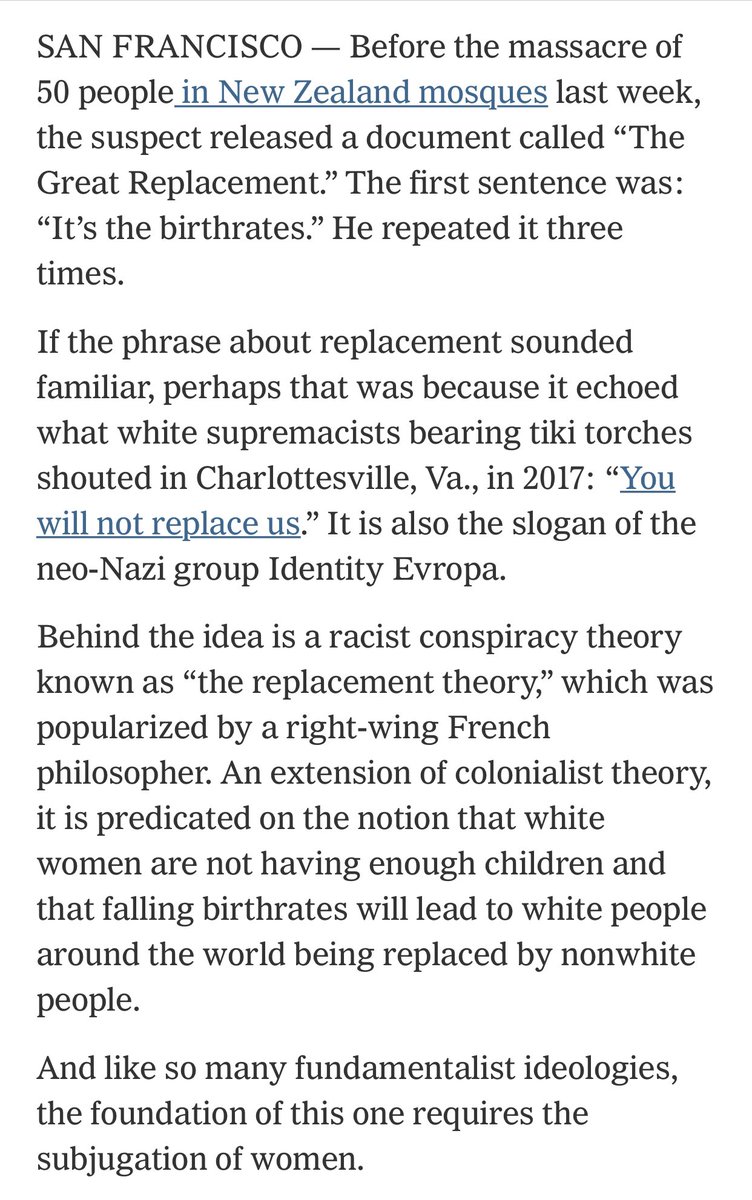 When you think about how connected far right politics have been tied to questions of what women (white women specifically) should and shouldn’t be doing with their lives and bodies (working outside the home, abortion, sexual availability, prostitution etc) it’s quite revelatory. 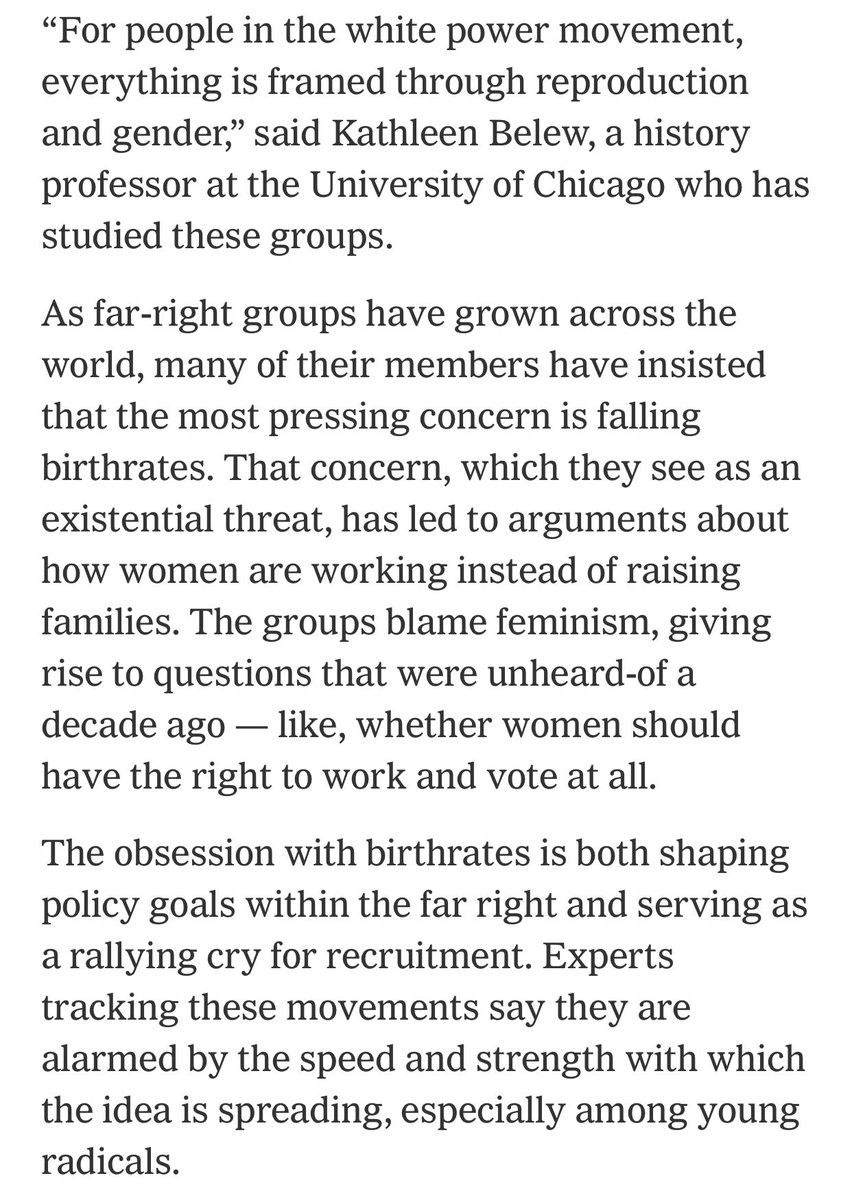 And these groups prey on the fragility of some white men, to draw them in... 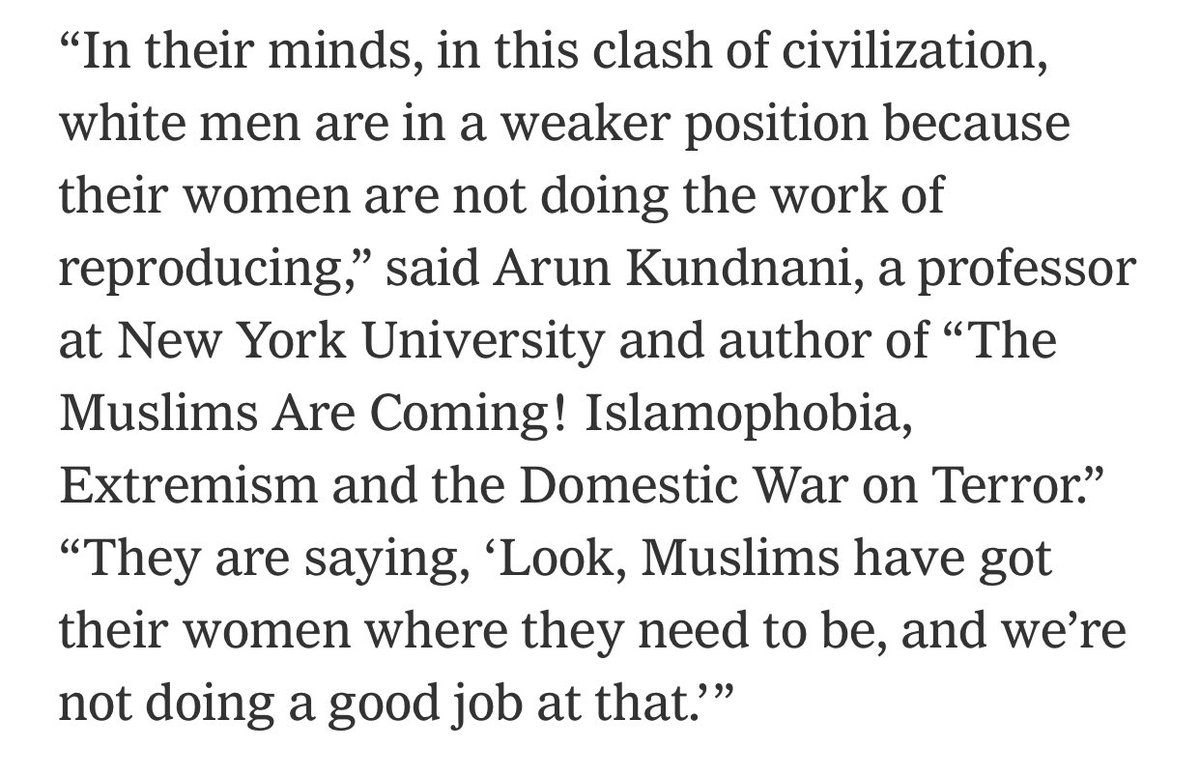 And of course, demographic panic over nonwhite immigration quickly gets tied in, in a “Camp of the Saints” kind of way (recall that was a tract cited by Trump’s pal Steve Bannon...) 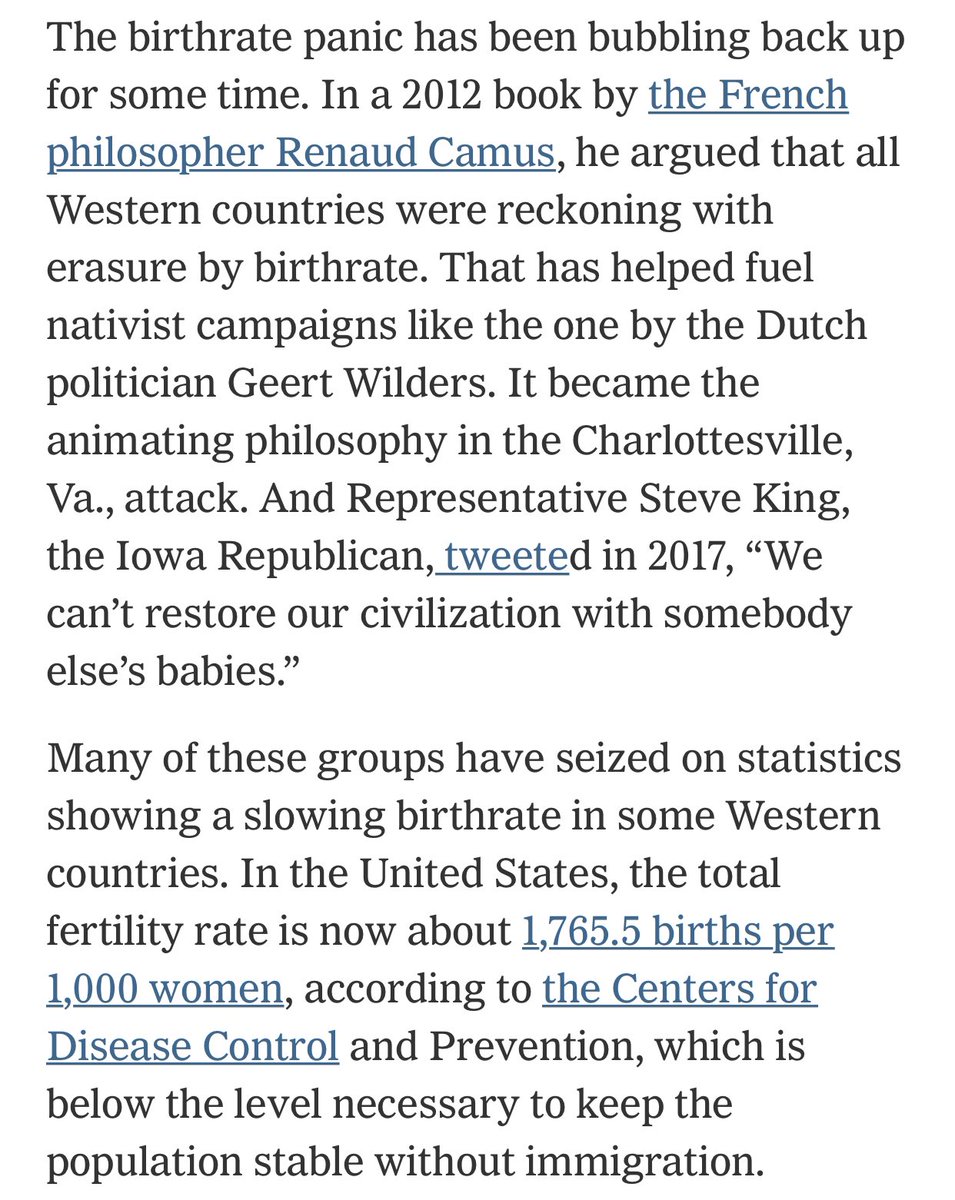 And once you get a group of men fixated on civilizational panic about non-white and non-Christians immigrating, becoming citizens, voting — and doing so like most nonwhite people; meaning voting for the more liberal party — and having kids, it’s not hard to get to violence. 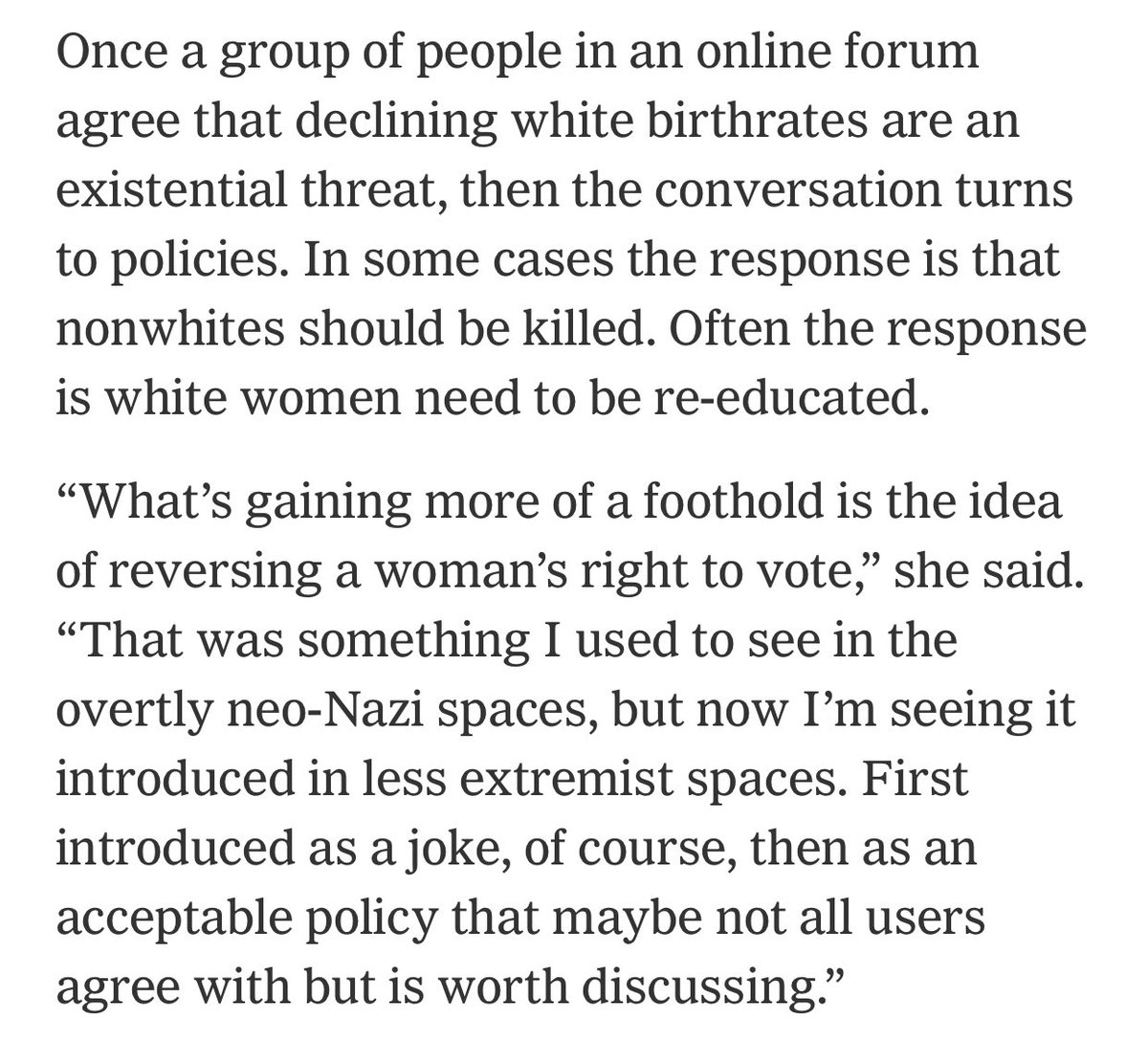 Here is the full @nytimes article so you can read it in full for yourself: https://www.nytimes.com/2019/03/18/technology/replacement-theory.html
‘Replacement Theory,’ a Racist, Sexist Doctrine, Spreads in Far-Right Circles (Published 2019)

A conspiracy theory predicated on the idea that white women are not having enough children appears to be bubbling up across the globe.

https://www.nytimes.com/2019/03/18/technology/replacement-theory.html
It’s not hard to see why people who feel these fears remain so loyal to Donald Trump, who basically vowed to reverse these civilizational changes and put white, Christian men back on top socially (the way they remain economically.) He was a human “F-you” to social modernity.
This is why I so often talk about apartheid South Africa in reference to what’s happening in America right now. Yes Tucker Carlson helpfully is making it plain for us, but he is hardly alone on the right in raising this “replacement panic,” which also fuels voter suppression.
This civilizational panic is dangerous bc it’s seductive to some people who look around them and see things changing: more nonwhite faces on TV and in sports, multicultural celebrity culture, “wokeness” among empathetic whites, and nonwhite voters sometimes getting their way.
And so you see this broad push on multiple levels on the right to slow the rate of change; slow down nonwhite voters, roll back women’s liberties, reverse LGBTQ gains, including by exempting conservative Christians from civil rights rules... it’s why they obsess over the courts.
Of course replacement theory (also called The Great Replacement or “white genocide”) is also deeply anti-Semitic; in that it claims a shadowy group of Jews are the masterminds of wiping out the white Christians of the West. George Soros is a fave target. https://www.theguardian.com/commentisfree/2019/aug/05/great-replacement-theory-alt-right-killers-el-paso
The 'white replacement theory' motivates alt-right killers the world over | Rosa Schwartzburg

This conspiracy theory is influencing killers from Germany to New Zealand and now, it seems, El Paso

https://www.theguardian.com/commentisfree/2019/aug/05/great-replacement-theory-alt-right-killers-el-paso
Which is why it shouldn’t be surprising that the second half of the Charlottesville chant was “Jews will not replace us...” https://www.washingtonpost.com/news/acts-of-faith/wp/2017/08/14/jews-will-not-replace-us-why-white-supremacists-go-after-jews/
Perspective | ‘Jews will not replace us’: Why white supremacists go after Jews

Are Jews white? Not according to the neo-Nazis rallying in Charlottesville.

https://www.washingtonpost.com/news/acts-of-faith/wp/2017/08/14/jews-will-not-replace-us-why-white-supremacists-go-after-jews/
Bottom line, white nationalists have been trying for decades to creep out of the shadows and into the mainstream. They have largely achieved that. And as we saw on January 6th and in the years leading up to it, we are all in danger because of it. https://www.usnews.com/news/national-news/articles/2020-10-06/dhs-white-supremacists-the-most-persistent-and-lethal-threat-within-the-us
DHS: White Supremacists ‘The Most Persistent and Lethal Threat’ Within the U.S.

You can follow @JoyAnnReid.
Tip: mention @twtextapp on a Twitter thread with the keyword “unroll” to get a link to it.