Read on Twitter
Together with a number of colleagues, I'm a co-author of a contribution to Quantitative Science Studies Volume 2, Issue 1 - which explores gender issues in physics... as I read the issue, here are some comments/highlights/lowlights

https://direct.mit.edu/qss/issue/2/1
The editorial article by @LudoWaltman outlines some the challenges associated with publishing controversial papers - while it is true that folks like AS may have problematic views - how much energy do we need to refute them, vs actually fixing things? 2/

https://direct.mit.edu/qss/article/2/1/224/99123/Understanding-gender-differences-in-science
As QSS opted to publish the AS (Strumia) paper, it is good that QSS opted to solicit commentaries that provide the literature with a holistic view of wider issues surrounding misogyny in science, and particularly physics

3/
The AS article has been republished in the issus. I don't need to repeat the argument here, the storm is already whipped up.

4/
https://direct.mit.edu/qss/article/2/1/225/99129/Gender-issues-in-fundamental-physics-A
As noted in the Editorial - and this is worth repeating - CERN cut their association with AS, as a consequence of the talk which caused such a storm & has consumed so much of our time

The University of Pisa and the European Research Council say they are also opening investigations into Alessandro Strumia’s conduct.

https://www.nature.com/articles/d41586-018-06913-0
Anderson, Nielsen & Schneider provide a comprehensive view that AS has applied selective referencing to construct their world view regarding how men and women do physics, including an amazing table re-interpreting how those citations should be used

https://direct.mit.edu/qss/article/2/1/254/99124/Selective-referencing-and-questionable-evidence-in
(have to get back to the 'day job' - will resume the thread in a bit)
Anderson et al. highlight that AS's selective use of citations is an important point - citations are not equal to quality (& at best can indicate impact) - which refutes much of AS's argument that we can look at the quality of scientists via citations

https://direct.mit.edu/qss/article/2/1/254/99124/Selective-referencing-and-questionable-evidence-in
Anderson et al. continue & highlight that there are fundamental flaws in how AS has constructed the initial study - bibliometric study is rarely 'abstract' or 'objective', so rigorous methods must be followed to hypothesis test (or you can prove your own hypothesis easily)

8/
Anderson et al. continue & highlight that the raw data that AS has used is limited in scope, as while there are big numbers the analysis of 'hiring' does not work as AS suggests - and this is easy revealed by comparing median & mean scores from AS's dataset

9/
In the summary of Anderson et al. they explore the implications of the AS paper, and comment that AS's analysis is overly simplistic and conclusions (e.g. that there is any gender bias in physics) are unsubstantiated

10/
Next up is the work I helped with - Ball et al. - where a group of us work through Strumia paper, associated literature, the data sets, and more ...

https://direct.mit.edu/qss/article/2/1/263/99125/Gender-issues-in-fundamental-physics-Strumia-s
In Ball et al., we share Anderson et al.'s critique that AS presents a biased literature review, and specifically we say: "Strumia (2021)’s lack of balance in citing relevant work is misleading and arguably disingenuous."

12/
Thanks to the hard work of @erinhengel in particular, we focus on trying to unpick the cofounder based issues in AS's data & account for a few known issues. Our analysis reveals that apparent gender bias is rooted in the citation distributions structure, & not true bias

13/
This careful analysis (see our paper) dismantles AS's argument re: the citation-based raw data sets presented, and this makes the shaky conclusions presented even more unsubstantiated - and our analysis echoes much of the literature too

https://direct.mit.edu/qss/article/2/1/263/99125/Gender-issues-in-fundamental-physics-Strumia-s
In all of this discussion - the Strumia (2021) assertion that citations are a direct measure of scientific "quality" of a scientist is a key tenant of the original argument - this is largely disagreed with by most of the bibliometric community (see our paper for receipts)

15/
We also highlight that the media coverage, and rallying cry that publication of the Strumia (2021) paper + the platform of the original talk, have had an impact in physics and more widely in STEM, and much of this has been negative (especially for women)

16/
Or as we wrote more carefully than my tweets get written...

Next up, Hossfelder's contribution on the AS paper, entitled "Analyzing data is one thing, interpreting it another"

https://direct.mit.edu/qss/article/2/1/273/99135/Analyzing-data-is-one-thing-interpreting-it
Hossfelder comments that AS may have a big data set and this could reveal some statistical differences in the citation patterns, YET analysis of these trends cannot be conducted in a vacuum - there is a historical & social context to consider...

19/
Next up - Thelwall discusses the AS paper - and again highlights that the cofounders here are hugely difficult to disentangle, and make analysis of the statistical results very difficult to explore with confidence

20/
https://direct.mit.edu/qss/article/2/1/275/99134/Female-contributions-to-high-energy-physics-in-a
Thelwall - "Nobody should make hiring decisions based on publishing and citations alone. Moreover, career-based bibliometric statistics involving gender are always hard to interpret because of the many factors that affect women more."

22/
I really like the Thelwall highlights personal choice - there are more female biologists, but fewer female mathematicians, physicists & computer scientists - and that lack of women in higher energy physics is because many women do not want to do it (given other choices)

23/
Certainly I can see this in my field - if we create/sustain hostile work environments, where sexism and more are rife, then women (and members minority groups) will choose other career choices, in addition to factors that actively/passively push them out...

25/
The second Strumia (2021) paper starts with a cherry picking of the four critique papers, with a selected (out of context) quote from Hossfelder, and a dismissal of the rest of us as we don't work in high energy physics

https://direct.mit.edu/qss/article/2/1/277/99133/Reply-to-commentaries-about-Gender-issues-in
AS comments on the mean/vs median issue highlighted by Andersen re: the bibliometric data for hires - AS's reanalysis does not give me more confidence in this graph - they look to be overlapping broadly well (if we consider distribution structure) 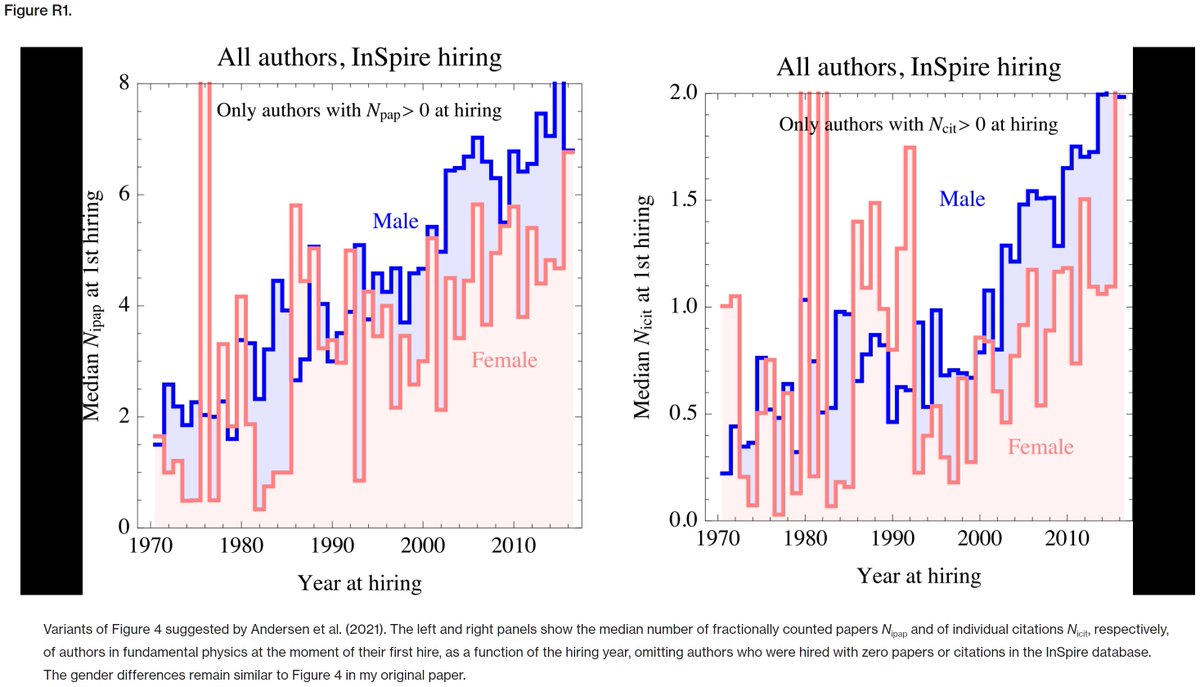 AS continues to comment on Andersen's critique that no sociological analysis has been done... doubling down saying that "well I followed what I did last time"

AS addresses Ball et al. [again, not my COI as a co-author] - saying that we do not suggest confounders, which we do explicitly suggest (e.g. winning an award which boosts citations) and some of which we control for in our new analysis...

29/
Ooh - AS now goes on to say that we (Ball et al.) are ideologically motivated in how we construct our controls re: confounders & the associated arcsinh distribution analysis

30/
AS critiques our use of the arcsinh function as it is does not satisfy the ability for us to sum sub distributions together (there is even an equation included to show us...)

uhm - wot - yes - we can all do this maths too. It doesn't invalidate our choice of model function.

(thread aside - this is my face when considering whether I need to know that arcsinh(sinh(2) + sinh(2)) = 2.7, do I need a degree in high energy physics for this 'new' knowledge? Or can I just look at the Taylor expansion and go - 'duh?')
(still an aside - the duh is not that I know this should equal 2.7, I'm not a human calculator - but I know you can't sum these functions like this, excluding in some small angle approximations, but we are getting v. v. distracted, as I suspect AS wants...)
AS next is unhappy that we age corrected the citation data - well if women were not allowed to do high energy physics in the past (and be cited), this might be important to control for in considering if there is an gender bias...

31/
AS next is unhappy about how we sample just 5 journals (we explain why we did this in our paper) - with some incorrect rant about what journals select for in their publications, and if he is right then the journals are being sexist (which they probably are...)

32/
There's a men's soccer analogy in AS's paper next - it doesn't make much sense, so I won't repeat it.

33/
"But such a generic problem loses quantitative significance when applied to fundamental physics: a field far from politically sensitive topics and guided by objective data."

Uhm, no. Science is political. Go look up what how CERN is justified re: international collaboration. 34/

AS continues to critique Ball et al.'s comments re our criticism of the Strumia (2021) paper's (biased) citations - at this point I note that Andersen et al. also took apart AS's interpretation of the literature, which AS did not comment upon... https://twitter.com/BMatB/status/1380197192791511042

UGH - AS now starts messing around w/ a definition of women re: chromosomes. I note that AS is a physicist and in this section demonstrates their very limited knowledge of chromosomes, sex and gender.

Casual links of (any) higher male variability & chromosomes is limited.

37/
This paragraph is quite telling - lots of very long words, but says very little - except to say that expecting someone simply trained in high energy physics to do sociological & bibliometric analysis should be considered with extreme caution

Next AS informs us that he has no biases etc. and we (Ball et al.) are just attacking him in terms of activism.

I can't really address this in 280 characters, and I can only assume that AS is immune to the harm that his paper has caused.

39/
The final bit of the Strumia (2021) paper is simple posturing about values & ideology in how people argue within STEM - there's nothing worth me repeating here.

https://direct.mit.edu/qss/article/2/1/277/99133/Reply-to-commentaries-about-Gender-issues-in
A long thread - with many typos - sorry.
It's amazing how much work has been done to try to address the harm that Strumia (2021) has caused, and how little of it the original author has engaged with.

To people of all genders: Do physics because it's awesome, and because you can.

42/42.
You can follow @BMatB.
Tip: mention @twtextapp on a Twitter thread with the keyword “unroll” to get a link to it.