I really don't love how this test is worded, though, because everything's from the perspective of a neurotypical baseline.

"Overly" talkative? Compared to...? "You do X when it's inappropriate." According to...? 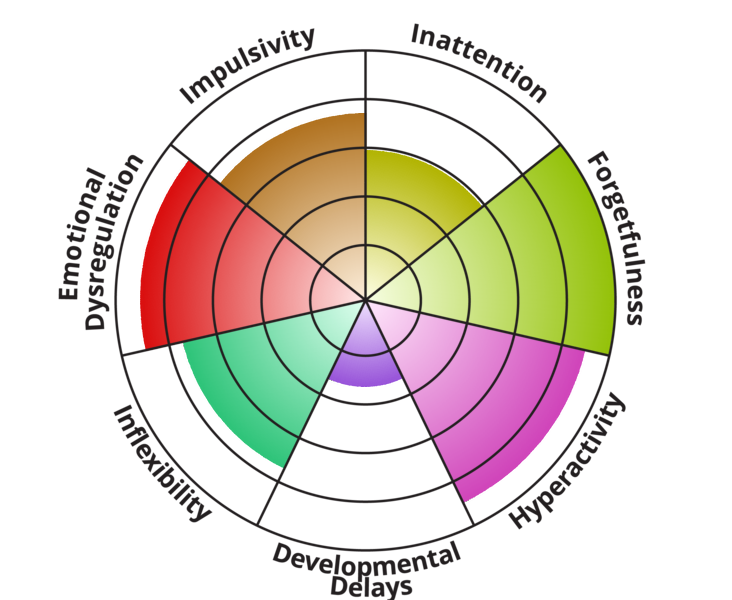 It's phrasing like that which kept me from diagnosis for my entire life - phrasing that assumes a frame of reference I by definition cannot have.

Which means *I'M* not supposed to notice my disorder. It's instead supposed to be reported on by people in my life.
ADHD, as described, isn't ADHD as experienced.

Instead, it's just a list of the behaviors which piss off parents and teachers, which they want us to stop.

And that's kind of hot garbage.
Like, here are the diagnostic criteria for ADHD.

"1: Often fails to give close attention to details or makes careless mistakes in schoolwork, at work, or with other activities."

Well... no. Obviously not. I pay VERY close attention to details, and by definition, any mistake is/
a careless mistake. What, are people out here making CAREFUL mistakes?

What I'm not paying close attention to is what you would LIKE me to pay attention to. What you have failed to make interesting, since there's so much that's louder in the room. /
"2: Often has trouble holding attention on tasks or play activities."

I can play minecraft for nine hours straight and forget that my body exists.

It's not that I have trouble holding attention - it's that I'm not in CONTROL of my attention. The tasks are, whatever they are.
"3. Often does not seem to listen when spoken to directly."

Literally nothing to do with my experience, here.

What if, instead, you ask "Do people have to say your name to get your attention, or to have to pull you out of your thoughts before they start talking to you?"
"4. Often does not follow through on instructions and fails to finish schoolwork, chores, or duties in the workplace (e.g., loses focus, side-tracked)."

Okay, that one seems fair enough. Would be great if it wasn't also the one that was taken as a glaring personality flaw.
"5. Often has trouble organizing tasks and activities."

No, that's hot garbage. I am /excellent/ at organizing tasks and activities.

Because my brain can't do it automatically.

So I have to consciously do it.

But the DSM isn't asking about that - it's ignoring what the /
actually Neurotypical experience is, possibly because that's not an experience they examine all that much.

"6. Often avoids, dislikes, or is reluctant to do tasks that require mental effort over a long period of time (such as schoolwork or homework)."

Again, ridiculous.
I can pour out mental effort like water for days at a time.

What I can't do is to spend that energy on something that's boring, that doesn't hold my attention, or which has too many different steps.

Again, the only ones in relatable plain terms are the ones that get called personality flaws.
"8. Is often easily distracted."

No. If the thing I'm working on is interesting, I /can't/ be distracted.

"9. Is often forgetful in daily activities."

If I'm trying to self-report, how exactly would I know?
"9. Often fidgets with or taps hands or feet, or squirms in seat."

Or a thousand other coping mechanisms we use to stim, because you made it clear that what we were doing was inappropriate.

"10. Often leaves seat in situations when remaining seated is expected."

Expected.
"11. Often runs about or climbs in situations where it is not appropriate (adolescents or adults may be limited to feeling restless)."

When, precisely, was 'quietly' a word used to describe the platonic ideal of children at play?
"13. Is often “on the go” acting as if “driven by a motor”."

I sat and focused on books for ten hours straight, forgetting that meals or bathrooms existed. Is that on the go?

It's definitely the behavior you're TRYING to ask about, but not what you're actually asking.
"14. Often talks excessively."

Anyone else follow the rules, raise your hand to answer questions, and eventually have teachers tell you to stop raising your hand?

Hard to follow a rule you never make explicit, there, champ.
"15. Often blurts out an answer before a question has been completed.
16. Often has trouble waiting their turn.
17. Often interrupts or intrudes on others (e.g., butts into conversations or games)"

A) The world seems so slow - people pause for SO LONG, and you think they're done talking. People use SO MANY extra words. People don't move efficiently! They don't line up right! They're all... just so slow, always!

or,
B) My brain has, without letting me know, already filled in the last words you were saying, thought of five questions in response to it, sorted those in order of importance, queued up one to ask, and made me start asking it.
And that's it. This is quoting directly from the CDC, who are in turn quoting the DSM-V.

It's only different for adults in that they require fewer symptoms from each category to be present.

Because you've probably built some coping mechanisms by then. https://www.cdc.gov/ncbddd/adhd/diagnosis.html
Symptoms and Diagnosis of ADHD | CDC

Deciding if a child has ADHD is a several-step process. This page gives you an overview of how ADHD is diagnosed.

https://www.cdc.gov/ncbddd/adhd/diagnosis.html
The diagnostic criteria are criminally short, criminally flimsy, and based almost entirely on possibly misunderstood signs (as observed by other people) instead of lived experience of symptoms (as observed by the person actually dealing with them).
Perfectly said -

So much of what is read by others as "deficit,"

Is in fact "surplus," which we're unable to regulate.

It's that disconnect that makes me so thankful for #NeurodiverseSquad / #ADHDTwitter.

If it weren't for y'all, I'd never have recognized myself. The adults the world was apparently counting on to recognize it called me by turns "Lazy" or "Gifted." "Talented" but "Unmotivated".
It's why I try to pass that favor on, too, because fuck -

It is so much better, knowing myself.

JESUS CHRIST A THOUSAND TIMES THIS

"How long was it between you thinking you needed this appointment, and taking your first steps to make it?"

I seem to have done a thread.

Become a supporter of nome today! ❤️ Ko-fi lets you support the creators you love with no fees on donations.

https://ko-fi.com/nomedabarbarian
Additionally, if you're part of Twitter (and even more so, part of TTRPG twitter), and find a lot of this ringing true...

With this doing numbers, I'm probably going to have to mute this soon. Feel free to tag me in the QTs.

I've had some folks defending the DSM and its definitions, or suggesting that I'm quoting it in a different way than it's intended, or saying that psychologists/psychiatrists use other tools.

I'd like to address that a bit.
The DSM is the "Diagnostic and Statistical Manual of Mental Disorders, Fifth Edition." It is the principal authority for psychiatric diagnoses, and the definitions it uses are often used to determine things like "will my insurance cover this."

It's a diagnostic manual.
To the folks saying that it /has/ to rely on (external) signs instead of (internal or self-reported) symptoms,

ADHD and OCD and SPD and ASD might all present with certain identical signs, rooted in very different symptoms. They may also be comorbid.
If the only diagnostic criteria are signs as noticed by parents and brought to a health care professional, then you are assuming

A) Children's signs will be noticed by parents, who
B) Recognize them as indicative of a disorder, instead of just calling the kid dumb/lazy/bad, and
C) Have the resources to bring that child to a mental health provider, because
D) There is a pediatric psychologist in their area who
E) Will recognize the kid's behaviors and
F) Accurately diagnose the kid.

I wish you could see my mentions.
Because that process does /not/ work.

It assumes that the kid won't invent any coping or masking behaviors on their own:

SPOILER ALERT, MOST OF US DO. WE'RE PROBLEM SOLVERS.
It assumes a stable household with parents who give a shit.

It assumes doctors who won't ignore or discount the kid's behaviors.

And even once you get past all of that,

It assumes that the behaviors listed will match the ones in the DSM.
And - FUCK, I DIDN'T EVEN CONSIDER - given that this disorder has a documented genetic / inherited component,

It assumes a LIKELY UNDIAGNOSED PARENT will have the ability to navigate the multi-headed hydra of our medical system in the US to do so. https://twitter.com/q_aurelius/status/1370476719052836864?s=20

Given that we're being raised by the generation where it was thought of as a disorder that only male children got, and grew out of?

There isn't a seperate DSM section for Adults. These are the criteria.

We're left with in all likelihood tens of millions of undiagnosed Americans,

Who almost certainly don't have access to Mental Health Care,

Who have to first suspect something fixable is up with them.
Instead of just internalizing the voices of every authority figure in our lives, and deciding that we're clearly just pieces of shit, full of wasted potential.
So, when we as adults finally decide, based on hearing something from someone about maybe this being something, to check The Book,

You know, the one that's available to us, the one that doesn't require us spending money we don't have to go to a doctor?

We get the DSM.
And we take one look at the diagnostic criteria, and go, "Well this clearly isn't me."
Or maybe we decide to do it right, and we got to a doctor we can't afford, and they're not a specialist in ADHD, so they ALSO go to The Book,

And ask us the questions out of it,

So they tell us we don't have ADHD.
We can't go directly to the specialist after all, because we have to be referred TO a specialist by our GP, and if they have something in their head like "ADHD doesn't happen in girls" or "ADHD goes away when you grow up" or

"You can't have ADHD if you did well in School."
Then that care is walled off from us.

And we're already prone to think of ourselves as failures, somehow. So a doctor said, "No, you definitely don't have it,"

And what are we supposed to do, say we're smarter than them?
Having diagnostic criteria that relied on the honest self-reported experience of the patient, as INFORMED BY the signs reported by others in their life, would save this trouble.

Hell, even just phrasing the questions that way. "Have people SAID TO YOU that you [x,y,z]?"
You know, since we have a disorder that's often characterized by answering the exact question asked, without understanding the context of the question?

By not understanding rhetorical questions to not be wanting an answer?

You know, we natural and accidental pedants?
"Psychiatrists are using other tools than this."

Great. Good. Glad to hear it.

I didn't see a psychiatrist until I was thirty, and that was only AFTER doing the groundwork myself.

So unless you're pushing for a system of universal mental health care, including screening?
Well, until that day, I stand the fuck by what I the fuck said. https://twitter.com/NomeDaBarbarian/status/1369852771281735684?s=20