Read on Twitter
The acting Secretary of Defense appears to have intentionally removed the authority of the D.C. National Guard to leave the Capitol undefended.

On Jan. 5, former acting Defense Secretary Christopher Miller issued a memo to the secretary of the Army placing some extremely unusual limits on National Guard forces

https://www.nationalmemo.com/miller-disarmed-national-guard
This memo, published the same hour as hostile forces gathered in D.C. for the terrorist attack, seems tailor-made to give the insurrectionists an unholy advantage.

No other National Guard has to ask permission to defend us. D.C.'s needed *personal* authorization of the SecDef.

We had already heard that the D.C. National Guard was forbidden from preparing for a violent insurrection, but this jumped out at me: forbidden from using any intelligence, surveillance, or reconnaissance assets.

Not only were they forbidden from moving - they were *blinded.*

This blinding of America's guardians from the onslaught of right-wing terror groups started *early in 2020* just as the Democratic Party selected Joe Biden as a candidate for president.
That is when Trump and his co-conspirators began:
- Hyping a fake left-wing threat
- Deploying "Federal law enforcement" and measures that are against the Geneva convention
- Instructing DHS intelligence to *not* report on right-wing violence
- Justifying vigilante violence
Bryan Murphy turned whistleblower in mid-2020 when Trump's political appointees instructed DHS Intelligence & Analysis to:

1. Cease reporting on Russian interference in favor of China and Iran 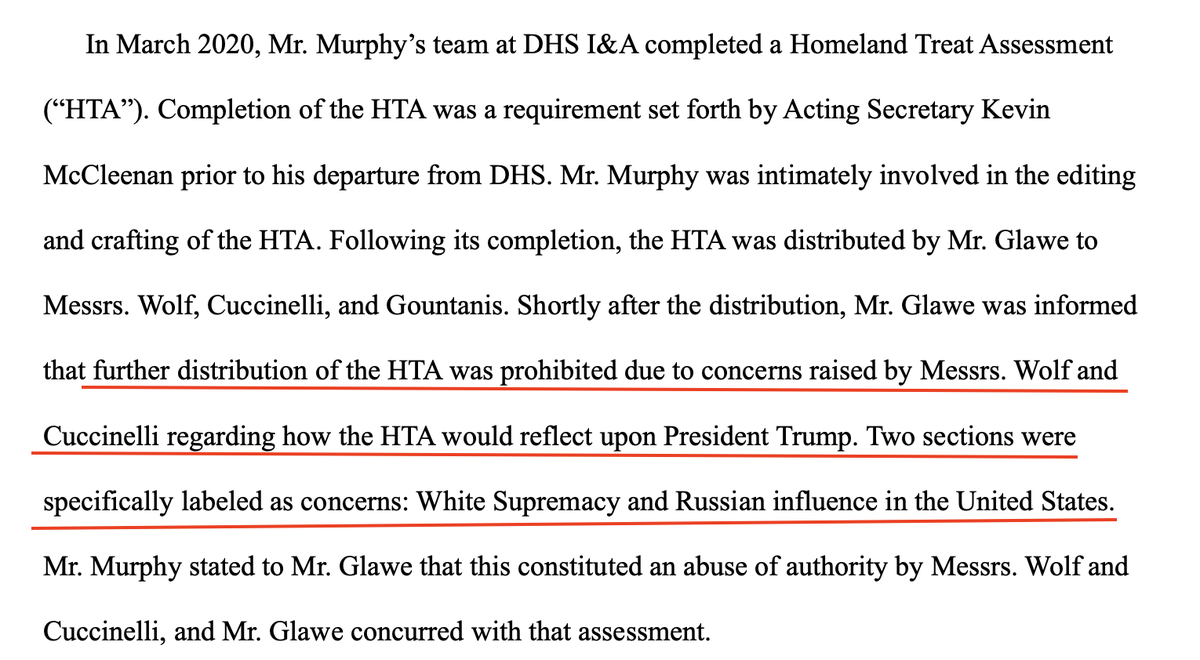 For months, Trump's co-conspirators put pressure on the DHS intel agency to not only downplay attacks from the people who *just attacked the Capitol,* but to make the left-wing out to be the real danger.

It's almost like the GOP knew they were going to have a coup d'état that they would blame on the ephemeral "Antifa."

Which is *exactly what they did* even though the coup failed.

But this conspiracy apparently started *many months* before. https://www.washingtonpost.com/nation/2021/01/07/antifa-capitol-gaetz-trump-riot/
Rep. Matt Gaetz and other GOP politicians baselessly suggest antifa is to blame for pro-Trump mob...

On the House floor, Rep. Matt Gaetz (R-Fla.) baselessly claimed that "some of the people who breached the Capitol" were "members of the violent terrorist group antifa" masquerading as Trump support...

https://www.washingtonpost.com/nation/2021/01/07/antifa-capitol-gaetz-trump-riot/
Chad Wolf himself tried to alter intelligence assessments to include left-wing threats for which there was no credible intel...right during Barr's "Federal law enforcement actions."

Which seem increasingly like the proving ground for January 6.

Brian Murphy blew the whistle and attempted to speak to Congress prior to the election, but Trump's DHS obstructed *that* effort as well. So the hearing came in December.

Later in the summer, after Murphy reported the abuses, Trump's co-conspirators were caught using the DHS to try to create a media narrative that supported vigilante violence including murder.

A preview of what they potentially had planned. https://www.nbcnews.com/politics/national-security/internal-document-shows-trump-officials-were-told-make-comments-sympathetic-n1241581
DHS memo told officials to make comments favorable to Kenosha shootings suspect

In prepping DHS officials for questions about Rittenhouse, the document suggests they say he took a gun to Kenosha "to help defend small business owners."

https://www.nbcnews.com/politics/national-security/internal-document-shows-trump-officials-were-told-make-comments-sympathetic-n1241581
Federal law enforcement was told to create sympathy around a cold-blooded killer, to make him seem like a positive or even patriotic figure. 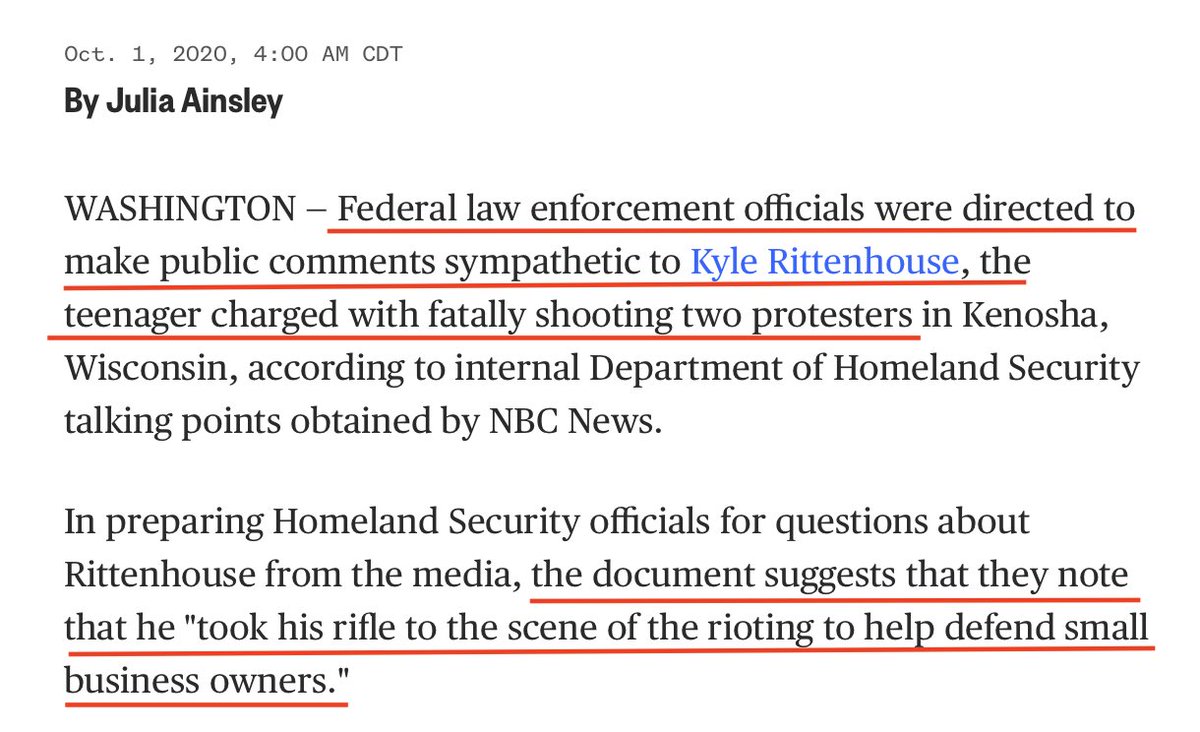 Trump's co-conspirators instructed government professionals to push a narrative of Rittenhouse committing murder in self-defense - before the courts had any chance to act as triers of fact.

All this in the face of evidence that paramilitaries were deploying on U.S. soil.

Now let's go back to the SecDef's order that D.C. National Guard couldn't even use ISR assets. Never mind their bullshit about "we didn't like the optics" - this interference directly with DCNG's mission, and for no reason given.

What would Intelligence, Surveillance, and Reconnaissance do on home soil?

THEY WOULDN'T LET THE D.C. NATIONAL GUARD DO ANYTHING.
So to recap:

1. DHS I&A picked up Russian interference and right-wing paramilitary threats to the homeland in March 2020.

Just from open source information, it appears that there was a year-long conspiracy to hide the threat of violent right-wing paramilitaries while hyping a fake threat from the Left because Trump knew he could never win the election, so a coup d'état was the only answer.
You can follow @ericgarland.
Tip: mention @twtextapp on a Twitter thread with the keyword “unroll” to get a link to it.