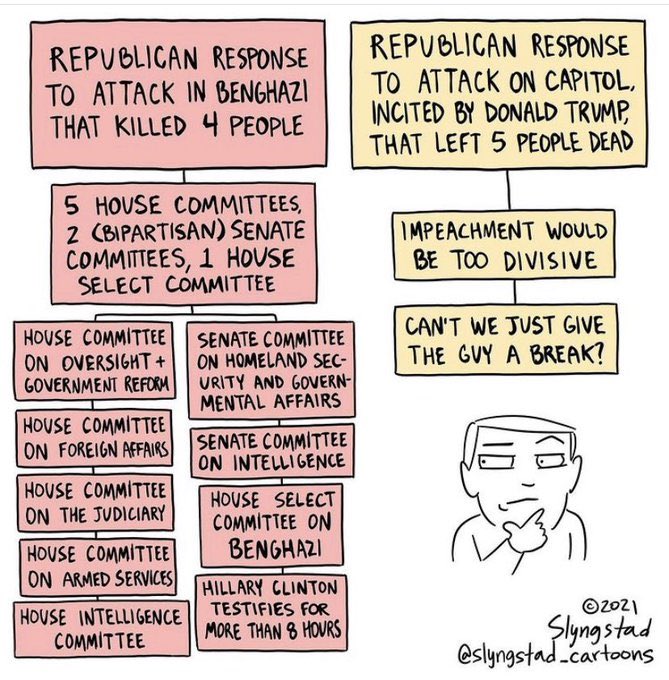 “We’ve been in denial — about far-right extremism, the GOP, and Trump — and now we’re at a crossroads… January 6 didn’t work, but among those who participated, many now see it as a trial run… The time to push back vigorously is **NOW**.” @RuthBenGhiat

"My brothers & sisters in Congress and all around our country, I am sorry. For I've never understood — REALLY UNDERSTOOD — what privilege really means. It took a violent mob of insurrectionists and lightning-bolt moment in this very room." @RepDeanPhillips
https://twitter.com/atima_omara/status/1357492584516640768
“They’re not 'The Squad.' They're Ilhan. They’re Alexandria. They're Rashida. They are PEOPLE. They are OUR COLLEAGUES… This is an AR-15 in the hands of Miss Greene. This was on Facebook just a few months ago… I have NEVER seen that before.” @StenyHoyer

https://twitter.com/ashlieatkinson/status/1357600760897228801
“Leadership is about moving forward and bringing the people with you.” @StaceyAbrams

#SquareOne @Eleven_Films @PDXEleven @TomPetty
https://twitter.com/BerniceKing/status/1356999100324077570
In this time-lapse animation, ~40% of smartphones tracked near the January 6th Trump rally “were also in and around the Capitol during the siege — a clear link between those who’d listened to the president* and his allies and then marched on the building.”
https://twitter.com/TheRickWilson/status/1358055249525829632
January 6, 2021 Trump quotes:

“Over 100 officers seriously injured: Brain injuries, head trauma, one officer lost 3 fingers, another officer because of assault on him is likely to be blind. Officer Sicknick died, blood was spilled, 2 other officers are no longer with us…” @RepJeffries
https://twitter.com/TimothyDSnyder/status/1349434229499817992
”We should not establish a precedent where every president on the way out has weeks to try to incite an armed insurrection against the Union and if it succeeds he becomes a dictator.” @RepRaskin

Acquittal means outgoing presidents can be lawless. CONVICT.
https://twitter.com/MaryLTrump/status/1358628453394886658
January 6 was so much worse than many people realize.

So @RepRaskin posed questions:
—Why did Trump not tell his supporters to stop?
—Why did he do nothing to stop the attack?
—Why did he do nothing to help?
—Why did he not condemn the attack on January 6?
https://twitter.com/MuellerSheWrote/status/1360376364575068161
“There is no question that President* Trump is practically and morally responsible for provoking the events of January 6… He did not do his job. He did not take steps so federal law could be faithfully executed and order restored.” Mitch McConnell 2/13/21
https://twitter.com/tribelaw/status/1360718143115718662
“That attack — that siege — was criminal behavior, plain and simple, and it’s behavior that we the FBI view as domestic terrorism. It’s got no place in our democracy.” FBI head Christopher Wray re: January 6

“Every chyron in this video actually appeared on Fox.” @HeatherGtv

#KnowTheirNames https://twitter.com/ifindkarma/status/1369353169675821056
“Democrats just passed the #AmericanRescuePlan… 85% of American households will receive a direct check of $1400 per person. 11 million people lifted out of poverty… The plan will reduce health insurance premiums for millions of Americans. Significantly.” https://twitter.com/JesseFFerguson/status/1369642852926562307
Attorney General Merrick Garland is at the Department of Justice.

“HR1 is sitting before the Senate. It expands voting rights, reforms campaign finance laws and limits partisan gerrymandering. It already passed the House and it deserves a vote in the Senate.” @EWarren #HR1

"The right to vote is preservative of all other rights. It is not just another issue alongside other issues. It is foundational… No Senate rule should overrule the integrity of our democracy.”
— Senator Raphael Warnock, maiden floor speech, 3/17/21

https://twitter.com/HamillHimself/status/1372037642179674115
For The People Act prevents billionaires from buying elections — and that is why it enjoys bipartisan support of 67% of American voters including 56% of Republican voters and 68% of Independent voters.

#SaveDemocracy #ForThePeopleAct #HR1 #S1 @MeidasTouch
https://twitter.com/sarahkendzior/status/1371863655319543808
“From the start it was zero threat… They went in; they shouldn’t have done it. Some of them went in and they’re hugging and kissing the police and the guards.” Donald Trump on January 6 insurrection

Do you see ‘zero threat’ in the NYT Capitol Riot video? https://twitter.com/justinbaragona/status/1375274449612771329
“The Georgia legislation is built on a lie. There was NO widespread fraud… Politicians who didn't like the outcome are not changing policies to win more votes; they're changing rules to exclude more voters.” Jen Psaki

“The system is more powerful than any individual. The system in policing is doing exactly what it’s meant to do in America. That is to keep poor people in their place… It’s a system. It’s not broken. It’s working the way it’s designed to work.” @TrevorNoah https://twitter.com/TheAmandaGorman/status/1382102568629784577
MANAFORT GAVE THE KREMLIN U.S. VOTER DATA IN 2016.

“I don’t know why folks try to come for @StaceyAbrams when they know damn well that they aren’t ready.” @HarrisonJaime

"What I object to were rules that permitted thousands of Georgia voters to be denied participation, to have their votes cast out… I will disagree with the system till it is fixed." Stacey Abrams to Ted Cruz

days of true leadership has made…

#ThankYouJoe #100DaysOfBiden @JoeBiden @CAPAction
https://twitter.com/troutgirl/status/1387430216012767232
“The number of COVID deaths in the U.S. has dropped from 4380 people on the day that President Biden took office to about 700 people a day now.” @StevenBeschloss

“I inherited a nation in crisis. The worst pandemic in a century. The worst economic crisis since Great Depression. The worst attack on our democracy since the Civil War… After just 100 days — America is on the move again. Turning peril into possibility.” https://twitter.com/potus/status/1387584072021692420
On January 20, 3 million Americans had been fully vaccinated.

100 days later, over 100 million Americans are fully vaccinated and the United States has ADDED 1.4 MILLION JOBS.

You can follow @ifindkarma.
Tip: mention @twtextapp on a Twitter thread with the keyword “unroll” to get a link to it.