Deeper dives: Google turned open web into a walled garden of tying, exclusionary tactics, and privacy fixing.
for a company who regularly dismisses the importance of its display advertising biz, it sure was willing to break a lot of antitrust laws… like the state AGs vs Facebook, I'm also thrilled here, this is the exact case I wanted against Google. As promised, Texas had the experts.
I wrote a post in May summarizing the direction expecting influence by UK and Australia competition reports along with a brilliant roadmap from @ProfFionasm @DavidDinielli. They had a list of 20 examples that I think may all be in the Texas complaint. https://digitalcontentnext.org/blog/2020/05/21/the-google-antitrust-ship-has-set-its-course/
The Google antitrust ship has set its course - Digital Content Next

It is important to understand that approximately 90% of Google’s revenue growth (3x over the last seven years) was captured on its own properties.

https://digitalcontentnext.org/blog/2020/05/21/the-google-antitrust-ship-has-set-its-course/
here is Fiona and David's full roadmap ( https://omidyar.com/wp-content/uploads/2020/09/Roadmap-for-a-Case-Against-Google.pdf). I also see the House Judiciary report and the work of @DinaSrinivasan throughout the report, too, especially as we get into discussions around market dynamics. OK, back to the report.
Like with Facebook, the lawsuit significantly includes the intersection of data and antitrust and the erosion of privacy and capturing of profits as Google achieved market power and could weaponize data. The state AGs very clearly understand Google's business model. /4

brutal. check this out. AGs calling out the lie:
"brainy Google engineers having fun at their sunny Mountain View campus while trying to make the world a better place." /5 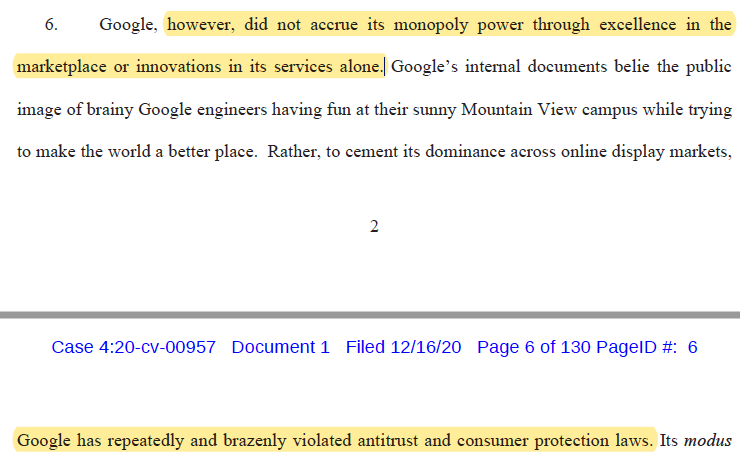 Yes, it all comes back to DoubleClick. That's where the alleged foreclosure begins... /6 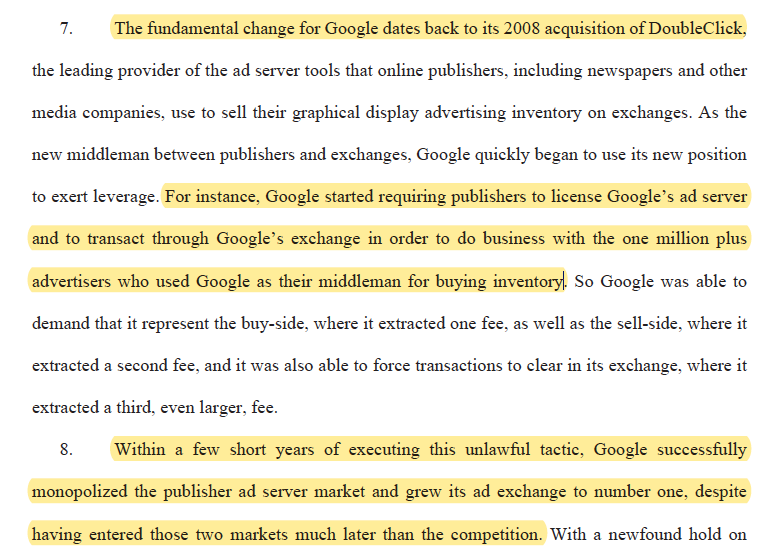 It sure was, damnit.
"[t]he lack of competition was costing pub[s] cold hard
cash.” /7

"Google’s entire business model is to collect comprehensive data about every user in the service of brokering targeted ad sales."

"In other words, Google is more concerned about bad publicity than about users’ privacy."

All sound familiar? Check these pages out. /8 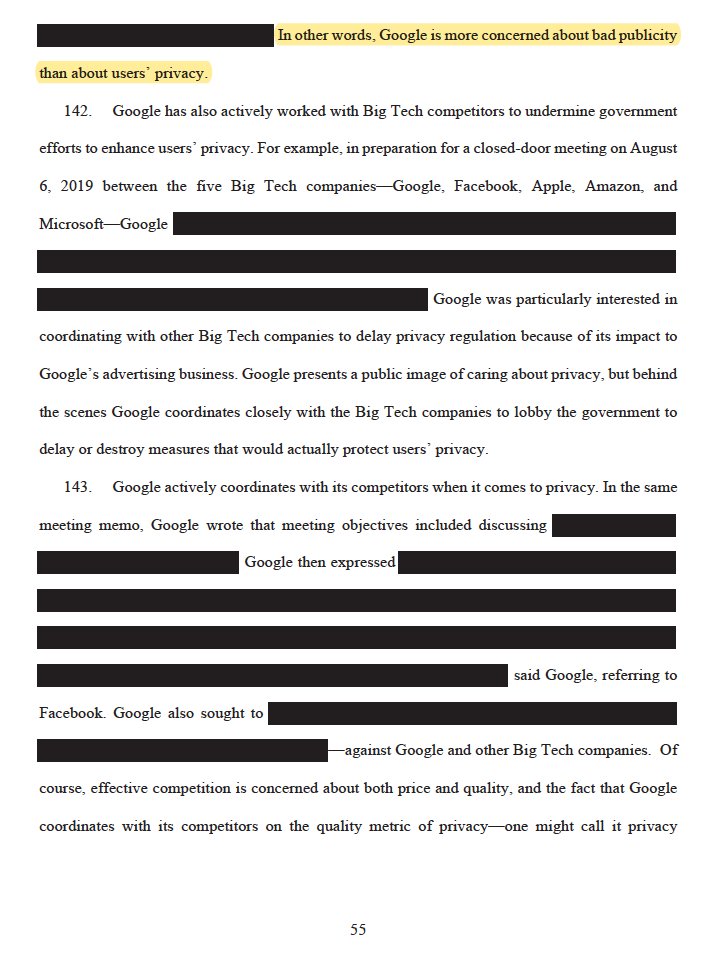 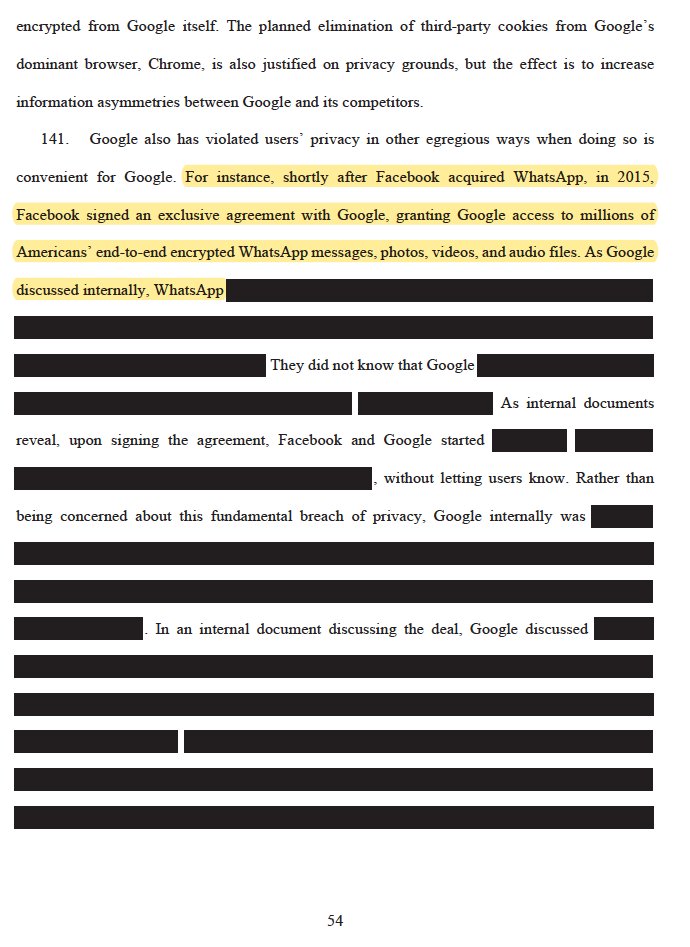 the privacy section intersection with antitrust (also seen in Facebook case) is interesting. yes, cost of bad privacy for users needs to factor in with free products. This lawsuit coins term, "privacy fixing" in describing cross-industry collusion to fight off privacy laws. /9 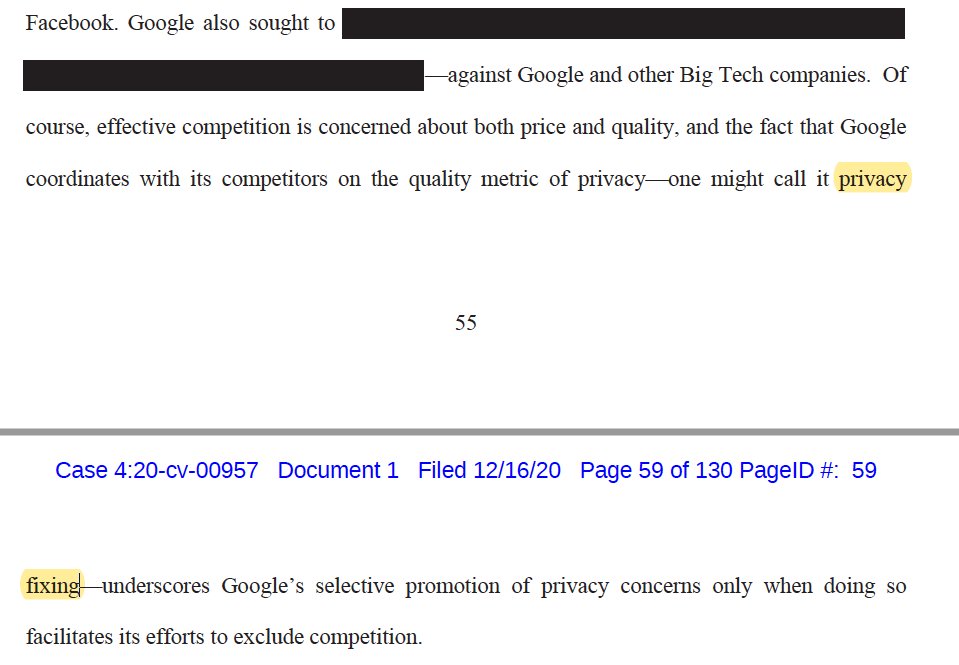 Case makes comparison between Google's stranglehold over the advertising stack and controlling all parts of the stock market describing Google sitting on the buy side and sell side and conducting the deals using a baseball analogy of being the batter, pitcher and umpire. /10
This is a smart and important description of digital advertising noting that there is the ad unit but also the data layered on top of it. This is why Google and Facebook's nefarious privacy practices are so important. They can strip-mine the data and leave the content behind. /11

This is also super important in section walking through the ad server role. We had to correct this in Google's misleading filings in Australia. Most pubs' ad revenue comes from a small % of ad impressions. Majority are commoditized/devalued by Google's scheme in the lawsuit. /12 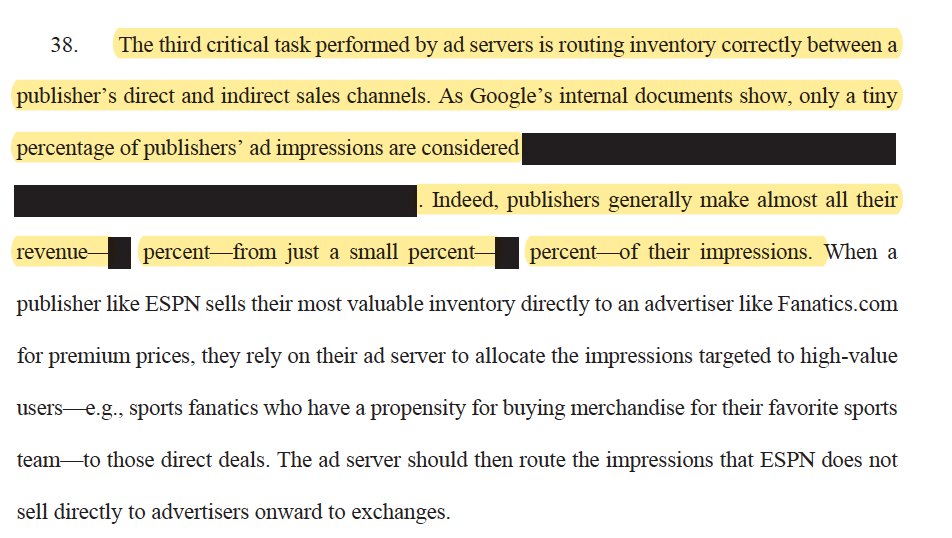 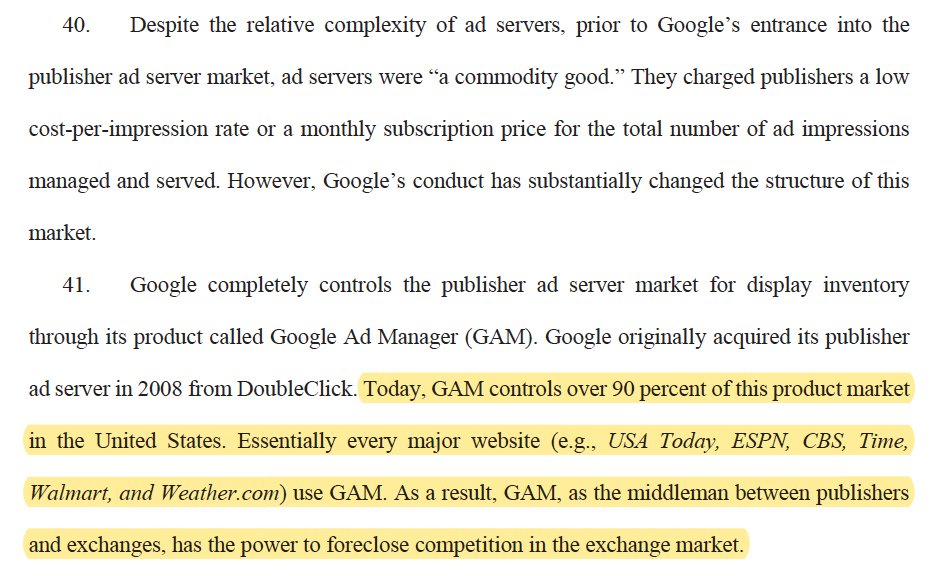 In the ad exchange market section, you get another comparison to the stock market. Except the market isn't open like NYSE. Google's market power allegedly allows it to charge double to quadruple the rates of its competitors. /14 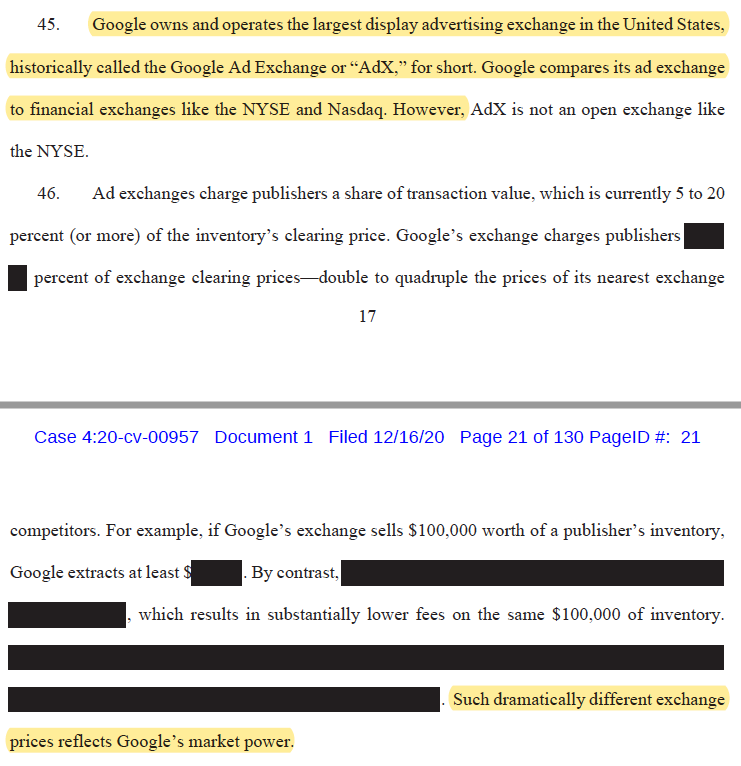 This redaction probably moved markets long-term. "Although Google executives considered ****************************** they ultimately chose instead to stack the deck in favor of Google by owning the
exchange and giving preferred access to Google’s buy-side middlemen." /15

We need to stop allowing Google (and Facebook) to claim they are friends to small businesses or local journalism. It's all one giant welfare reallocation being extracted by two dominant intermediaries of your personal data. /16 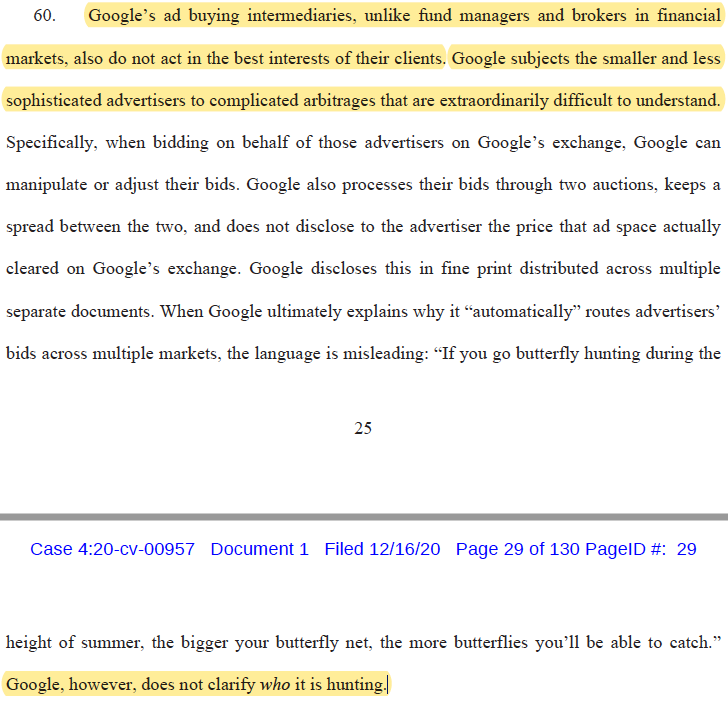 Looks like Texas has discovery showing even Google admits its monopoly in publisher ad serving. We also know from other suits they have a monopoly in search and search ads used to get the ad server monopoly. The case through the tying of each part to capture entire ad stack. /17

The complaint even rattles off example after example of Google's quality in its ad server being degraded yet not losing marketshare. Sure sign of a monopoly. Expect TX has evidence of Google using it to get favorable data terms and other biz needs. /18

After ad serving comes the ad exchange, AdX, where once again the AGs very clearly understand the business and note how once again Google hasn't lost market share as competition drops its prices... /19 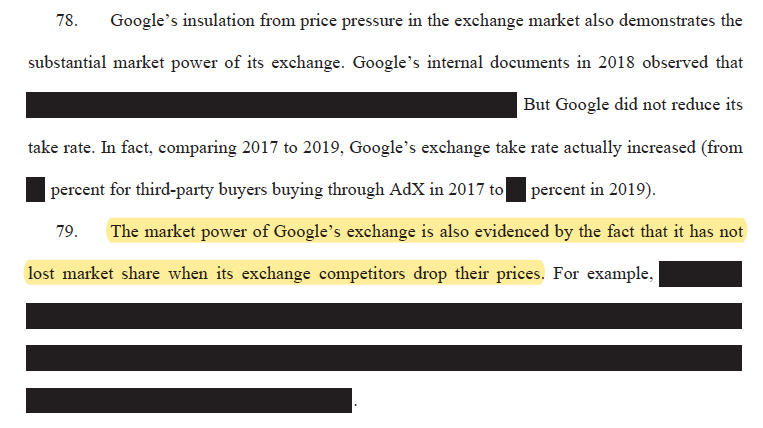 What's that? Market power in ad serving and ad exchanges isn't enough? Let me introduce you to market power in ad networks. Google has that, too, and once again Texas appears to have the evidence. /20 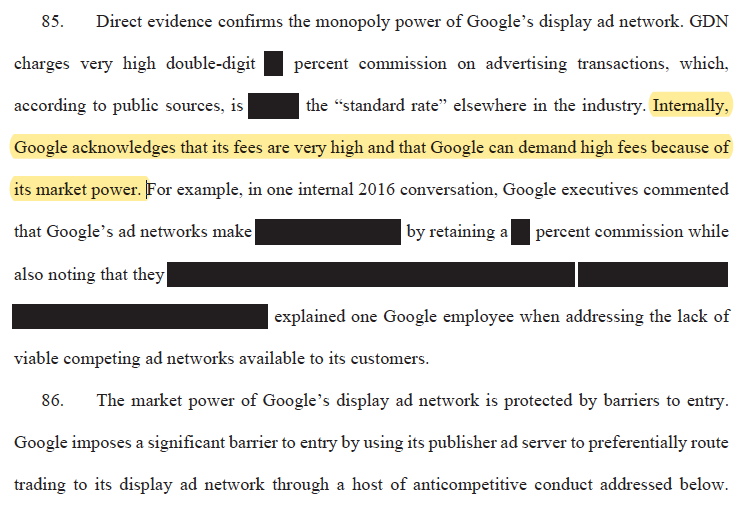 Again, small businesses buying Google ads: like with Facebook, Google isn't the friend it pretends to be. It's just so complex and they're so big they can do what they want. Hence the antitrust lawsuit to protect your interests. /21 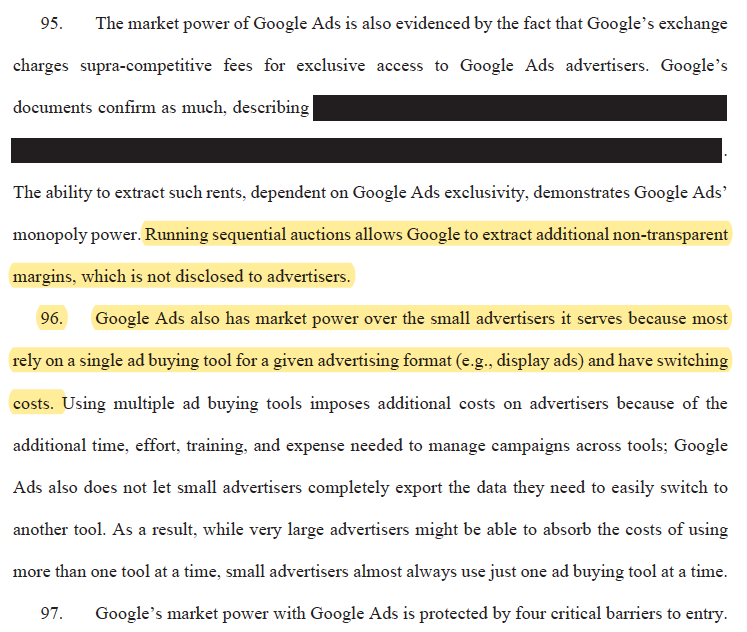 pg38-52 walk through how Google captured a dominant position throughout the ad stack. It frequently uses the term "inside information" to describe how Google could re-route the market to its own needs and benefits. I see @DinaSrinivasan research throughout this section. /22 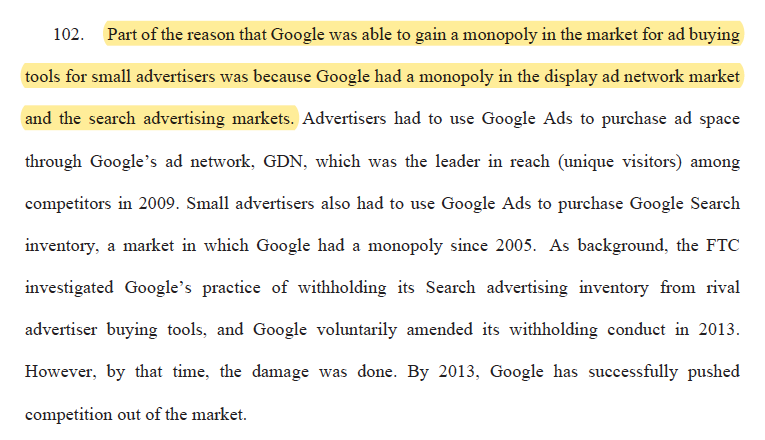 Then we get to Google's assault on header bidding. Alleging:
- G hid users from competitive exchanges
- foreclosed competition by charging pubs penalty if using
- re-routing inventory thru g exchange
- winning even over higher bids elsewhere /23 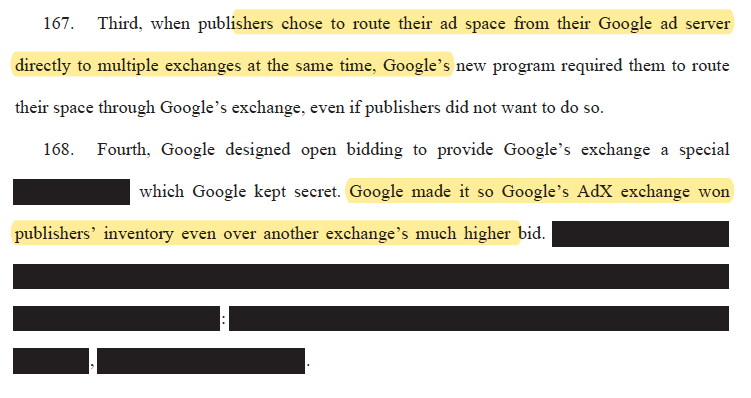 Internally, Google employees grappled with their lies while raking profits away from publishers. /24

Let's not lie in the future.

p63-73 are the alleged collusion with Facebook. Based on the allegations not redacted, the AGs (and DOJ) should have immediately deposed and demanded evidence or raided their offices. It infuriates me. I can't imagine how many journalists' jobs would be taken by the conduct. /26 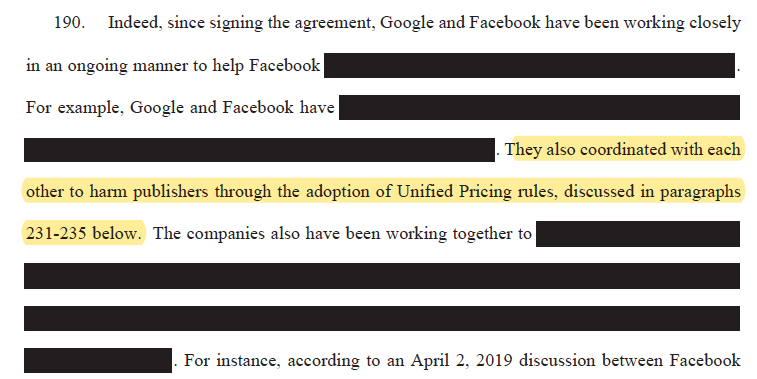 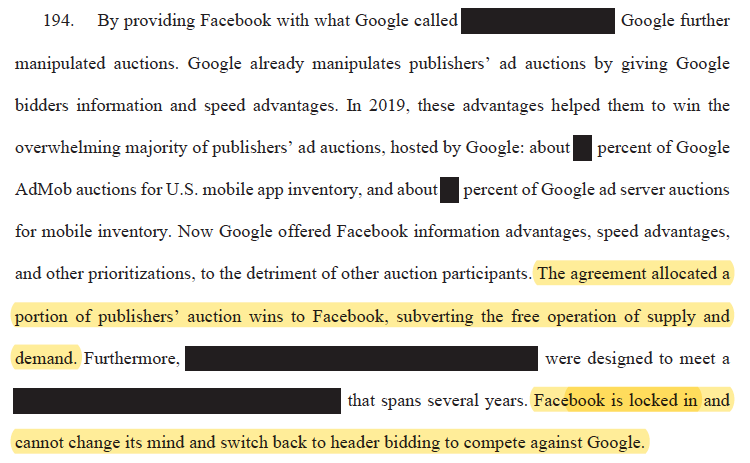 Someone should call the @IAB and ask them about this since they influence the market and these are their two largest advertising members. I don't know how any publisher can sit in the same room with Google and Facebook going forward with these unanswered allegations. /27

"Benevolent dictator for life" we flagged this early on when AMP was being proposed. One engineer was expected to be an honest broker. IIRC s/he was on the search team so of course you can trust her/him. G promised to move it to the w3c or elsewhere as soon as possible. /28 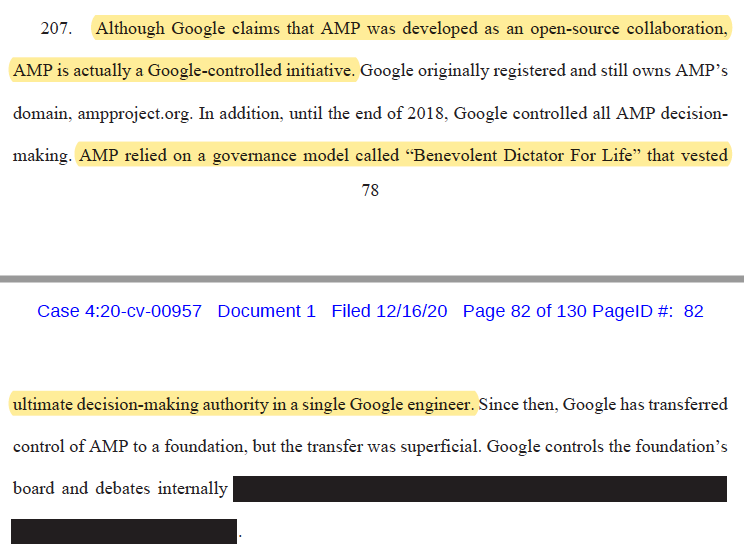 To simplify, allegation is Google basically invented AMP, a set of html code, in order to kill header bidding, control the ad stack and foreclose competition in mobile under the guise of user experience and speed driven mostly and simply by the constraints. Don't be evil. /29 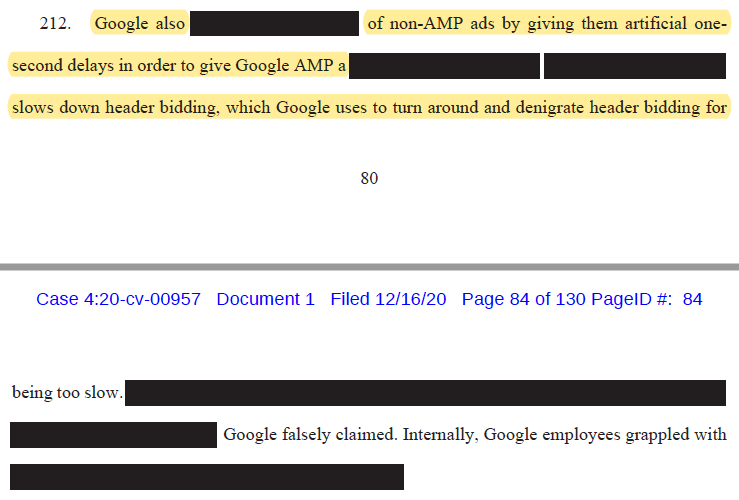 Here is more of the stock market analogy. Google allegedly controlling publishers' inventory but not acting in the seller's interest. This includes the data off the pages and it's at odds with assurances when DoubleClick was acquired. @JuliaAngwin has covered related issues. /30 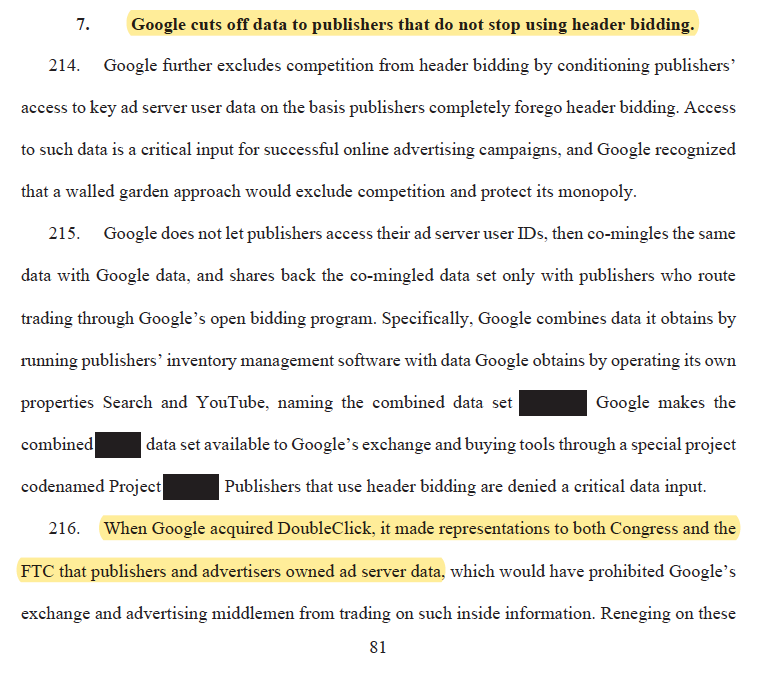 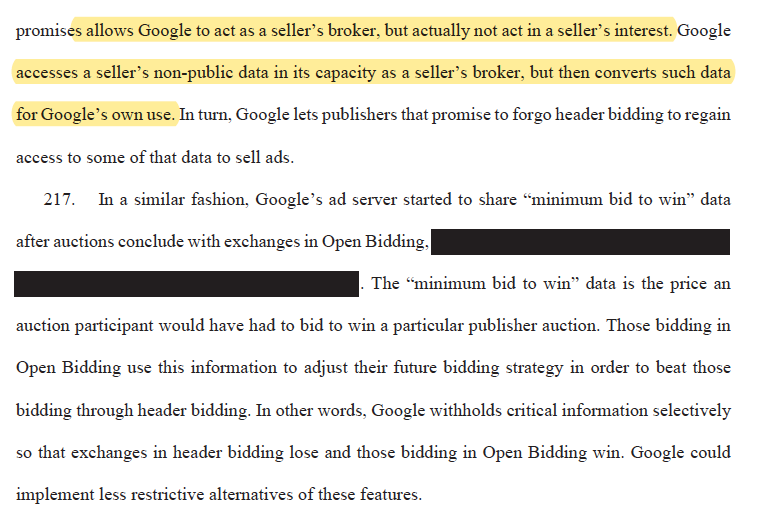 Google has put one of its least digital savvy trade bodies, CCIA, out there in front of Congress to testify under oath in this area. I would want to get my hands and take a close look at that testimony. /31 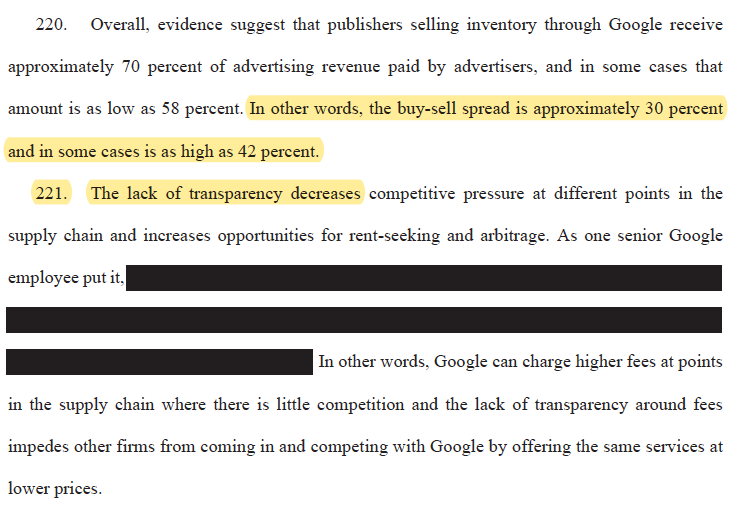 information asymmetry is a good way to foreclose competition. As we've discussed in the past, Google collects data off 75%+ of the top 1 million websites and dominates each phase of the ad stack. That's information. They also have precise location data. /32 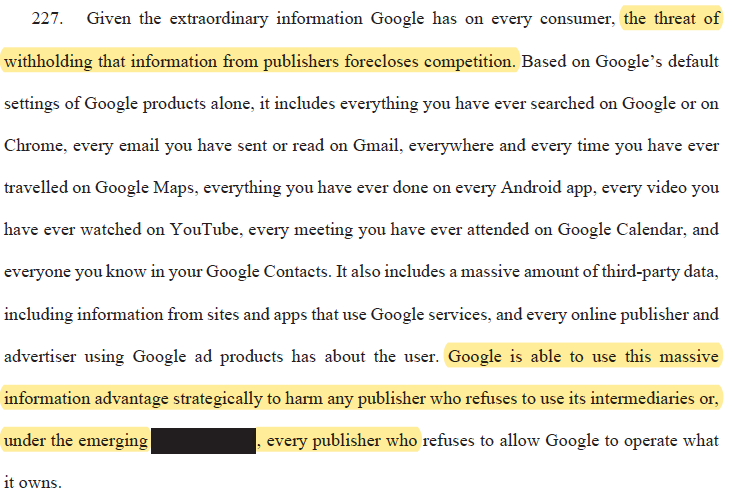 A commercial break. Here is an academic report that essentially benchmarks and lays out all of Google's access to data and how impossible it is to avoid them. It doesn't take a position, just lays out the facts. /33 https://digitalcontentnext.org/wp-content/uploads/2018/08/DCN-Google-Data-Collection-Paper.pdf
Arguably the most important words for any employee at Facebook and Google: "We'll never sell your personal information to anyone." We'll just sell access to it for $250 billion per year. /34 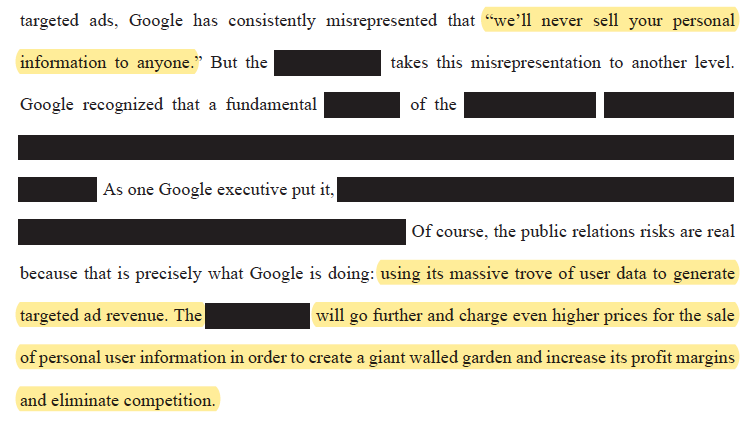 One of the better cases for tying on the ad buying side. House Judiciary (agency exec) and Senate Judiciary (AppNexus CEO) have both heard evidence under oath about Google leveraging video ads demand and YouTube in order to foreclose competition in the ad buying tools market. /35 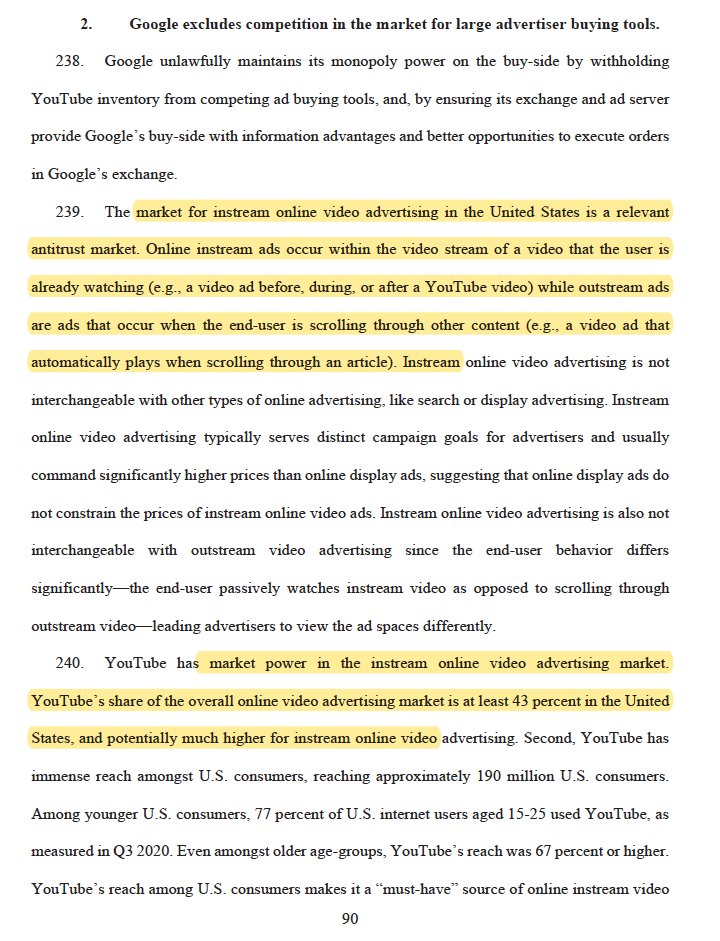 Like I said up top, Google is screwed. /36
Dropping this on the end of thread. It's one of the CIDs sent to Google by Texas. The two requests we received under FOIA were incredibly savvy / detailed and the now-filed complaint clearly is consistent output. https://twitter.com/jason_kint/status/1263151381365563395?s=20

And once again, I neglected to link to the actual complaint. Putting it here to be thorough :) https://www.texasattorneygeneral.gov/sites/default/files/images/admin/2020/Press/20201216%20COMPLAINT_REDACTED.pdf
linking to some threads of other experts in academia or involved in investigations of the issues. If you got this far, you don't want to miss their threads. Here is Lina who served on committee staff helping lead House Judiciary investigation: https://twitter.com/linamkhan/status/1339387949016887304?s=20

Here is @DinaSrinivasan who I mentioned earlier and pointed to a new report from @GiladEdelman flagging the Google and Facebook linkup could mean criminal charges. Last I checked, Facebook hasn't commented on it. https://twitter.com/DinaSrinivasan/status/1339366989333053441?s=20

another thread pointing at criminal charges. and yes, I've seen the carving up the auctions market by the intermediaries described as bid rigging previously. https://twitter.com/johnmarknewman/status/1339319510675955713?s=20

another interesting thread that may point to the allegations about the Facebook and Google "collaboration." https://twitter.com/thezedwards/status/1339324927904649216?s=20

btw, @b_fung reported last year Google was trying to get its hands on Texas docs presumably to see who was talking to AG office. I frankly think Google wanted it out there. Intimidation tactic to minimize cooperation. Facebook is doing same thing in cases. https://www.cnn.com/2019/11/18/tech/google-texas-attorney-general-antitrust/index.html
Another point here. For those who have parroted the 2018 “how do you make money?” question to Facebook as evidence govt can’t understand digital, the lawsuits filed vs G and FB plus bipartisan Congressional reports demonstrate members + staff have gotten up to speed in 3yrs.

Here is a thread to the Facebook suit demonstrating the same thing.

Since this thread is likely the most shared antitrust thread in this history of Twitter at this point, I should add here the latest scoop from @ryanjtracy @johndmckinnon https://twitter.com/jason_kint/status/1341256917763682304

You can follow @jason_kint.
Tip: mention @twtextapp on a Twitter thread with the keyword “unroll” to get a link to it.