https://www.syfy.com/syfywire/theres-a-big-black-spot-on-the-sun-today-and-scientists-predicted-it
There's a big black spot on the Sun today… and scientists predicted it

A new and respectably large sunspot has rotated into view on the face of the Sun, which would be interesting in any case since the Sun has been very quiet for years. But what makes this even more

https://www.syfy.com/syfywire/theres-a-big-black-spot-on-the-sun-today-and-scientists-predicted-it
2/ That scanned better on my head.
3/ But it's essentially true: A sunspot formed on the *far side* of the Sun, out of our view, but it affected the way sound waves travel across the Sun's surface, and scientists on Earth used that info to predict the spot's existence. And sure enough...
4/ ... a few days later it rotated into view. This pic shows the Sun with the spot indicated. The Sun spins left to right in this, so the *spot* just appeared on Monday. 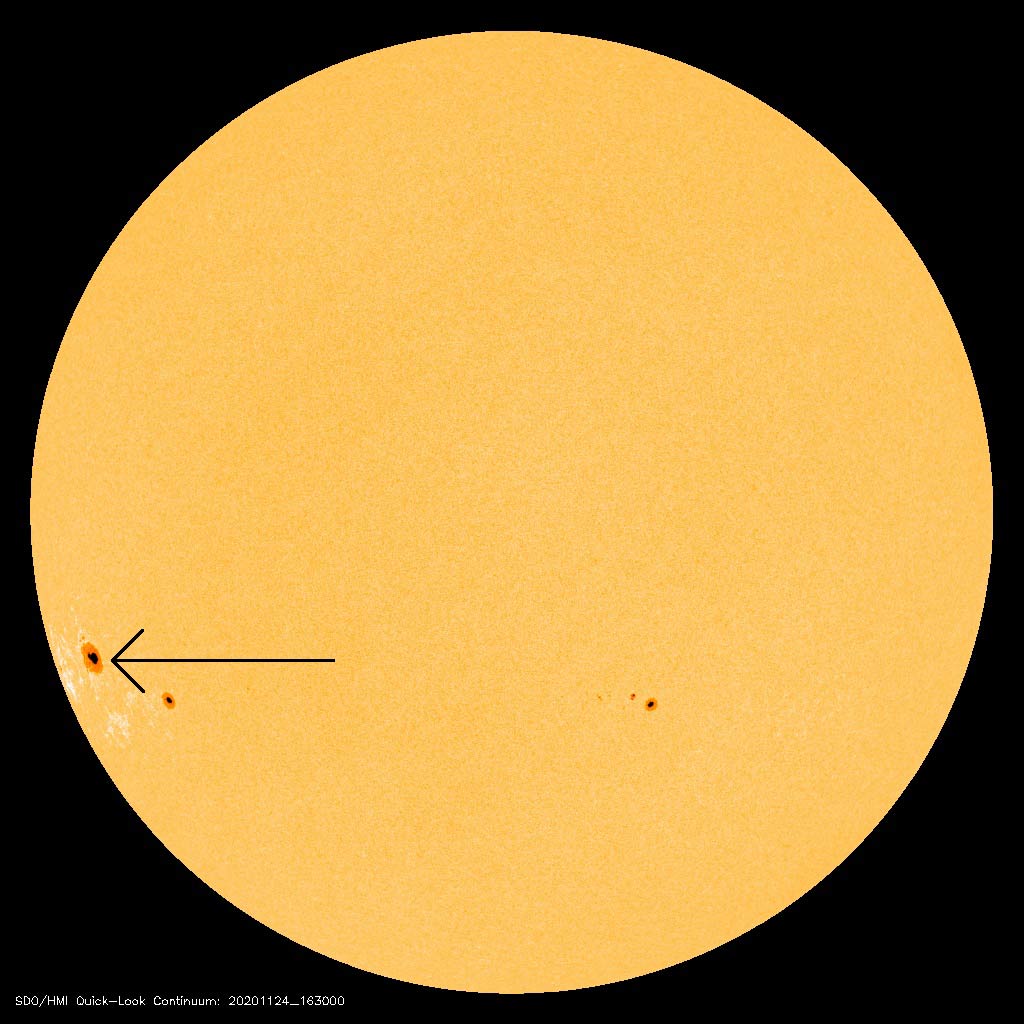 5/ Looks kinda small, right? Yeah, it's roughly 50,000 kilometers wide. The Earth could fall right into it, plunk, and not touch the sides, like a softball into a basketball basket. That shot was taken from Earth yesterday.
6/ This one is more recent, taken by the Solar Dynamics Observatoy in UV light which shows surface activity better. I threw the Earth in for scale. Mind you, this is a medium-sized spot. They can be much bigger.

You can make images like this yourself at https://www.helioviewer.org/ 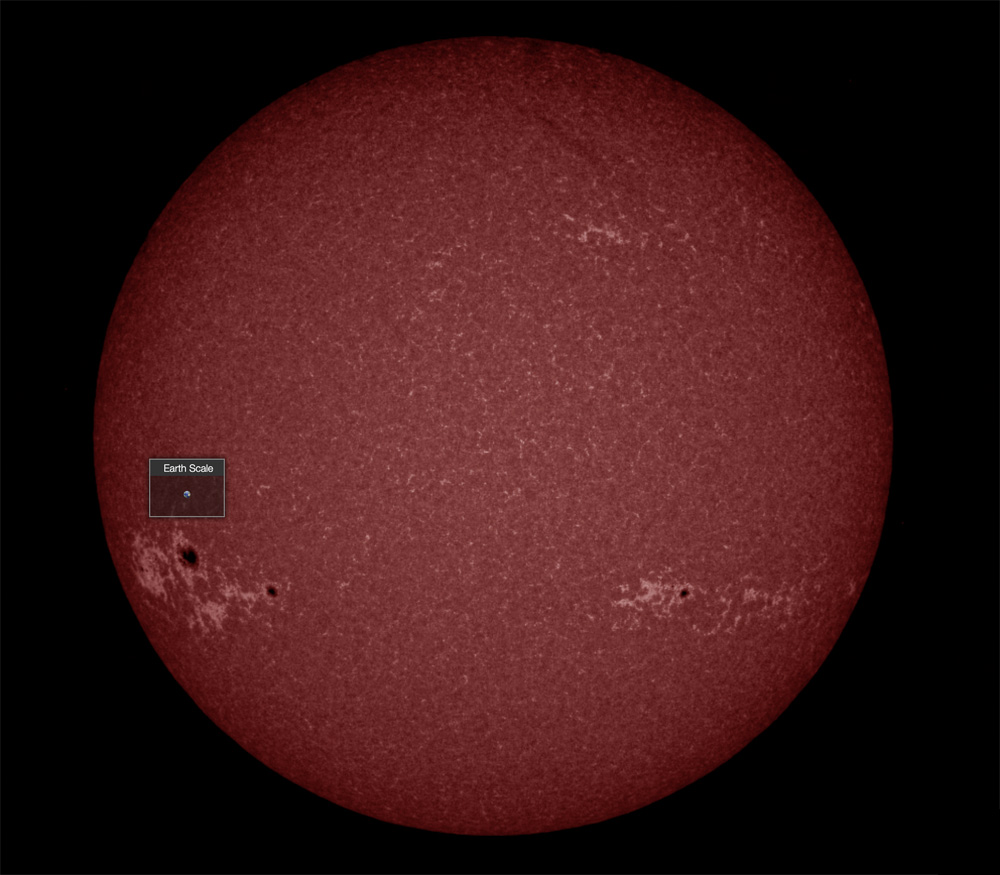 7/ Scientists have been able to predict spots on the far side of the Sun for a while now. This one is interesting because the Sun has been quiet for some time, and the spot is rather big. The signal they saw from it in their data on 14 Nov. was pretty easy to see.
8/ The Sun goes thru cycles of magnetic activity, and a new one just started late last year. Scientists think it'll be much like the last cycle (kinda small number of spots overall). I wonder how that prediction will hold up?
9/ As I note in my article linked in the OP, DO NOT LOOK AT THE SUN without protection. It's a really really bad thing to do, and only a complete chucklehead with no grasp of reality and science would try it. 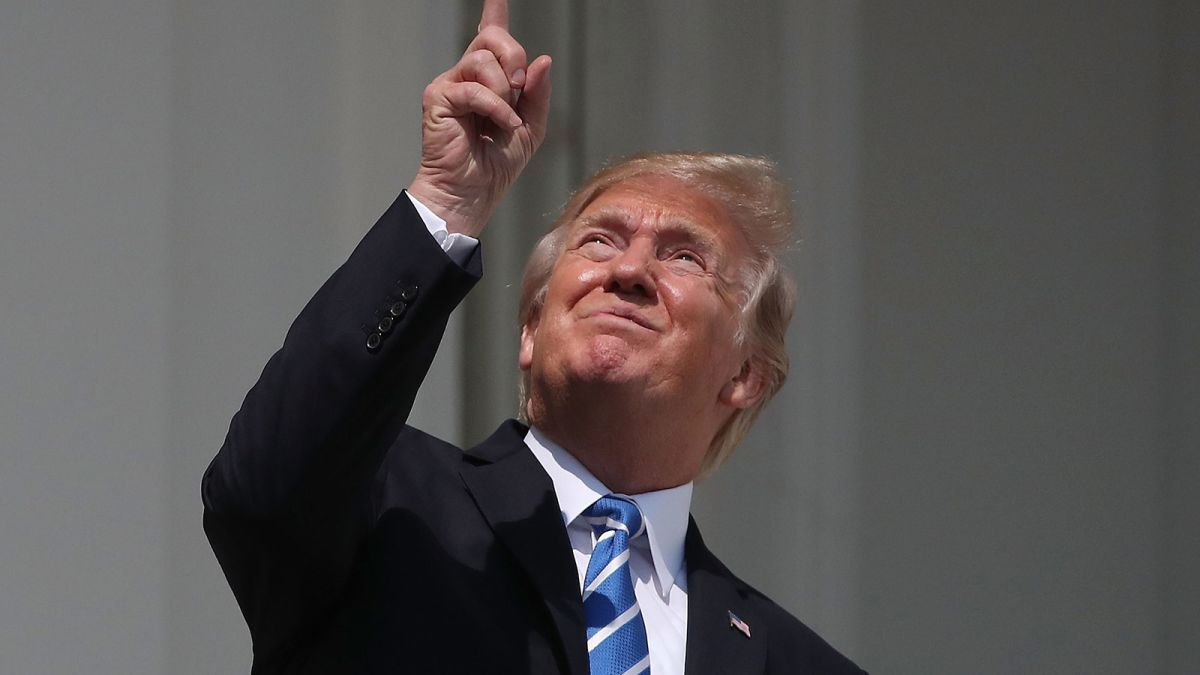 10/ I have special filtered equipment that lets me look at the Sun, so I may try a little later today once my deadlines are under control. I'll share if I do.
11/11 But it's a triumph of science that we can look at a ball of raging plasma 1.4 *million* km across and say with confidence what's going on on the other side of it.

I love this stuff. https://www.syfy.com/syfywire/theres-a-big-black-spot-on-the-sun-today-and-scientists-predicted-it
There's a big black spot on the Sun today… and scientists predicted it

A new and respectably large sunspot has rotated into view on the face of the Sun, which would be interesting in any case since the Sun has been very quiet for years. But what makes this even more

https://www.syfy.com/syfywire/theres-a-big-black-spot-on-the-sun-today-and-scientists-predicted-it
You can follow @BadAstronomer.
Tip: mention @twtextapp on a Twitter thread with the keyword “unroll” to get a link to it.