Assault weapons are a public health risk, with the capacity to do significant damage to the organs and tissues of many people in a short period of time.
RCMP union opposes Ottawa’s plan to ban certain semi-automatic rifles

https://www.theglobeandmail.com/canada/article-rcmp-union-opposes-ottawas-plan-to-ban-certain-semi-automatic-rifles/
Among the guns covered by the ban are ones used in many previous horrific mass shootings in Canada and elsewhere, including one in which 3 RCMP officers were killed and 2 injured in Moncton in 2014.
The evidence clearly supports banning access to these guns.

In Australia, in the 18 years before the Port Arthur massacre, there were 13 mass shootings. In 22 years following the passing of an assault weapons ban ('96-'18) there were 0 such incidents - https://tinyurl.com/y9m3uhv7
Gun reform affecting military guns in Switzerland has led to a reduction in suicides - https://ncbi.nlm.nih.gov/pubmed/23897090 .

Mass-shooting fatalities were also 70% less likely to occur during the period in which there was an assault weapons ban in the US, 1994-2004 - https://journals.lww.com/jtrauma/Pages/articleviewer.aspx?year=2019&issue=01000&article=00002&type=Abstract
Canada cannot ignore its made-in-Canada gun problem:

Canada ranks 5th of 23 OECD peer countries for age adjusted gun mortality; 8X the UK and Japan, about 3X Australia and the Netherlands, all countries where strict gun control legislation exists. https://jamanetwork.com/journals/jama/fullarticle/2698492
The discourse on gun violence should not be limited to policing gang crime homicide. CDPG calls for a comprehensive, public health approach to preventing all forms of gun violence, including investments in social determinants and addressing the flow of guns smuggled into Canada.
This approach recognizes additional important facts, including:

-75% of gun deaths are suicide, a majority of those are in rural communities https://www.cmaj.ca/content/192/42/E1253
- guns are the most common reported means of killing women and girls in Canada https://femicideincanada.ca/callitfemicide2019.pdf
- firearm injuries are a significant and preventable cause of death in Canadian youth https://academic.oup.com/pch/article/23/1/35/4860345
- 20% of patients with an intentional gun injury are at risk of long-term disability and 10% of patients with unintentional injury are http://cmajopen.ca/content/8/3/E469.full
Along with scientific evidence, Canadians overwhelmingly support stronger gun laws, the assault weapons ban in particular:

15 medical associations
3 national women's organizations
Federal Ombudsman for Victims of Crime
4 federal political parties
Victim groups
80% of the public
The US experience with gun violence is a cautionary tale. Yet advocates in that country have successfully pushed back on dangerous NRA rhetoric, electing @JoeBiden, who promises stronger gun laws. This will benefit Canada as easy access to guns in the US facilitates smuggling.
In Canada, opposition to the assault weapons ban is also led by an NRA-style gun lobby. This opposition has led to appalling tactics and vituperative attacks on physicians, victims, and advocates. Most reasonable Canadians reject these attacks and expect our leaders to do so too. 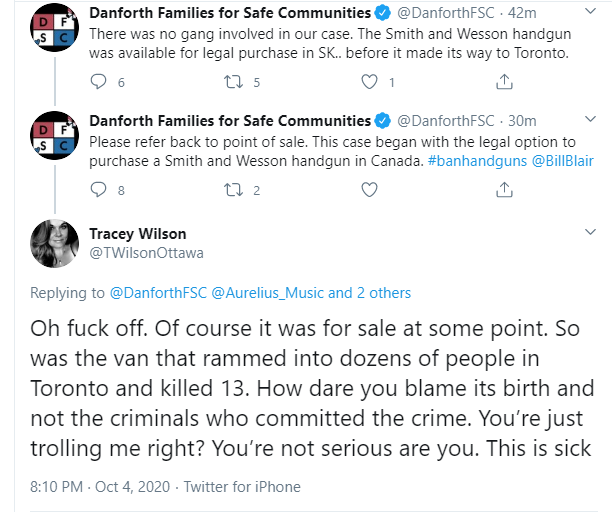 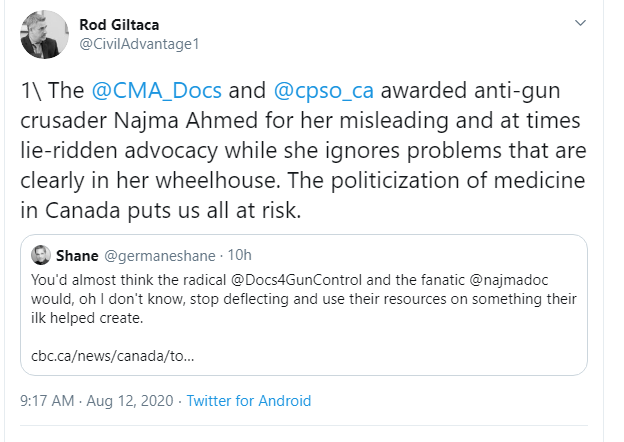 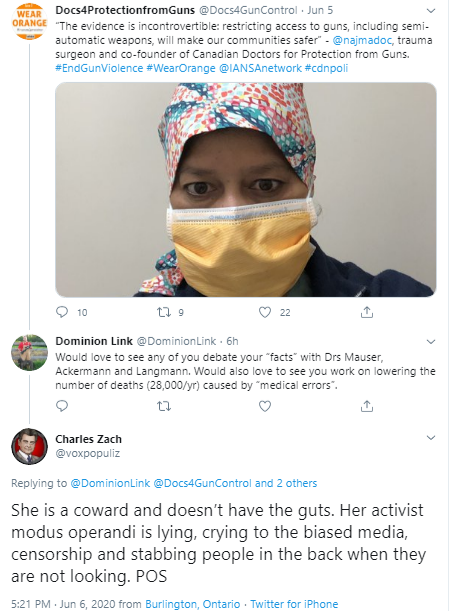 The CCFR even released a video in which it warned thousands of kids could "get shot right through the neck and killed by ERT" police officers.
CEO Rod Giltaca warned that CDPG's advocacy would be responsible. "If you’re going to advocate for it, own it". https://firearmrights.ca/en/video-gun-control-battle-with-doctors-intensifies/
All Canadians wish to prevent gun violence, and citizens and groups can agree or disagree on specific approaches. But public policies should be rooted in evidence and the discourse should be respectful. More information and sources are available at http://www.doctorsforprotectionfromguns.ca .
Finally, CDPG recently produced a video presenting a compelling case for urgently acting now to prevent gun violence. We encourage everyone to watch: #cdnpoli End of thread.
You can follow @Docs4GunControl.
Tip: mention @twtextapp on a Twitter thread with the keyword “unroll” to get a link to it.