Read on Twitter
On April 21, 2017, days after WikiLeaks founder Julian Assange was expelled from Ecuador embassy and arrested, Blinken said he would have loved to have seen Obama admin find a way to charge Assange. 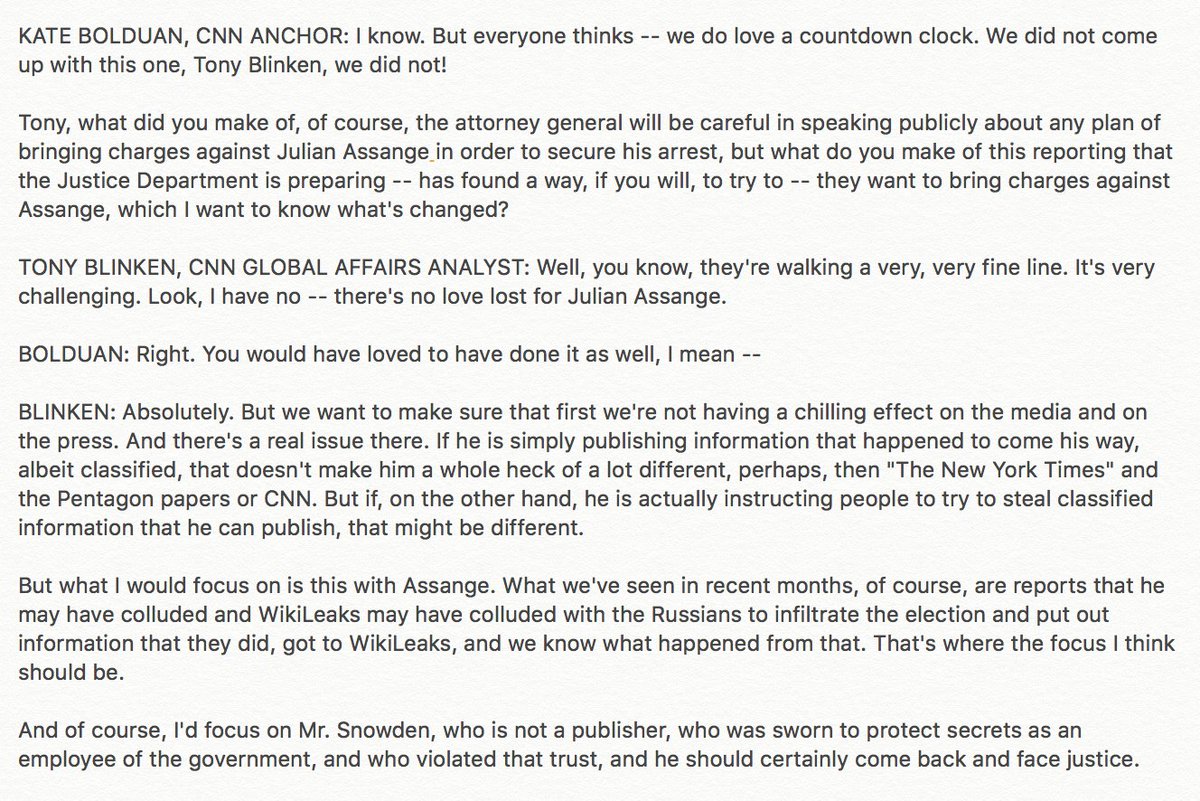 The entire exchange on Trump administration indicting Assange is rather incredible because Blinken says:

(b) He'd rather focus on prosecuting Snowden, who is not a publisher
Blinken co-founded WestExec Advisors with Michelle Flournoy, a hawk. He cashed "in on his international connections" and "years of face time with Saudi, Israeli, and Chinese leaders."

Jonathan Guyer of The American Prospect reported on this in July: https://prospect.org/world/how-biden-foreign-policy-team-got-rich/
How Biden’s Foreign-Policy Team Got Rich

Strategic consultants will define Biden’s relationship to the world.

She was principal deputy national security adviser to Obama. In 2013, she was appointed CIA deputy director. 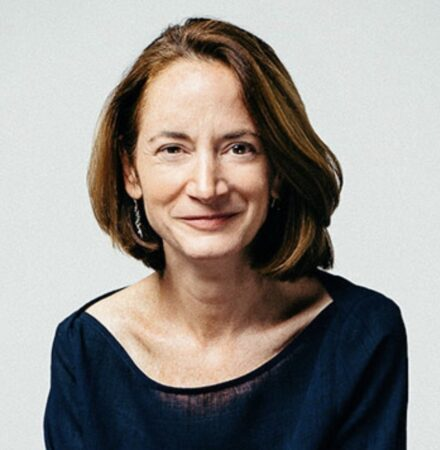 When Gina Haspel was nominated for CIA director, Haines backed Haspel, who was directly involved in the CIA's torture program and implicated in destruction of evidence of torture. https://www.thedailybeast.com/the-proxy-war-over-joe-biden-adviser-avril-haines
The Proxy War Over a Top Biden Adviser

Deputy CIA Director Avril Haines restricted drone strikes and helped thousands of refugees, but enraged the left over torture. What does her rise mean for a Biden presidency?

https://www.thedailybeast.com/the-proxy-war-over-joe-biden-adviser-avril-haines
Haines is celebrated for taking interest in international law and advocating for changes to how Obama administration authorized drone strikes.

She played a role in giving Obama's assassination policy a shinier veneer of legality that could further entrench this killing in govt.
Haines worked under former CIA director John Brennan and is a Brennan loyalist, who came to his defense (along with several other former security officials) after Trump revoked Brennan's security clearances. https://www.politico.com/f/?id=00000165-472c-d4e8-ade7-7fbce0330002
Haines was part of Palantir, a data mining company which was born out of the CIA and has been implicated in numerous human rights abuses.

The Intercept noted in June that the Biden campaign scrubbed this part of her record from their website: https://theintercept.com/2020/06/26/biden-adviser-avril-haines-palantir/
Controversial Data-Mining Firm Palantir Vanishes From Biden Adviser’s Biography After She Joins...

Within a few days of joining the Biden campaign, the biography of former top intelligence official Avril Haines no longer listed her work for Palantir.

https://theintercept.com/2020/06/26/biden-adviser-avril-haines-palantir/
Haines is on board of directors for Center for a New American Security (CNAS), which is funded by weapons manufacturers (Northrop Grumman, Lockheed Martin, Raytheon), big banks (JP Morgan Chase, Bank of America), and fossil fuel corporations (BP America, Chevron).
Oh, and this war industry-funded think tank is also funded by Palantir, the US National Intelligence Council, and the Office of Director of National Intelligence (ODNI). 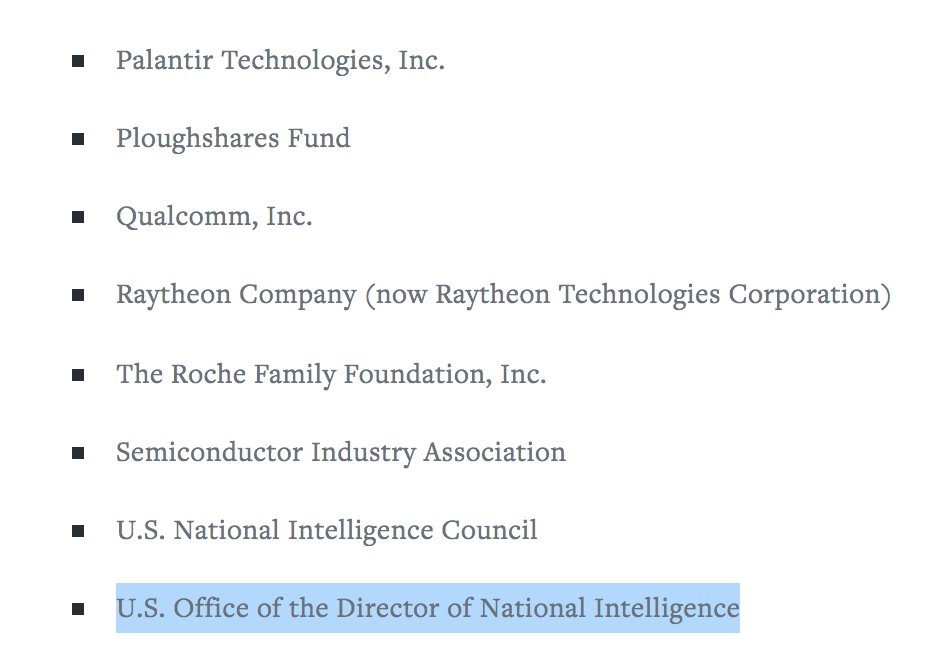 Sullivan was a senior policy adviser for Hillary Clinton's 2016 and 2008 presidential campaigns.

He was also a national security adviser to Vice President Joe Biden. 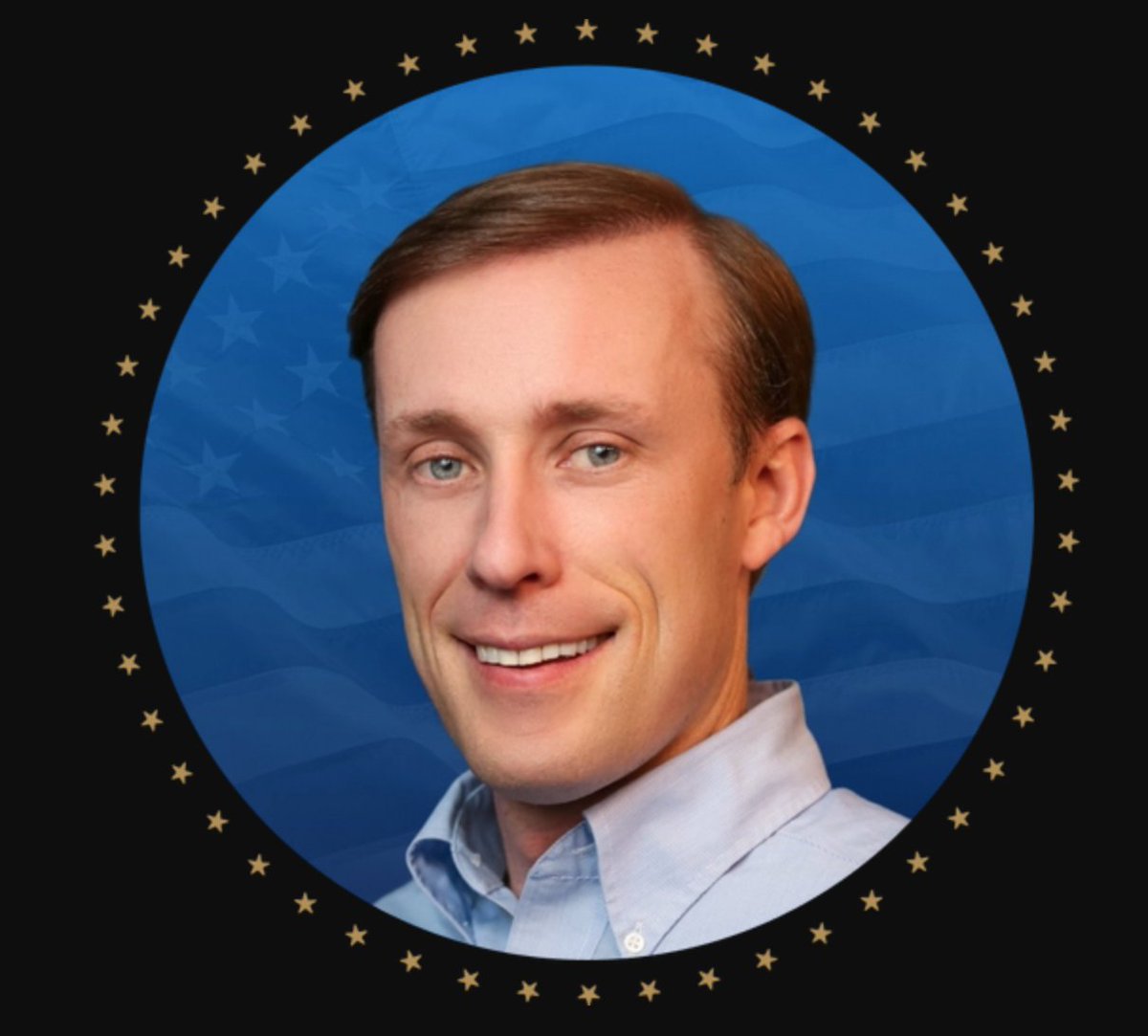 https://securingdemocracy.gmfus.org/about-us/advisory-council/
The Alliance for Securing Democracy developed a "disinformation" tracker called Hamilton 68 that they claimed could identify Russian influence operations. It misidentified real people as Russian bots - even singling out Stars and Stripes newspaper. https://twitter.com/MaxBlumenthal/status/914623741811937281

The "Podesta emails" published by WikiLeaks showed Jake Sullivan did not believe the Trans-Pacific Partnership had to have any particular environmental protections for Hillary Clinton to support the TPP. https://shadowproof.com/2016/10/12/campaign-ever-launched-clinton-planned-support-tpp-elected/
Before Campaign Ever Launched, Clinton Planned To Support TPP If Elected

Hillary Clinton's presidential campaign staff carefully tailored her remarks on TPP so she could eventually support it if elected president.

https://shadowproof.com/2016/10/12/campaign-ever-launched-clinton-planned-support-tpp-elected/
On April 13, 2017, after Trump launched 59 missiles against a Syrian air base in response to an alleged chemical attack, Sullivan cheered the strike during an appearance on CNN.

The retaliation was never legally justified.

He also criticized Congress for "dragging" their feet on authorization for strikes in Syria.

Trump authorized the US Air Force to drop the "mother of all bombs" on an ISIS stronghold. This scorched earth attack resulted in the spread of disease, and it ruined the ability of nearby Afghans to grow crops. https://tolonews.com/afghanistan/%E2%80%9Cmother-all-bombs%E2%80%9D-caused-illness-ruined-farmland-residents
“Mother of All Bombs” Caused Illness, Ruined Farmland: Residents

Almost two and a half years after the United States dropped the “mother of all bombs” onto a Daesh hideout in eastern Afghanistan, locals say they have been afflicted by “many diseases” and

https://tolonews.com/afghanistan/%E2%80%9Cmother-all-bombs%E2%80%9D-caused-illness-ruined-farmland-residents
During the same CNN appearance in 2017, Sullivan said Trump appeared to have used the "Mother of All Bombs" appropriately.

"In principle, using this weapon for this kind of purpose is an appropriate step for the military to take."
Also from this CNN appearance in 2017—Sullivan backed then-CIA director Mike Pompeo's evidence-free claim that WikiLeaks is a “non-state hostile intelligence service often abetted by state actors like Russia.”

And urged Trump to "reinforce" what Pompeo said. 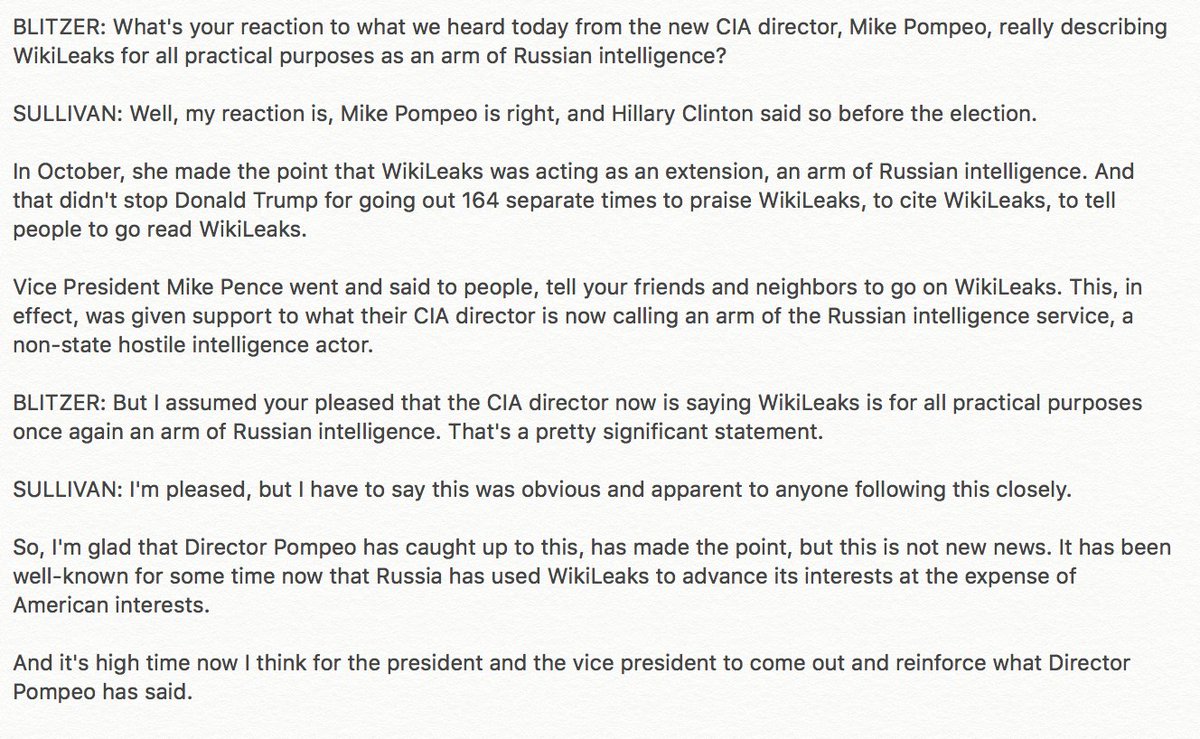 In same speech, Pompeo said Assange had “no First Amendment freedoms” because “he is not a U.S. citizen."

“We’ve had administrations before that have been squeamish about going after these folks under some concept of this right-to-publish," Pompeo added.
Much like Pompeo, Jake Sullivan is rather biased because WikiLeaks exposed emails he sent during Hillary Clinton's failed 2020 presidential campaign. That exposed him to unwanted scrutiny over matters that were of public interest.
Alejandro Mayorkas is Biden's pick for secretary of Homeland Security.

In the Obama administration, he was deputy secretary of homeland security and director of US Citizenship and Immigration Services (USCIS). 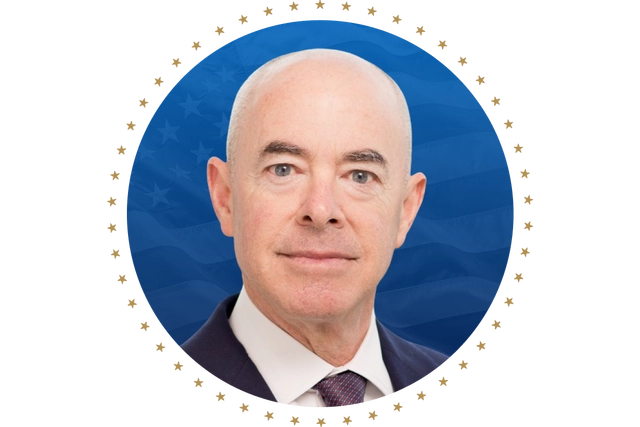 As American Immigration Council documented, DHS "increased detention of women and children awaiting their asylum hearings, rather than release [them] on bond." https://www.americanimmigrationcouncil.org/research/understanding-central-american-refugee-crisis
Understanding the Central American Refugee Crisis

The unprecedented levels of crime and violence that have overwhelmed the Northern Triangle countries in recent years have produced a refugee situation for those directly in the line of fire, making...

https://www.americanimmigrationcouncil.org/research/understanding-central-american-refugee-crisis
The Obama administration, according to American Immigration Council, backed several policies intended to "send a message" to "Central Americans that the trip to the United States was not worth the risk, and they would be better off staying put."
Like Mayorkas declared in June 2014, "We are surging resources to increase our capacity to detain individuals and adults with children, and to handle immigration court hearings."

DHS engaged in "expedited removal," or deportations, of asylum-seekers. https://obamawhitehouse.archives.gov/the-press-office/2014/06/20/press-call-efforts-enhance-enforcement-southwest-border
Press Call on Efforts to Enhance Enforcement on the Southwest Border

https://obamawhitehouse.archives.gov/the-press-office/2014/06/20/press-call-efforts-enhance-enforcement-southwest-border
Immigrant rights groups wrote a letter to Mayorkas and DHS Secretary Jeh Johnson in February 2016 that urged them to end family detention and halt fast-track processes that deprived asylum seekers of due process rights.
https://www.lawg.org/wp-content/uploads/storage/documents/JohnsonMayorkas_letter_final_signed_2232016.pdf

Mayorkas was director of U.S. Citizenship and Immigration Services (USCIS) from 2009-2013, and as documented by ACLU, USCIS oversaw blacklist of Arabs, Middle Easterners, Muslims, and South Asians who may apply for citizenship.
https://www.aclusocal.org/sites/default/files/carrp-muslims-need-not-apply-aclu-socal-report.pdf 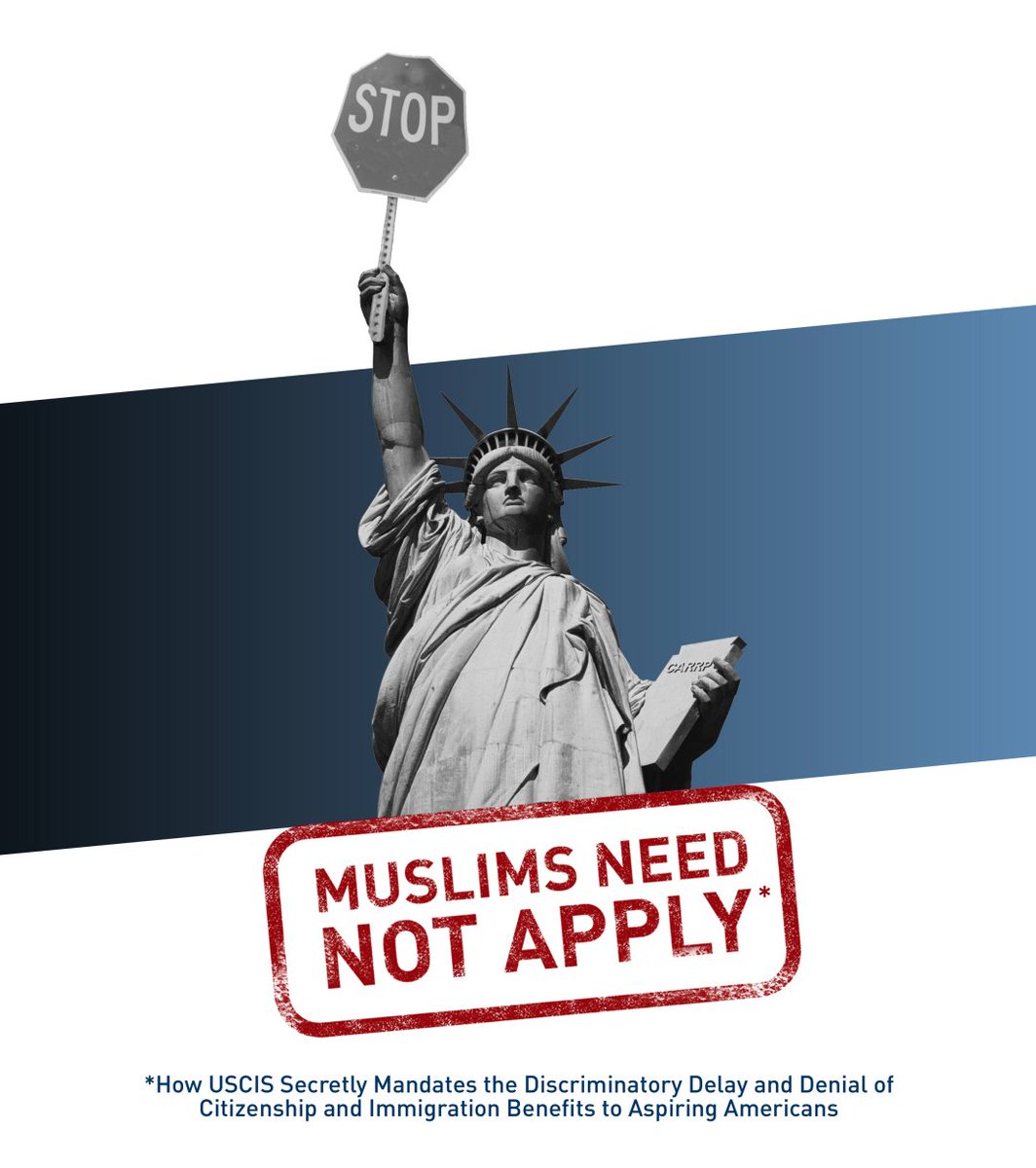 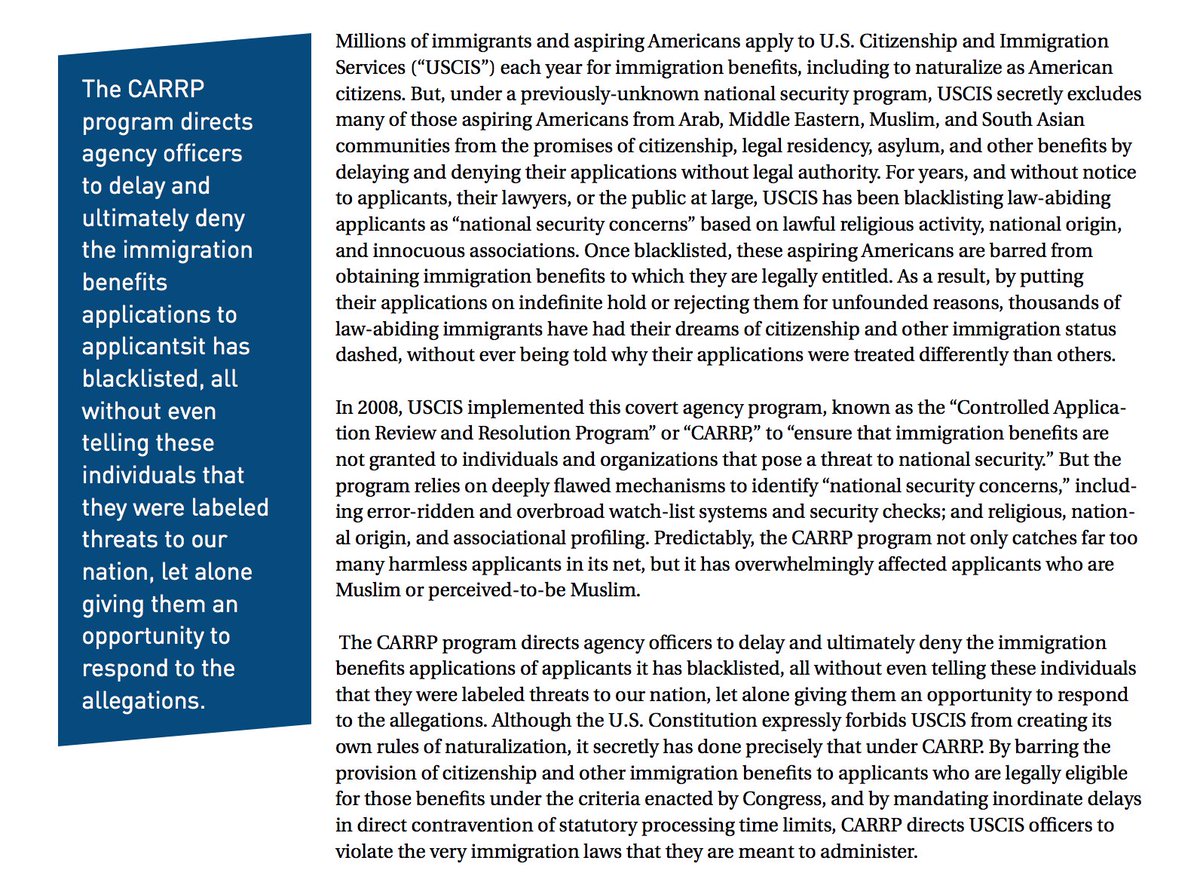 As ACLU and other groups described in 2013, "USCIS has been blacklisting law-abiding applicants [due to] 'national security concerns' based on lawful religious activity, national origin, and innocuous associations."
CORRECTION: This quote is from April 2017, not April 2019. So that means Assange was still in the Ecuador embassy and had not been arrested. Blinken was responding to reports that Trump's Justice Department had found a way to charge Assange. https://twitter.com/kgosztola/status/1331067888288010242?s=20

Kerry, former secretary of state under Obama, is known as "architect" of Paris climate agreement. 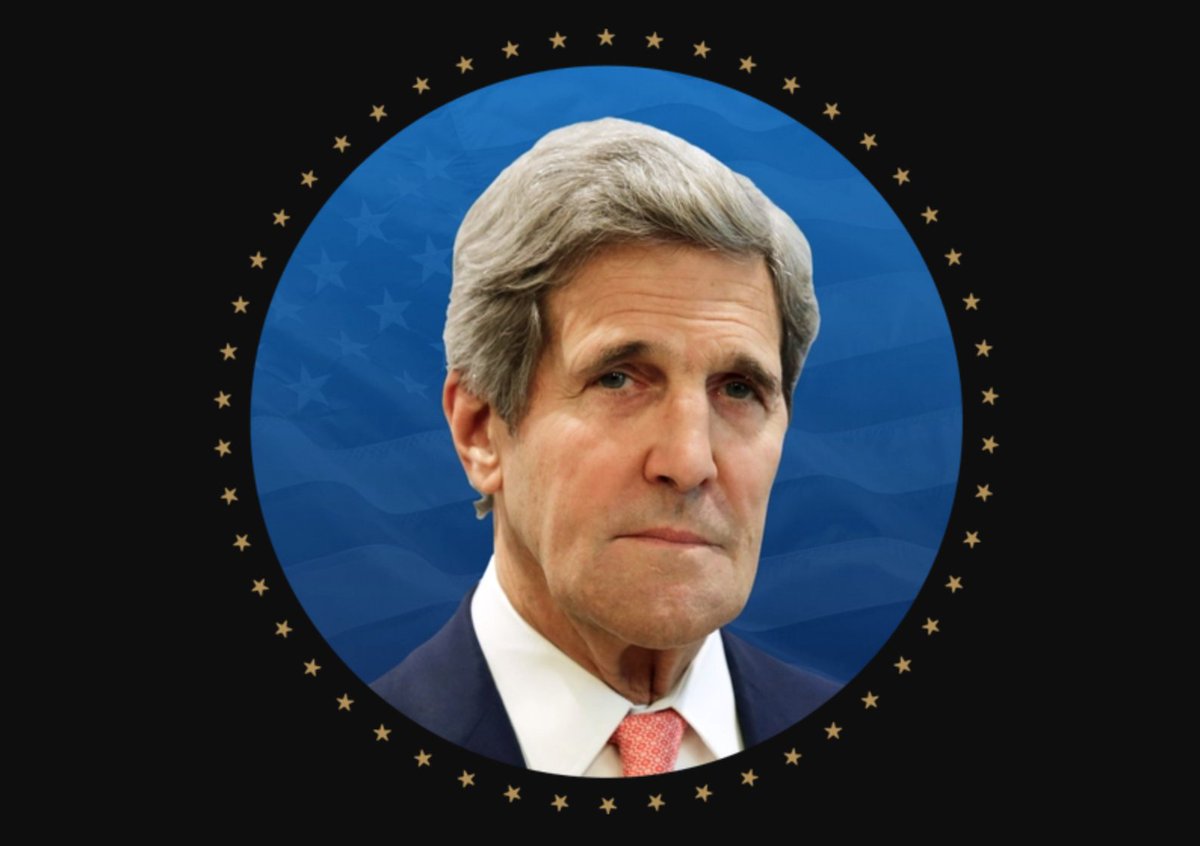 The UN's Intergovernmental Panel on Climate Change warned pledges put us on path to "world that would have devastating impacts on food and water security, human health, displacement of people, & loss of biodiversity and degradation of ecosystem services." https://insideclimatenews.org/news/07112019/paris-climate-agreement-pledges-lack-urgency-ipcc-timeline-warning
The Paris Climate Problem: A Dangerous Lack of Urgency

Most countries aren’t cutting emissions fast enough, and their pledges for the next 10 years fall far short of what's needed, a new analysis warns.

https://insideclimatenews.org/news/07112019/paris-climate-agreement-pledges-lack-urgency-ipcc-timeline-warning
Kerry is a believer in carbon pricing, a "market solution" to climate disruption that is favored by neoliberals.

He is an adviser to a fund on the New York Stock Exchange launched by Climate Finance Partners, to "innovate" so-called carbon markets. 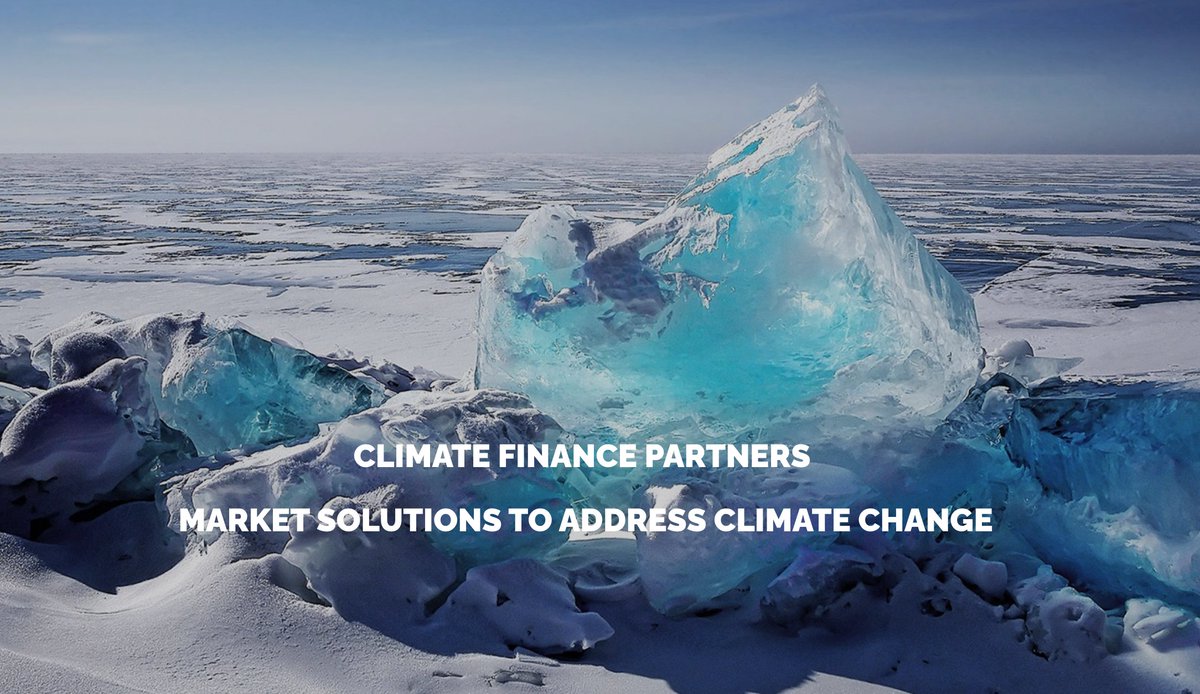 In September, Kerry declared, "The next Bill Gates, the next Sergey Brin, the next Elon Musk—there are plenty of people out there pushing curve on hydrogen fuel, pushing curve on turbines and wind, pushing curve on even better, cheaper solar panels." https://www.bostonglobe.com/2020/09/20/business/john-kerry-takes-climate-change-fight-wall-street/
John Kerry takes the climate change fight to Wall Street - The Boston Globe

The former Massachusetts senator and US secretary of state has become an investor in and adviser to a fund launched on the New York Stock Exchange that is attempting to set a global price for carbon...

As this paper from National Academy of Sciences clearly outlines, the climate emergency is a result of systemic problems that markets will not solve. https://www.pnas.org/content/117/16/8664
Opinion: Why carbon pricing is not sufficient to mitigate climate change—and how “sustainability...

Carbon pricing is often presented as the primary policy approach to address climate change. We challenge this position and offer “sustainability transition policy” (STP) as an alternative. Carbon...

https://www.pnas.org/content/117/16/8664
In 2019, during interview for HEATED, Kerry maintained polarization is the problem and corporations that push for natural gas to be a "bridge fuel" for a "longer period" are actually meaningfully contributing to "healthy debate." 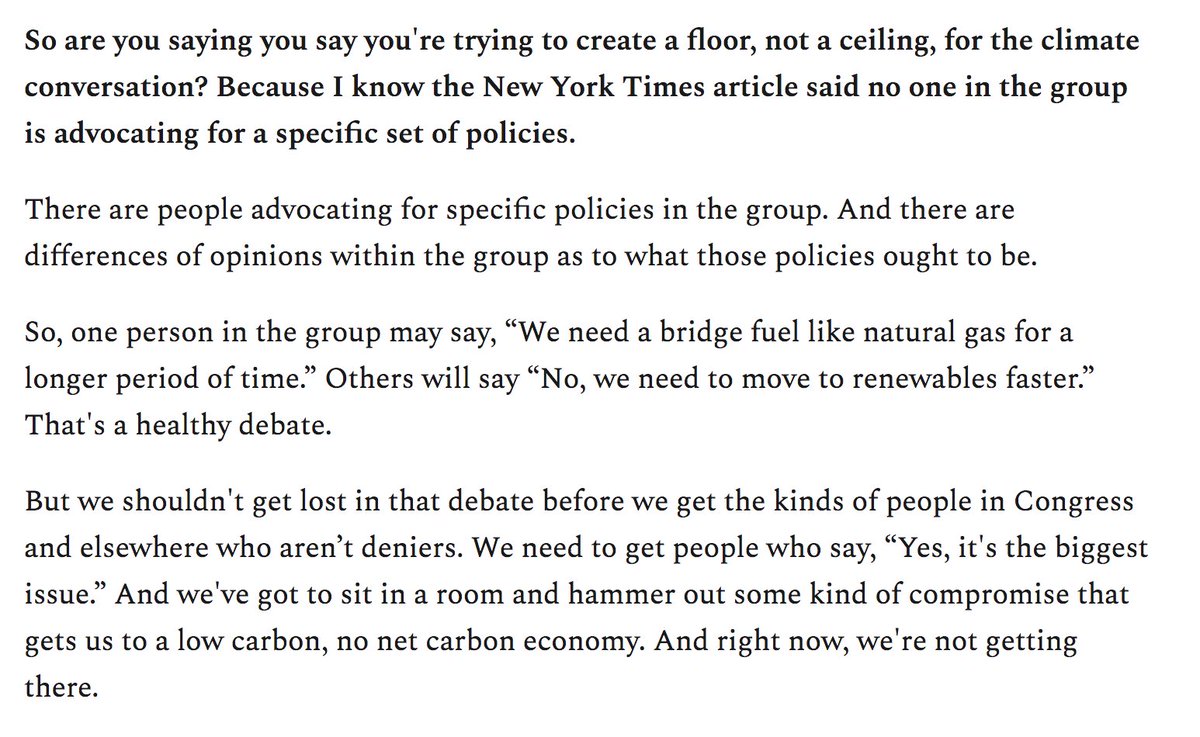 It grew out of American Security Project, which promotes fantasy of fusion energy. https://theconversation.com/conservative-nuclear-fusion-by-2040-pledge-is-fantasy-their-record-on-climate-change-is-too-little-too-late-124404
Conservative 'nuclear fusion by 2040' pledge is fantasy – their record on climate change is too...

Nuclear fusion may power post-carbon societies – but it won't save us from climate change.

https://theconversation.com/conservative-nuclear-fusion-by-2040-pledge-is-fantasy-their-record-on-climate-change-is-too-little-too-late-124404
You can follow @kgosztola.
Tip: mention @twtextapp on a Twitter thread with the keyword “unroll” to get a link to it.