Read on Twitter
1) The fighting in Nagorno-Karabakh between Armenia and Azerbaijan ended 2 weeks ago with a ceasefire mediated by Russia. You can revisit this thread for some background info on the history of the conflict.

2) There is no doubt of the outcome: Azerbaijan can claim victory.

Here's a simple map showing the before/after of the conflict.

3) A more detailed map, illustrating regions that Armenia is vacating to Azerbaijan.

The main Azeri advance came in from the south; the Kalbajar and Lachin regions were still controlled by Armenia but vacated as part of the peace deal. 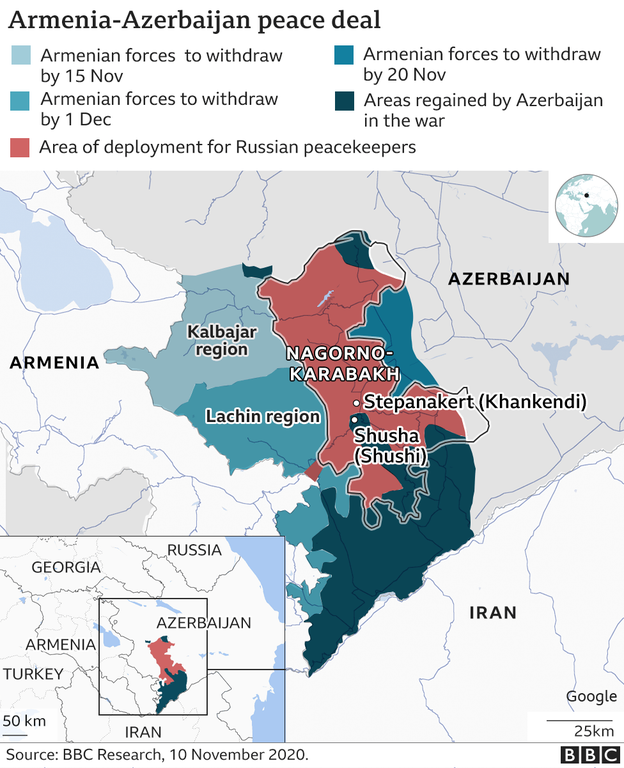 4) As part of the truce, Russia agreed to send a couple thousands peacekeepers to the region to ensure the ceasefire would hold. @RALee85 has a great thread (2300+ tweets) of the whole conflict that includes many, many photos of Russian armored vehicles and soldiers there now.
5) Most of these regions ceded in the fighting are historically Azeri. They were scarcely populated by Armenians before the conflict, but controlled after the first Karabakh war in the 90s.
You can follow @BW_Jones.
Tip: mention @twtextapp on a Twitter thread with the keyword “unroll” to get a link to it.