You see, the question for the GOP is who controls the voters. A few decades ago, the GOP made the mistake of outsourcing voter mobilization. They teamed up with FOX and the NRA, who got the voters to the polls. So FOX and the NRA control the voters, which gives them power. . .
. . . over the voters. (That insight on GOP voter mobilization is from Yale political scientist @Jacob_S_Hacker and Berkeley political scientist Paul Pierson.

This gives FOX power over candidates, which as forced candidates to adopt more extreme positions. 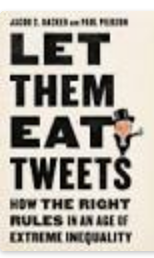 . . . Trump is trying to wrest that control from FOX, which would give him power over GOP candidates.

Some of you are reading Tweet #1 as hopeful and optimistic. Option #1 going forward is destructive to democracy and the real danger we face: The rise of disinformation.
This depends on what you mean by the Trumps "going down."

Criminal convictions won't cause the Trumps to lose their power over the right-wing. The right-wing celebrates lawbreaking. Convictions become a badge of honor. Look at Flynn and Rittenhouse. https://twitter.com/ForRealFormica/status/1330885030613282817

What can possibly cause the Trumps to "go down" is for them to be perceived as losers and weak.

That can do it.

The idea that a criminal conviction will take away Trump's power among the QAnon or Oann people is held by those who don't understand the fascist mind.
The kind of prosecutions that I believe CAN bring down the Trumps are prosecutions that show they are actually flat broke, that they really weren't that good at cheating and lying and they're worth nothing.

This is why Trump can't admit he lost. He can't be a "loser."
They love being victims. https://twitter.com/snoqualmieCarl/status/1330887954705760257
White supremacy is victimhood: "others are taking what rightfully belongs to us and we have to stop them."

Hierarchical people think that those trying to achieve "equality" are really trying to take their place at the top.

This is a good question and gets to the truth about "law and order," which was never really about law and order, and always about keeping Black people in their place.

I recently wrote a book about Thurgood Marshall. Southern police were the worst. https://twitter.com/ecarsonvacation/status/1330889258673057794

Unfortunately, I think it's more likely that the right-wing ends up pulling together, which is why I think the long term solution to the problems we face is breaking up the right-wing propaganda machine.

I'm researching my book on the Second Amendment (yeah, I need to get off Twitter and back to work) and learned that in 1872, two candidates declared themselves the winner of Lousiana's gubernatorial race.

Has similarities to 2020 presidential.
I'm still trying to get to the bottom of what happened, but it seems like this: Candidate #1 was the favorite of the newly freed Black population and Candidate #2 was a Confederate.

. . .claimed that #1 won because former Confederate soldiers were not allowed to vote, Carpetbaggers voted for #1, and of course, the underlying accusation is that Black votes shouldn't count.

#2 assumed power.
Trump won't because this isn't 1872. Black votes DO count.
I can't find a good link, so maybe Candidate #2 "won" ( https://lib.lsu.edu/collections/digital/dlnp/colfax-riot) but it looks mighty suspicious to me.

The books I'm reading are telling me that what followed the election was "mass confusion."
You can follow @Teri_Kanefield.
Tip: mention @twtextapp on a Twitter thread with the keyword “unroll” to get a link to it.