Complaints have been made to the UK Statistics Authority regarding misrepresentating data to downplay the risk in education settings.

2/ The government likes to set its own measures of success, initially below 20k deaths was said to be considered a good result. When it quickly became clear this would fail they switched to preventing NHS bed capacity being overwhelmed as their success target.
3/ Looking at how they cleared out hospital beds in Spring, including putting infected patients into care homes, you could argue that meeting their target was more important than preserving life.
4/ When it comes to PPE, test and trace and other Covid funding it certainly seems like they put sorting out their friends and allies ahead of public health.
5/ Government has made keeping schools fully open its second target
"Prioritising education"
"Moral duty"
The problem is they have done nothing to support schools to stay open, weak guidence, no funding, no flexibility,Labour played along "no ifs no buts" https://twitter.com/karamballes/status/1321039092654723072?s=19

6/ As the wheels come off as schools are forced to close due to lack of staff (8% off last week) 500k+ students isolating, positivity rates in students dipping from half-term and now climbing again, the government is having to work harder to conceal the reality.
7/ This week we had headlines that supermarkets are the no1 place for infections. However schools were no2 and no3!
And look what happens if education hadn't been broken up into seperate settings, a conscious decision? 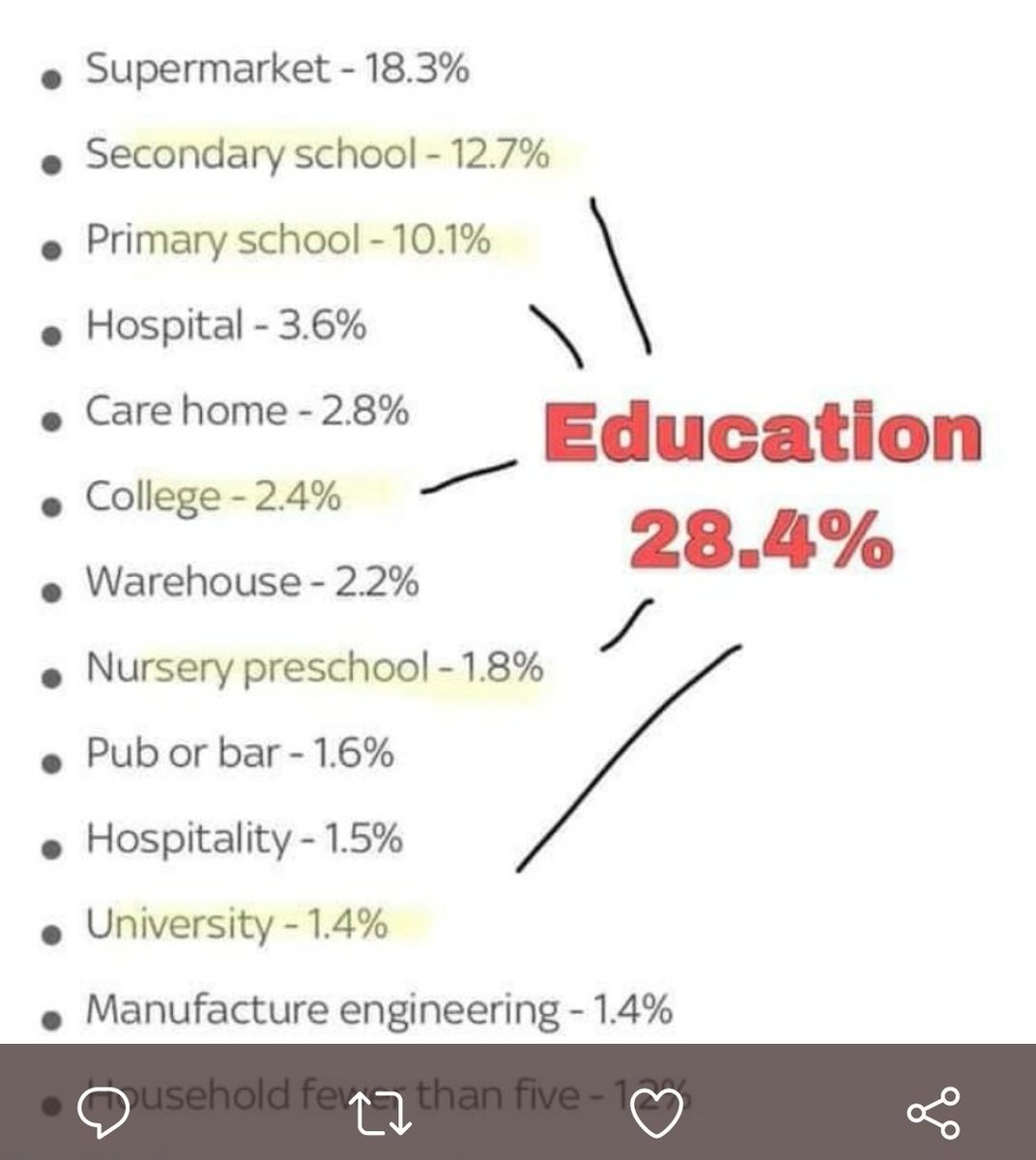 8/ Whats DfE and @GavinWilliamson's response? Media say they've been contacting schools wanting to know why so many are isolating.
The DfE/PHE hotline decides who to isolate not schools, was the whole point of this story to make the public think school leaders are at fault?
9/ DfE also put out a statement that schools must remain fully open, and that schools shouldn't be moving to blended learning, as if its a choice that's being made, once again it seems to be framing a narrative that Heads are to blame for government negligence,more downplaying
10/ In the real world,
Student isolations mean many schools are partially shut, staff isolations means some schools have shut entirely, others with large outbreaks are being shut down after losing control of transmission
11/ NHS in Hull begging government to allow schools to move to blended learning in an effort to protect hospital capacity
Other LAs in talks with heads about moving to blended learning out of necessity.
A disorganised mess, DfE actively conceals the truth they've failed schools.
12/ Yet the government is still putting out blatant disinformation like this Facebook post that completely gaslights educators and families' legitimate concerns regarding classes of 30 without masks or adequate ventilation. 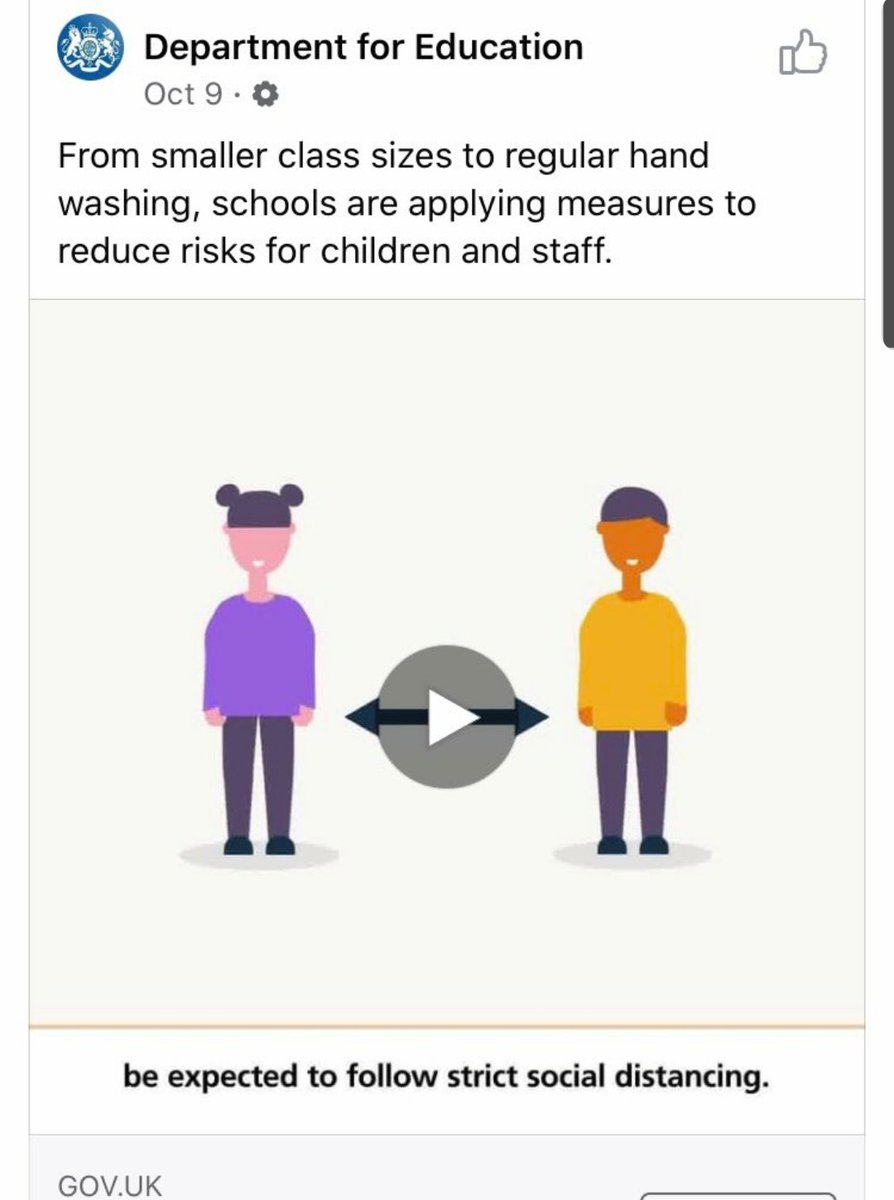 13/ DfE posting staged videos of classrooms with students in empty corridors entering classrooms and working whilst wearing masks when their own guidence tells schools this shouldnt be allowed!
"Look how safe schools are if they dont follow our own advice" https://twitter.com/karamballes/status/1328122511477895169?s=19

14/ Much of the media are just as complicit. SAGE released a paper on the infectiousness of children, a few (low confidence)comments about not having evidence were reported but the more worrying (high confidence)findings that were backed with stats

Should have made headlines 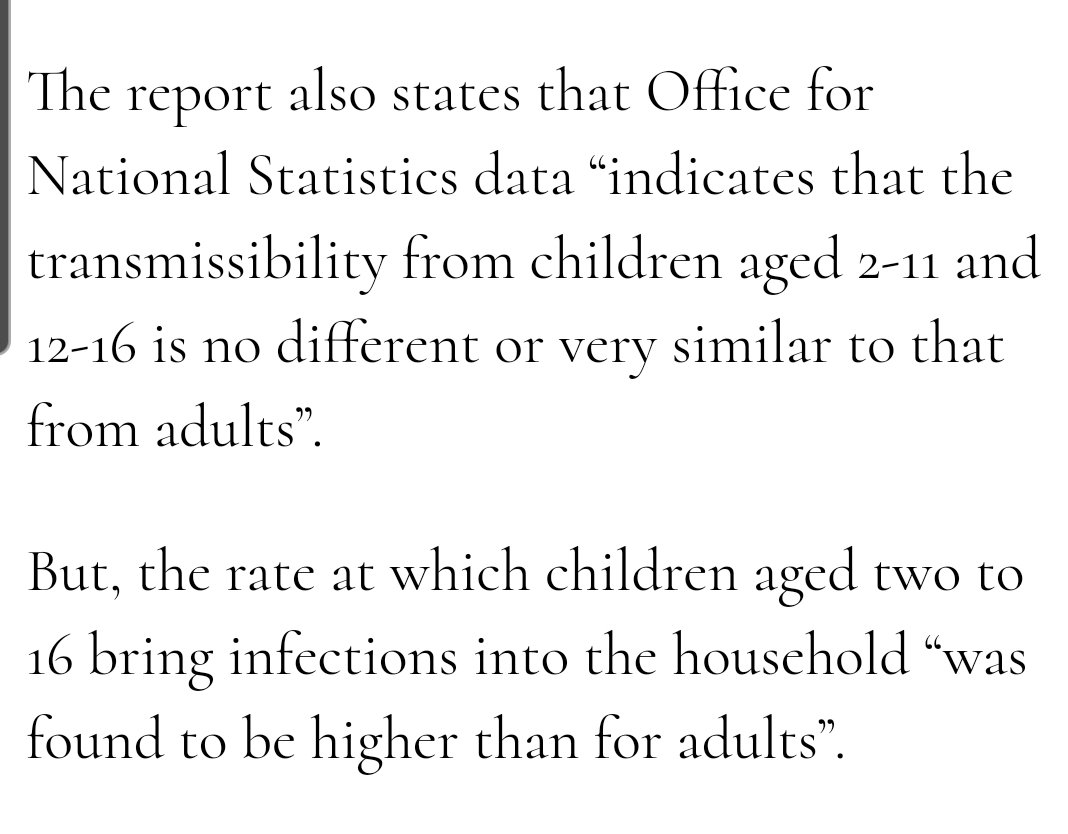 16/ Still having to complain about classroom pictures in the media, tiny classes, social distancing, masks, seems like they're using stock photos from other countries.
17/ I wasn't entirely right when I said DfE/PHE hotline is in charge if isolations, because they're overwhelmed with calls they have started telling schools with multiple outbreaks to work it out on their own. In a meeting this week a Head said she'd been told to stop calling
18/ Once a head has managed an outbreak or two apparently they are prepared to operate as public health experts. Infection control is the job for many heads now, not focusing on education standards. Many leaders must be reaching breaking point from lack of support.
19/ Besides abandoning heads, telling them not to call the hotlines causes another issue, the hotlines will have no record of additional cases or outbreaks in those schools.

There are a lot of issues with the hotlines as covered here by @GeorgeMonbiot https://www.theguardian.com/commentisfree/2020/nov/03/advice-schools-covid-infection-pupils-classrooms-test-and-trace
School safety is the latest outsourcing scandal. I feel a creeping despair | George Monbiot

Infection is raging among older pupils, classrooms are packed and test and trace is useless. Another catastrophe is looming, says Guardian columnist George Monbiot

https://www.theguardian.com/commentisfree/2020/nov/03/advice-schools-covid-infection-pupils-classrooms-test-and-trace
20/ It has also come to our attention that it appears the DfE hotline isn't passing on reports of outbreaks to PHE. For a month we've had reports of "over a thousand" outbreaks but nothing more accurate, but the woeful attendance figures shows its could be 10k+
21/ I have also been pursuing figures on how many education staff have died of Covid since September, the earlier ONS occupational death surveys found around 165 educators died in the first wave.
ONS has told me that there are currently no plans to conduct another survey.
22/ So it looks like the government isn't collating data on the number of educators infected, hospitalised or dying from covid.

If UK Statistics Authority upholds complaints then, I want to see about exploring a legal route for Corporate Manslaughter against government like NHS workers are over PPE.
You can follow @karamballes.
Tip: mention @twtextapp on a Twitter thread with the keyword “unroll” to get a link to it.