Read on Twitter
Keeping track of the Trump's and his supporter's efforts to cheat, spread lies, and stoke fears to delegitimize election.

Updated and expanded by QL
Example 1:

Recording left by a deceased marijuana candidate says he was recruited to be a spoiler in Second District race.

Trump encouraged people to vote twice (from at least September) https://www.nytimes.com/2020/09/02/us/politics/trump-people-vote-twice.html
Trump Encourages People in North Carolina to Vote Twice, Which Is Illegal

The president’s suggestion, which he framed as a way to test the security of elections systems, constituted the kind of voter fraud he has railed against.

A viral video that purports to show about 80 “ballots,” all for Donald Trump, being burned is fake, Virginia Beach city officials say. The video, which surfaced on Tuesday, features a man with a...

People who are not poll workers claiming that they through out ballots.

Several Twitter accounts falsely claiming to be tied to The Associated Press have been suspended after broadcasting unverified U.S. election results, according to screenshots circulating online and a...

Lying that ballots have been "Magically found". https://apnews.com/article/election-2020-joe-biden-donald-trump-wisconsin-misinformation-013e89a828a01668ba3da6a2f6f91ca9
Trump and allies spread falsehoods to cast doubt on election

While much of America was sleeping Wednesday morning, President Donald Trump’s leads in crucial battleground states began slipping — and that's when online falsehoods about the election started...

After announcing the Trump campaign's plan to pursue a series of lawsuits at an event billed as a press conference in Philadelphia, the President's son, Eric Trump, and his personal lawyer, Rudy...

Spreading lies that more people voted in Wisconsin than who were registered to vote. https://twitter.com/JamesSurowiecki/status/1324132814091132929

In a press conference on Thursday, Nevada Voter Registrar Joe Garcia says that he has concerns for his staff's safety as his election department counts ballots.

Threatening to kill Biden voters. In this case it was an Alabama police captain.

President Trump raged on Wednesday that he wants "all voting to stop." But emails obtained by The Daily Beast and the Milwaukee Journal Sentinel revealed Friday that it was Republican Party officials...

‘The president is posting lies and misinformation at a breathtaking clip,’ one congressman said

President Trump is racing to raise money for an “official election defense fund.” But the fine print on the solicitations tells a different story: Half -- or more -- of any contribution will be used...

The most turbulent and norm-breaking presidential election of a lifetime has led to an extraordinary spectacle in the United States over the past three days: armed protesters gathering nightly...

Battleground states will use quite different methods to count the record number of mail-in ballots. But they may be the way of the future.

Trump aides were reportedly furious when the usually loyal Fox News network became the first to project that Joe Biden would flip Arizona.

Brad Raffensperger replies to criticism from Sens. Loeffler and Perdue by suggesting they focus on their runoff races instead of his job.

Posts falsely claim that 14,000 dead people cast a vote in Wayne County. Some names included on the list are still alive, or not living in Michigan. 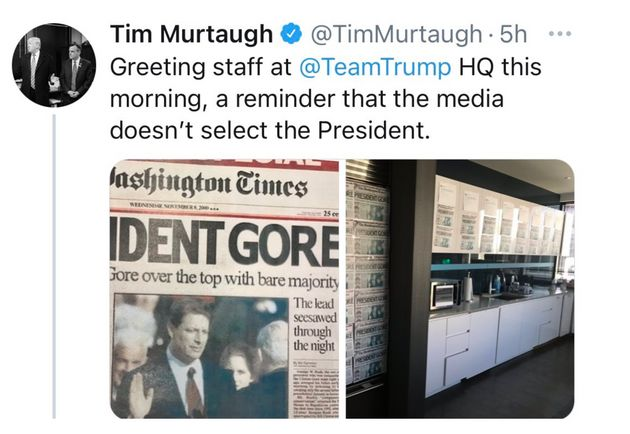 On election eve, the Trump administration is still working to roll back Obamacare.

Followed by a stilted laugh, comments were possibly attempt at humour

Refusing to concede https://www.salon.com/2020/11/10/martha-mcsally-refuses-to-concede-arizona-senate-race-even-as-math-shows-she-cant-win/
McSally refuses to concede race even as math shows she can't win

Steve Bannon has been outed for his involvement in running a network of misinformation pages on Facebook. Who could have possibly seen this coming.

A Pennsylvania postal worker whose claims have been cited by top Republicans as potential evidence of widespread voting irregularities recanted to U.S. Postal Service investigators.

Stopping President-Elect from getting intelligence reports https://www.nbcnews.com/politics/national-security/biden-not-getting-intelligence-reports-because-trump-officials-won-t-n1247294
Biden not getting intel reports because Trump officials deny he won

Biden transition officials confirmed the president-elect is not receiving the President's Daily Brief, the intel report that goes to senior U.S. officials.

As supporters of President Donald Trump continue to spread baseless allegations of voter fraud, a new theme is emerging in their attacks on the election's legitimacy.

Federal prosecutors have charged a Staten Island, New York, man with making threats to kill and ordering others to kill politicians, law enforcement and people who were celebrating the results of the...

I have given him gold. If you use reddit please drop him an upvote or gold.

I'll expand on further cases below 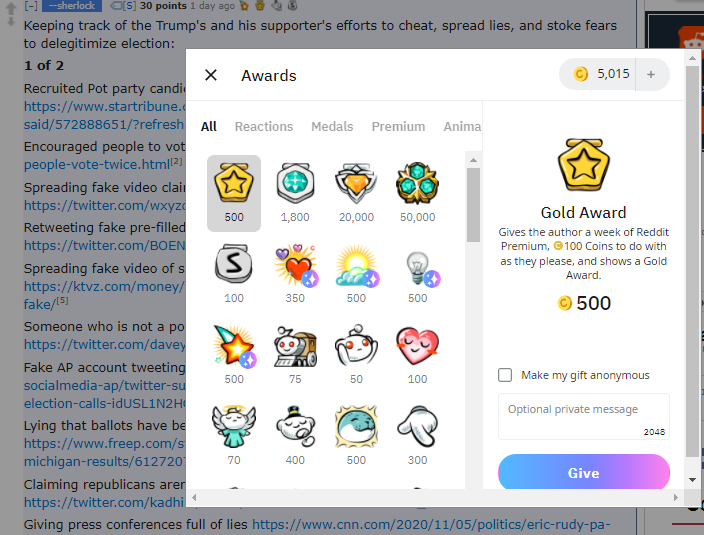 Running 3rd party candidates to try and syphon votes off of Biden. https://www.nytimes.com/2020/08/04/us/politics/kanye-west-president-republicans.html
Republicans Aid Kanye West’s Bid to Get on the 2020 Ballot

Republican activists in at least half a dozen states are deeply involved in the effort to get Kanye West’s name before voters, renewing questions about the aim of his campaign.

There is no “both sides do it” when it comes to intentionally keeping Americans away from the polls.

In Texas Republican Governor mandated a single ballot drop box per county - which was upheld by a Republican supreme court.

Since every state allows some form of mail voting, it’s important to know the rules and to be aware of what you may have to do in order to receive a mail-in ballot.

Officials seek to recruit 50,000 poll watchers and spend millions to fight voter fraud. Democrats say the real goal is to stop them from voting.

Mitch McConnell and Senate republicans blocked legislation to protect American' right to vote and prevent foreign interference. They also blocked legislation passed by the house to give 3.6 billion in election aid to states. https://www.motherjones.com/politics/2020/06/kentucky-votes-today-here-are-all-the-ways-mitch-mcconnell-has-made-that-harder/
Kentucky votes today. Here are all the ways Mitch McConnell has made that harder.

The state's senior senator has repeatedly refused to vote on bills to improve ballot access.

Report: Barr Behind Trump's Fixation On 9 Military Ballots In Pennsylvania

Stop the Steal briefly resurfaced around the midterms in 2018 — with Republicans employing the hashtag during a recount in a neck-and-neck Florida race for U.S. Senate — but it wasnR…

In a wide-ranging interview, Brad Raffensperger expressed exasperation over a string of baseless accusations by President Trump and his allies about Georgia’s vote.

USPS under DeJoy disassembled mail sorting machines in a number of states including Oregon, Michigan, Oklahoma and Kansas. 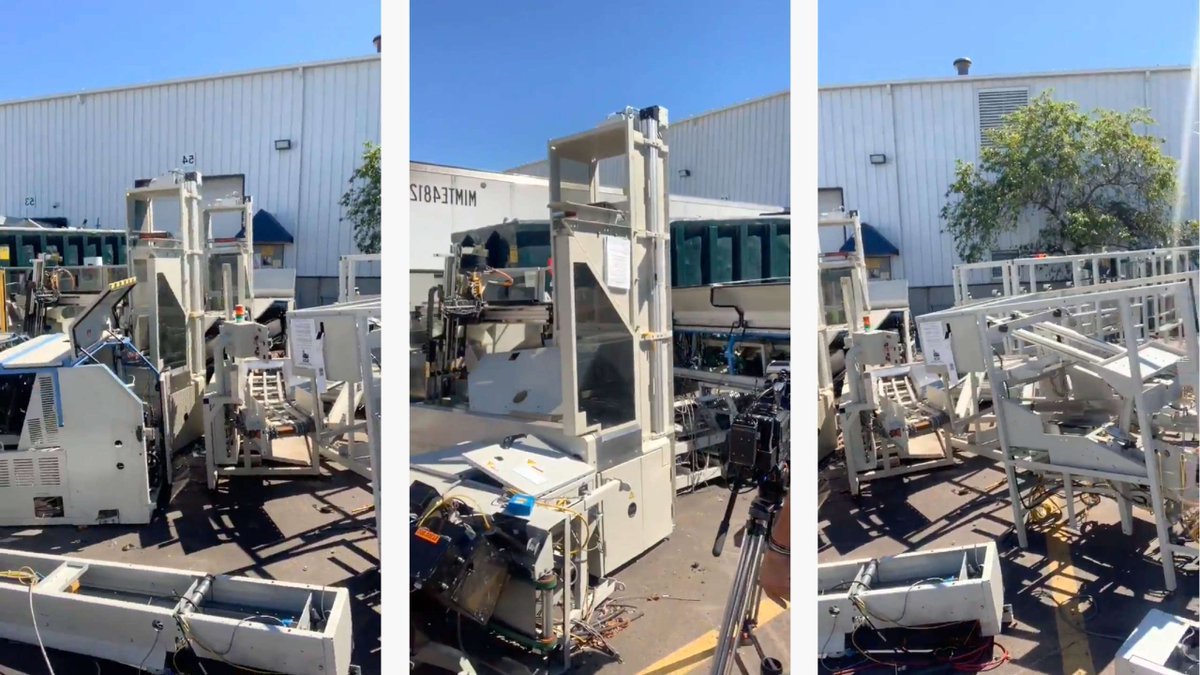 USPS under Dejoy removed at least 700 mail collection boxes with “no intention to” bring them back.

This thread has been updated here in PDF form for download and easier dissemination. https://www.lifeofthequarantined.com/attacksondemocracy
Articles | Quarantined Life

https://www.lifeofthequarantined.com/attacksondemocracy
You can follow @Real_QL.
Tip: mention @twtextapp on a Twitter thread with the keyword “unroll” to get a link to it.