Read on Twitter
Rs blocked efforts 2 assess the legitimacy of their own “wins” (2000, 2002, 2004, 2016), many of which defied polls or involved glitches. They killed the #SAFEAct, which wld have required robust manual audits this year. Rs have unclean hands on the issue of election integrity. 1/ 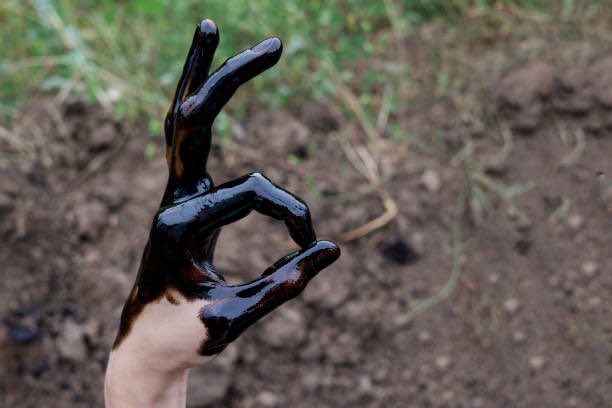 That Rs feel entitled to howl over a corrected machine error—after the many more errors that they gleefully ignored in the past—in an election that Biden was expected to win (unlike so many of the GOP’s supposed “wins”)—& after killing the #SAFEAct—is enuf to make me see red. 2/
3/ Republicans didn’t give a sh#t that 16k votes were inexplicably deleted from Al Gore’s vote total in Volusia County, FL in 2000 & that the explanation made no sense. https://www.nytimes.com/2018/09/26/magazine/election-security-crisis-midterms.html 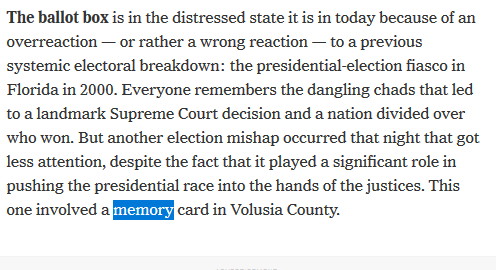 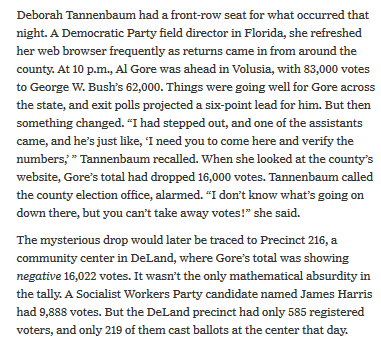 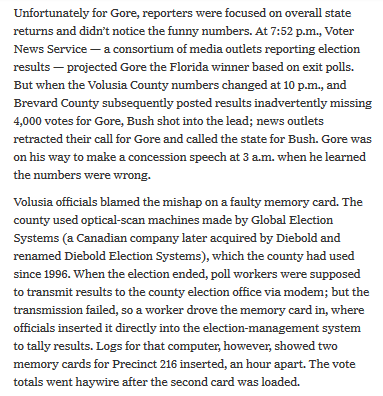 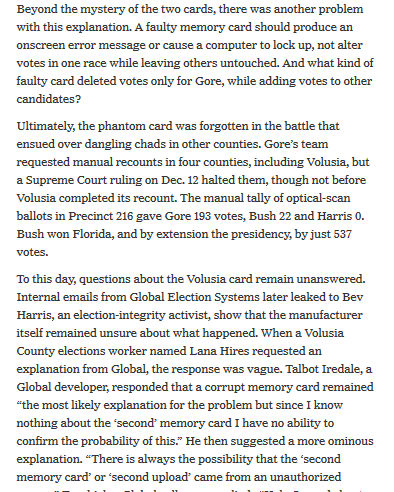 4/ Republicans did not care when an additional 4k votes were deleted from Gore's total in Brevard County, FL in the 2000 presidential election. https://edition.cnn.com/2001/ALLPOLITICS/stories/02/02/cnn.report/cnn.pdf

5/ On the contrary, Republicans in 2000 staged a fake "Brooks Brothers" protest--w/ Roger Stone at the helm-- to generate fake outrage that helped them run out the clock & persuade SCOTUS to stop the recount. https://buzzflash.com/articles/the-gop-house-thugs-followed-the-brooks-brothers-riot-intimidation-playbook 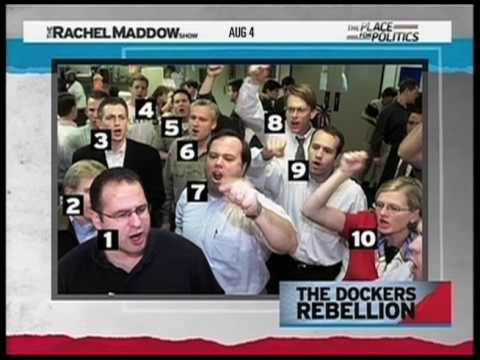 6/ Rs did not care when 6K votes vanished from @DonSiegelman's total AFTER he was declared victorious in his 02 gubernatorial reelection race in Alabama. On the contrary, Karl Rove's client, Alabama's AG, confiscated the paper ballots to prevent a recount. 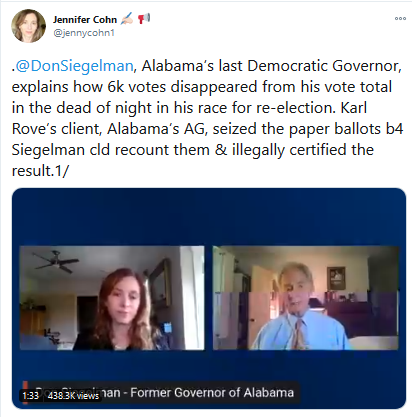 7/ Don't take my word for it about Siegelman's reelection race and what was done to him after that. Pls watch Atticus v. the Architect, which is free on Amazon Prime. The GOP declared war on democracy long ago. Most of us just didn't know it. https://www.amazon.com/Atticus-Architect-Political-Assassination-Siegelman/dp/B078SF4M4G
Watch Atticus v. The Architect: The Political Assassination of Don Siegelman online - Prime Video

The documentary about the most notorious political prosecution in American history. How a corrupt group of politicos, led by Karl Rove, secretly rigged a federal court to railroad former Alabama...

https://www.amazon.com/Atticus-Architect-Political-Assassination-Siegelman/dp/B078SF4M4G
8/ Rs didn't care when Ken Blackwell--Ohio's Secretary of State in 2004 & a member of Bush's campaign--hired Republican operatives to re-route Kerry's results thru a backup server hosted by Smartech, which also hosted the Bush White House's emails, in TN. https://medium.com/@jennycohn1/americas-electronic-voting-system-is-corrupted-to-the-core-1f55f34f346e
America’s Electronic Voting System is Corrupted to the Core

https://medium.com/@jennycohn1/americas-electronic-voting-system-is-corrupted-to-the-core-1f55f34f346e
9/ On the contrary, the same GOP operatives responsible for butterfly ballots in 2000--which confused Jewish seniors in Florida into voting for Pat Buchanan rather than Gore--corrupted the 2004 recount w/ cheat sheets & remote access to county tabulators. https://medium.com/@jennycohn1/the-disturbing-connection-between-the-butterfly-ballots-of-2000-and-the-corrupted-ohio-2004-48b1e07434ba
Two companies owned by a single family were directly involved with the “butterfly ballots” of 2000…

https://medium.com/@jennycohn1/the-disturbing-connection-between-the-butterfly-ballots-of-2000-and-the-corrupted-ohio-2004-48b1e07434ba
10/ Rs did not care that Russia attacked our election infrastructure in the run-up to the 2016 election. On the contrary, McConnell refused to sign a bipartisan statement identifying Russia as the culprit. https://www.npr.org/sections/thetwo-way/2018/01/24/580171396/biden-mcconnell-refused-to-sign-bipartisan-statement-on-russian-interference
Biden: McConnell Refused To Sign Bipartisan Statement On Russian Interference

Speaking at the Council on Foreign Relations, the former vice president said the Senate majority leader "wanted no part" of a statement condemning Russian interference in the 2016 election.

https://www.courthousenews.com/trump-moves-to-stop-recount-in-three-states/
12/ As a result, most large WI counties conducted their recount only by machine (which can't detect hacking), the MI recount was stopped after 3 days (& excluded machines w/ broken safety seals & precincts where the # of votes & # of voters didn't match), & ...
13/ ... the PA recount never got off the ground. I wrote about the GOP's successful derailment of the 2016 recount here. https://www.nybooks.com/daily/2019/12/17/how-new-voting-machines-could-hack-our-democracy/
How New Voting Machines Could Hack Our Democracy | by Jennifer Cohn | The New York Review of Books

The United States has a disturbing habit of investing in unvetted new touchscreen voting machines that later prove disastrous. As we barrel toward what is set to be the most important election in a...

https://www.nybooks.com/daily/2019/12/17/how-new-voting-machines-could-hack-our-democracy/
14/ The GOP then killed all efforts to secure the 2020 election, including the #SAFEAct, which would have required robust manual election audits to confirm electronic outcomes in all federal races. https://www.salon.com/2020/02/13/senate-gop-blocks-election-security-bills-as-intel-report-warns-of-russian-meddling-in-2020/
Senate GOP blocks election security bills despite dire warnings

https://www.salon.com/2020/02/13/senate-gop-blocks-election-security-bills-as-intel-report-warns-of-russian-meddling-in-2020/
15/ How many presidential elections and thus Supreme Court seats have Republicans stolen? We will never know because Rs insisted on electoral opacity. We must not allow them now to weaponize that opacity to steal the 2020 election or the narrative surrounding it.
16/ How could I not mention the wiped election server in the aftermath of Karen Handel’s supposed defeat of @ossoff (D) in the #GA06 race of 2017, which included a “rare memory card error” in Georgia’s largest county? I wrote about all of that here. https://link.medium.com/AKs6ePTLjbb
Georgia: The Epicenter of America’s Corrupted Electronic Elections

A computer server crucial to a lawsuit against Georgia election officials was quietly wiped clean by its custodians just after the suit was filed, The Associated Press has learned. The server's data...

https://apnews.com/article/877ee1015f1c43f1965f63538b035d3f
18/ “Rare error’ delays Fulton County vote counts in 6th district race” - 4/19/17 https://www.ajc.com/news/local-govt--politics/rare-error-delays-fulton-county-vote-counts-6th-district-race/dleYXJvjL1R9gSsw1swwAJ/
19/ Or the 127,000 votes that vanished from ES&S voting systems in predominantly African American precincts in Georgia in 2018? Did the GOP care then? Nope. They blocked the lawsuit that sought to investigate it. https://www.theroot.com/exclusive-thousands-of-black-votes-in-georgia-disappea-1832472558
Exclusive: Thousands of Black Votes in Georgia Disappeared and No One Can Explain It

Voter suppression in Georgia was one of the most discussed issues during the 2018 midterm elections. Front and center in the debate stood Democratic gubernatorial candidate Stacey Abrams, a longtime...

https://www.theroot.com/exclusive-thousands-of-black-votes-in-georgia-disappea-1832472558
You can follow @jennycohn1.
Tip: mention @twtextapp on a Twitter thread with the keyword “unroll” to get a link to it.