In effect the report abandons the 2030 decarbonisation target mandated by Conference (unmentioned). In several places it embraces the net-zero 2050 target or policies in line with it. The level of ambition is majorly reduced from Labour's 2019 manifesto.
*Levels of investment*

It may sound a lot but the report doesn't call for much new spending. Largely, it's about 'bringing forward' capital investment already committed by Sunak.

Commitments to public ownership of energy, water & broadband were at the heart of the 2019 conference motion, manifesto & member submissions.

The demands are vague and unsubstantive. Nothing on free bus travels for <25s or restoring cut bus routes, let alone the expansion of free public transport we really need. Nothing on moving away from car culture. https://tribunemag.co.uk/2019/08/make-public-transport-free
Make Public Transport Free

Simply a call for the Government to bring forward its own investment plans. No mention of nationalisation of Openreach or free broadband access as a human right. https://tribunemag.co.uk/2020/05/why-free-public-broadband-was-a-good-idea
Why Free Public Broadband Was a Good Idea

The pandemic has demonstrated how fundamental the internet is to our lives, but private companies continue to rip us off while providing poor service – it's time to think again about free public...

Labour had existing plans for 320,000 climate apprenticeships which could be accelerated. They go unmentioned, in favour of vague demands.

Labour has promised to create a climate apprenticeship programme which will train an average of 80,000 people a year.

Nothing on winding down the Big Polluters or a just transition away from fossil fuels & aviation, despite a prominent campaign by LGND this year.

Can't be a green recovery if you're just relying on technological solutions to these! https://tribunemag.co.uk/2020/05/its-time-for-labour-to-be-bold-on-the-airline-crisis
It’s Time for Labour to Be Bold on the Airline Crisis

Coronavirus has cratered the airline industry, and its executives have responded by attacking workers. Labour needs a bold response – now is the time to argue for public ownership to save jobs and...

There is a much-trumpeted call to mandate climate risk disclosures. But Labour's 2019 threat to delist those failing the test is gone. No regulatory threat replaces it. https://labour.org.uk/press/labour-to-go-after-the-banks-and-hedge-funds-financing-climate-change/
Labour to go after the banks and hedge funds financing climate change - The Labour Party

Finally the plan resolutely ignores members' and unions' democratically-expressed demands, formally Labour's policy. Conference motion isn't mentioned, nor is the fact that over 2/3 of submissions were in support of LGND proposals. 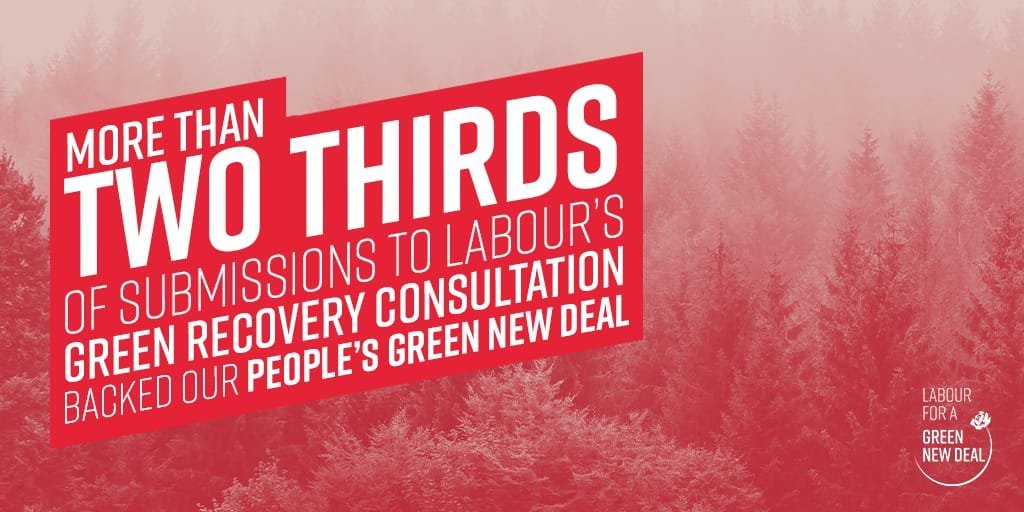 The argument might come that this is only a stimulus package and more will be put out in future. We'll see.

But if it's being labelled as a 'green recovery plan' or 'Green New Deal' - we're clear it doesn't live up to the science, climate justice or to party democracy.
What's more, I suspect it will be blown out the water next week by Johnson's techno-utopian 'green industrial revolution'.

Labour was (briefly) the Party of Climate. At this rate, not for long!
You can follow @AngusSatow.
Tip: mention @twtextapp on a Twitter thread with the keyword “unroll” to get a link to it.