The Heist of all time

I expect Mnuchin to have STOLEN roughly a Trillion dollars. That is NOT typical Trumpian/Republican mismanagement or cronyism like tax cuts for billionaires or money laundering via Covid funding. I mean

Short thread...
You remember the most vile American ever to have lived? Manafort. He arranged the kleptocracies in countries on four continents. He was the go-to guy for Marcos, Mobutu Sese Seko & Yanukovich, etc - murderer dictator monsters FAR FAR more horrid (in their countries) than Trump
In each case, Manafort organized the LARGEST heist of public property & government funds into pockets of the dictators, that DECIMATED those countries - often for DECADES to come.

That was a 'young Manafort' before he got his hands onto the biggest piggy-bank ever: USA
Manafort was Putin's guy. Trump hated how Manafort controlled Trump, so Trump fired Manafort in aftermath of Melania's plagiarization of Michelle Obama's speech etc. But Manafort never went away. (he was never paid by Trump team, was paid by Putin).
Mnuchin is a serial financial crimes mobster who ran a several fraudulent banks. He should have a restraining order to never even be near the word 'money'. Now add Trump to the mix, the must corrupt American politician of all time.

OF COURSE THEY RAIDED UNCLE SAM
While Trump has been misdirecting us with his daily Twitter tirades, Mnuchin has taken Manafort's initial guidance, and run the BIGGEST HEIST in human economic history. Not the heist of the century. The heist of the MILLENIUM. It is OBVIOUS. He has effectively bankrupted America
That is what Trump did with his 5 casinos. He hollowed them out. By the time the audiotors finally got to examine the books, there wasn't anything left, except unpaid bills.

I expect Mnuchin to have stolen something around one TRILLION dollars. And worst: US taxpayers WILL PAY
If you don't understand, please study 'kleptocracy' (you will find numerous mentions of a familiar name, a certain Paul Manafort as apparently the Leonardo Da Vinci of governmental financial fraud).

For all the horrid things Trump has done, if he crushes American taxpayers...
If Trump crushes American governmental property, and a bill to US taxpayers worth a Trillion dollars, effectively bankrupting America, the misery he produces will DWARF the deaths of Covid he's now ALSO caused. This will be his MOST DEVASTATING crime

So I ask: Where is Mnuchin?
Your T Dawg to the rescue:

Link to Wiki page on Kleptocracy. Please read this whole article and bear in mind, that is NOW happening in the USA with Mnuchin & Trump:

https://en.wikipedia.org/wiki/Ferdinand_Marcos
And to 'not give you nightmares' today... see one of Manafort's.. ahem... less considerate clients, another monster kleptocrat, arguably the world's biggest kleptocrat and arguably Manafort's most cruel client (and I do mean 'arguably').

https://en.wikipedia.org/wiki/Jonas_Savimbi
And then you don't need to read the USA-specific parts to Paul Manafort's life of crime. Read ONLY the parts about Marcos & Mobutu, to understand why I fear Manafort coached Mnuchin to do the same with Trump:

https://en.wikipedia.org/wiki/Paul_Manafort#Association_with_Jonas_Savimbi
I honestly hope that they did not raid the United States financial system, but looking at Manafort's background, Trump would have ASKED about all those heists, when Manafort was his Campaign Chairman in 2016.

The pattern is frightful. Even without Mnuchin & Trump own crimes
I added this, from Wikipedia article on Kleptocracy. To illustrate where Manafort's most notorious clients sit on the all-time list: 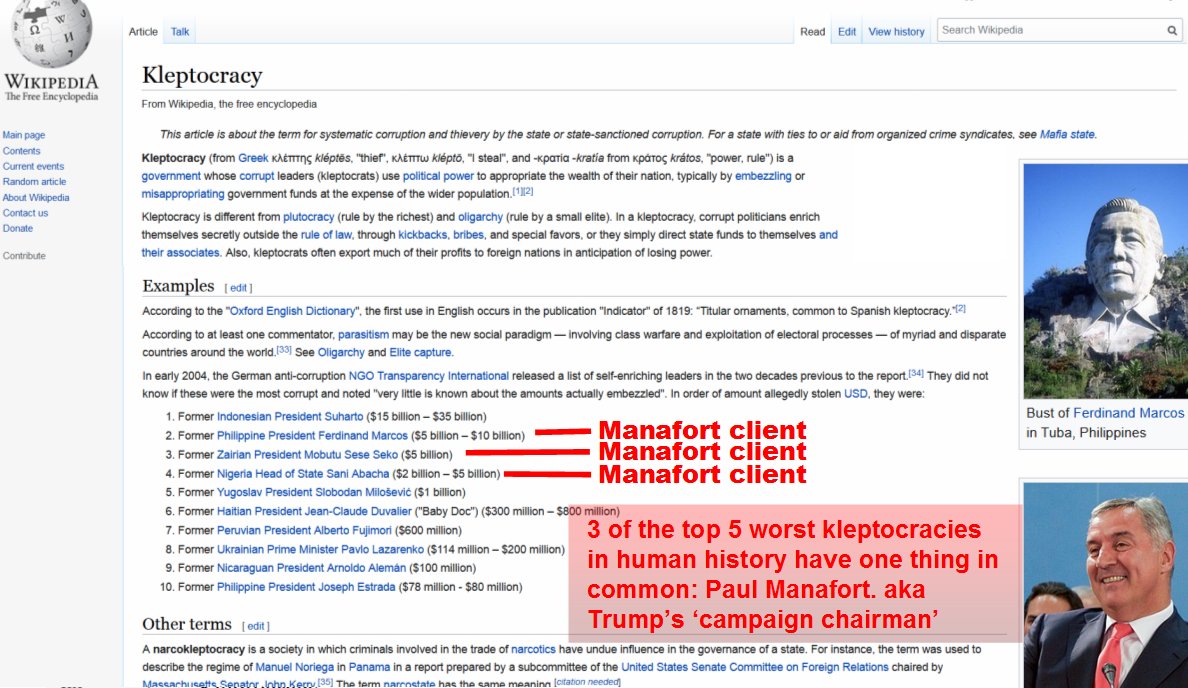 To celebrate worst American of all time, I rewrote classic xmas song 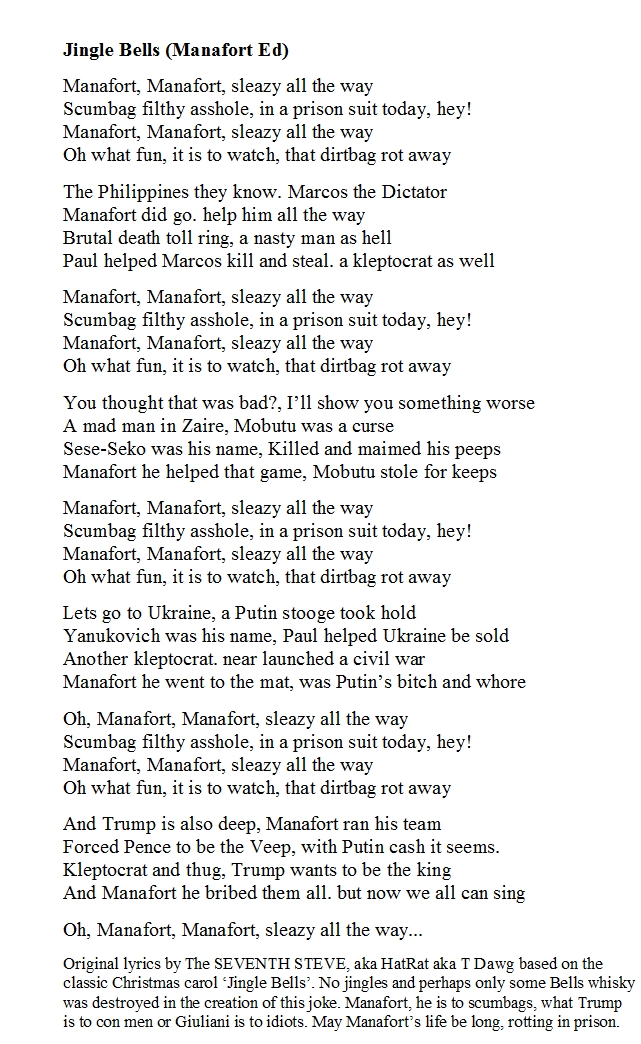