Party for Socialism and Liberation
pslweb

Read on Twitter
PSL STATEMENT on the defeat of Donald Trump

More than 70 million people voted to oust Donald Trump. This was not a vote for Joe Biden, a truly uninspiring candidate who became the nominee when the Democratic Party ruling class establishment united to stop Bernie Sanders in March 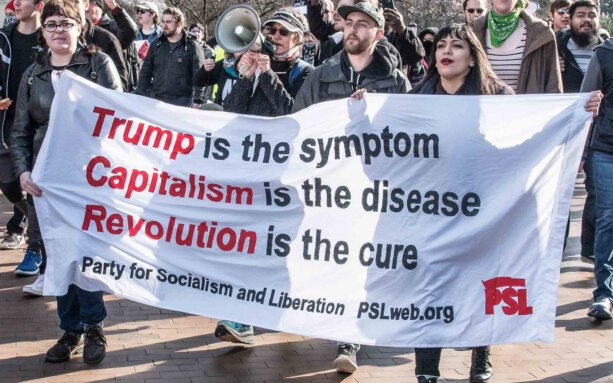 Nor did the historic voter turnout for Biden signify support for his pro-Wall Street, pro-war positions and his role as an architect of the current system of policing and mass incarceration.
This morning the major corporate-owned media networks all announced that Joe Biden had sufficient electoral college votes to become the next president of the United States.
It is noteworthy that Fox News, which has been so vociferously cheer-leading for Donald Trump during the last four years, also called the election for Biden and dramatically changed the tone of its coverage to be very supportive of Biden and the campaign he ran.
Donald Trump insists that he will fight on. He argues that he is the true winner of the election and the only reason that he might not be president is because of widespread election fraud. This is not true and as more and more of the mail-in vote arrived ...
...in Pennsylvania, Georgia and other states it is crystal clear that Trump in fact has lost the electoral college vote in a very narrow contest that almost exactly replicates the narrow outcome in 2016 but with the margins reversed.
Trump broke the cardinal rule of U.S. capitalist politics when he denounced the election system as a fraud. Maintaining the image of a peaceful transfer of power between the two ruling class parties for over a century has been a core element of American capitalist governance.
Every system requires either undiluted brute violence that is routinely dispensed on oppressed classes, or it relies on its legitimacy with a sector of the population which is then, of course, supplemented by the threat of violence and state coercion.
“Democracy” is the preferred form of class rule because achieving legitimacy with a significant sector of the working class and intermediate strata makes the system easier to maintain. It avoids the tension and conflict which makes class rule more complicated and unstable.
Trump’s motivation is very narrow and personal. If he loses the election, he and his family will be subject to multiple criminal prosecutions and civil legal cases in many states on issues related to tax evasion, financial fraud and other such crimes.
If Trump becomes a civilian, he loses his immunities for state-based prosecutions on financial crimes. This will be Trump’s future and he knows it. The ruling class will not sacrifice the legitimacy of its political system to protect Donald Trump in his post-presidency life.
Trump has spent the last days trying to use ultra-right, and fascist mobilizations to stop the vote count. But he has become increasingly isolated. His base of support within the capitalist establishment is crumbling and that will continue.
The fact that Fox News and the Wall Street editorial board have turned against him in his quest to condemn the election process is a clear indication that his fate has been sealed.
The 2020 presidential election was a referendum on Trump. The Democrats did very badly in the rest of the election. They lost seats to the Republicans in the House and they failed to win the Senate.
The fact that it was a close election at the presidential level at a time of the biggest healthcare catastrophe and mass unemployment in living memory shows how little the Democratic Party has to offer the masses of people.
The Democratic Party ruling class establishment adopted a center-right orientation and refused to embrace the demands for Medicare for All, a cancellation of rents and mortgage payments during the pandemic, canceling student debt or meaningful policing reforms.
Ironically, the same Democratic Party establishment now blames the left for its failures in the down ballot contests during the election.
The Party for Socialism and Liberation has argued since 2016 that Donald Trump is merely a symptom of a larger disease. Late stage capitalism is destroying not only the working class and poor but big sectors of the middle class.
As the billionaires get ever richer and more powerful, the level of human suffering inside “the richest country in the world” increases rapidly. The disease is capitalism, and the cure is to replace the system that fosters poverty amid plenty and destroys workers.
The solution lies not with the Democratic Party but with the replacement of capitalism by a humane, rational and sustainable social system: SOCIALISM
The task at hand is to build a mass movement demanding that the Biden White House take immediate emergency measures to eradicate mass unemployment, provide a livable guaranteed income for all of those who have been made jobless; ...
...to cancel rents, evictions and foreclosures; cancel student debt and adopt a Medicare for all healthcare system.

At the same time, we have to mobilize greater opposition to U.S. militarism and war, which is not even slightly diminished under a government led by Joe Biden.
Read the full statement on Liberation News: https://www.liberationnews.org/psl-statement-the-defeat-of-donald-trump/
PSL statement: The defeat of Donald Trump

The Party for Socialism and Liberation has argued since 2016 that Donald Trump is merely a symptom of a larger disease. Late stage capitalism is destroying not only... #DemocraticParty #DonaldTrump

https://www.liberationnews.org/psl-statement-the-defeat-of-donald-trump/
You can follow @pslweb.
Tip: mention @twtextapp on a Twitter thread with the keyword “unroll” to get a link to it.