Read on Twitter
The Obama administration inherited a vast economic crisis. They responded with Quantitative Easing, pumping trillions into the finance sector to rescue the banks that had knowingly gambled on bad mortgages, losing so much they were about to go under. 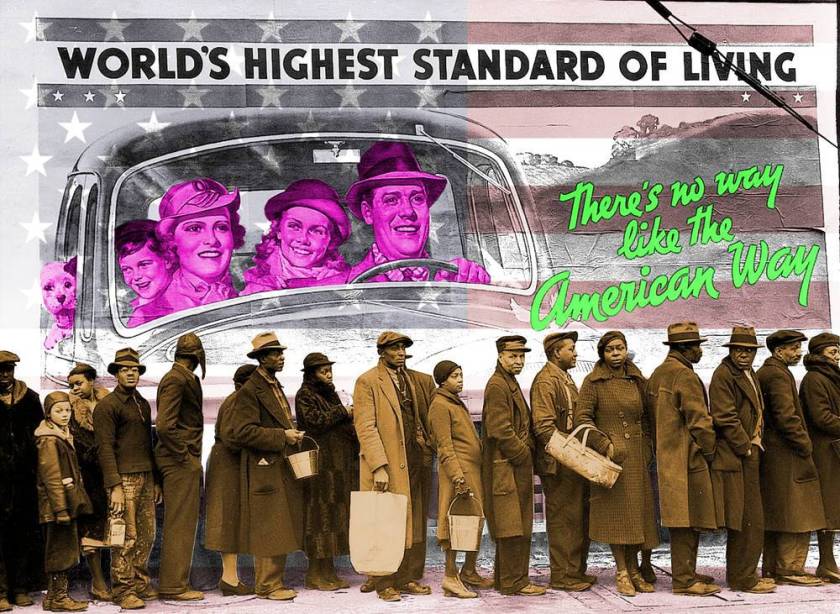 At the time, deficit hawks predicted inflation, which is a commonsense prediction: inflation is what happens when the amount of money chasing goods and services goes up faster than the supply of those goods and services, creating bidding wars.

2/
They were right...and wrong. What we got was asset bubbles, especially in housing markets, driving up the price of putting a roof over your head rewarding speculators and landlords, especially Wall Street landlords.

3/
And Obama's handling of the financial crisis put a lot of us under the thumbs of landlords! Obama bailed out the banks, but not the mortgage holders, kicking off waves of foreclosures.

4/
Thanks to lax oversight, banks that had cheated to originate or service mortgages were able to cheat on foreclosures, too - stealing houses from borrowers who were up-to-date on payments or who were entitled to forebearance.

5/
I mean, literally stealing houses by the hundreds or even the thousands. The very same people who created the great financial crisis got bailed out, rather than punished, and used their new lease on life to commit even worse crimes with total impunity.

6/
The houses that were foreclosed (and sometimes stolen) were flipped to Wall Street, who LOVE financial products based on peoples' homes. After all, people will move heaven and earth to keep shelter over their kids' heads.

Investment firms are bundling rental homes into new securities. What could go wrong?

https://www.motherjones.com/politics/2014/02/blackstone-rental-homes-bundled-derivatives/
Corporate landlords built a sturdy, three-legged stool to guarantee the flow of rents to their investors.

I. Jack up rents to consume the majority of tenants' income:

If housing is back, then why is the percentage of people who own homes in our country at a twenty-year low?

https://www.nakedcapitalism.com/2017/09/wall-street-owns-main-street-literally.html
II. Cease maintenance, knowing that your tenants have no recourse if their homes are crumbling and unsafe:

On a chilly December afternoon in Atlanta, a judge told Reiton Allen that he had seven days to leave his house or the marshals would kick his belongings to the curb. In the packed courtroom, the...

https://www.reuters.com/investigates/special-report/usa-housing-invitation/
America's housing crisis - substandard homes rented at unsustainable costs to people who had their own homes stolen from them by the same investors they're currently paying rent to - is a major legacy of QE, and it's definitely inflationary.

10/
But it's a highly selective form of inflation. Many people won't experience it at all: if you owned your house before the crisis and weathered it, the asset bubble has made your home more valuable, while falling interest rates let you refi at rock-bottom rates. You're great.

11/
You're paying less than ever for a home that's worth more than ever, but that's a spillover effect of the main show, which is the process by which millions of Americans were robbed of their homes and then moved into high-priced slums to the benefit of the 1%.

12/
Both Obama and Trump have boasted of the economy's performance since QE, pointing to soaring share prices - share prices that are totally decoupled from company performance. Companies lose money and still gain value.

14/
Investors understand that consumers have no money, due to rising housing costs plus crashing wages, largely thanks to the "gig economy," a polite term for "worker misclassification."

15/
Companies that get bailouts would be stupid to spend the money on jobs or new productive capacity to make stuff no one can afford to buy. Instead, they buy their own shares and declare dividends, driving up share prices.

16/
We have seen an incredible market bull-run since the Great Financial Crisis, a run that has largely continued since the pandemic. It's the other asset bubble: a bubble in investment assets.

17/
Corporate leaders claim responsibility for these rises, but the reality is that it's the predictable result of bailing out banks and companies rather than workers and homeowners.

18/
Société Générale's analysts say that about half of the stock market's gains since 2008 can be attributed to QE.

By driving down bond yields, quantitative easing has driven a large chunk of stock-market gains since 2009, but the impact varies widely across U.S. indexes,...

20/
This is how the super-rich got even richer, before and after the pandemic. It's also why the tiny minority of Americans with adequate retirement savings saw them swell - it's another spillover effect of the great upward transfer of national wealth.

21/
Why does all of this matter now? Well, between my writing my first paragraph and this one, Biden was declared, giving us what the Biden campaign signalled would be "Obama's third term."

22/
Biden has a long track-record of giving legislative gifts to the finance sector at the expense of the American people. They called him "The Senator from MNBA" for a reason.

Biden and Elizabeth Warren have been fighting each other since the 2005 bankruptcy bill.

https://www.gq.com/story/joe-biden-bankruptcy-bill
If he addresses this crisis the same way that he did in 2008 - the way that Congress and the Senate addressed the crisis in 2020 - by bailing out finance, not the public, we're seriously fucked.

Sure, the stock market will continue to rise and rise, as will house prices.

24/
If you are in the 1%, you will get SO MUCH richer. If you're in the 10%, your retirement savings will swell, your mortgage will get cheaper, and your house's value will go up.

For everyone else: evictions, foreclosures, soaring rents, worse wages.

26/
As Prop22's promoters remind us: Gig work is the new unemployment benefit: it's a private-sector jobs guarantee, work you can get at the tap of your screen. It's a perfect labor market - workers effectively bid to offer the best price to perform servant work for others.

27/
The more workers there are, and the more desperate their situation is, the lower the payments go. A lot of those savings are siphoned off by the (money-losing, stock-soaring) gig companies, but some of it is passed onto customers.

Since the Reagan years, neoliberal regulators and lawmakers have hewed to a radical anti-monopoly theory called "consumer harm." Under "consumer harm," monopolies are only a problem if they drive up prices.

29/
Since gig companies lower prices, they are totally kosher - even if they secure monopolies through predatory pricing.

But there's an even more insidious side to "consumer harm" and the gig economy.

30/
Misclassifying workers as independent contractors converts a brutally exploited workforce into a collection of "small businesses." If they get together and demand higher wages, THEY violate the consumer harm standard. They're a group of companies fixing prices!

32/
Giving trillion to the rich created inflation in the things that rich people buy: our houses (out from under us) and stocks.

Now, imagine what a #PeoplesBailout could do.

33/
Imagine replacing the gig economy job guarantee (a workfare program with no workplace protections, job security or minimum wage) with an actual Job Guarantee as described by the economist @ptcherneva:

35/
Would that be inflationary? Recall that inflation is what happens when the number of buyers goes up and the supply of things they're buying doesn't keep up. Inflation is the result of bidding wars.

36/
For a jobs guarantee to be inflationary, there would have to be a bidding war for the US workforce. That is the opposite of what we have now.

Jobs not galore. And the target keeps moving.

https://wolfstreet.com/2020/11/06/picture-emerges-of-a-weird-recovery-to-still-historically-awful-levels/
The reason no one wants to buy Americans' labor is that no one has any money to buy the things Americans make with their labor. The only people with money - the wealthy - primarily buy our homes out from under us, and stocks.

38/
QE for the wealthy has made the economy incredibly perverse. Productive companies are being driven to bankruptcy by gig economy companies that lose money. Millions of workers compete to provide services for the lucky few, for dwindling wages.

39/
Workers can't afford to buy stuff so companies have no reason to make stuff and so they become finance grifts, until they collapse, like Hertz did (after it converted itself from a car-rental company to an accountancy trick company):

40/
The gig economy jobs guarantee can't last. Eventually the number of workers bidding to serve the wealthy will exceed demand by such a wide margin that wages turn negative - the depreciation and payments on your gig economy car will exceed your income.

Paying workers good wages to do productive things that their communities need will create demand for the thing companies have decided not to make anymore.

42/
In other words, it will enable companies to make profits again, and it will drive out the companies whose share prices soared on the expectation of losses (accompanied by dividends and buybacks). It will dampen the stock market, but improve the economy.

43/
This will mean the end of those spillover effects - soaring house-valuations and 401ks for the lucky few - but those came at a VERY high price - vast un- and underemployment, the gutting of the productive economy, crushing debt for the majority.

44/
America bought those house price rises and 401k gains at a steep price: it cost the nation its resilience and political stability.

If the goal of QE was to secure middle-class Americans' retirements, it was spectacularly wasteful.

45/
A tiny fraction of QE's trillions went to middle-class retirements, while the vast majority went to making the 1% far, far richer. Most middle class Americans still don't have secure retirements - their dotage will be spent competing for gig economy jobs.

46/
For the price of QE, the US government could simply have guaranteed the necessities of retirees: shelter, food, care. This spending would crowd out jobs, sure - the worst-paid, most precarious jobs, from fast food to gig economy "jobs."

47/
It would make America into a country of secure and prosperous people, instead of food-delivery drivers and dog-walkers.

48/
12 years of finance bailouts and 0 years of People's Bailouts have only exacerbated this, and the pandemic metastasised it.

eof/
You can follow @doctorow.
Tip: mention @twtextapp on a Twitter thread with the keyword “unroll” to get a link to it.