- let’s see how he uses Tesla to teach the German competition what to fear and what makes the company so successful https://www.nzz.ch/wirtschaft/elon-musk-wie-tesla-der-deutschen-konkurrenz-das-fuerchten-lehrt-ld.1577928
Elon Musk: Wie Tesla der deutschen Konkurrenz das Fürchten lehrt

https://www.nzz.ch/wirtschaft/elon-musk-wie-tesla-der-deutschen-konkurrenz-das-fuerchten-lehrt-ld.1577928
What are the success factors of Tesla that have enabled the company to make the competition look so outdated ?

When Tesla slowly became known to a wider audience, climate change was still a theoretical construct for many people
For managers at BMW, Daimler and Volkswagen the idea of battery cars was at best a technical gimmick

Recently Musk even announced an electric car for the equivalent of just over € 21,000
In the meantime, the challenger from California may still be a niche player but in the field of electromobility the company of founder, CEO and major shareholder Elon Musk is the market leader - and teaches established carmakers to fear
What makes Tesla so powerful in comparison with the top dogs of the car world from Detroit, Munich, Stuttgart and Wolfsburg to the Japanese city of Toyota ?
INNOVATIVE STRENGTH AND ENDLESS WILLINGNESS TO IMPLEMENT

Born in South Africa, Musk is characterised by vision, foresight and responsibility, whereas with established manufacturers until recently a manager had to have "petrol in his blood"
Musk's greatest strengths are probably his perceptiveness, his innovative power and his endless will to implement

Everything that Musk tackles seems to turn into a success - be it the payment provider Paypal, the space company SpaceX, the numerous smaller projects or even Tesla
And the company from Silicon Valley approaches tasks in a completely new way - just as many of the successful start-ups from the region have done and developed into global corporations
OWN OPERATING SYSTEM

Like many mobile phone manufacturers, Tesla has its own operating system and thinks from its own software, as Stefan Bratzel from the Center of Automotive Management in Bergisch Gladbach explains
This is why the software and the digitalisation that comes with it are the second factor in the company's success
The company's expertise in new electronic architectures, their programming, wireless updates, the associated security requirements and the networking of the car with the cloud is crucial here
At any rate, this is how Elmar Degenhart, the boss of the major supplier Continental, analysed the uniqueness of Tesla

Musk has created a smartphone on four wheels, which, put simply, is controlled by a chip that is the brain of the car
The suppliers can dock to Tesla's operating system via interfaces

So in Palo Alto, the developers have been able to build a car around the software based on their own program codes

German manufacturers, on the other hand, have hardly written any software themselves to date
Instead they let their major suppliers provide the software and then they have to combine the different architectures

During the production of the purely electric car ID.3, which like a Tesla has been given its own operating system, serious problems with the software occurred which delayed the start of deliveries
BETTER RANGE WITH THE SAME BATTERY SIZE

The third competitive advantage is the battery or battery cell

This is already reflected in the company's positioning 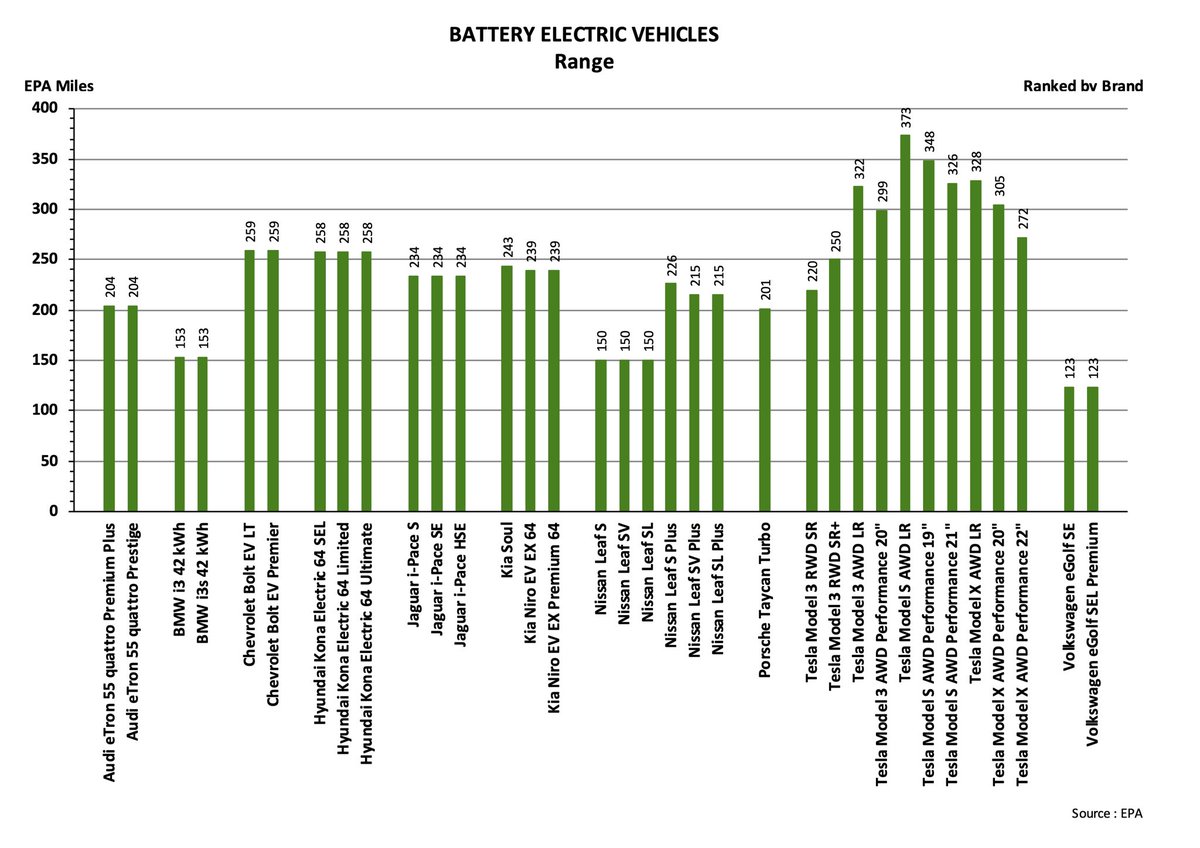 While the German suppliers are active in the production of automobiles, trucks and motorbikes and offer financial services, Tesla is active in three areas: automotive engineering, solar industry and energy storage
Tesla's access to the essential battery technology is therefore quite different from that of the established car manufacturers

Thanks to a clever combination of software and battery, Tesla is able to achieve a better range for its vehicles with the same battery size
Many experts now believe that Tesla is several years ahead of its competitors in battery production

This applies, for example, to the control system, the much lower demand for the controversial element cobalt for the cell and the costs of production
Although Tesla also purchases the battery cells from Panasonic, LG and CATL, it has a decisive role in the development
Former Audi head of development Peter Mertens recently made the same assessment in an interview with the trade magazine "Auto, Motor, Sport" :

In the meantime, however, they are catching up, some of them are getting into battery production themselves and deepening their knowledge of the chemical processes in the cell
A GIANT ON THE STOCK MARKET 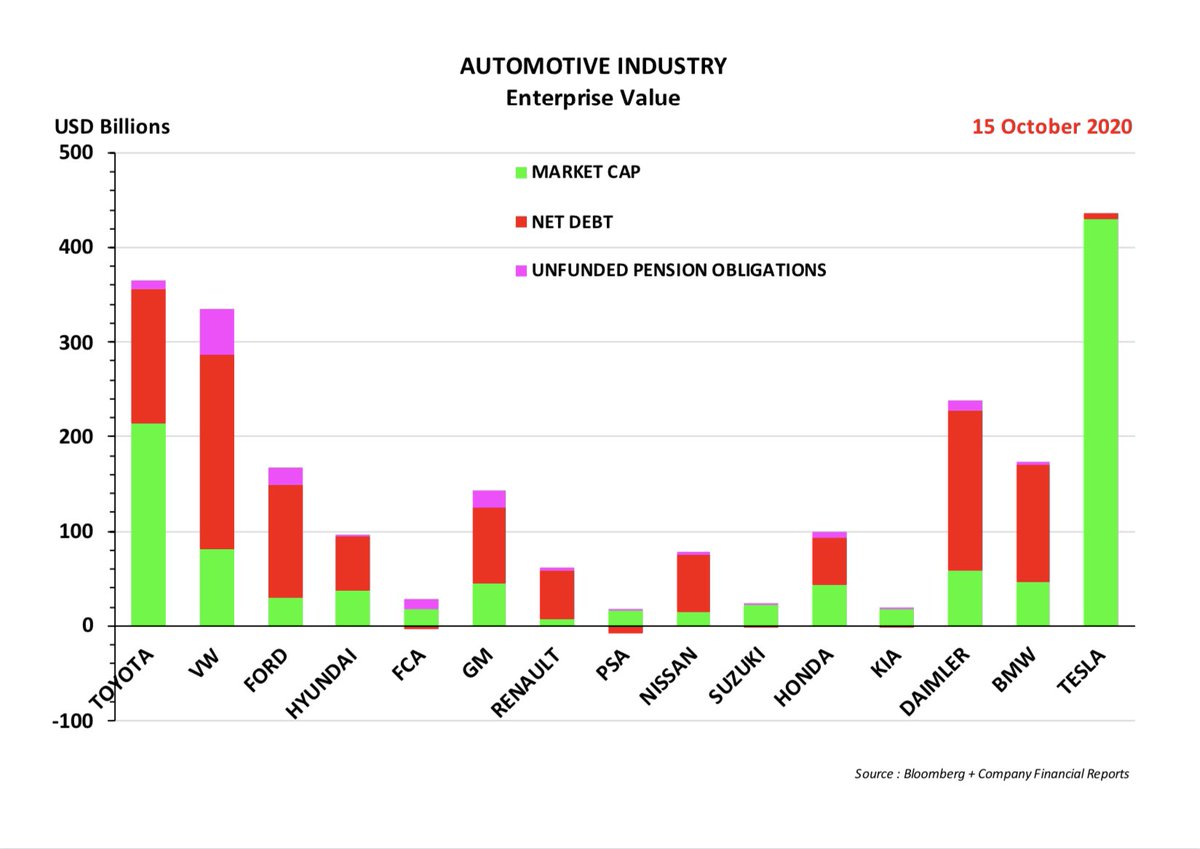 By 2014 Daimler had sold the last shares of the package 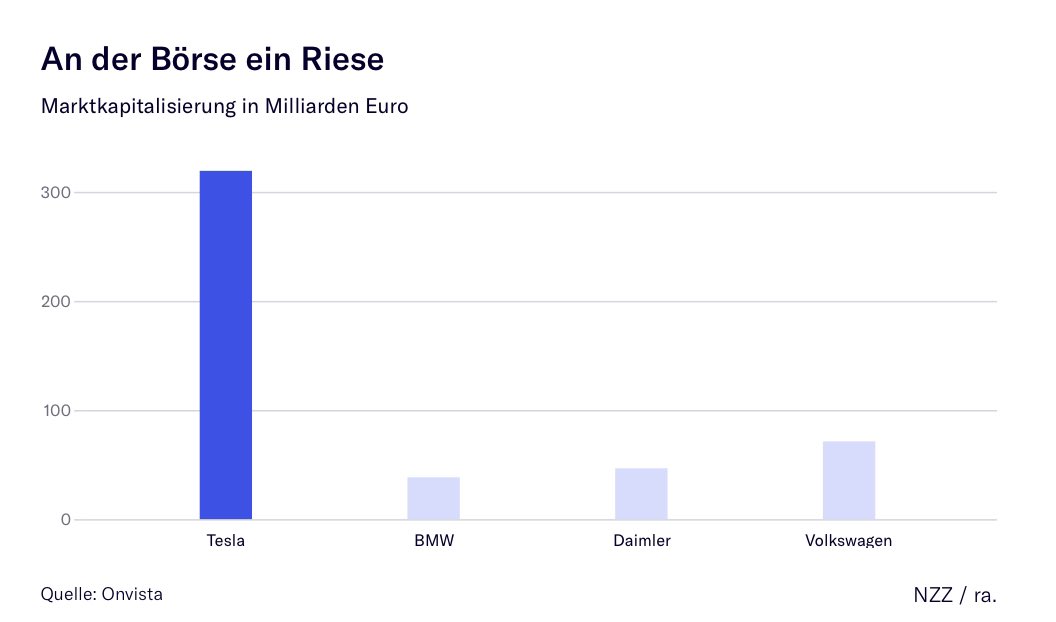 Even today, German manufacturers are still clinging too strongly to old patterns of thinking

Founded in 2003, the company was virtually created and grew on a greenfield site, never produced combustion engines and never had a successful legacy business model to protect
This has enabled the developers and engineers in Palo Alto to approach all tasks unencumbered and to completely rethink the electric car from the very beginning
The opposite is true of the established competition, which has been successful in the construction of petrol and diesel engines for more than a hundred years, and had become increasingly specialised and with narrowly-optimised production methods
While Tesla constructed a completely new platform for the electric car, the established manufacturers at the beginning usually only converted their existing vehicles to electric cars
The Audi E-Tron is basically based on the Q5, the Mercedes EQC on the GLC and the E-Corsa from Opel on the traditional Corsa

This meant that the engineers always had to make compromises, because the vehicles were never intended to be electric cars
One example is the existing transmission tunnel that divides the interior of each vehicle

Now the approach is changing

- the Premium Platform Electric PPE kit
A Porsche Taycan based on the PPE does not have to hide behind a Tesla in terms of chassis, charging technology and workmanship

On the contrary, strong competition is growing here
CONVERSION FROM HARDWARE TO SOFTWARE ORGANISATION

The hardware in terms of the production of the car will always remain a very important core competence
But software is now becoming a differentiating feature that is increasingly important, generating customer data and guaranteeing access to the customer
It will also be decisive in terms of semi-autonomous and, at some point, completely autonomous driving because the vehicles will then have to process enormous amounts of data
THE BRAND

In the meantime, the Tesla brand, fifthly, has also become an important competitive factor

Elon Musk has managed to position Tesla as a global premium brand in just seventeen years
Toyota for example with its luxury brand Lexus, and Nissan with Infiniti have never succeeded in doing so despite considerable efforts

Especially in Europe, Lexus and Infiniti have remained pure niche brands to the present day
A DWARF IN TERMS OF SALES 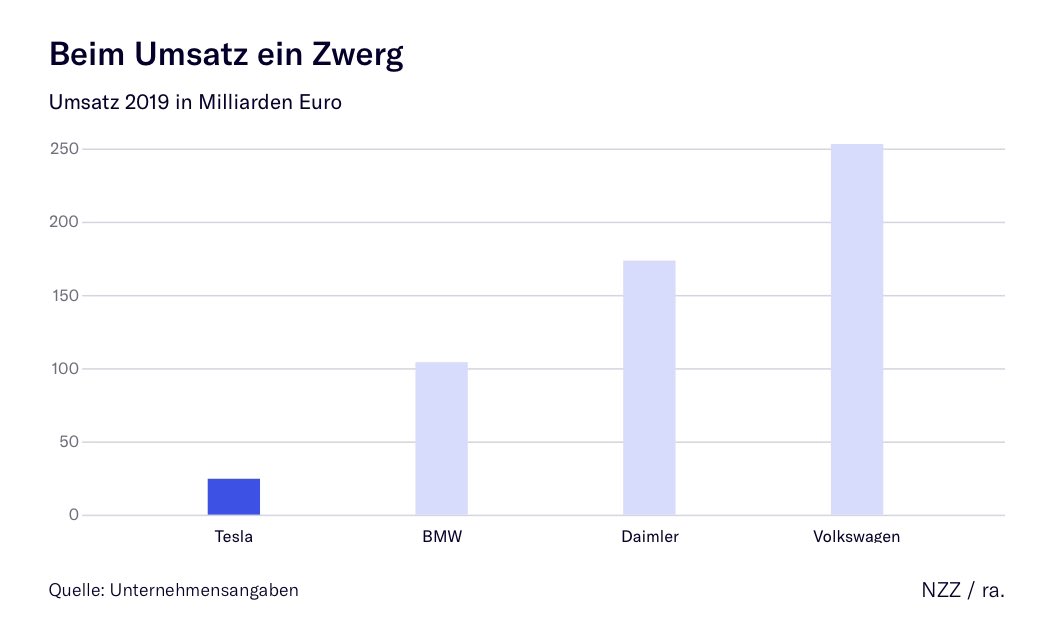 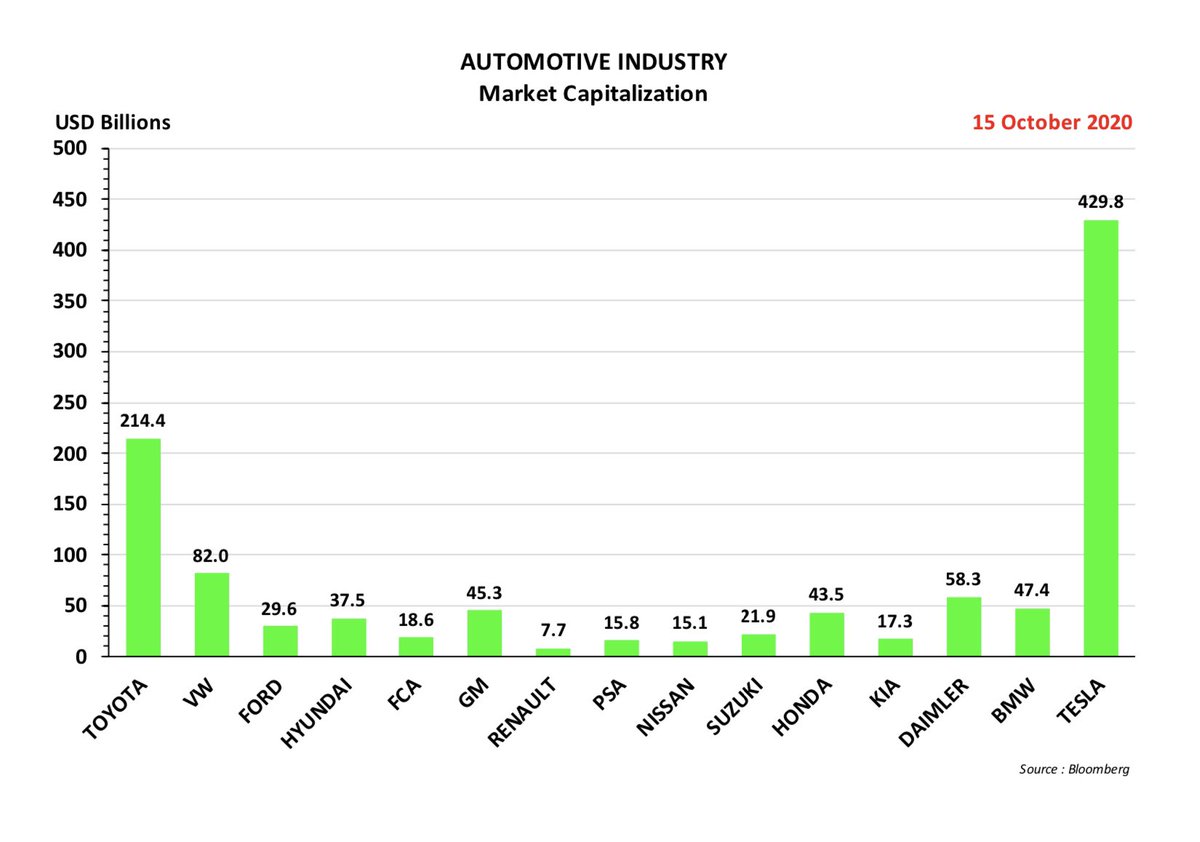 Although Tesla will be able to defend its lead for some time to come, the intensity of competition will increase considerably

Conversely, the incumbents should not hope that Tesla will weaken and become sluggish 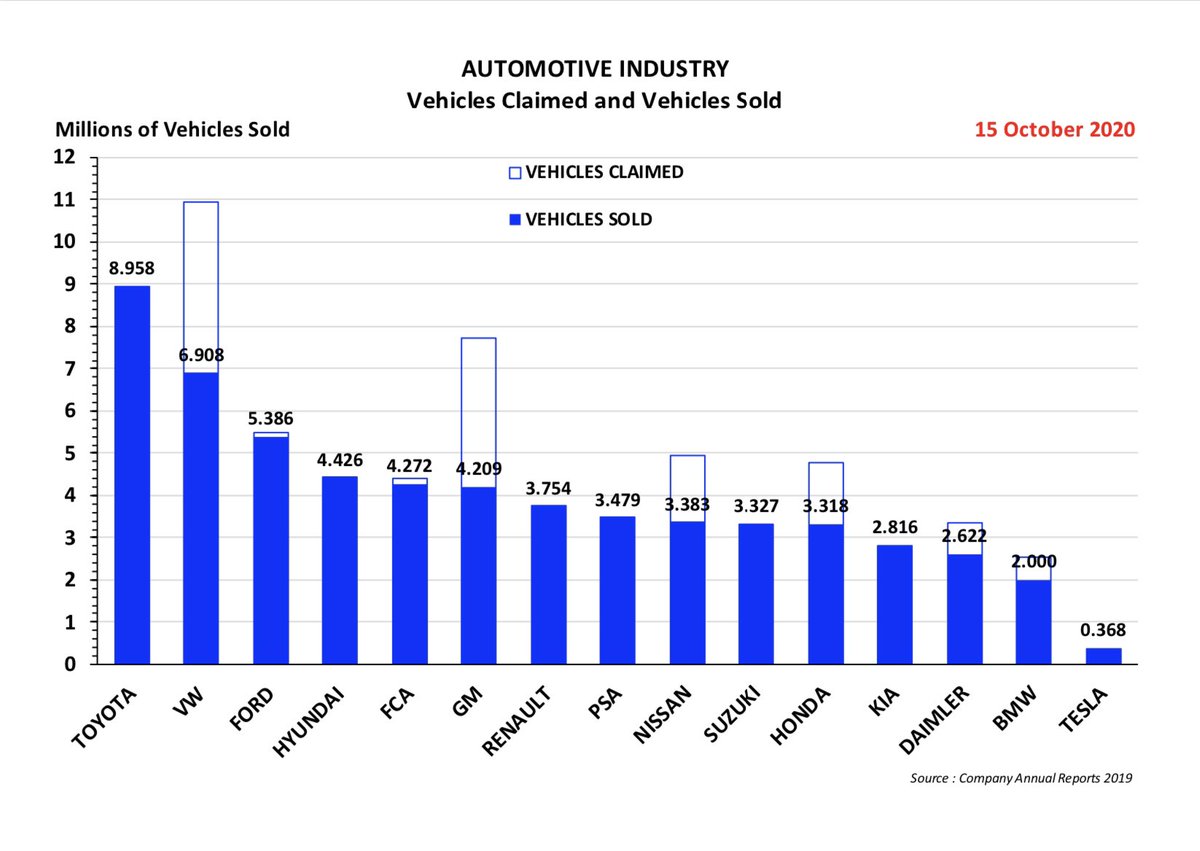 Car expert Ferdinand Dudenhöffer from the Center Automotive Research in Duisburg sees this as a revolution in car production
In addition, Musk and his neurotechnology company Neuralink, founded in 2016, are working on a brain-computer interface that will enable the brain to communicate with a computer

Anyone who thinks so has already lost, because this underestimates Elon Musk, who is followed on Twitter by around 39 million people

But Musk is both Tesla's greatest strength and weakness
Probably no other company depends so much on the good and bad, the ideas and the moods and the intensity of the will to implement them of its CEO

The Californian automaker benefits immeasurably from this, but it is also a huge cluster risk
You can follow @jpr007.
Tip: mention @twtextapp on a Twitter thread with the keyword “unroll” to get a link to it.