Read on Twitter
1/ Thread: We're going to end up with blended learning, its just a matter of how?
Over 6k schools with confirmed outbreaks
Government figures say 50% of secondaries with partial closures due to isolations.
Remember government didn't intend on closing schools in March.
2/ The main reason schools closed in March was because DfE realised that with CEV shielding and isolations and sickness escalating education settings were at the brink of closing anyway due to unsafe staffing numbers. https://twitter.com/karamballes/status/1262064976195457026?s=19

3/ This is where we are heading, a disorganised introduction to blended learning, the rotas randomised by who is impacted by outbreaks, most likely creating unmanageable workloads.
Worst of all at the cost of amplifying transmission in the community and the health of staff
4/ The issue of outbreaks in schools is still being ignored by the media.
Government PHE report was held up as a claim schools would be safe, all it shows is that schools are safe when there are low student numbers and social distancing https://twitter.com/karamballes/status/1298018784104546304?s=19

5/ When government backed down on much of its plans for wider opening in June there were a lot saying 'but other countries managed it', 'What about Sweden?'

6/ German and Norway have put in many measures, smaller class sizes, now telling students to wear masks in the classroom etc, schools are priority for testing and serious consideration is made for asymptomatic spread.

7/ New York schools are being seen as a model for rest of the US to follow, blended learning rotas and regular testing, and rapid large scale isolations in response to positive cases to cut asymptomatic transmission chains. https://www.nytimes.com/2020/10/19/nyregion/schools-coronavirus.html#click=https://t.co/IPeasw3FvQ
Surprising Results in Initial Virus Testing in N.Y.C. Schools

The absence of outbreaks, if it holds, suggests that the city’s efforts to return children to classrooms could serve as an influential model for the nation.

https://www.nytimes.com/2020/10/19/nyregion/schools-coronavirus.html#click=https://t.co/IPeasw3FvQ
8/ Denmark were also regularly held
up as an example by the media to
attack what they claimed was
failure to engage by the unions.

Denmark introduced the
constructive measures our unions proposed. They opened up additional spaces for smaller classes
9/ SAGE told the government education staff in all settings are "at higher risk of infection" they stated the need for social distancing and that aerosol transmission needs to be carefully considered.

10/ In late spring UEA released a report funded by PHE to look at the impact of lockdown measures by analysing data from 30 European countries.

Schools closures and banning mass gatherings were found to have the greatest impact on reducing transmission. https://www.expressandstar.com/news/uk-news/2020/05/06/new-study-reveals-blueprint-for-getting-out-of-covid-19-lockdown/
New study reveals blueprint for getting out of Covid-19 lockdown

The researchers looked at the number of cases and deaths taken from daily published figures by the European Centre for Disease Control.

https://www.expressandstar.com/news/uk-news/2020/05/06/new-study-reveals-blueprint-for-getting-out-of-covid-19-lockdown/
11/ Recent study in the Lancet looking at many countries estimates schools returning have on average increased infections by 24% https://www.thelancet.com/journals/laninf/article/PIIS1473-3099(20)30785-4/fulltext
The temporal association of introducing and lifting non-pharmaceutical interventions with the...

https://www.thelancet.com/journals/laninf/article/PIIS1473-3099(20)30785-4/fulltext
12/ After a great initial response to Covid Israel were one of the first to attempt a return to full schooling, took around a month before they were all shut again, lack of masks and social distancing proved a disaster. https://twitter.com/yaneerbaryam/status/1318917775449034753?s=19

13/ Some in the media pointed to France, saying that they hadn't done much to reduce class sizes, though they had smaller classes than UK to begin with.

14/ Pub curfews and some of the Tier measures are said to come from Belgium. We are a couple of weeks behind their curve and they are now running out of keyworkers including teachers, the same is going to happen in the UK, particularly England.
15/ So the UK doesn't really have a choice about blended learning over winter, its going to happen, the only choice they have is if it happens as a measure to reduce transmission or as a result of outbreaks? https://twitter.com/DrZoeHyde/status/1320705169005318146?s=19

16/ Government has required all schools to have remote learning in place (although they have broken their promise on laptops), blended learning is covered in their Containment Framework, although according to Nick Gibb they currently have no intention of using the Framework
17/ So we are ready to move on this, considerably more organised than we were on March when it was dropped on us without warning.

Interesting to know the governments thinking on this and masks in classrooms, I imagine behind closed doors there's several differences of opinion
18/ Changes require accepting mistakes were made, the problem is if the government does this it also has to acknowledge that scientists warned of the risks and government chose to ignore that advice.
19/ I believe the decision to ban masks in classrooms was based entirely on public perceptions, initially gov opposed lockdown because they thought compliance would be low, this proved wrong however they then started worrying that the public had gone to far the other way and now
20/ were worried people would stay
at home rather than stimulating
economic activity, hence Eat Out to
Help Out, same for masks, wearing
them accepts risks, gov
spent 3 months telling us there
were no risks,protecting party PR
comes before educators and
communities health
21/ There are worse alternatives, @globalhlthtwit at @IndependentSage pointed out last week that if he was going to adopt a herd immunity strategy then banning masks would be a measure to take.
ISAGE support blended learning where infections are high.
22/ Not saying gov is pursuing a herd immunity strategy, TBH it doesn't appear they have any strategy however I wouldn't be suprised if they were taking a middle ground approach to lockdown vs letting it rip and hoping that herd immunity will be the end result
23/ Though this interview in Holland shows that supporters of a herd immunity strategy see keeping schools open as an important part of the plan, allowing the generally less susceptible get infected and to spread it through the community. https://twitter.com/DrZoeHyde/status/1321017142578352129?s=19

24/ SAGE have modelled that moving to blended learning would have a greater impact on cutting RO than closing all pubs and hospitality, business could stay open with the right measures, infections could drop and we avoid a lockdown.

Blended is also the right choice economically
25/ Shame I didn't start writing this a bit later.

More new evidence showing the impact of schools on infection rates on Israel has just appeared in my timeline https://twitter.com/DrZoeHyde/status/1321078130400870404?s=19

Schools make a big difference, there is an economic argument to be made for a shorter sharper lockdown. 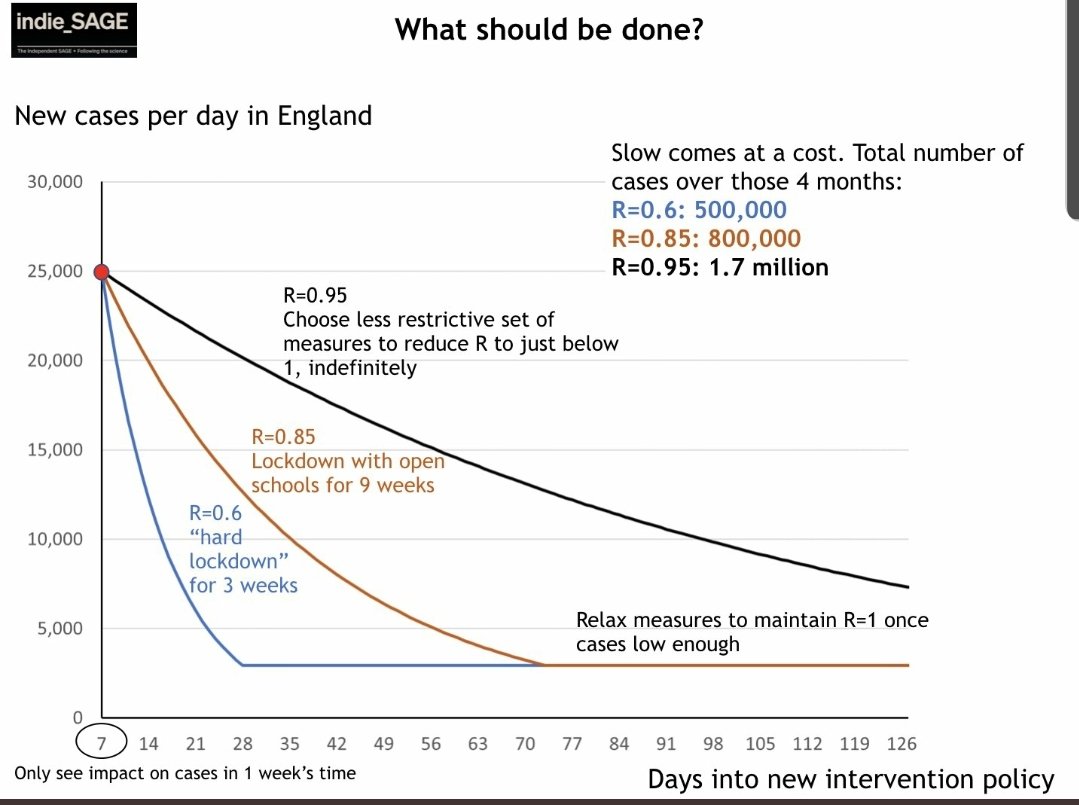 27/ SAGE Scientist speaking today,
Increase in women aged 20-40 being hospitalised due to increased exposure at work. Education workers and parents. 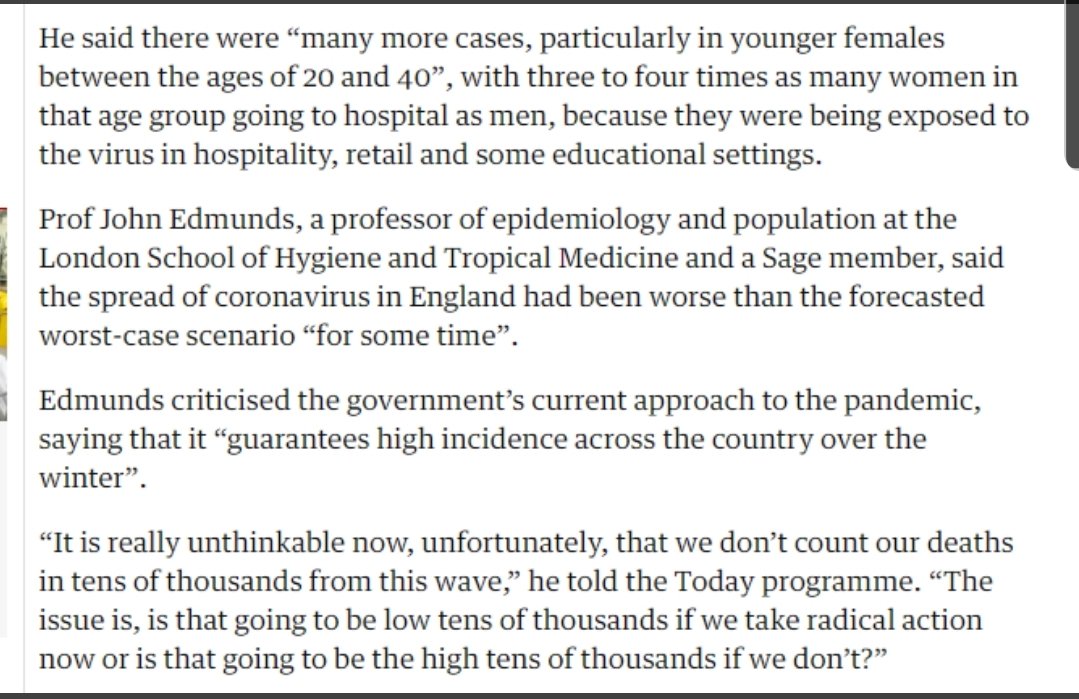