About how, though he's the only lens we get on what Klingon culture is "supposed" to look like, somehow, we never meet other Klingons who live up to his expectations. Who never live up to his example.

Because he's a true believer. He bought in./
He's not truly /from/ Klingon culture; he's actually a straight-laced Russian guy with an anger problem. All he knows is the myths.

The stories the culture tells about itself.

So he believes that, in order to be truly Klingon, he must live up to them. Mostly, he does. /
He is *constantly* let down by his faith in his people.

He is *constantly* surprised to find out that they're without honor.

Because he doesn't realize that the myths are myths.

Follows the rules, believes other people, doesn't understand the dishonest subtext of the myth. /
It's hard for me not to read ADHD/ASD rule-following and trust into him, given that.

Hard not to recognize, in him, my own behaviors. The way that I buy in. /
I'm a Southerner. When I grew up surrounded by talk of Southern Hospitality, of helping people in need, of being there as a community?

And because I never picked up on the subtext of "Except for THOSE people," I was shocked, every time I ran into it. /
When a whole bunch of people who "didn't have a racist bone in their body" behaved differently to me when I dated a black girl in high school?

I didn't understand. I didn't get it.

Because the quiet part they don't say is about what kind of people are "our folks." /
The same way I can't process rhetorical questions, the same way I don't pick up social cues.

I didn't pick up on the racism. Because it was everywhere, but quiet. Unexamined. /
I'm remembering a coworker from Charlotte. We'll call him Jay.

Jay and I were *super* similar. This is in my 4chan days (again, buying in - free speech! Expression, judged on its own merit, without identity or consequence - just pure information!), and we had a common language./
I remember the "everyone can be mocked, it's fine" ethos, and I remember us building a homebrew magic set together. "Cishet Scumlord" sounded like it would probably be a legendary Blue/Black creature, we went from there.

I slowly realized? Every joke was aimed in one direction./
I understood it as "hey, let's poke fun at every internet community." It very much didn't go that way, though.

I remember during g*merg*te, when he described his "issues" with the "industry." I proposed some solutions that handled them, while also protecting vulnerable folks. /
He was, to say the least, uninterested in them.

I realized that he wasn't joking.

I'm sorry I gave him so much time. /
Because, like Worf, I'd bought in. There's an honor there, in the myth Chan culture tells about itself.

We took down sex trafficking rings, brigaded the klan, did a fair bit to mess with a to-remain-nameless "church."

But I've long since stopped buying that myth. /
I'm the lesser for having bought into it. That said, I think the world's the lesser for it not being true.

Likewise, our Southern myths. /
But this is about Worf. This is about Star Trek. And like all the best speculative fiction, Trek asks questions about who we are, and who we want to be.

The last five/ten years leading up to this election has laid bare exactly how many myths folks were clinging on to.

"Standards" and "civility" come to mind. I'm sure you have a few yourself.

Worf teaches us something, though.

Myths have power if you wield them. In the hands of a P'tagh, they're ruinous. /
And in the hands of someone who means well, but doesn't truly believe? 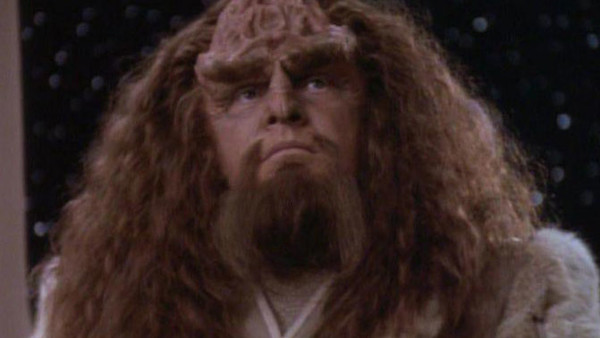 Myths give you something to live up to. To live into.

You make them real, even if nobody else is living up to them. /
So when my Southern peers and authority figures taught me their myths, I learned them. When the scout troop taught me more, I learned it. When people talked about the promise of America, I believed it.

And on a certain level, it doesn't matter that they were all lying to me. /
They can go fuck themselves, I don't care that they never lived up to it.

I'm certainly going to try to. /
And if the promises they taught me to hold dear need work to be fulfilled?

I will stand in the smoking ruin of the old world to work on bringing about the new.

Because I buy the myth. /
It's one in the morning; I'm being ranty and rambly and melodramatic, but apparently some of y'all are here for that.

So I'll end on this.

The women claw at you, and scream, and throw heavy objects?

And the men read them love poetry? /
That implies (Courtesy of @beamish_girl, who rt'd it from somewhere I can't find)

That gay klingon Men are just soft af, reading poetry at each other and yearning.

And klingon lesbians just go absolutely fucking apeshit on each other.

And I'm so fucking okay with that image. /
So I'll just leave you with that - the image of two soft himbo klingon warriors, each trying to out-poetry the other, not knowing who's going to take the first step and start clawing.

GOALS
There's a fair few people who've equated this to their experiences in evangelical spaces as well.

And as a Jesus Camp graduate... fuck, y'all. Same.

And there's also a point - much like Data, Worf seems to think that if he just follows the myth hard enough, he can be a REAL person. A real Klingon, in Worf's case.

If you've followed this late-night rant about Trek, and want another, I've got this on deck.