Read on Twitter
If Biden Wins, Russiagate Will Magically Morph Into Chinagate

The same exact low rumble, slowly rising toward the same fever pitch crescendo. First you get a few unexpected comments showing up in your notifications, then a few more, then a lot more, then a whole lot more.

It's Russiagate all over again.
The increasingly shrill shrieking from rightists about China having leverage over Biden is so similar to what I experienced from liberals at this exact point in time in 2016 about Russia having leverage over Trump. They get mad when I say it but it's true. https://twitter.com/caitoz/status/1320836475525578753?s=20

It's the same experience. It's exactly the same. 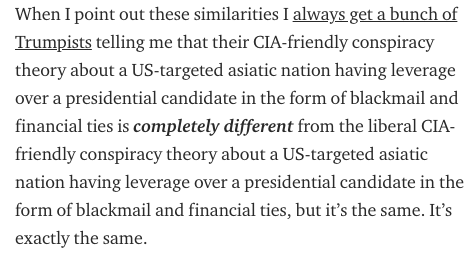 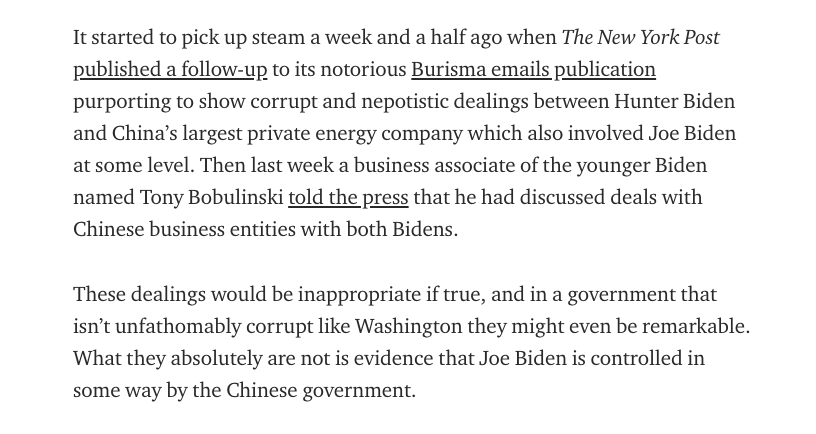 What the emails absolutely are not is evidence that Joe Biden is controlled in some way by the Chinese government.

Yet the notion that Biden may be owned by Beijing is being promoted by rightists like Nigel Farage and CIA applicant Tucker Carlson. https://theweek.com/speedreads/689969/tucker-carlson-tried-join-cia
Tucker Carlson tried to join the CIA

Fox News' Tucker Carlson was never any good at school. The conservative firebrand only managed to get into Trinity College, in Hartford, after his boarding school's headmaster — the father of his...

https://theweek.com/speedreads/689969/tucker-carlson-tried-join-cia
It’s no more indicative of covert loyalties to a foreign government than the Gish gallop of weak arguments presented for the theories of Trump’s loyalty to Moscow,

If Biden is elected we can expect to see these claims get louder and more shrill, surpassing the force with which Republicans pushed Benghazi many times over. It will dominate political discourse in the same way Russiagate has.

We can expect this to create political pressure on the Biden administration to escalate cold war aggressions against Beijing, which Biden will happily do since he is a virulent China hawk.

How do I know that last bit will happen? Because it's exactly what happened with Russiagate. https://caityjohnstone.medium.com/25-times-trump-has-been-dangerously-hawkish-on-russia-ada915b07f97
25 Times Trump Has Been Dangerously Hawkish On Russia

CNN has published a fascinatingly manipulative and falsehood-laden article titled “25 times Trump was soft on Russia”, in which a lot of…

https://caityjohnstone.medium.com/25-times-trump-has-been-dangerously-hawkish-on-russia-ada915b07f97
And of course neither Democrats nor liberal media platforms will have a moral leg to stand on to protest against these fact-free conspiracy theories, since they just spent four years doing the exact same thing.

And of course the only winners of this nonsense will be the spies and cold warriors who are driving it all from behind the scenes. 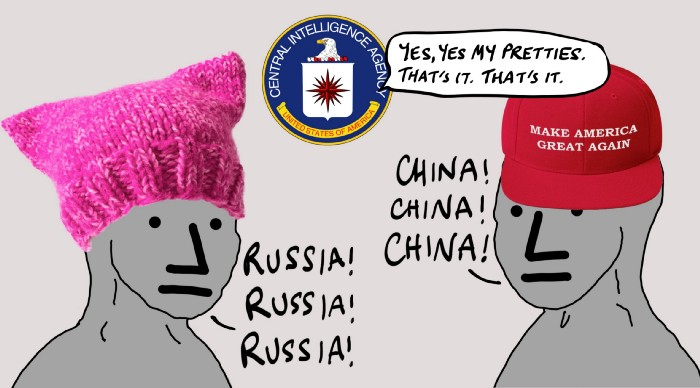 The goal of stopping the rise of China has been in the works for many years, and Joe Biden was part of the administration whose “pivot” laid a major part of the groundwork for that agenda.
https://www.aljazeera.com/features/2017/12/6/john-pilger-qa-us-missiles-are-pointed-at-china

Yet fact and narrative are so loosely related that no amount of evidence will dissuade the allegation that Biden is secretly a puppet of Xi Jinping, no matter how many economic sanctions and nuclear escalations he rolls out as president.
I was so looking forward to Russiagate being over and done with if Trump gets out, but it looks like I’m going to wind up accused of shilling for Biden and of being a secret CCP agent just like I’ve been accused of shilling for Trump and being a Kremlin agent for the last 4 years
Oh well. Russian agent to Chinese agent. I guess it’s good to change things up with a new career move now and then.
You can follow @caitoz.
Tip: mention @twtextapp on a Twitter thread with the keyword “unroll” to get a link to it.