Read on Twitter
So, it's probably worth talking about what is happening here, and why nuclear advocates in particular see absolutely no possible resolution to the issue of land use - and are particularly keen to try and incite fear / anxiety around the 'spread' of renewable energy. https://twitter.com/ShellenbergerMD/status/1320035587508690944

First of all: Shellenberger, and @envprogress more generally, make a constant habit of using *proper* misinformation - half truths, bad sources, deceptions etc - to make their case. It is a constant thing.

Eg: this graphic, which claims wind - 1000x land than nuclear: 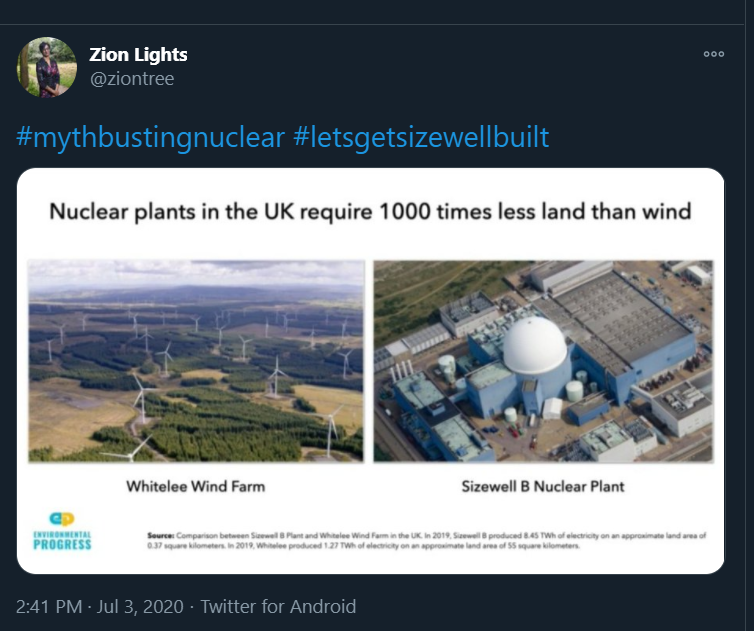 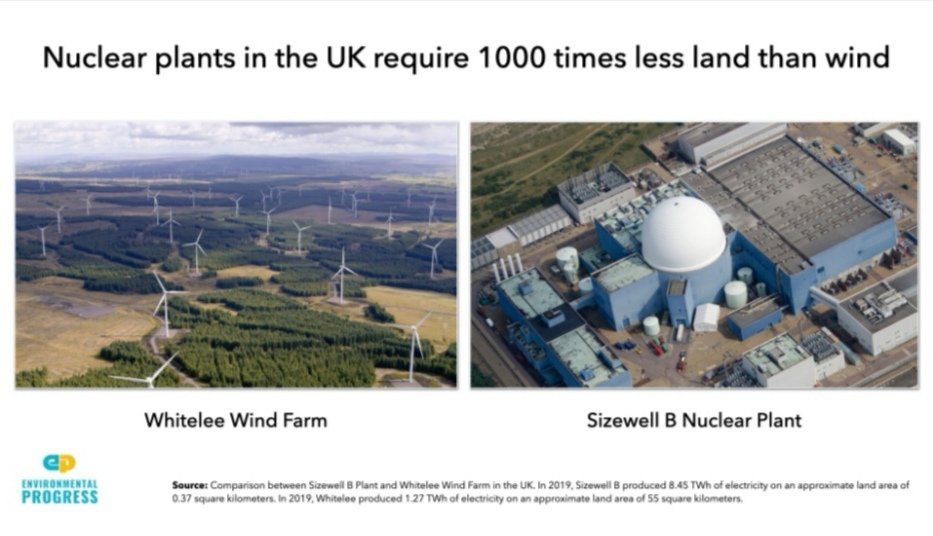 What they're doing there is assuming the *entire* area of the wind farm is unusable. But if you spoke to *anyone* involved w/ wind, you know it's a lie. Eg: Whitelee, in the pic, is constantly used as a public space. Are there any mountain biking tracks through the nuclear plant? 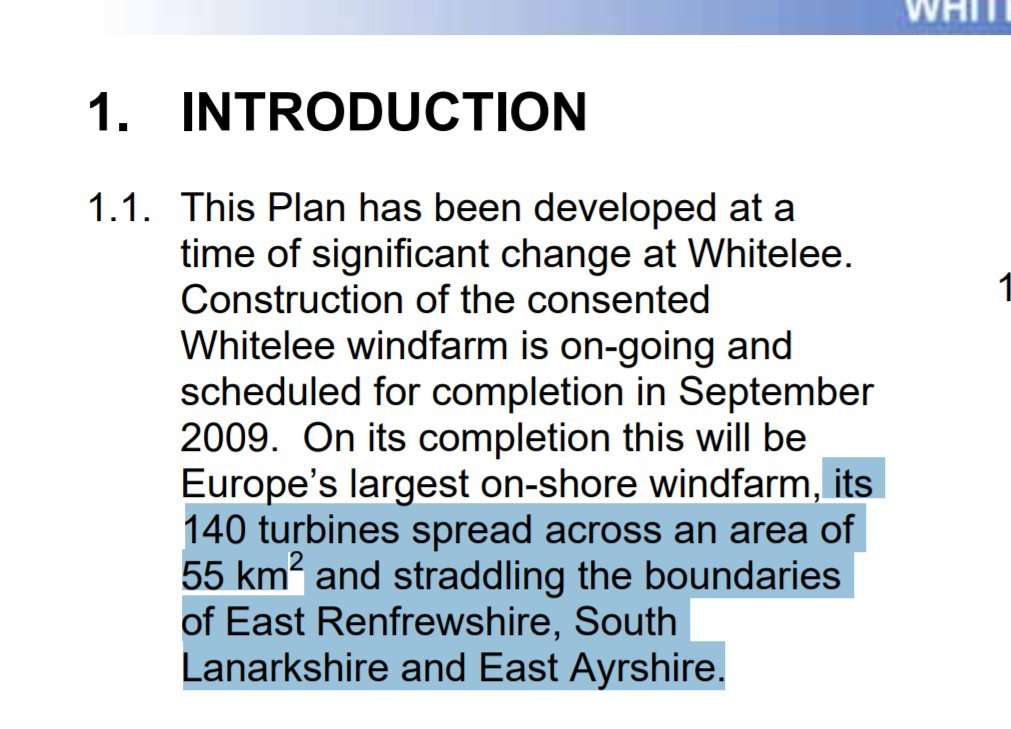 This isn't unusual. Consider another example: their website has this slide, which completely confuses 'capacity factor' with the amount of time that solar and generate power. Which, incidentally, is exactly the same extremely basic error that the 'Planet of the humans' crowd make 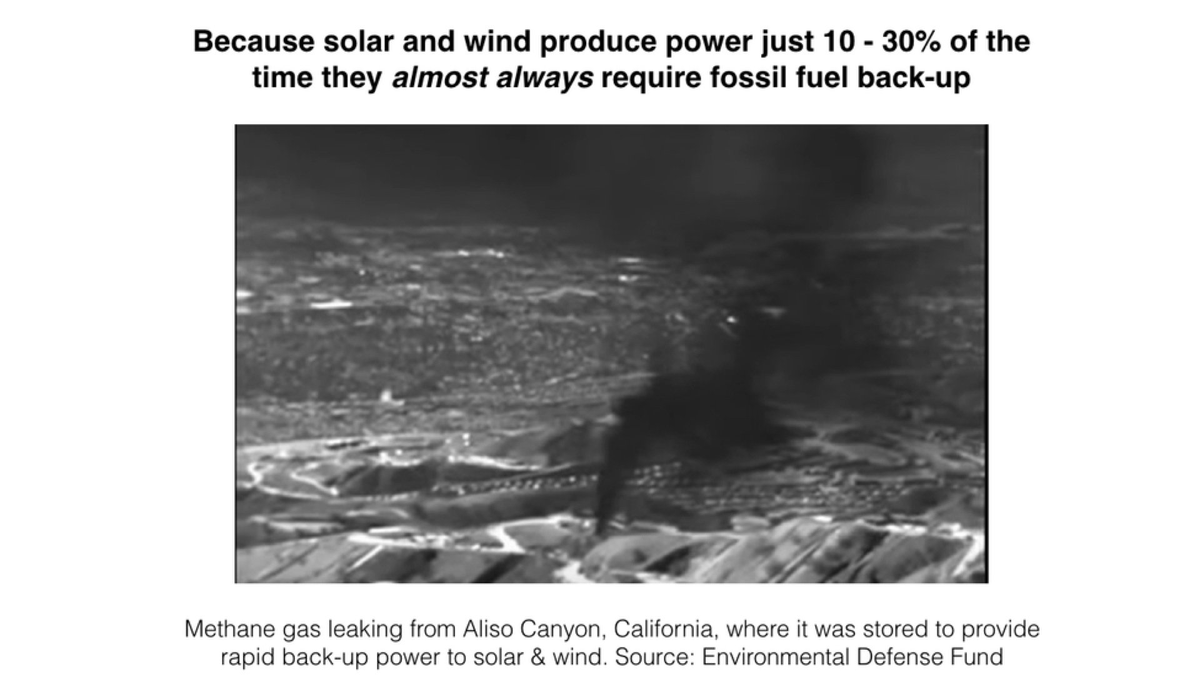 In fact, Shellenberger once *pretended* to have done a historical media analysis of a dodgy database of 'wind farms deaths' (created by an anti-wind group). I think this catastrophic array of problems illustrates something very important. https://twitter.com/KetanJ0/status/1277646790825820166

Advocacy of nuclear power has split into two factions: one that is 85% aggressively anti-renewables and 15% pro gas, and pro nuclear. The other doesn't spend time attacking renewables, and instead worries about addressing the *actual* problems with nuclear, unrelated to Wd + Sol
So! For Faction #1 - the anti-renewable faction - they will *necessarily* focus on two types of outlier projects, to maximise the "you should be scared of renewables" messaging:

- As old as possible
- As big as possible
And yep, the Les Mées Solar Farm in France is one decade old. 100MW today, due to efficiency increases, does *not* look like that. 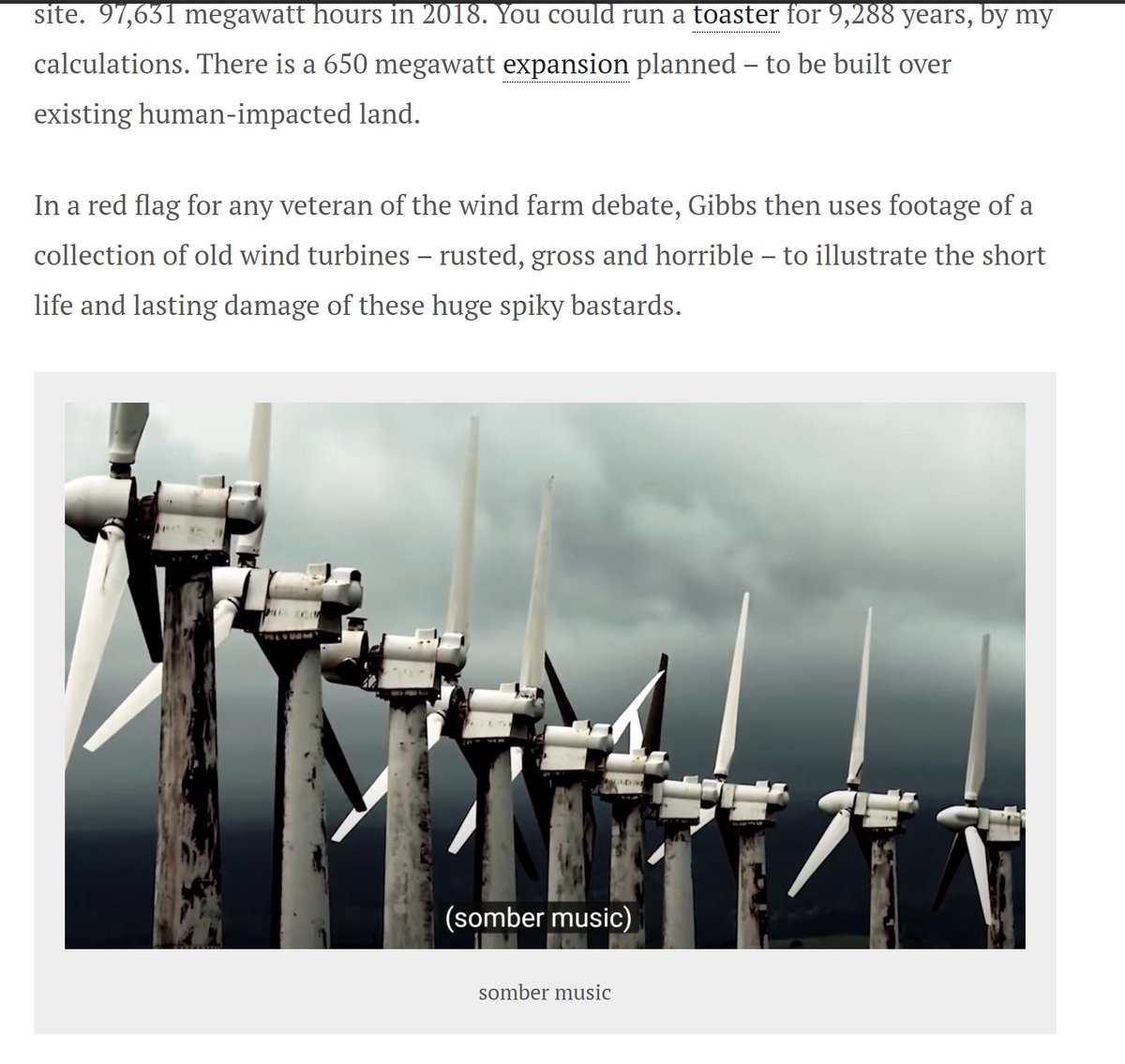 And hey - did you know that Australia has a solar generator that is 185 times the size, and looks absolutely nothing like that?

Yep, that's 18,500 MW on rooftops, buildings, car parks etc. Turns out we can *choose* where these projects go:
https://pv-map.apvi.org.au/analyses 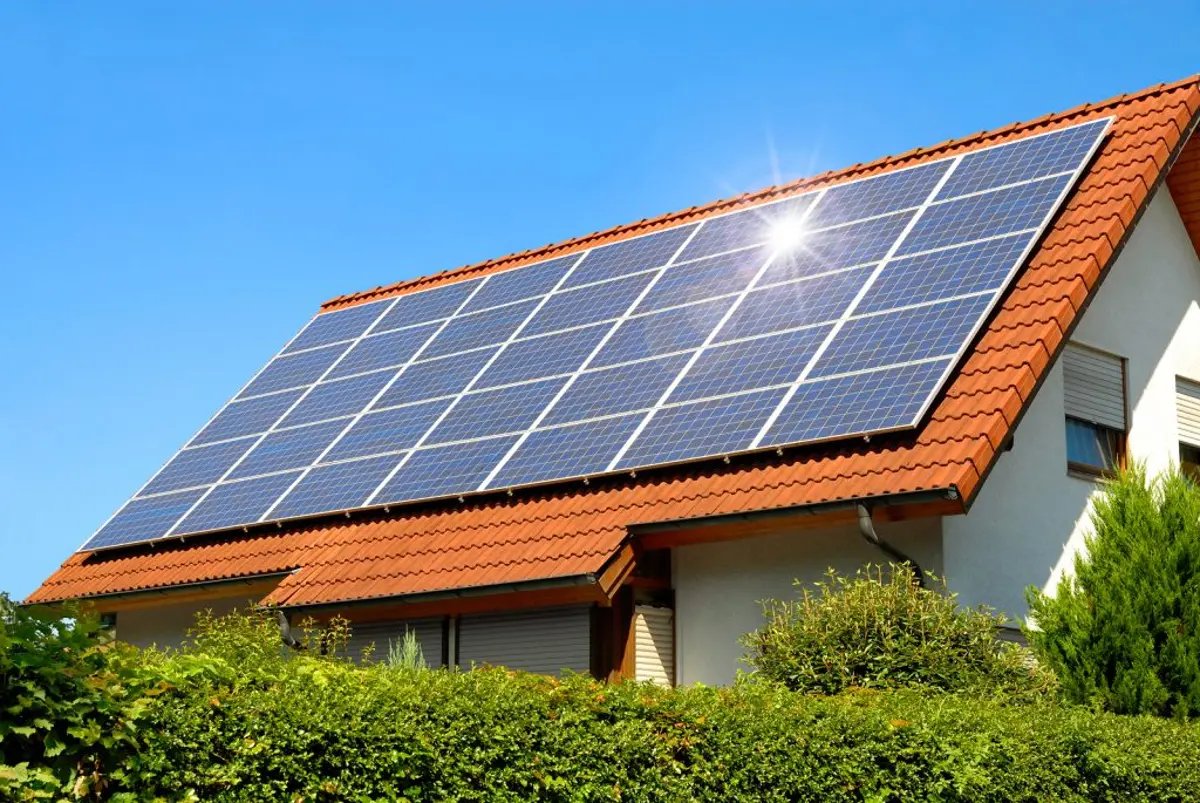 Guess what? The Les Mées Solar Farm was actually *developed* by the two local communes, who *chose* to develop that project, knowing exactly what the local environmental and visual impacts would be.

*choice* is the important thing here. 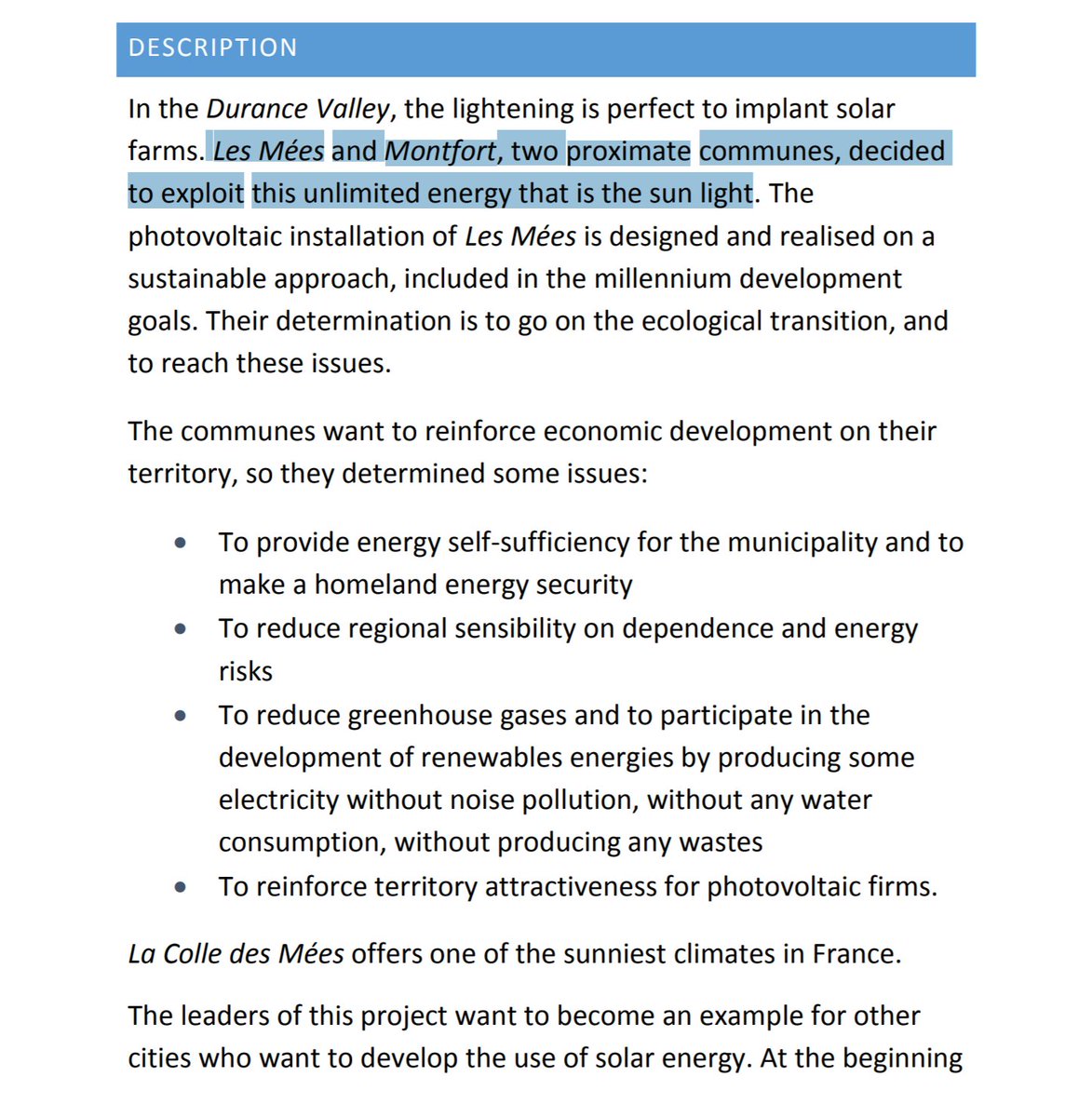 In fact, Les Mées was also specifically designed without concrete, and built on "land left fallow, abandoned by farmers", and included the addition of bee hives, and bee-forage plants underneath the panels. Remember: this is back in 2011 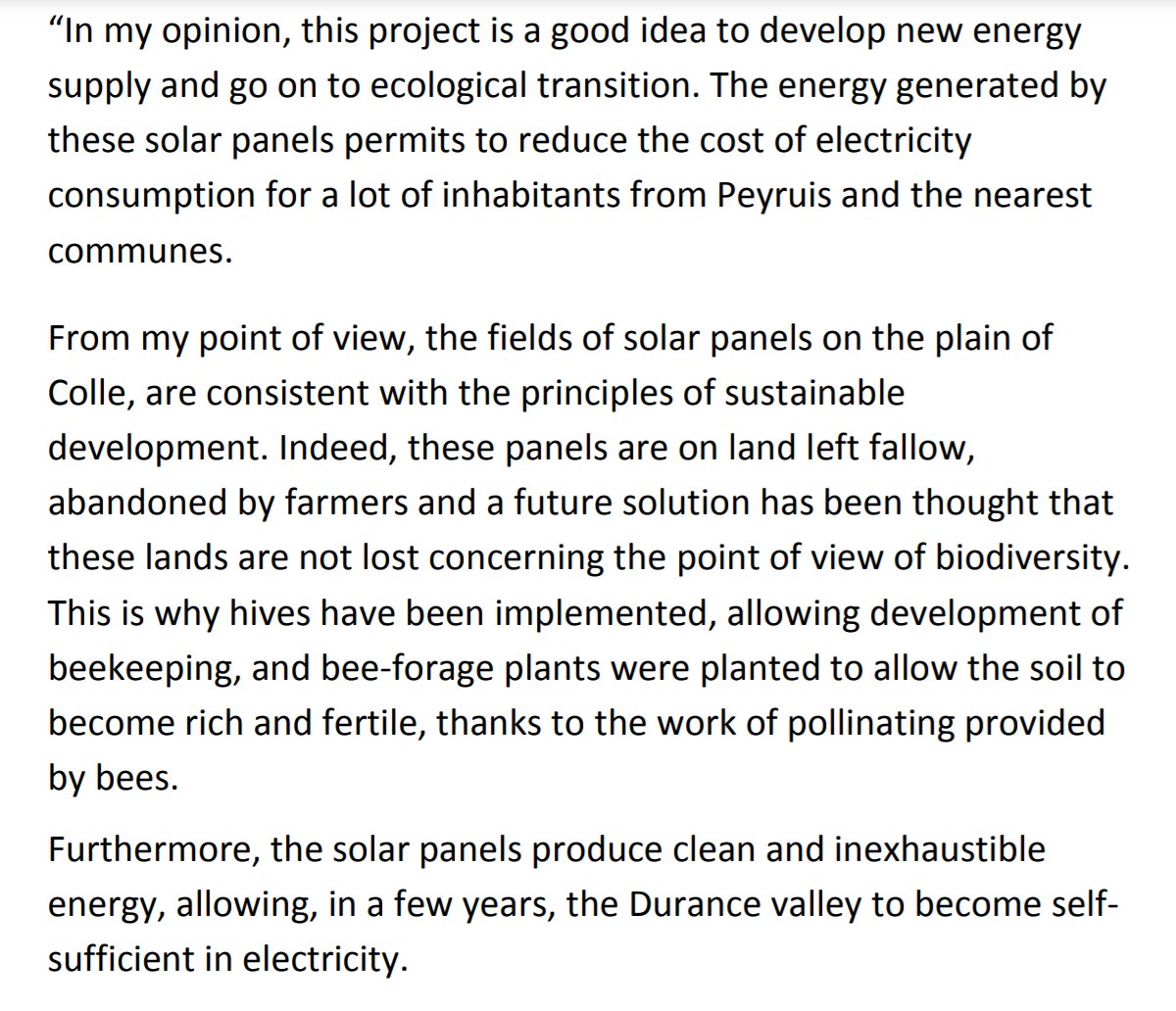 Of course, extracting energy *always* has some impact. But remember the argument here: Shellenberger and his kind want to present renewables as 'incurable' - each genuine challenge *cannot* be fixed. There is no way to do renewables right: 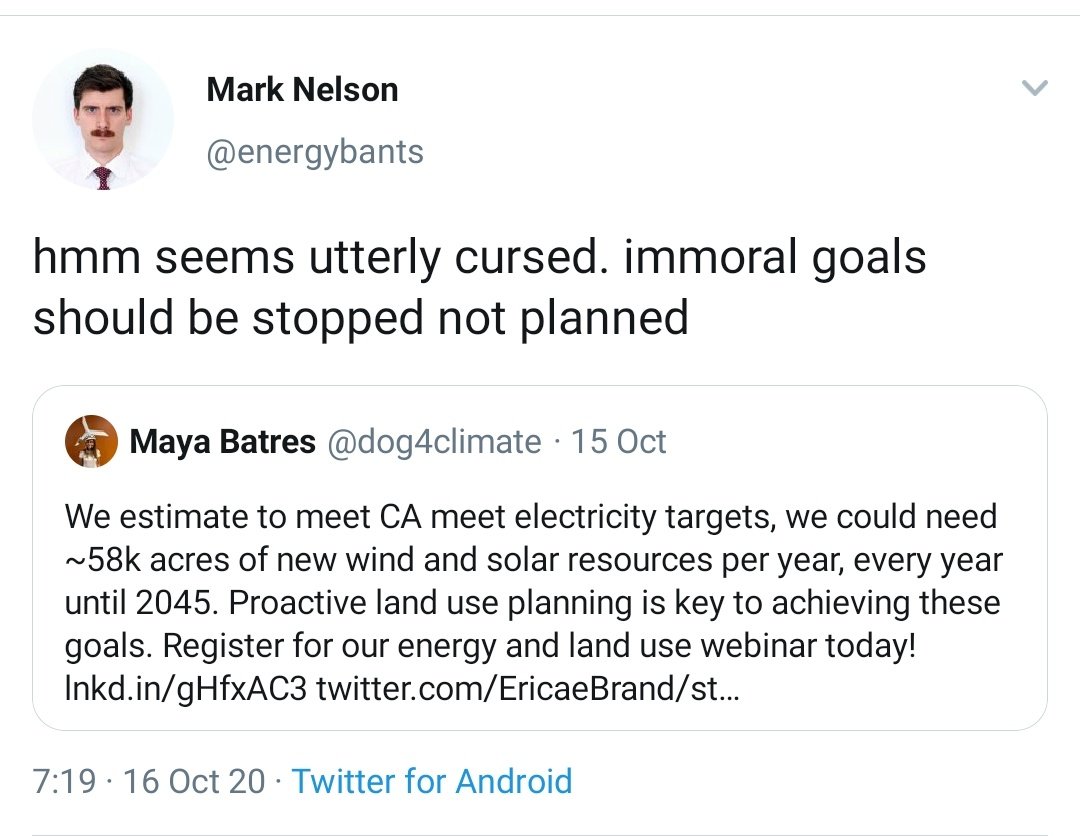 Of course, there *is* a way to do renewable energy right. It means taking local communities into account, sourcing materials responsibly (humans rights and environment), strict environmental protection, proper, planned grid integration and plenty of energy democracy.
There's a way to do nuclear power right, as well. No technology is ever inherently cursed: it all just mixes into a stew of social, cultural and political factors.

The absolute worst, most concern-trolling bad-faith actors see this nuance as their mortal enemy.
Shellenberger's anti-RE crowd operating on high emotionality 100% of the time becomes a pathway to erasing any hope of considering the possibility of, you know - actually building stuff in a respectful way, that doesn't hurt people or the environment. https://ketanjoshi.co/2020/07/05/why-an-attempt-to-gamergate-australian-climate-journalism-fell-flat/
Why an attempt to gamergate Australian climate journalism fell flat

If you missed gamergate, that’s nice, but you also really need to know about it. Here’s a summary: around 2014, a bunch of gamers got extremely mad at women who are journalists, because…

https://ketanjoshi.co/2020/07/05/why-an-attempt-to-gamergate-australian-climate-journalism-fell-flat/
It's not just him, of course. This "visualisation" of wind turbines went viral among pro-nuclear groups a few months back. It is precisely the same thing: an attempt to rouse an emotional response, but hidden in the language of "we're rationality ninjas" https://twitter.com/KetanJ0/status/1277296428071731205

Whether it's Michael Moore or Michael Shellenberger, you need to remember the heart of the argument here: are we capable of dealing with the challenges of the energy transition as they come, or are we too pathetic and incapable to figure things out?

(It's the first one obvs)
Good supplementary reading: @nature_org has a very recent report out on the fact that there are good projects and bad projects - and our decisions make the difference. 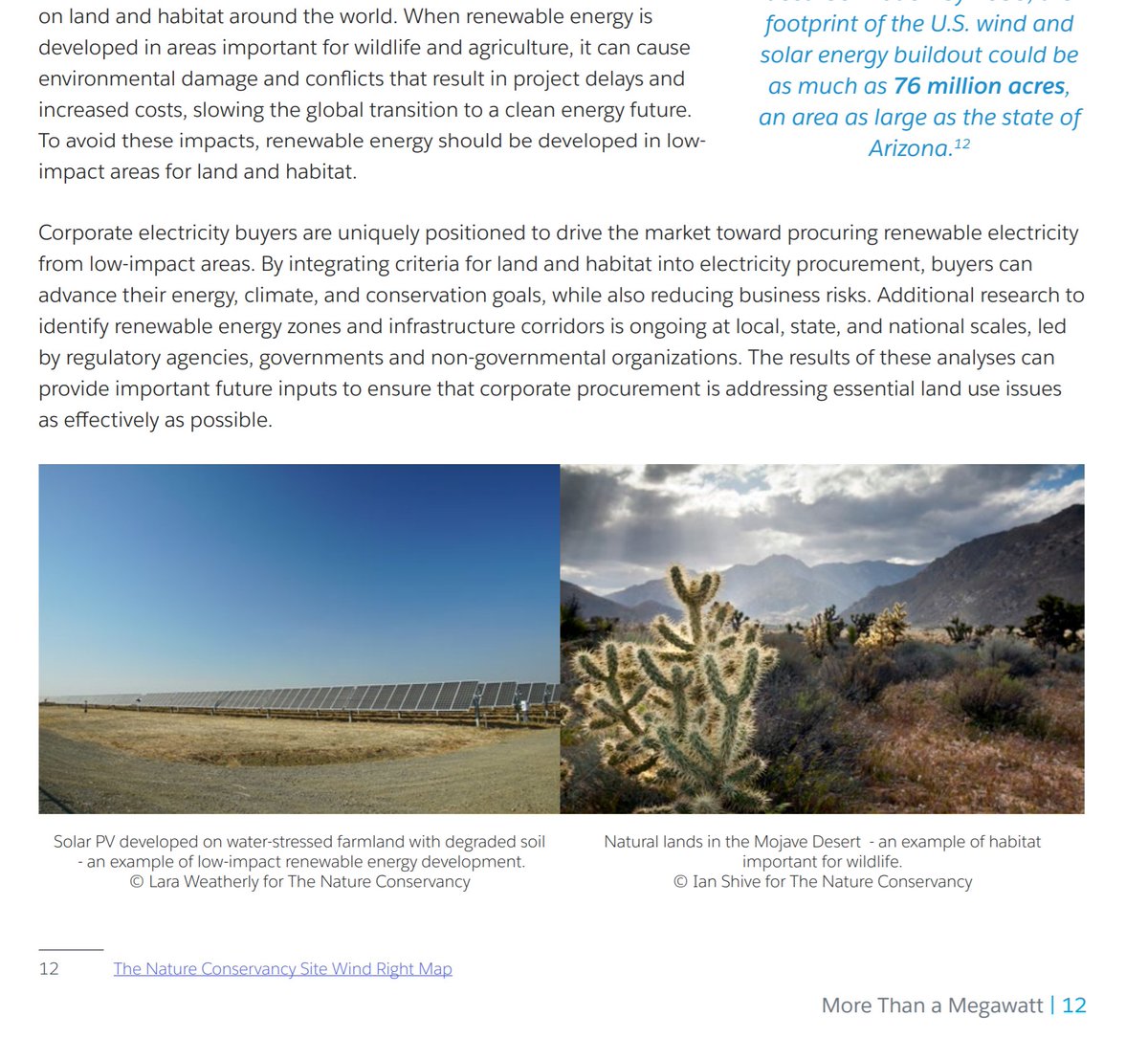 Anyway, it's important to remember the real winners here. Good work @AgBioWorld, you're doing a great service to us all. 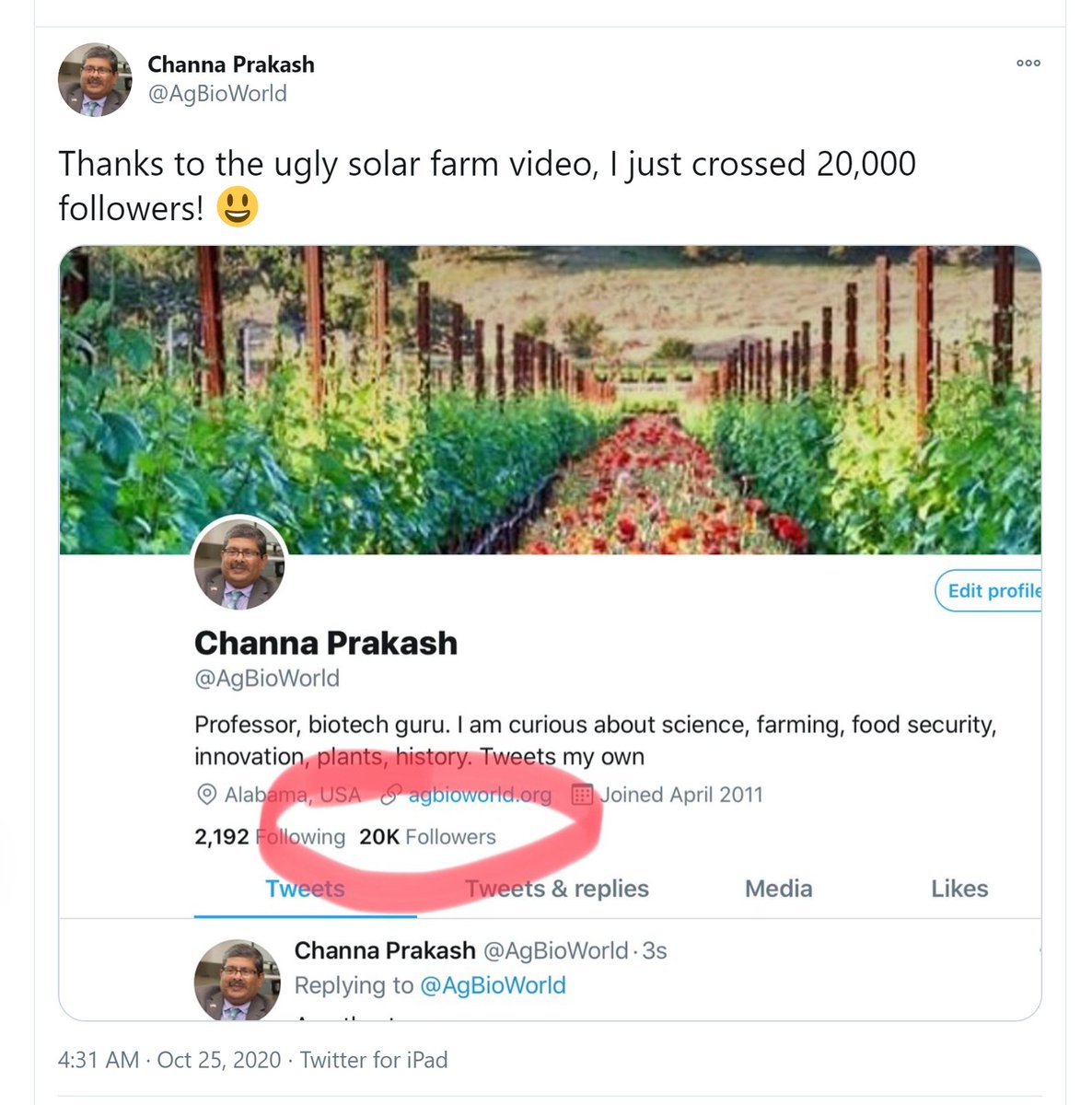 Wondering why @envprogress picked the Alta wind farm as its comparison to Diablo Canyon? Yep: old, big, and inefficient. These people *intentionally* choose the least-representative projects to maximise the terror and fear. 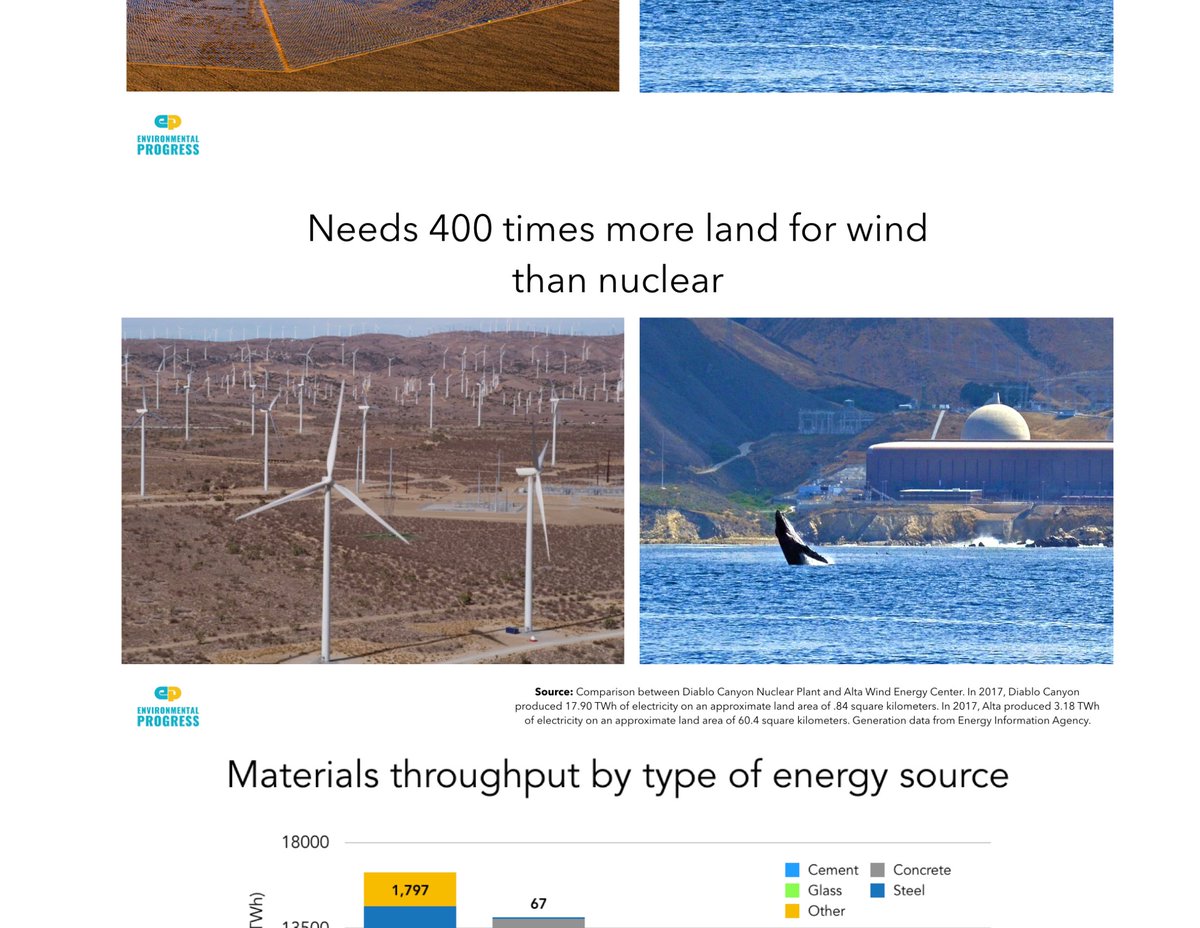 Appendix B: old mate AgBioWorld claims the Imgur video is Les Mees, but a friend has pointed out the video might actually be a very similar but less-nice-looking one? Obviously all the points still stand, but it's unclear which solar project this actually is. 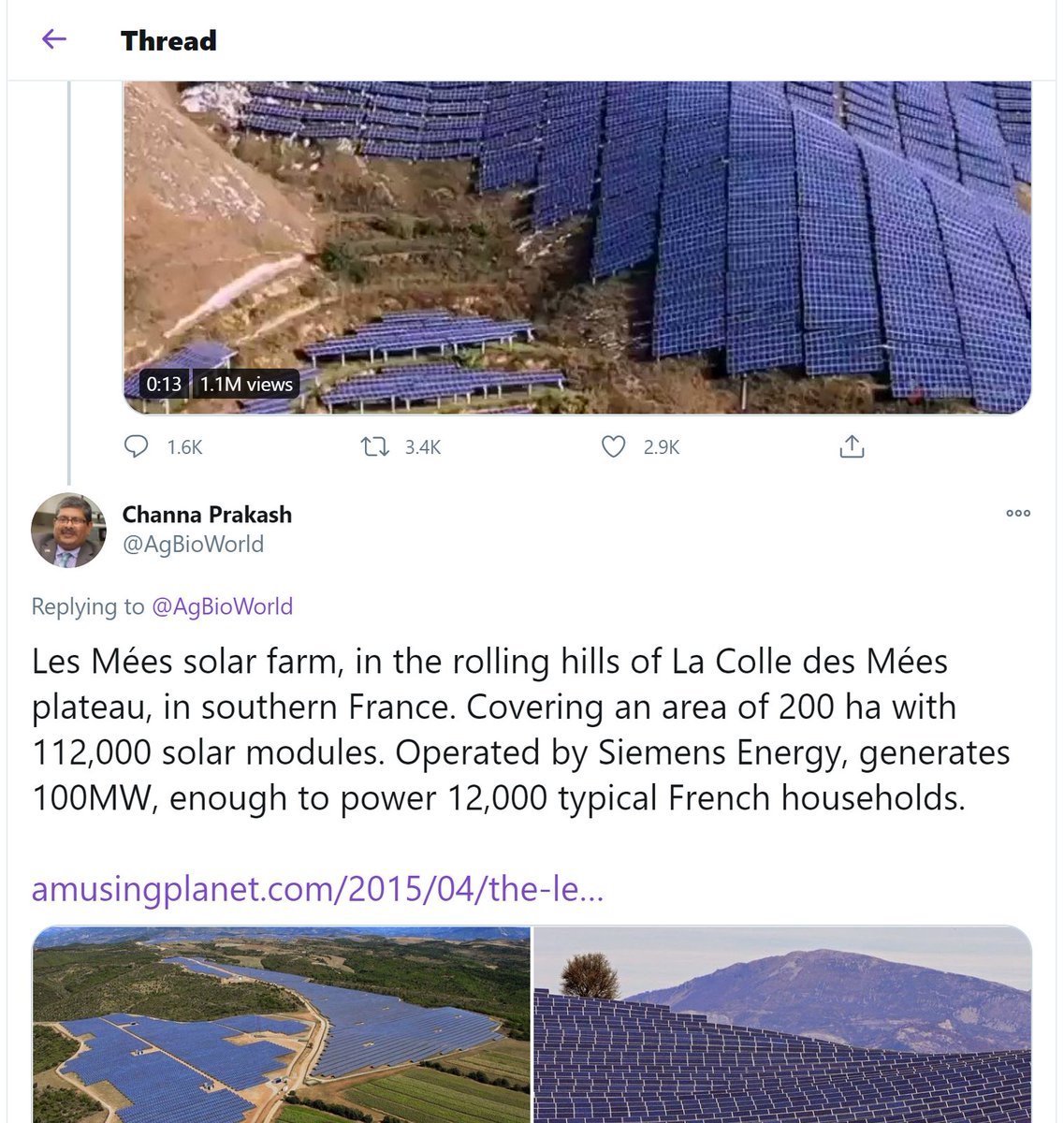