This is Parliament’s website for Treaties. I’m a big fan. I’m eagerly waiting the inclusion of yesterday’s UK/Japan trade deal

PS – its online already ( https://www.gov.uk/government/collections/uk-japan-comprehensive-economic-partnership-agreementon) if you can’t wait

Treaties are international agreements between states. The Constitutional Reform and Governance Act 2010 requires the Government to lay most treaties for Parliamentary scrutiny for at least 21 sitting...

https://treaties.parliament.uk/
As you can see, there’s a lot of treaties already on it. Including quite a few FTAs and Association Agreements signed over the last couple of years. These are the “roll-over” (or continuity) agreements. What are they..? 2/
As an EU member, we were party to many FTAs and other preferential agreements with non-EU countries. The UK has rightly been re-creating many of those since the Brexit referendum so that we don’t lose the arrangements we previously benefited from. 3/
Indeed, the Japan agreement is just one such “roll-over” – although there are some differences (which I’ll no doubt cover another time) between today’s UK/Japan agreement and the EU/Japan agreement (or Economic Partnership Agreement/EPA). 4/
It’s *interesting* to click through some of these treaties/trade deals which have been signed over the last couple of years. They have all been subject to the “CRAG” (Constitutional Reform and Governance Act 2010) arrangements for treaty ratification. 5/
If you do click through, you’ll see a pattern: Treaty gets tabled. It gets looked at (briefly) by one of the Lords EU Sub-Committees. They report. The Treaty gets ratified. Process takes a little over a month. The Commons appears entirely absent. This is Jordan, for example. 6/ 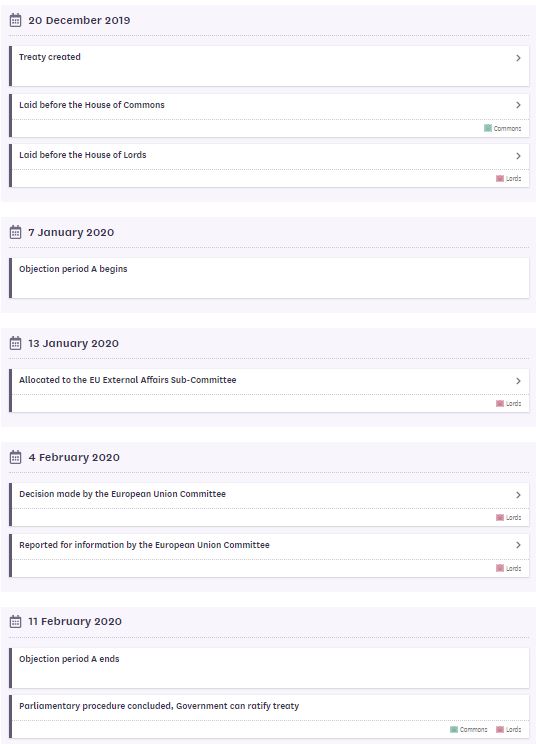 Occasionally Peers do have concerns and attempts to bring it to the attention of the House – as happened here with Morocco over the status of Western Sahara. Unfortunately, the CRAG timeline meant the debate actually happened AFTER the treaty was automatically ratified..! 7/ 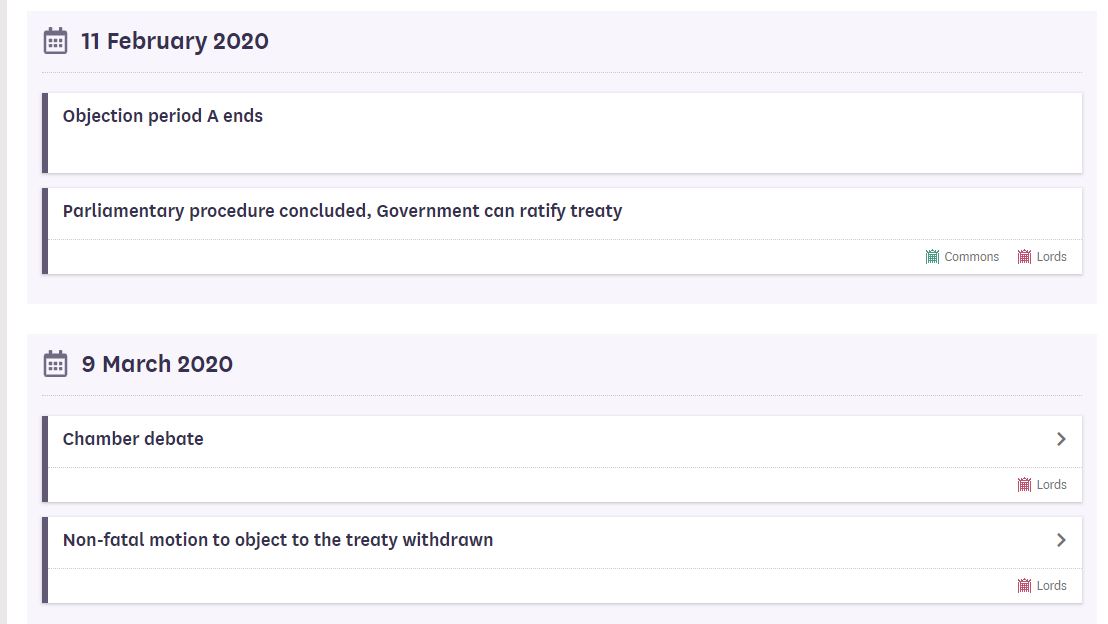 Actually, its worth reading Lord Stevenson’s speech during that very debate, on the process of treaty scrutiny and ratification….

This is the current system for trade deal scrutiny that exists and (as things stand) will continue to exist in future. 8/
As it happens, the Japan deal will receive a higher degree of scrutiny as the Trade Secretary has set out a process that involves additional involvement by the Lords International Agreements Committee and the Commons Trade Committee (which is good) 9/

https://hansard.parliament.uk/commons/2020-10-12/debates/20101231000012/UK-JapanComprehensiveEconomicPartnershipAgreementTransparencyAndScrutiny
However, this is not required, it is in the gift of the government. It also doesn’t mean there has to be any debate on the Japan deal in the Commons, whatever the Committees make of it. That’s a decision for the Leader of the House of Commons 10/
And there's no requirement for a vote to agree trade deal. Look again at the Treaties web page. They all become law automatically with almost no involvement from MPs. Idly clicking about, I happened upon last year’s agreement with the Faroe Islands. 11/ https://treaties.parliament.uk/treaty/J6vqV09f/CP-32/
Timeline - Treaty CP 32 - Treaties - UK Parliament

Timeline for Agreement, done at London on 31 January 2019, between the United Kingdom of Great Britain and Northern Ireland and the Kingdom of Denmark in respect of Free Trade with the Faroe Islands

https://treaties.parliament.uk/treaty/J6vqV09f/CP-32/
Interestingly, the EU Sub-Committee actually raised some concerns on this. Not my area of expertise, but apparently Scottish MPs and stakeholders may have wanted a closer look at the treaty with regard to fishing issues. 12/

One Scottish Peer proposed extending the scrutiny period (from 21 sitting days). But this didn’t happen. And again, MPs in the Commons appear to have been blissfully unaware, allowing the deal to be automatically ratified without any intervention whatsoever. 13/ 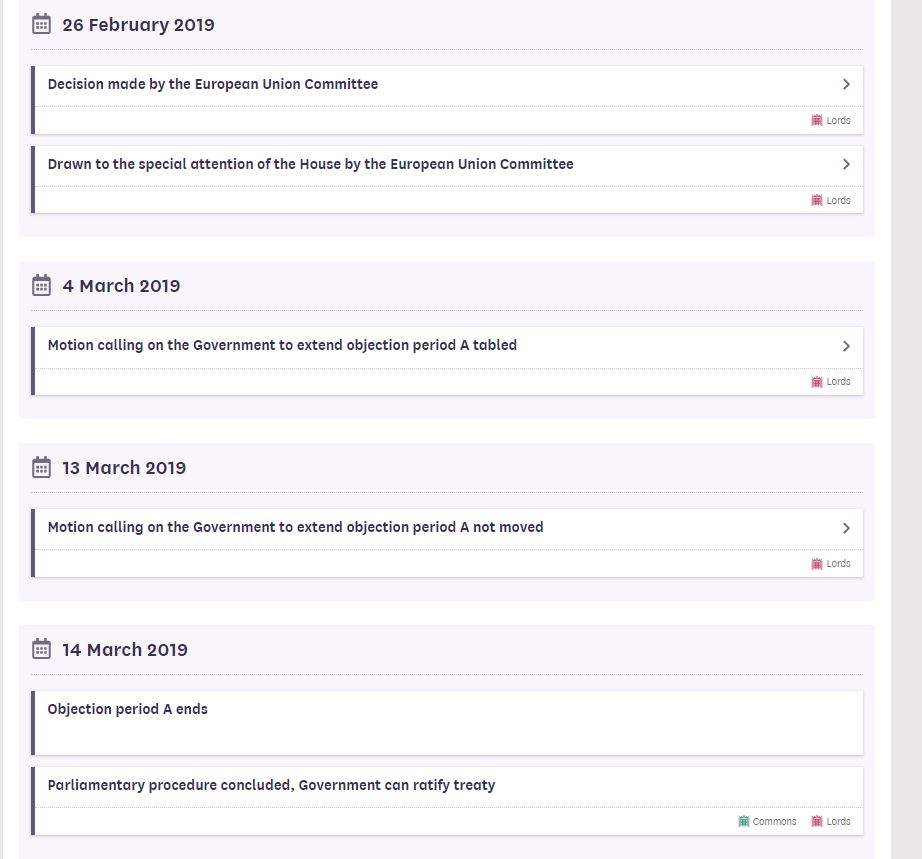 Now, one might have expected some Scottish MPs to have taken a closer look. Especially in light of this comment from a Scottish MP (with significant fishing interests in their constituency) last week on the Agriculture Bill about this very system of trade scrutiny 14/

Just to be perfectly clear – this “future” process, where Parliament will “scrutinise the Government and hold them to account” is the current process. It’s the process that applied to the Faroe Islands deal…. 15/
...the one that might – according to the EU sub-Committee - have adverse effects on this MP’s constituents. And so did he vote for that deal – no. Did he vote against it – no. Did he vote on it at all – no. Did he debate it – no. Indeed, one wonders if he noticed it at all…. 16/
I'm not here to name names or point fingers. What I am trying to emphasise is that there must be a big question mark over the level of understanding of the actual role MPs have when it comes to ratifying trade deals. 17/
Time and again we hear that MPs will not allow bad trade deals to be ratified. But the evidence of the last couple of years shows that there is almost no oversight at all by the House of Commons – *Under the Current and Future System* – of our trade deals 18/
Back to Lord Stevenson’s speech, where he provides a succinct explanation of this is important: modern trade deals have implications that reach into all aspects of our lives. 19/

But it was precisely a lack of democratic oversight over these sorts of issues that was one of the defining issues of the Brexit referendum - EU overreach into UK laws, decided by faceless bureaucrats and not our elected representatives. 20/
I worry we are meandering into exactly the same situation as we pivot away from our old trading relationship with the EU and do deals (with all the trade offs and concessions they involve) with other countries. 21/
The Trade Secretary’s recent commitment on more Parliamentary oversight is to be welcomed. But it's still weak and informal, and there's no requirement for a future SoS or future government to follow the precedent. Its in all our interests to improve scrutiny of trade deals. /end
You can follow @nvonwestenholz.
Tip: mention @twtextapp on a Twitter thread with the keyword “unroll” to get a link to it.